Playing in dynasty baseball leagues is the ultimate baseball fan’s dream, as it simulates being a general manager. Deep player pools, valuing Minor League players, rebuilding, and selling prospects to go for it all making playing dynasty baseball so fun. Dynasty leagues also create tough challenges on when to sell or cut players. While it is much easier to cut bait on a player in redraft, you have to think long term in dynasty leagues.

We are approaching the halfway point of the 2020 MLB season. Samples are small, and things have been weird, but trade deadlines are approaching in Fantasy. Its time to determine who you should buy and sell in your dynasty baseball leagues.

It has been several rough years for Corey Seager, who has dealt with many injuries over the last few seasons. Many forget Seager’s 2016 season, where he was the National League Rookie of the Year and finished third in the MVP voting. He was overlooked in 2020 Fantasy drafts amid a deep shortstop position and his dynasty value this preseason was lower than ever.

Now fully healthy, Seager is back and better than ever. In 82 plate appearances, Seager is hitting .316 with six home runs. Look deeper in Seager’s profile; he looks even better. His Baseball Savant page is off the charts in nearly every category. As if a .316 batting average is not good enough, his xBA is .389, and his wOBA and xSlG are .757 and .845, putting him in the 100th percentile among all hitters. His 37 batted balls of 95 mph or harder are second in baseball only behind Fernando Tatís Jr. 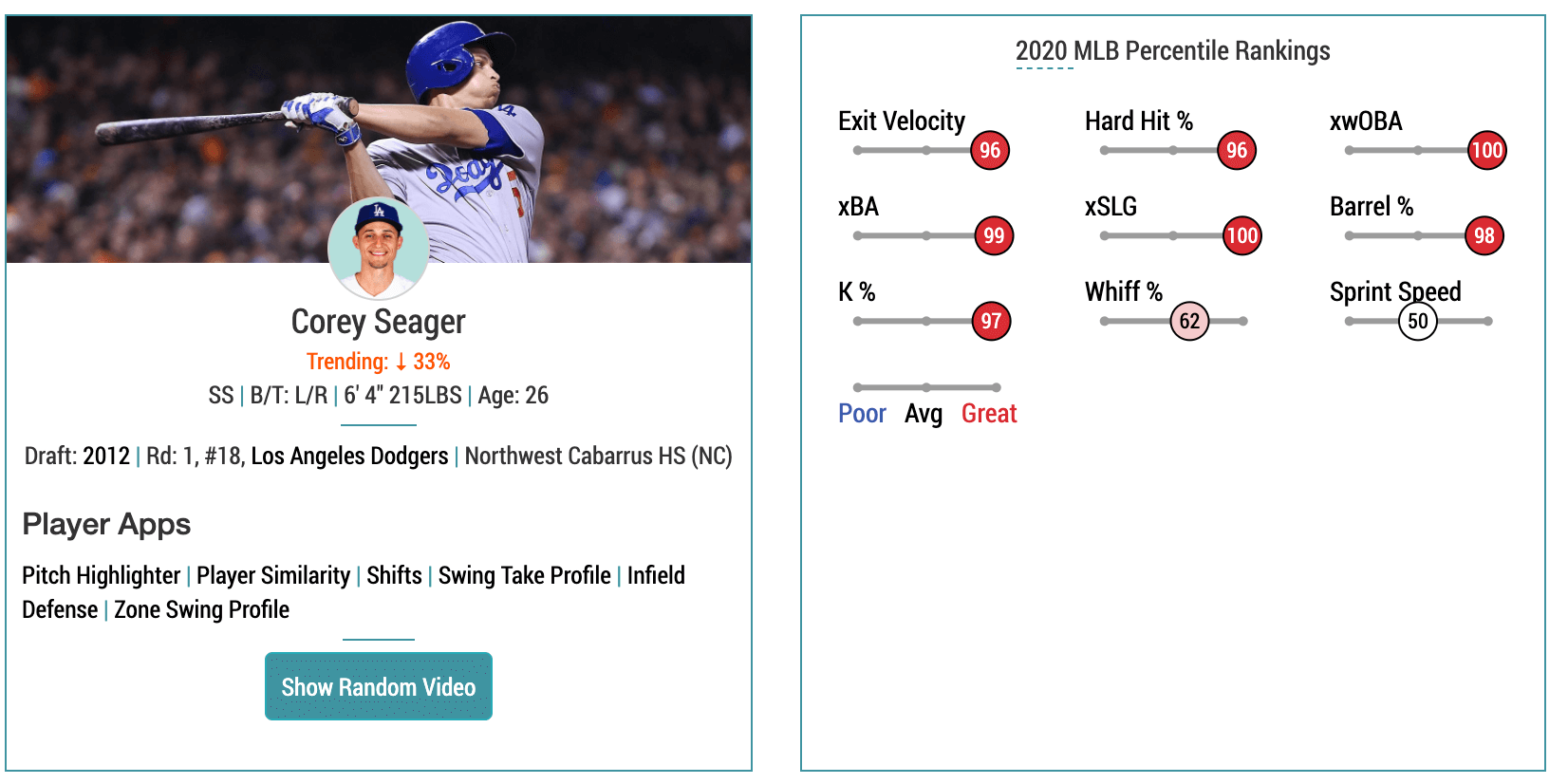 There is still a chance that Seager can be acquired in dynasty leagues for a reasonable price. He is still only 26 years old and has a ton of great baseball ahead of him. Once considered a second-round Fantasy talent, Seager had fallen well into the 100 range in most dynasty rankings before this season. He looks capable of regaining that high-end price, so now is the time buy. I would feel comfortable selling a player we mention later, Whit Merrifield for Seager in dynasty.

Jake Cronenworth was a fairly unknown two-way prospect when he was traded to the Padres in the Tommy Pham/Hunter Renfroe trade. The 26-year-old took Triple-A by storm last year with the Rays. A .334/.429/.520 slash line with ten home runs and 12 stolen bases earned him the starting shortstop position on the Triple-A all-star team.

While showing promise on the mound last year, Cronenworth has played every infield position for the Padres this season. He picked up right where he left off in 2019, with a slash line of .321/.387/.607. Much like Seager, Cronenworth’s expected stats are off the charts. His xBA, xwOBA, and xSLG are all 98th percentile or better among hitters. Croneneworth hits the ball hard, walks at a high rate, and has a 14.5 percent strikeout rate.

It is a great time to try to buy Jake Cronenworth or even explore if he is available on your waiver wire in shallower dynasty leagues. There is a good chance you can acquire him for reasonably cheap if his owner believes this is just a flukey start. He could grow into 15-20 home run power over a full season with ten-15 steal potential. A robust hit tool and great glove and arm give him a good chance to stick in the Padres lineup, have multi-position eligibility, and be an under-the-radar dynasty asset for many years to come.

The Mariner’s former first-round pick Kyle Lewis is finally living up to his potential. The 25-year-old is off to a great start to 2020 with a .344 batting average and five home runs and two stolen bases in 104 plate appearances. Lewis has become a hot commodity in dynasty leagues, and now could be a great time to sell high.

Looking deeper into his profile, Lewis has some concerning numbers. First, a .433 BABIP is sure to see regression and drag his batting average down. Lewis’s best full season in the minor leagues he hit .263, and that is probably his expectation moving forward. His launch angle is also low at seven degrees, with 44.6 percent of his batted balls being grounders. 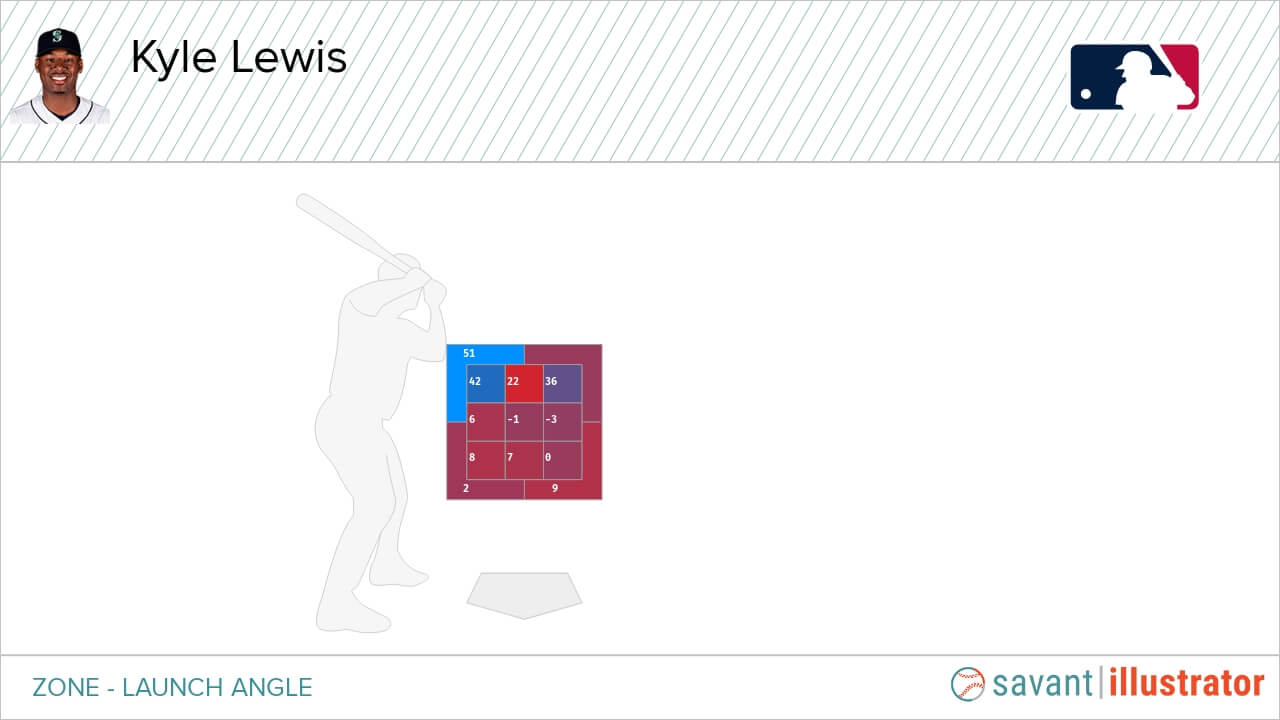 While his strikeout rate looks modest right now at 25 percent, there is significant swing-and-miss potential here. Lewis was striking our nearly 40 percent of the time through 50 plate appearances in 2020. He also is not hitting the ball hard with an exit velocity of 86.9 mph and a hard-hit rate of 29.2 percent.

Lewis is a prime sell-high candidate, and despite many fantasy players knowing this, there are still many out there buying into his hot start. Lewis is still young, and his appealing stat line could net you a substantial return in dynasty leagues. Regression is coming for Lewis, so get out now if you can.

Many Fantasy Baseball analysts faded Merrifield before 2020 due to him being considered a compiler. Having the second-most plate appearances between 2018 and 2019 enabled him to compile stats and be valuable in Fantasy. In a shortened season, many expected him not to be able to collect the plate appearances necessary to be worth his ADP.

Merrifield is continuing to prove the doubters wrong, hitting .300 with five home runs and two stolen bases. Much of Merrifield’s value comes from his steals as he led the league in 2018 with 45. He only stole 20 in 2019, which concerned many dynasty owners. He will hit for a high average, but the home run power is modest at best. Merrifield will be 32 years old next season, and his stolen bases are already declining. Once the steals go, he will lose a ton of Fantasy value.

Now is the time to sell Merrifield while the value is still good. He likely will not sustain his power as a high HR/FB rate is nearly double his career average. If someone needs help at second base, Merrifield could be enticing. It is possible to net a solid prospect package or a young major league talent in return for Merrifield.

The window to buy Zac Gallen in dynasty baseball leagues is closing fast. To begin his career, Gallen has made 20 starts and has not allowed more than three earned runs in any of them. His career ERA now sits at 2.70 after 110 innings pitched. I have said before, and I will repeat it, Zac Gallen is a budding ace. Jake Devereaux’s “Dynasty Starting Pitcher Rankings for August” had Gallen ranked 23rd. I would not surprise to see him move up toward the top 15 range in next months report.

Through five starts in 2020, Gallen has struck out 36 batters in 30 innings and has a 2.40 ERA. Watching him pitch, he legitimately looks like an ace. His arsenal has four pitches that he throws at least 19.8 percent of the time or more. His four pitches; a four-seam, cutter, curveball, and changeup each have aspects that make them solid pitches.

Gallen’s batted ball profile is also very appealing on top of his high strikeout numbers. He is inducing a 50 percent ground ball rate while allowing fly balls at just a 13.5 percent rate. Of qualified pitchers, Gallen ranks 13th in hard minus soft contact rate which, coupled with his high strikeout rate of 30.3 percent, suggests Gallen will continue his success.

Zac Gallen is a high-end SP2 with a high probability of being an ace, so now is the time to buy. His value will likely only increase throughout the year, so if you want to get him in dynasty leagues before his value skyrockets, do it now.

Max Fried is carrying a lot of weight on his shoulders as the only productive Braves starter. Fried’s upside has long been known, dating back to high school, which led him to be the seventh overall pick in the 2012 draft by the San Diego Padres. Fried was traded to the Braves in December of 2014 in a deal that sent Justin Upton to the Padres. Injuries have limited Fried, but after a solid 2019 season, he looks ready to breakout in 2020.

Fried is only 26 years old and is just entering his prime and making him an excellent buy in dynasty baseball leagues. In five starts this season, Fried has a 1.24 ERA and a 0.90 WHIP with 28 strikeouts. Statcast data supports Fried’s hot start, as he has one of the lowest exit velocities among starters at 83.6 mph. Some will argue that pitchers cannot own the skill of inducing soft contact or low exit velocities. I believe it is a skill pitchers can have. 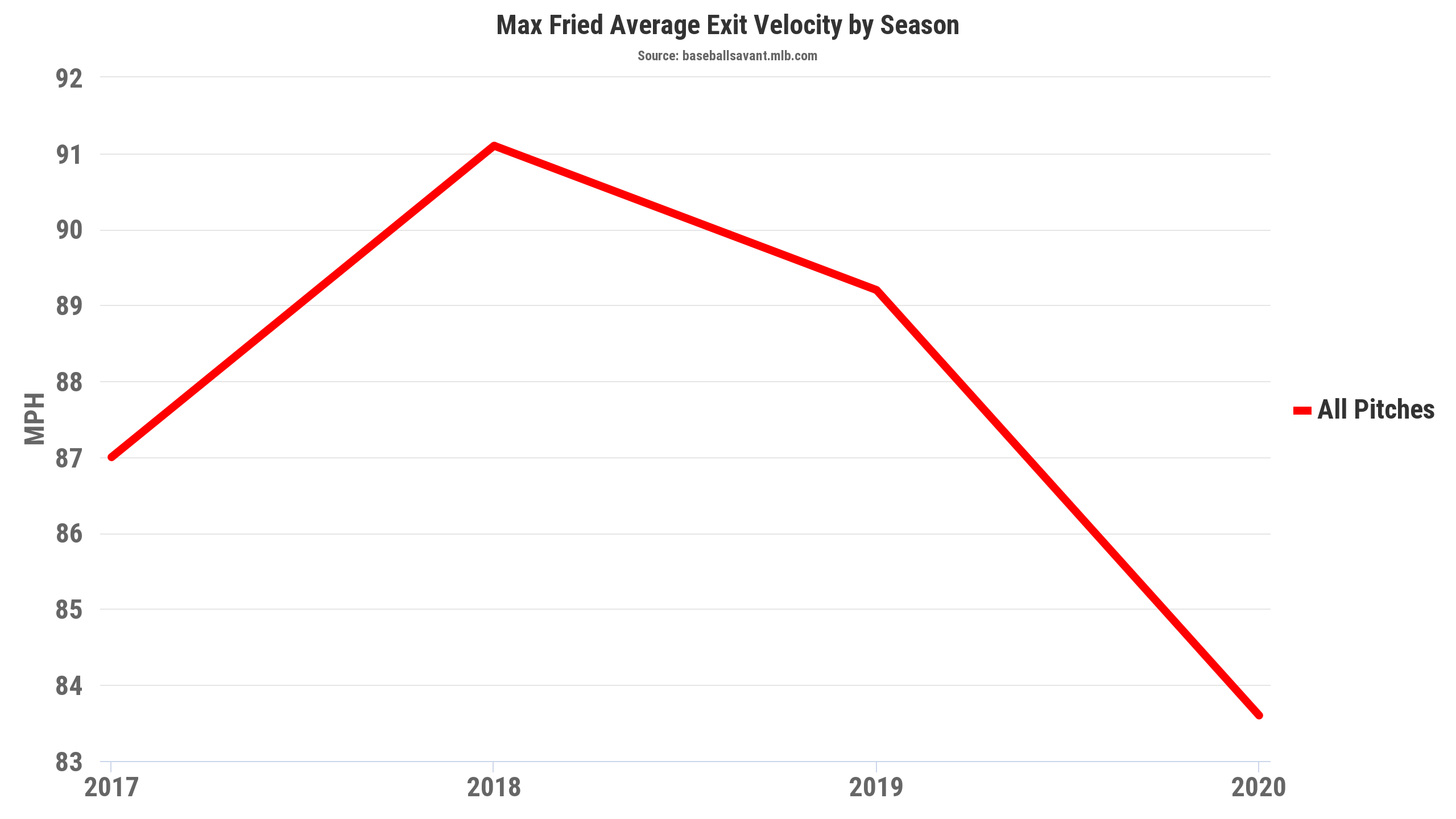 Fried ranks tenth among starter in hard minus soft contact percent while inducing groundballs at a 59.2 percent rate. With a good batted ball profile and a solid strikeout rate, Fried is setting himself up for success. He will likely have some ERA regression due to his .239 BABIP and 85.7 percent strand rate. But even with some regression, Fried will still be a high end starting pitcher. His FIP of 2.33 suggests that he has pitched a little over his head, but everyone knows that a 1.24 ERA is unsustainable. Regardless, Fried is a pitcher that I want to own everywhere in dynasty leagues.

Except for one poor start against the Brewers, Gray has arguably been one of the best pitchers in baseball. A crazy 37.2 percent strikeout rate has helped Gray pitch to a 2.05 ERA in 30.2 innings. Gray has also seen his walk rate drop bear nearly two percent from last season. Overall, it has been a great start to 2020 for Gray.

Gray’s BABIP of .258 will see some regression, but nothing else in the profile screams regression. It is hard to imagine Gray’s strikeout rate stays this high, though. Gray was excellent in 2019, and his strong start in 2020 has done nothing but raise his value. The issue for me is Gray’s poor 2016 and 2018 seasons. For this reason, I would prefer to own a more reliable starting pitcher. Now is a great time to sell in dynasty leagues because Gray is 30 years old, and his value has likely never been higher. There is a strong possibility you could acquire a younger and more reliable starter for Gray right now.

The 2020 version of Trevor Bauer looks like an ace once again. While most pitchers are using fastballs less, Bauer is using it more, over 50 percent of the time. It has been his most dominant pitch, though, striking out 17 hitters and having the highest spin rate of any fastball in the majors. That pitch has a .157 xwOBA against, and Bauer’s overall xwOBA is .165.

With a 46.4 percent strikeout rate and only a 5.8 percent walk rate, Bauer’s K-BB% is the highest in baseball. His statcast page is filled with nothing but red numbers, which is good! While there are plenty of reasons to be excited about Bauer, I want to pump the breaks a little. After the first month of the 2019 season, Bauer was off to a similarly hot start. He finished the season with a 4.48 ERA. In a shortened 2020 season, it is unlikely he ends the year that poorly, but his hot start creates a good selling opportunity. Bauer is known to tinker with his pitches and be a bit volatile. He could blow up at any moment and his value tank. Bauer could fetch a significant return in a dynasty league trade, so feel out your league and see what you could get in return.

Struggling to understand how a certain player’s injury will impact them in Fantasy Baseball? Nic Civale wrote a detailed “Injury Report” that is very helpful to Fantasy owners. Check it out!