It’s the love/hate relationship you really love to hate: closers! With a good two and a half months left until Opening Day, now is as good a time as any to start breaking down some bullpen arms ahead of your draft. This series will detail every division across the league, offering you the big names you’ll want to own, as well as the sleepers you need to keep an eye on, and of course some key stats to better prepare you for the big day. Next up, we take a look at the NL East.

Must Own: Arodys Vizcaino

Money to spend and a postseason push on their mind, that’s the Atlanta Braves in a nutshell right now. The catch is that GM Alex Anthopolous hasn’t spent a dime upgrading the bullpen, and with former veteran closer Jim Johnson now gone, everything hangs on Arodys Vizcaino to pick up the slack. Fortunately, the Braves might be in good hands with the 27-year-old righty, as Vizcaino converted 12 of his 13 save opportunities after relieving Johnson of the closer role last August.

For fantasy owners, I still think the jury is out on Vizcaino, but he’s starting to become a trendy pick. He packs a consistent 86 MPH curveball that generated 49 strikeouts last season, but there are a few areas of concern surrounding his fastball, a pitch he threw 80% of the time on 0-0 counts. Velocity-wise, it’s great — you can’t complain about 98 MPH. However, both right- and left-handed batters hit .290 or better against the pitch in 2017.

Walks could potentially become Vizcaino’s ultimate undoing in a full season as closer. His 3.30 BB/9 last season came in just 0.7 points below the league average, but 17 of his 21 walks were against left-handed hitters, which resulted in an ugly 6.3 BB/9 against them. Fastball command is an issue that needs correcting this spring, particularly against lefties, but since both Jose Ramirez and A.J. Minter have their own troubles, Vizcaino is safe in the closer role for now.

Diamond in the Rough: A.J. Minter

Small sample sizes are pretty pointless, but Minter’s certainly makes you wonder. He recorded 26 strikeouts in just 16 games in 2017, and with the lefty entering his first full season in the Majors, he figures to slot in as the Braves’ set-up man. It’s easy to forget about Minter with guys like Max Fried and Jose Ramirez in the pen, but the 24-year-old was one of Atlanta’s top 20 prospects last season for a reason. There’s certainly no fantasy relevance just yet, but Minter is a name to watch if the Braves bullpen hits turbulence. If he can string together some innings of consistency, he very well could be in the closer conversation.

Must Own: Brad Ziegler

Be prepared for the barnacles that come attached to Brad Ziegler. There’s no doubt that the Marlins’ closer position is up for grabs this spring, but the stats above don’t lie: The Marlins’ bullpen was flogged last season. In large part due to the starting rotation’s inefficiency, Miami’s relief pitchers combined to throw the most bullpen innings in the Majors (612), likely forcing Don Mattingly to role with eight arms ahead of Opening Day.

There are a lot of unproven arms in this pen that have little to no experience in high-leverage situations, and even though Ziegler is now 38, he’s not exactly the most reliable veteran, either. The pros: Ziegler converted 10 of his 16 save opportunities after replacing A.J. Ramos in the second half last season. The cons? Two DL stints, plus a crazy-high 89% contact rate on his slider that also allowed a .301 AVG against. The sidearm thrower is hardly a “must own,” but for this article’s sake, Ziegler is probably the only semi-proven name in the Marlins’ bullpen, even if he is just a holdover for the next up-and-comer.

Diamond in the Rough: Drew Steckenrider

A year ago, Kyle Barraclough found himself in this very spotlight, and you could probably make a sleeper case for him once again. Realistically, though, Steckenrider might have an even bigger chance at opening the season as the closer, and since he recorded 54 strikeouts in 34.2 innings last year, it’s not hard to see why. Steckenrider falls into the category of “big-arm guys,” capable of throwing a 98 MPH four-seamer that continues to generate plenty of swings and misses. In comparison to Barraclough, this is one area where Steckenrider has a leg up, and once again, the stats don’t lie: 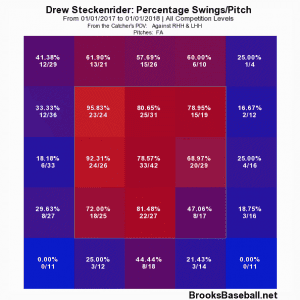 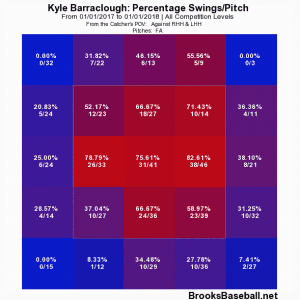 Both Barraclough and Steckenrider love to throw their fastballs over the middle of the plate, but it’s clear Steckenrider saw greater swing-and-miss success last season. Barraclough certainly has the velocity to close, but he lacks the command required. It’s pretty safe to say the Marlins knew what they had in Steckenrider since the very beginning, and with some power behind his pitches and improving command, it’s time fantasy owners take him seriously.

Must Own: Jeurys Familia

The slope certainly got slippery after the Mets found out Familia would miss most of 2017 after undergoing blood clot surgery. There’s a lot of “what ifs” to debate here, but I for one think it’s worth rolling the dice on Familia to bounce back. Mickey Callaway seems intent on a closer-by-committee situation in New York this year, but if the Angels taught us anything last season, it’s that uncertainty in a bullpen can cause chaos.

I guess there’s no reason to knock Callaway’s strategy just yet, as it allows the Mets to play matchups and not risk another long and costworthy injury list. As for Familia, a year away from the mound presents challenges, but are we really ready to forget about his 2016 season? He finished with a 2.55 ERA and 84 strikeouts across 74.2 innings, notching 51 saves in the process. The other good news is owners can pick him up late. 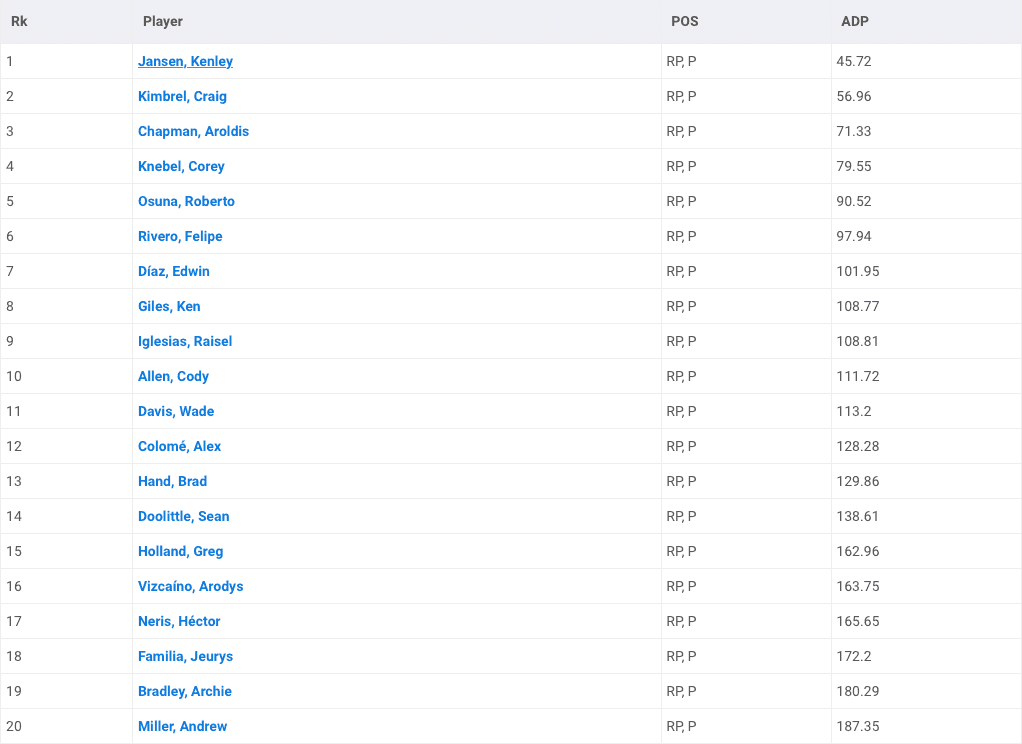 I do get the feeling Familia’s leash is rather short with Anthony Swarzak in the background, but if he can return to 2016 form, his Fantrax ADP of 172.2 makes him a steal.

Diamond in the Rough: Jerry Blevins

Swarzak is a trendy pick for all the right reasons, but you can’t overlook one of the scariest looking southpaws in the Mets’ pen. Blevins is a short distance away from the closer role just yet, but he could figure in as a viable setup option this season. The lefty had a .195 AVG against when facing left-handed hitters last year and allowed multiple hits in just seven of the 49 innings he pitched. Blevins seems to have a keen attitude ahead of spring, telling Newsday.com, “If you want me to get righties out, give me some time in the offseason to prepare for that.” Blevins allowed only 19 hits vs. righties last year, but four of them were home runs. If he can in fact alter his approach in exhibition games, we could see something special.

Must Own: Hector Neris

Stop me if you’ve heard this one before. Just like the Marlins, the majority of the Phillies’ bullpen troubles came as a direct result of a rather inexperienced/useless starting rotation. And just like the Mets, manager Gabe Kapler isn’t assigning any set roles heading into Spring Training, a clever move after adding Pat Neshek and Tommy Hunter earlier this offseason.

Owning shares in the Phillies pen comes with strings attached, and Hector Neris is living proof. We’re still in this weird phase where we don’t know if Neris is “the guy,” or if he’s just the next bullpen casualty disguised as a closer. Either way, it does appear Neris has developed a bit of an identity with his splitter, a pitch he looked to have abandoned early last year. The 28-year-old suddenly fell back in love with his fastball in April, but after that dream failed, Neris returned to his splitter with great success — 68 strikeouts and only three home runs allowed. Those numbers helped Neris notch a career-high 26 saves and a 3.01 ERA, but, of course, there are two sides to every story.

For every bit of optimism, there’s just as much inconsistency with Neris. Leading 5-2 in the 9th against the Dodgers, Neris gave up back-to-back home runs to Yasiel Puig and Cody Bellinger last April, eventually losing the game 6-5. Similar happenings occurred against the Giants in August, making every owner wonder just how trustworthy Neris really is. A lot of those problems boil down to leaving his splitter high in the zone far too often, and with the rest of Philadelphia’s pitching staff having concerns of their own, Neris remains high on my hypothetical “Do Not Draft List.”

Diamond in the Rough: Edubray Ramos

The Phillies should take eight relievers into the regular season, and although Philadelphia’s bullpen looked amateurish as a unit last year, there’s enough talent on this roster to really surprise. Phillies fans had seemingly given up on the young righty following a demotion back to Triple-A last year, but Ramos stormed home with a 29.3% strikeout rate upon his return to the Majors. So what gives? Ramos simply decided to cool it on his fastball, instead opting to throw his slider 13% more than he did in 2016. That basic change in pitch selection created more swings and misses as the season went on, eventually tallying 62 total strikeouts. Ramos might not factor into Kapler’s bullpen plans all the time, but he does hold some middle-relief potential.

Must Own: Sean Doolittle

Sean Doolittle is a crowd favorite, but how long is the lefty’s leash? You could make a case for any of the Nationals’ top bullpen arms here, but Doolittle’s 5.1% walk rate (his lowest since 2014) certainly makes him a popular pick. The one problem that does stand out is Doolittle’s inexperience in the closer role. Don’t get me wrong, he’s done this once or twice before, but Doolittle has never spent a full season as the closer. And with two other names chomping at the bit, it wouldn’t be the least bit surprising to see him challenged in April.

Converting 21 saves in 30 appearances for the Nationals last year, Doolittle is the leading man for the time being. He posted a swinging strike rate above 15% for the second consecutive season, and also allowed a career-low hard contact rate (20.9%). It does appear the 31-year-old won’t come cheap, however, his current ADP stands at 140.13, ahead of guys like Greg Holland and Andrew Miller.

Diamond in the Rough: Koda Glover

Small sample sizes and injury concerns aside, Glover struck out nearly a batter per inning in April/May last year with excellent control before a shoulder injury shut him down in June. The good news here is that Glover isn’t a fastball-first kinda guy, because if he were, there would be even more reason to worry about his back/rotator cuff. Fortunately, Glover is all about the slider, a pitch that gave up just nine hits in the first three months of last season. Taking a chance on an unproven 24-year-old with a long and extensive injury history seems scary, but just keep in mind how in love the Nats were with this kid. Do you really think they’re ready to give up on all that?