It’s the love/hate relationship you really love to hate: closers! With a good two and a half months left until Opening Day, now is as good a time as any to start breaking down some bullpen arms ahead of your draft. This series will detail every division across the league, offering you the big names you’ll want to own, as well as the sleepers you need to keep an eye on, and of course some key stats to better prepare you for the big day. Next up, we take a look at the AL West.

Must Own: Ken Giles

I don’t like to make a fuss over small sample sizes, but what do we make of Ken Giles after that horrific postseason? He allowed five walks, 12 hits, and 10 earned runs in the 7.2 innings he pitched during the Astros’ championship run, failing to see the field in Games 5, 6, and 7 in the World Series. Without overstating the obvious, Giles’ ERA was mighty crooked during October, but his regular season certainly held plenty of positives. Giles finished 34 of his 38 save opportunities while also holding both right- and left-handed batters to a sub-.200 batting average. However, despite a tidy 2.30 ERA, there’s no denying the glaring issues found in his batted ball profile.

Back in 2016, I remember the rant/rave surrounding Giles’ slider. It was a pitch the 27-year-old never really “had” up until he joined the Astros organization, and after a 102-strikeout season, we all had high hopes for similar numbers entering 2017. If you’re wondering why Giles looked so plain during the postseason, here’s your culprit: Giles’ outside contact rate ballooned from 39.3% to 47.1% between the two seasons, and all of that is due to simple slider location. In 2016, Giles loved throwing his slider down and away, 50.7% of the time, to be exact. In 2017, however, that number was reduced to 41.5%, indicating the pitch was not only less effective, but that there may be some minor mechanical flaws that need ironing out this spring.

Since Giles pitched in only a handful of games during the postseason, you could take all of this with a grain of salt. He’s still extremely fantasy relevant, but after the Astros had 30 losses by just two runs or fewer last season, it might be in Giles’ best interest (and owners’ best interest) for him to correct his swing-and-miss stuff quickly.

Diamond in the Rough: Brad Peacock

The Gerrit Cole deal helps everyone except Brad Peacock. The 29-year-old will likely spend a lot more time in the bullpen this season, which should make fantasy owners smile considering his multi-inning durability. I know what you’re thinking: “Seven earned runs during the postseason, umm, no thanks.” Rest assured, Peacock does hold some value as a potential relief pitcher. Likely to fit in as a setup man behind Chris Devenski, Peacock’s 95 MPH fastball makes him a weapon, and his career-best 11.0 K/9 last season makes him enticing from a fantasy perspective.

Must Own: Blake Parker

You can bet your house there will be some kind of Spring Training battle in Los Angeles this year, just like you can probably bet your life savings Cam Bedrosian will wind up hurt again. Injuries suck, but fortunately, the Angels have 32-year-old Blake Parker to fall back on, and that ain’t such a bad thing. Finishing with a 2.54 ERA last season (that’s better than Dellin Betances and Edwin Diaz, by the way), Parker is the likely option for Mike Scioscia seeking some stability early on. Parker wound up with a career-high 86 strikeouts and a tidy 6.3% walk rate last year, but that’s only scratching the surface of what was an impressive 71-game season.

It might seem odd to focus on Parker’s pull percentage, but 40.4 percent really stood out to me as I flicked through his batted-ball profile. After diving into Parker’s pitch splits, I quickly realized he’d fallen back in love with his splitter, throwing it 33% of the time (a career high). That decision led to 54 strikeouts, the highest total of any single pitch he’s ever thrown, but it also shone some light on that rather high pull rate.

In the first half of the season, Parker allowed a total of 28 hits, while in the second half he allowed just 12. Not a huge difference, but his AVG exit velocity tells a different story. His 50 Batted Ball Rolling Average-Exit Velocity has continued to drop significantly, now sitting around 83 MPH.

Parker’s spray chart is nothing out of the ordinary, either, but his pull percentage does indicate that his off-speed stuff is creating problems for hitters. Less surprisingly, it also indicates that Angel Stadium is crazy pitcher-friendly. Who knew?

Diamond in the Rough: Keynan Middleton

It was around the time Keynan Middleton stared down Cody Bellinger that I began to notice the Angels righty. With that said, 17 multi-strikeout games in his first year in the bigs certainly doesn’t go unnoticed. The Angels’ bullpen is now chock-full of depth again thanks to the addition of Jim Johnson, so Middleton will be bogged down a little on the roster. Don’t forget Scioscia did trust Middleton with the closer role a few times last season, though, so should the injury bug bite, don’t be surprised if we see him in some high-leverage innings going forward.

Must Own: Blake Treinen

There’s a little more to Blake Treinen than meets the eye. Obviously, the 29-year-old is far from a “must own,” but there’s some sneaky sleeper value to be had here if you know where to look. Treinen converted 11 straight save opportunities last season, winding up with 16 in total. Okay, after pitching 24 high-leverage innings in 2017, Oakland’s lack of offense makes him a super tough own. But the good news is, Treinen is back in love with his change-up, a pitch that wreaked havoc on hitters last season.

After deserting his off-speed stuff in 2015, Treinen’s 44.4% contact rate on his change-up was the lowest of any pitch he’s thrown throughout his four-year career. Treinen struggled big time against lefties last year, surrendering a .370 wOBA and five home runs in 30.1 innings. Banking on repeat success with his change-up is risky, but with the closer role likely secured entering Opening Day, it could rack up some saves and strikeouts.

Diamond in the Rough: Yusmeiro Petit

The A’s bullpen has a smorgasbord of prospects that could easily make the cut. Bobby Wahl, Miguel Romero, Nolan Blackwood, and even starting pitcher A.J. Puk are worth watching both this season and next. So why have I gone for Petit here? Yeah, a 33-year-old arm might sound alarm bells, but Petit’s numbers are actually, well … good. His HR/9 declined to 0.89 last season, while his K/9 soared to the highest it’s been since his San Francisco Giants glory days: 9.95. Rarely reaching the 90s, you already know Petit’s fastball isn’t super quick, but just keep in mind, this is the same pitcher that nearly threw a perfect game back in 2013.

Oakland could really do with a lefty reliever, and if/until they get one, Petit, as well as Emilio Pagan, will need to fill in wherever they can. Neither of these guys is fantasy relevant just yet, but if Treinen hits turbulence, we have a good indication who Oakland’s next choice will be.

Must Own: Edwin Diaz

This bullpen hurts my head. In fact, the whole organization does. Are the Mariners rebuilding? Like, what actually is this? Anyway… Edwin Diaz, he’s the closer you want. It was a weird year for the 23-year-old, but since fastball-savvy pitchers are giving up more home runs than ever, this is what we should come to expect.

Diaz had a horrible June, allowing four homers on 11 hits. Fantasy-wise, those home runs hurt like hell, especially for a pitcher with an ADP just outside the top 100. However, owners need to remember Diaz’s yin/yang effect. Despite all of his troubles, Diaz still brought the good and the bad, firing 89 strikeouts and tallying 34 saves.

Perhaps a conscious decision to throw his slider a little more could help. In 2017, Diaz threw his slider low and inside nearly 9% more than he did in 2016. Small number, so who cares, right? Exactly, it is a small number, one that needs to increase ten-fold this season. That same slider location created a 65% swing rate, and if he threw more of it, we may find ourselves less concerned with an alarmingly high 4.36 BB/9, much like the one owners were faced with in 2017. 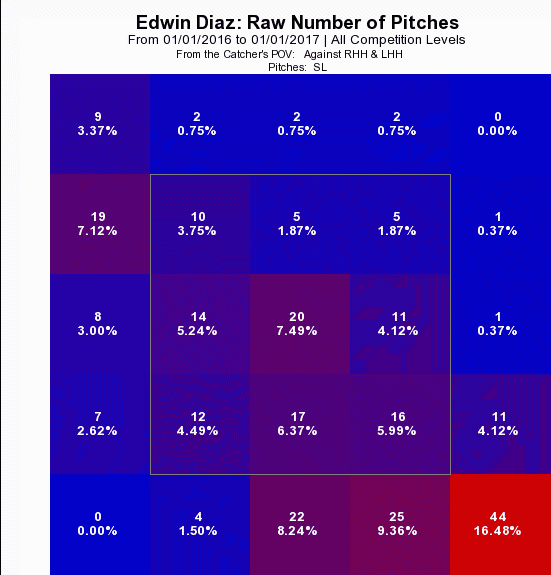 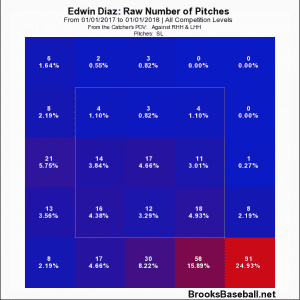 It might seem ridiculous to compare Diaz to Lance McCullers Jr., but after throwing 28 straight curveballs during Game 7 of the ALCS, the Astros’ starter proved that pitchers sometimes need to transition away from their fastball in high-leverage situations. If Diaz can accomplish that with success, look out.

Diamond in the Rough: Juan Nicasio

Breaking out for a killer season in his 30s, Juan Nicasio is one of my favorite bullpen arms entering this season. And since we were just talking about Diaz’s fastball, let’s pick up where we left off.

Nicasio changed his fastball approach entering 2017, intentionally throwing it high in the zone. That slight alteration resulted in a 51% swing rate on the pitch, Nicasio’s highest total of his six-year career. The other big improvement came against southpaws. Between 2014-16, Nicasio finished with a .393/.412/.391 wOBA against lefties. All of that changed last season, as Nicasio rounded out with a .235 wOBA against left-handed hitters, a huge credit to not only a scarier looking fastball but also a slight uptick in velocity on his slider.

Must Own: Keone Kela

Welcome to Groundhog Day. I refer you to Game 1 of the Texas Rangers’ 2017 season below. (Spoiler alert: Matt Bush and Sam Dyson turn a five-run lead into an 8-5 loss in the matter of two innings):

Flashback to the first #Rangers game of the season. Just watch as the magical Matt Bush/Sam Dyson turn a 5-0 lead into an 8-5 loss in the blink of an eye! pic.twitter.com/z61ib8j2QI

So, obviously, that’s bad, and it was a recurring theme for most of the season. The Rangers’ budget is low with starting pitching also in need of attention, and reality has now set in that much of the 2018 season relies entirely on the health of the bullpen.

If history is anything to go by, Keone Kela may not be the most trustworthy man in that department. He hit the DL on two separate occasions during the final three months of last season, but there is one area owners should hold faith: strikeouts. Kela will no doubt have a Spring Training fight on his hands if he is to paw the closer role away from Alex Claudio. Again, it all comes down to health and perhaps how long a leash the Rangers allow the youngster. Either way, Kela could single-handedly turn this bullpen around, and wind up one of the biggest fantasy breakouts of 2018.

Diamond in the Rough: Yohander Mendez

Having spent most of 2017 in Double-A, Mendez could very easily vie for a spot in the Rangers’ bullpen at some point this season. He sported an 8.1 K/9 as a starter in the minors last season, but he showcased much higher whiff rates in the lower minors, which could return with a move to the bullpen. The home run ball (23 allowed last season) has been a problem, though.

You could also make a case for the 34-year-old Tony Barnette here. It was two years ago, but the righty finished 2016 with a very impressive 2.09 ERA in 60.1 innings pitched. Still, Mendez makes for an interesting watch this Spring as a potential deep stash option.

Fantasy EPL: Round 24 Review / Round 25 Preview