You know something, we’re pretty spoiled for choice at reliever. No matter your draft strategy, you have a good chance to walk away with a reliable closer if you play your cards smart this season.

Last season tells us Kenley Jansen and Craig Kimbrel are in another galaxy of their own, but for those of us left here on earth, last year also tells us that reaching for an elite closer isn’t always the best strategy come draft day. Injuries and pitchers go hand in hand — see Jeurys Familia, Mark Melancon, and Zach Britton for case and point. Fortunately, our ADP data suggests there might be some real value outside the top-tier reliever arms, if only … there was some way we could sort out the pretenders from the contenders ahead of Opening Day?

Wait a minute; there is! We’ll kick this series off with Sean Doolittle. At age 31, the lefty’s ADP is sitting at 138.1, good for 14th among relievers ahead of guys like Hector Neris, but below more established arms like Brad Hand. The Nationals actually enter this season knowing who their closer is for a change, but despite Doolittle’s post-trade success, we’re left wondering where exactly he fits in among the “elite” relief arms and all the rest. So is his ADP fair? Or are owners simply banking on Doolittle’s small two-and-a-half month sample size in Washington?

Doolittle finished with a 2.81 ERA last season. Across his six-year career, his ERA sits at 3.02. In comparison to other arms that have been throwing the ball since 2012 (Doolittle’s debut year), only Zach Britton, Wade Davis, and Craig Kimbrel have managed to keep their ERA under 2.00 in that time frame.

This is by far the biggest stat that separates Doolittle from the best of the best, but it’s in large part due to his struggles against right-handed hitters. Versus lefties, Doolittle has been magic, surrendering just six home runs throughout his career while holding opposing batters to a .188 AVG against. Righties, though, they’ve had some fun, including last season where he gave up 15 earned runs in 39.2 frames. Having spent most of his playing career in an extreme pitchers’ park in Oakland, a lot of this comes down to pitch selection, which we’ll talk about later. However, with a full season ahead in a ballpark that’s seen 107 homers hit by righties over the last three years, the neutrality of Nationals Park could pose a few challenges.

Between Oakland and Washington, Doolittle posted his lowest WHIP (0.86) since 2014. That placed him ninth among relievers, finishing with a WHIP lower than Felipe Rivero and Ken Giles. Walks have never been a huge issue here, as Doolittle’s 1.75 BB/9 across his career illustrates. Once joining Washington last season Doolittle quickly went to work, posting an eight-game stretch without allowing a single walk. Command has been a huge area of improvement for the veteran, but his versatility has also been amazing. Throwing his fastball up in the zone more than usual last season, Doolittle completely talked hitters into swinging nearly 50% of the time. As the heatmap shows below, this kind of success was a big reason Doolittle walked just 10 hitters all year. 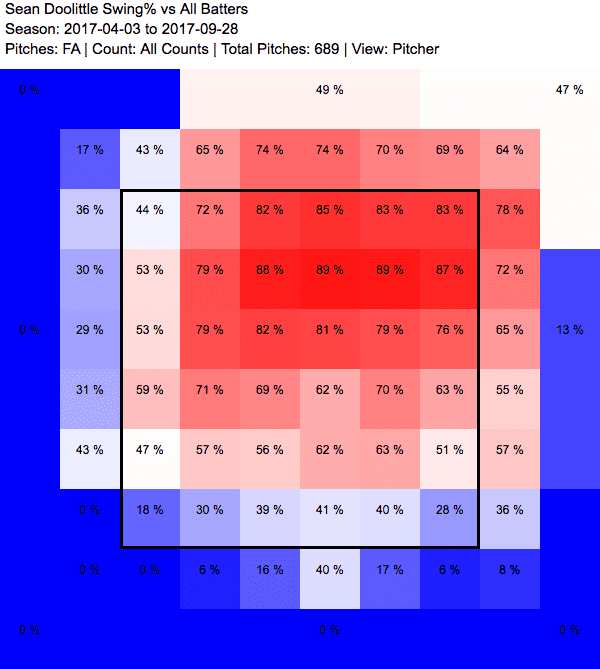 As a fastball-first pitcher, that number contributed enormously to a career-high 46.3% swing rate on pitches thrown outside of the zone. Keep in mind, Doolittle did miss some time on the DL last year, so if he pitches a full season, all of these numbers might change a little. Still, walks are something owners really don’t have to lose sleep over.

Can we really expect another 51 innings from a 31-year-old? Doolittle’s history tells us no, and in fact, those same 51 innings marked the most he’s ever thrown since the 2014 season. Injuries have played a major factor for Doolittle throughout his career, and last season was no exception. He missed all of May and half of June due to a left shoulder strain, the same diagnosis that cost him the start of the 2015 season.

It’s been an ongoing problem over the last three years, and one potential owners need to keep in mind on draft day. As it often goes, the shoulder injury cost Doolittle close to a mile-per-hour on his average fastball velocity last season, but he still held up quite well when called upon. Having pitched in 11 games on zero days rest (again, the most since 2014), Doolittle allowed only eight hits and one home run — so yes, when he’s healthy, he can certainly give you consecutively effective innings throughout the week.

Let the record show there was no structural damage to the shoulder, either, but of course, father time could come knocking at any moment, and at Doolittle’s age, another flare-up wouldn’t be surprising. Word of advice: Just make sure you pair him up with a worthwhile replacement should he (when he) hits the DL at some point.

This is probably Doolittle’s biggest selling point. He held a magical 6.20 strikeout-to-walk ratio last year, which ranked ninth in the league ahead of Ken Giles, Brad Hand, and Cody Allen. FYI, all of those guys are being drafted ahead of Doolittle, but if you’re purely after a closer that can mow down hitters, allow me to continue.

Doolittle totaled 62 strikeouts in 51.1 innings last year, good for a 31.5% strikeout rate. But what’s really impressive is the fact that 17 of those Ks came in high-leverage situations. When the pressure was on, Doolittle remained cucumber cool with men in scoring position, allowing just five hits and six earned runs all year. What’s really scary, though, is he accomplished all of this mainly with his fastball. 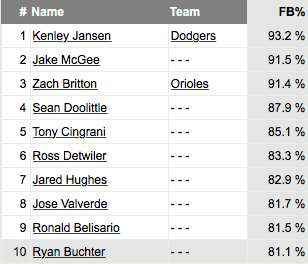 The above graph is the percentage of fastballs used among relievers ranging from Doolittle’s debut year (2012) up until now. As you can see, he’s among good company, but there is an area Doolittle could Doo-more (you knew it was coming) this season: pitch count. We already spoke about how effective Doolittle’s four-seamer was earlier, but he threw 20 or more pitches on 10 separate occasions last year, averaging 14.83 pitches per game. Are those numbers alarming? Yes and no, but for an injury-plagued old dude, there needs to be a solution if Doolittle is to a) last a whole season, and b) continue to make hitters miss.

Sometimes these problems require complex answers, but this one is simple: the slider. It’s a pitch Doolittle has tinkered with for years, only to completely abandon every time. He’s struggled with generating spin, he’s struggled with wrist flexibility, but being the persistent man he is, Doolittle is reportedly working hard on it this spring.

See, the trouble with Doolittle’s fastball is that it requires pinpoint accuracy. Live by the sword, die by the sword — it’s a wearing pitch (hence the injuries), but for the first time in his career, he has the luxury to work on something new. Whether or not Doolittle turns this slider experiment into an effective pitch is one to watch during exhibition games, but it would really lower the pitch count if he could add it to his arsenal. After years of fastball, fastball, fastball, a veteran lefty throwing a semi-okay breaking ball could also equal a handful more strikeouts.

So you’re drafting a closer, let’s say, somewhere between the 10th and 12th rounds? You want saves, right? Doolittle has you covered. He converted all 21 of his save opportunities after joining the Nationals, finishing with a career-high 24 for the season. In September/October, Doolittle has been money, earning 13 saves in the winter months across his career. Since this is probably the Nationals’ last chance to contend, Doolittle will receive the majority of save opportunities during a potential run toward the postseason, and for fantasy owners, this is particularly good news.

In save situations, Doolittle holds a career .171/.194/.274 line, and he should once again be backed up by not only a terrific offense, but also a starting rotation that held the fourth-lowest ERA in the Majors last season. Expect the Nats to hand Doolittle the ball in some pretty cushy scoreboard situations, leaving him in prime position to post something close to 40 saves if he stays healthy.

Last season, the Nationals named their closer four days prior to Opening Day. This year, the duties are Doolittle’s to lose. That’s unfamiliar territory for the veteran, having never entered a season with a guaranteed closer gig. It should inflate his confidence as well as yours, the fantasy owner, but there’s also no looking past his troublesome DL history. Since I can’t predict bumps and bruises, the one thing I can tell you is this: that 138.1 ADP is right on. This is a mid-tier reliever that hitters simply can’t catch when he throws hard and high, and since he’s executing that pitch to near perfection, Doolittle’s arm is a must-own in all leagues.

Doolittle will have the odd outing that makes you go “huh?” just like the two earned run slip against the Pirates in the final game of last year, but overall, unless you’re willing to cough up a draft pick early for a superstar name, Doolittle is one of the best relief options for owners who don’t draft pitching early.