You know something, we’re pretty spoiled for choice at reliever. No matter your draft strategy, you have a good chance to walk away with a reliable closer if you play your cards smart this season.

Last season tells us Kenley Jansen and Craig Kimbrel are in another galaxy of their own, but for those of us left here on earth, last year also tells us that reaching for an elite closer isn’t always the best strategy come draft day. Injuries and pitchers go hand in hand — see Jeurys Familia, Mark Melancon, and Zach Britton for case and point. Fortunately, our ADP data suggests there might be some real value outside the top-tier reliever arms, if only … there was some way we could sort out the pretenders from the contenders ahead of Opening Day?

Wait a minute; there is! Next up in this series, we take a look at Alex Colome, a closer who’s ADP sits at a remarkably high 131.45, good for lucky 13th among relief pitchers this season. Fantasy circles have been abundant in hoopla and fuss surrounding Colome this offseason, with the general consensus erring on the side of caution on draft day. Let’s see if we’re worrying for nothing.

Captain Obvious, this is the No. 1 stat distancing Colome from the rest of the elite arms. His 3.24 ERA ranked 68th among relievers last season, and although he was among good company with Aroldis Chapman ranking just two spots ahead of him, Colome did allow two earned runs or more on six separate occasions last year.

To his credit, Colome doesn’t discriminate against lefties or righties. In fact, he shares the love equally. Throughout his five-year career, Colome has given up 45 earned runs to lefty batters but has surprisingly allowed 14 home runs to right-handed hitters. What’s really interesting about Colome’s splits, though, is his struggle with the long ball at Tropicana Field — a park that can challenge even the most powerful of hitters, particularly righties. Last season he finished with a .260 AVG against at home, but a much more impressive .186 AVG against on the road. Owners would do well to keep an eye on Colome’s home/road travels throughout the season.

If you read too much into Spring Training, you’re probably sweating buckets, as Colome allowed three base runners last week in his first outing. However, before you go ahead and chastise him, take a look at the numbers first. Walks and Colome aren’t exactly a huge issue, but it is hard to get a grip on just how much command the righty has. Last season the 29-year-old finished with an 8.2% walk rate and a 1.20 WHIP, and although he walked only eight more hitters than he did in 2016, there is something to be said about his pitch selection.

When Colome transitioned into the Rays’ setup role two seasons ago, he scrapped his change-up and curveball in favor of his cutter and four-seam fastball. That change worked wonders in 2016 when he posted a career-low 1.91 ERA. But someone forgot to tell Colome that if it ain’t broke, don’t fix it. Surprisingly, he threw his cutter a career-high 66% of the time last season and his four-seamer 18% less.

And how did that turn out?

Despite the dramatic decrease in his four-seamer usage, Colome’s fastball still (somehow) allowed 22 hits and 10 walks, just two fewer than he gave up the year prior. What’s really telling, though, is his swinging strike rate on that pitch plummeted to just four percent, highlighting that Colome’s fastball looked a whole lot less sexy coming into the batter’s box.

If we take a look at some heat maps, we can also see Colome’s tendency to throw his fastball on the outside part of the plate a lot more, shying away from throwing it down in the zone like he did in 2016. 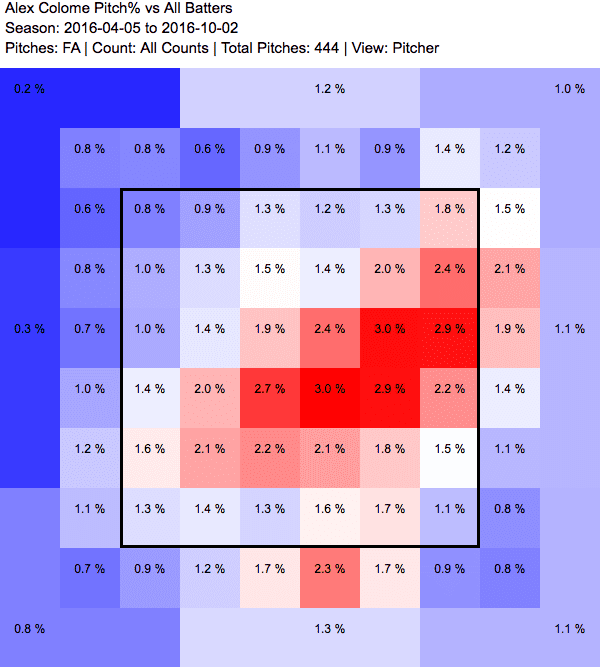 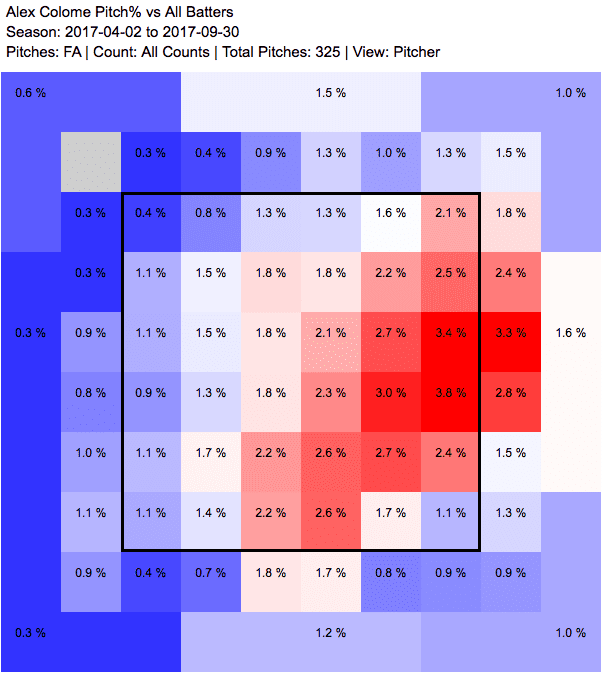 Simply put, hitters weren’t biting last year. That’s probably why Colome trusted his cutter a lot more last season, but even so, 23 walks is still a slightly alarming number that will concern potential owners. For comparison’s sake, that’s 13 more free passes allowed than Sean Doolittle, the guy that is ranked one spot below him on our Fantrax ADP list.

During the midway point of last season, everyone around baseball was beginning to question if Colome was hurt. From Jun 20 to July 7, Colome allowed 10 earned runs in five consecutive innings pitched, all of which were unexplainable. The Rays reassured us that he was in fact quite healthy, and fortunately for owners, that seems to be a common theme that you can bank on going forward.

Colome pitched a total of 66.2 innings last year, the second most of his career. Overall, you could say he held strong, especially considering 31.1 of those innings came in high-leverage situations, but although he spends very little time on the DL, what to make of that June hiccup?

The one takeaway from last season was that Colome was most effective in short bursts. As it is with most pitchers, when the pitch count gets too high, everything turns to mush. When throwing 10 pitches or fewer, Colome recorded a strikeout on four separate occasions, but he also threw five innings of 30 or more pitches last season.  It probably comes as no surprise to learn Colome’s strand rate fell from a crazy impressive 93% in 2016, all the way down to 72.4% last year.

Sean Doolittle, Arodys Vizcaino, Hector Neris, and Greg Holland walk into a bar. What do they all have in common? They all sit below Colome in terms of Fantrax ADP.

The above graph is last season’s strikeout tally among the five pitchers. Not only does Colome rank at the very bottom in total strikeouts (58), he also had the lowest swinging strike rate of the lot (11.6%). Owners are no doubt reaching for Colome in some cases, and although strikeouts may not be the first thing on their mind, I can’t help but wonder if people realize just how poor his 2.52 strikeout-to-walk ratio was last season.

To put it into perspective, that number ranked lower than Ryan Tepera and Brad Brach. And although Colome does feature swing-and-miss stuff, this is an area that also separates him from the best-of-the-best. Of course, this is a number that could easily change if Colome decides to reintroduce his curveball back into his repertoire. That same breaking ball tallied 26 strikeouts back in 2015 and could be useful considering his recent struggles with walks.

Colome led the league with 47 saves last year, but is it enough to reach for him in standards leagues?

It might seem crazy to call a 65-game season a small sample size, but that is what 2017 was. Basing the same kind of projection off of last year is difficult, especially considering the Rays are still in a firm rebuilding phase. Aside from that, there’s also one other factor to consider here: a trade. Colome has been a hot topic of trade talk throughout the offseason, and although he seems safe for now, a midseason deal wouldn’t be the least bit surprising. I don’t know about you, but I don’t want to pay big bucks for a reliever that winds up as another teams setup man while they make a push for the postseason.

There’s an old adage in fantasy baseball: Don’t pay for saves. There’s nothing to suggest last season’s save total will drastically decline, but potential owners should be cautious of Colome’s walk woes as well as his increasing hard-hit rate. There’s also nothing to say that Colome can’t right the ship. After all, he’s hardly lost velocity on both of his pitches, and since he’s set to turn the ripe old age of 30, there’s certainly a lot left in his arm. As far as his 131.45 ADP goes, however, that’s a number that seems almost too high considering you’d be reaching for a pitcher with spotty command, decent strikeout numbers, and no guarantee of consistent saves considering he may be traded.