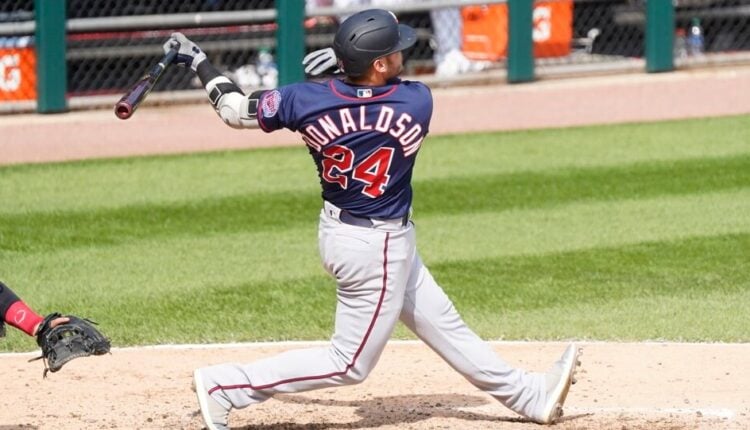 Justin Dunbar sifts through a shallow third base position to identify the top third base sleepers for the 2022 fantasy baseball season.

Where are fantasy baseball drafts won?

Some will say it comes with getting your stars in the early rounds. However, for me, it’s later in the draft that separates the winning teams from the rest of the pack. Being able to find key contributors when others can’t will give you a much deeper roster- the type that can keep pace in several categories over a long season.

Third base is usually a deep position, but that is not the case this season. Once you get past the top three to four players, the rest have certain question marks attached to their profiles that may make them difficult to draft. With that in mind, you may prefer to wait at the position, which is where finding true sleepers comes into play.

All of these third basemen are currently being drafted past pick 200, yet could provide strong contributions for your team next season. From this day on, we shall no longer sleep on these four players! Who are these third base sleepers? It is time to officially wake up!

ADP via NFC.com (Since December 1st)

How consistent has Josh Donaldson been at the plate? Since 2013, he’s posted a 118 weighted-runs-created-plus (wRC+) or better, and that worst season came in an injury-plagued year in 2018. In other words, he has consistently been well above league-average offensively, and that continued in 2021 with a 124 wRC+.

Heading into 2022, we should expect more of the same from Donaldson. The 36-year-old posted a career-high 17.4% barrel rate, and coupled that with a career-low 21% strikeout rate. Essentially, his quality of contact was better than ever, and so was his contact ability. With this combination, his barrel rate per plate appearance (12.2%) ranked third-best among ALL major leaguers, not just third basemen. That is quite impressive.

I feel like Josh Donaldson is a great target for his price. I know the injury risk is there but he is the 19th 3B off the board.

19th when last season he was top five in Barrel%, wRC+, ISO, Max EV, and EV/FB at the position. pic.twitter.com/ERn8ki3Drl

While Donaldson’s 18.6% home run/fly ball rate feels fine, it was still below his career-average 19.1% rate. If he can sustain such a dominant barrel rate, then that number should rise over 20% in 2021. Meanwhile, we know that line drives are unstable on a year-to-year basis, so we should expect Donaldson to raise his line-drive rate from 20.5% closer to his career average of 23.7%. This should assist his .268 batting average on balls in ball play, which was the lowest it has been for a full season in his career. Thus, I’m confident he can post around a .250 batting average in 2022, allowing him to shine in the power department without hurting you in the batting average department.

There seems to be trepidation around Donaldson due to him being “injury-prone”. Yet, I’m not sure that is actually the case. Here are Donaldson’s games played and plate appearances per season, starting in 2013:

Donaldson has dealt with injuries, but he’s been rather reliable outside of that stretch. The Twins’ struggles last season certainly hurt his runs and RBI totals, but with better health from their key players, there is plenty of reason to expect better totals there. Really, outside of his age, I don’t see the pushback for Donaldson as at least a top-15 third baseman. Would it surprise me if he ended up being a top-10 option? Not at all. I know we tend to go for the young, flashy options, but there’s something to be said about Donaldson’s steady production. If you miss out on a third baseman early, he is the ultimate fallback option in fantasy drafts this offseason.

Heading into last season, Eugenio Suarez was considered to be one of the premier third base options, and for good reason. After all, he hit 49 home runs with a .271 batting average in 2019, and showcased strong power (.268 ISO) once again in the shortened 2020 season. What could go wrong?

Unfortunately, everything went wrong for Suarez in 2021. His batting average was under .200, his power regressed, and he ended up 15% below the league average in terms of wRC+. That is certainly not ideal, to say the least. So, we’re NOW supposed to be looking at drafting Suarez? That’s right.

To full understand the story of Suarez’s season, it has to start in the offseason prior to the 2021 season, where he suffered a shoulder injury that required surgery. With that in mind, it is not a surprise he started out slowly, posting a 38.1% strikeout rate and 40 wRC+ in the first month of the season. However, after that, Suarez made major gains when it comes to contact quantity: 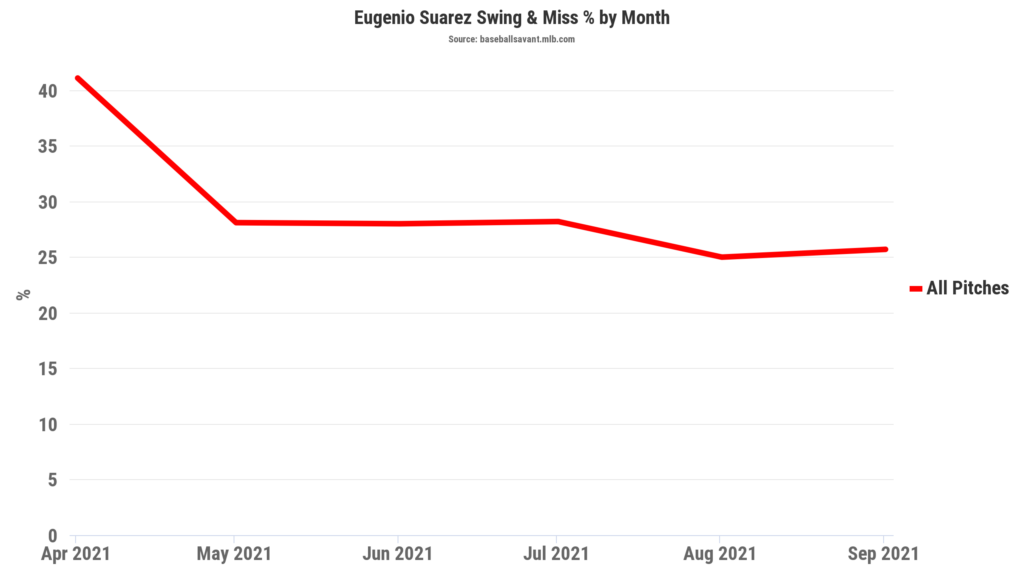 Meanwhile, likely due to the shoulder injury, Suarez struggled to hit the ball hard at the beginning of the year. As the season went on, though, that changed.

This is remarkably encouraging. Suarez was clearly hampered by the injury, and as the season went on, he started to look more like his normal self. From August 1st on, he posted an 18% barrel rate and .331 ISO, while he lowered his swinging-strike rate to 10%. That is exactly what we wanted to see as he got further removed from the shoulder injury.

Not only should Suarez be healthier in 2022, but he should also benefit from natural positive regression. His .224 BABIP is quite low compared to his career-average .299 BABIP, and may have a lot to do with a career-low 20.4% line-drive rate. However, since his career-average rate is 26.1%, I’m confident we see more line drives in 2022. That will make his batting average less of a liability, while also allowing his power to continue to shine.

In a lot of ways, there isn’t any reason why Suarez can’t be the player we expected him to be heading into 2021. He should be fully healthy from his shoulder injury at this point, while he’ll regress positively in several key areas with optimal luck. Based on how he ended the season, I’d say that the chances of a full rebound are higher than you may expect. Add in his shortstop eligibility, and he looks to be a nice value where he’s currently being drafted and one of the top third base sleepers of the 2022 season.

Sometimes, all a player needs is the opportunity to produce, which is the story with Abraham Toro. Overall, Toro’s 95 wRC+ doesn’t seem overly impressive. That being said, there is a lot of context that needs to be given.

With a 159 wRC+ in the minors since 2019, Toro is clearly a talented hitter. However, with Jose Altuve and Alex Bregman in the fold, he never got the opportunity to thrive; most of his time with Houston consisted of pinch-hitting spots or filling in for an injured Bregman. Toro slowed down towards the end of the year, but upon being traded to the Mariners, he was a league-average hitter; he was finally getting the everyday playing time he deserved, so the results improved.

That being said, there is more to Toro’s profile than just a 103 wRC+. His 8.2% barrel rate with the Mariners suggests that he should have hit for much more power (.115 ISO), while his 18.5% line-drive rate stands out as being abnormally low. I’d expect these two factors to combine together to lead to more power, in addition to a higher BABIP; he posted a low .254 BABIP last year.

Toro hits the ball in the air (30.3% under) often. What he needs to do, though, is pull the ball more often. That could certainly happen in 2022 and needs to be accounted for. With a low 14.4% strikeout rate and clear contact skills, you know he can hit for at least a capable batting average in the BABIP luck improves. Now, if the power matches with his overall potential, then you could have an all-around steady offensive performer.

Heck, general manager has talked about Toro playing in the outfield, which would add to his value further. He’s still only 25-years-old, and given his minor-league pedigree, you have to assume there is more left in the tank. Even if not, with the strong plate discipline and growing power, there’s already a solid base in place. As a late-round pick, there’s no reason not to take a chance on a player with a rather high floor with some clear upside. Meanwhile, if you play in a points league, his value rises every higher. Add in his 76th percentile sprint speed, 7-10 stolen bases, and multi-positional eligibility, and I don’t know what else there is to say; make sure to make Toro a priority later in drafts.

Josh Donaldson and Evan Longoria? Too bad it isn’t 2014!

We like to always assume that older players can’t improve, but that is not actually the case. Coaching plays a major role here, which helps us understand Longoria’s bounce back. In 2019, Longoria was a league-average (100 wRC+) hitter with 20 home runs and a .254 batting average in 508 plate appearances, which seemed to be his ceiling moving forward.

Following the 2019 season, the Giants made a coaching change, hiring Gabe Kapler as manager. Immediately, Kapler assembled a deep coaching staff consisting of multiple hitting coaches to assist in player development, including the veterans. One of them? Longoria, whose results under-the-hood got insanely better: 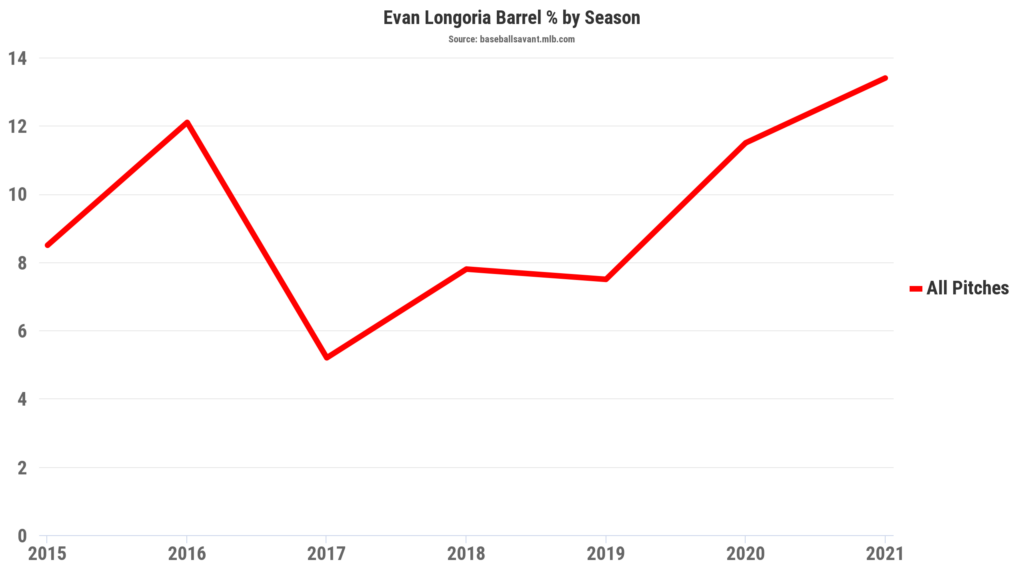 Somehow, someway, Longoria is barreling the ball as well as he did in his prime. Considering that he is far from the only Giants player who has accomplished this, I wouldn’t figure this to be a coincidence. Meanwhile, Longoria cut down his chase rate to 18.6%, yet didn’t cut down on his aggressiveness in the zone; another common trend with Giants players since the coaching change.

If it hadn’t been for a freak collision between him and Brandon Crawford, Longoria would have been able to play his usual slate of games in 2021. Thus, I wouldn’t consider the fact that he only played 81 games to be a red flag of any sort. For a respectable batting average and above-average power, you can currently draft Longoria in the 26th or 27th round in 15-team drafts. That sounds like a smart bet to me!