One of the greatest aspects of fantasy sports, and sports in general, is the debates. Whether you’re debating with a co-worker, significant other, friend, or even drunk Uncle Bob at the family reunion, the debates are endless. That’s what brings us here today. In the fantasy baseball world, player debates are everywhere, including in your own mind when trying to make that tough draft-day decision. Well, we’re here to help. To kick off our 2020 Fantasy Baseball player debates, the FantraxHQ baseball crew debates who should be the #1 pick in drafts. Should it be Mike Trout, the consensus #1 for over the last half-decade? How about young phenom, Ronald Acuña Jr. who has taken the league by storm? Or maybe Christian Yelich coming off back to back top-2 NL MVP finishes and a 44/30 season in 2019? Let’s debate!

TALE OF THE TAPE 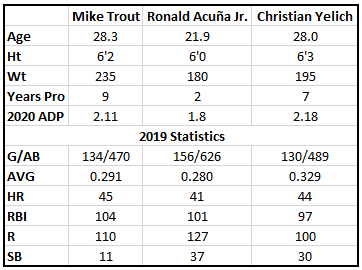 Let me start by saying that there is no wrong answer here. “That’s not helping us, Eric!” Yeah, I know. This was a tough choice for me and one I’ve debated all offseason. I’ve been a big Trout supporter for eons and consider him one of the best players to ever grace a diamond. He’s basically the Willie Mays of our generation. Power, hit, defense, arm, speed, it’s all there. Or is it? If only I could insert an evil laugh into an article. C’mon, it’s almost 2020, WE HAVE THE TECHNOLOGY. One area that has been on the decline recently is Trout’s speed and that is why I’m going with Ronald Acuña Jr #1 overall in 2020.

Today, Ronald Acuña Jr. became the youngest player in MLB history with 40 HR and 30 SB in a season 🔥

As Trout transformed into more of a middle of the order masher, his stolen base attempts were cut back from his early days when he had 49 and 33 respectively in his first two full seasons. Since then, Trout has averaged 19 steals per season and only swiped 11 last year in 13 attempts. The 11 steals tied a career-low and his 13 attempts were easily the lowest mark he’s had in a full season. With Trout now in his late-20’s, it’s safe to wonder if he’s more of a 10-15 steal threat moving forward than the 25-30+ guy he was earlier in his career. I say that and he’ll go out and steal 40 next year just to smite me. Don’t ever piss off the almighty Trout!

Meanwhile, Acuña and his spry, soon-to-be 22-year-old legs have a lot less mileage on them and a ton of additional speed upside. When I saw Acuña in the minors, his speed was what amazed me the most, even more than his offense which wasn’t as profound at the time as it is now, obviously. The 37 steals he recorded in 2019 are no fluke and I’d expect him to settle into the 30-40 range moving forward. That’s the difference right there. The other four categories will likely be very close, with Trout getting the slight AVG nod, but the likely 20-25 SB difference is what pushes me to the Acuña side for 2020.

It’s been nice not having to overthink the number one overall pick over recent years. You were simply getting too cute if you weren’t drafting Mike Trout. That time has come to an end. On the field, including defensive value, Trout is still the most valuable player. However, in fantasy, we have a new number one, and it is Ronald Acuna.

Trout is still a stud and I wouldn’t fault you for taking him with the top pick. However, he has now missed at least 22 games in each of the last three seasons, and he has averaged just 19 steals per season over that span. With stolen bases on the sharp decline around the league, Acuna’s ability to push 40 steals gives him the advantage over Trout in standard roto. In OBP and points leagues I would still lean Trout given his massive walk rate. Christian Yelich gives them both a run for their money, but his knee and back injuries are concerning enough to make him the third player off the board for me.

As Mike was indifferent about the three options, he provides the case for Yelich as the #1 overall pick.

I truly believe you can argue for and take any of the “Big 3” at first overall, but I am here to make a case for Christian Yelich. Yelich has been nothing short of amazing over the last few years and he might have won back-to-back MVP awards if it were not for the freak kneecap injury. I have zero questions or concerns about his production. Yes, he has dealt with some minor injuries but since his swing change and ballpark change that pair has brought the power to life.

Since becoming a Brewer he has basically given you a floor of 36 home runs, 100 RBI, 100 RBI, and 20 steals while hitting .320. Even in Miami, the floor was always high but he has taken it to the next level. The Brewers allow him to run at Will and I do not see any reason why they would stop him. I truly think you are literally getting the highest floor for 5 categories between Acuna, Trout, and Yelich. Yes, he lacks excitement but Trout has only played 140 games or more in 1 of the last 3 years, is coming off another season where the steals are dwindling down and lastly, a foot injury that cost him the final month. Steals are a huge need and Trout appears to have moved on from his best stolen base days.

As far as Acuna goes, he’s the flashy player and has arguably the highest upside but also the highest volatility. He strikes out way more than these guys and it could cause issues at batting average. Yes, steals are valuable but if he falls off the steals for any reason then you’re passing on a far surer thing for a guy who has the most bust potential of the top 3 candidates. The power is also difficult for the Braves to keep at leadoff, and although they’ve said they’re going to keep him leading off, I am skeptical. If he moves off the leadoff spot we will likely see a dip in stolen base production.

At the end of the day, Yelich has the safest floor of the “Big 3”. Play it safe and start up your draft with a solid floor and build in some risk later on where it won’t cripple you.

When it comes to the first pick in fantasy baseball drafts, give me Ronald Acuna Jr. Mike Trout may be the safest pick and has long reigned at the top of fantasy baseball for nearly a decade now, but Ronald Acuna Jr. just gave us a near 40 homer, 40 steal season. The potential for elite five-category production from the 22-year-old stud is just too good to pass as the first pick in the draft. As long as he is leading off, Acuna should be running wild as he stole 35 of his 37 bases in 118 games from the leadoff spot. Is there any doubt that in today’s environment Acuna could match or surpass 40 home runs with regularity throughout his career?

You really can’t go wrong with Mike Trout at first overall, but we’re looking at three straight seasons now with 140 or fewer games played. To preserve his health, we may see Trout running less, as evidenced by his 11 steal total of 2019. The days of getting over 30 steals might just be over. In a league where speed becoming more scarce and unpredictable, give me the 40/40 upside in Ronald Acuna Jr. all day.

If I am lucky enough to land the number 1 pick in any leagues this season I’ll be using it on Ronald Acuna. The Uber-talented outfielder from Atlanta has supplanted Mike Trout as the no-doubt top player in my mind. There is really only one reason driving this decision for me and that is steals. In an era where teams are running less and less, for us as owners every last steal we can get is a huge boost. Acuna posts legit 40/40 upside and should be an easy bet for 25 plus steals. Trout stole only 11 bases last season and while we have seen him follow up an 11 steal season in 2015 with a 30 steal one in 2016, I believe his recent health woes may cause him to be a bit more cautious on the bases.

Trout is easily the best player in baseball but if I can get a true five-category contributor at 1.1 I will do it. Yelich is also in play here and posts similar 40/40 upside, but coming off a freak knee injury I am not confident he runs quite as much as he did last season. While you can’t go wrong with either of the three at 1.1 I am willing to chase the upside of Acuna and make him my top choice. Note: This is only for standard leagues. Trout is the unquestioned 1.1 in OBP leagues.

Why Trout over Yelich or Acuña?

While Ronald Acuña Jr. and Christian Yelich are both talented enough to finish next season as the top-ranked fantasy player, I want Mike Trout in my team if he is available. The Angels star is still just 28 and coming off a season in which he hit 45 bombs in just 134 games.

Trout is already over the foot injury that took away the final weeks of his season. The Angels have money to spend and they are desperate to add talent so they don’t throw away yet another season of Trout’s prime. The center field should be as motivated as ever. He may even add to his 11 stolen bases, and frankly, I don’t think Acuña is going to steal as many bags as this year.

If they are all healthy, Trout, the reigning AL MVP, is the better bet to lead the trio in runs scored, RBI, OBP, wRC+, and home runs. Give me the best, and I’ll figure out the rest.

NBA DFS Plays for Wednesday, 12/4: Don’t be a Dinwiddie