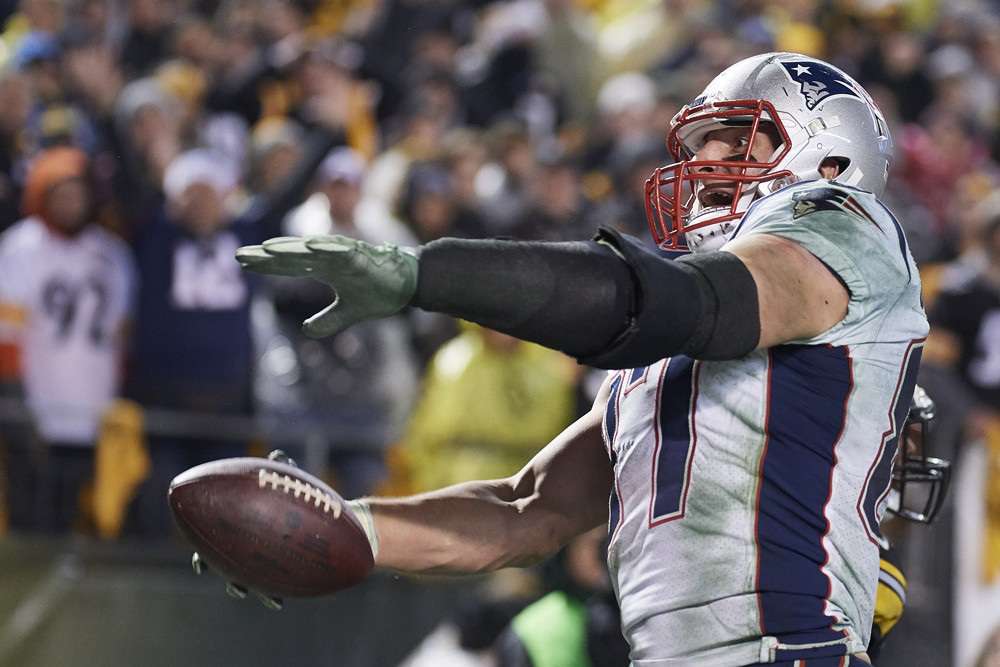 Football’s back! Mock drafts are here! We’ve spent the offseason speculating. Teams and players have given us hints. But we’re now only a few weeks away from watching actual football. I’ve been using best-ball leagues to give me some tells on market value, but redraft leagues are another animal. High-upside and risky players must be mitigated with floor plays to account for the entirety of the fantasy season. To test the waters, I joined a 12-team PPR expert mock draft hosted by Fantrax with some of the best in the industry. This expert mock draft was 13 rounds starting 1 QB, 2 RB, 3 WR, 1 TE, 1 Flex, 1 DEF, and 1 K.

The mock draft order was as follows:

There’s no denying it, times have changed. The 2017 season featured 11 running backs selected in the first two rounds of PPR drafts according to Fantasy Football Calculator. This amount has increased to 14 in 2018. This trend has brought back the perennial ‘Is Zero-RB Viable?’ argument while leaving quality wide receivers on the board. Out of the two-spot, I expected to get a running back out of the elite tier. Strategy, value, and my own projections would be required to get me through the remaining rounds.

Antonio Brown at first overall was surprising, but I was still ensured a running back out of the elite tier. Gurley, Bell, and Johnson are all involved in both the running and passing games of their respective offenses. Their projected workloads and usage make them semi-interchangeable, but the optimism surrounding the Rams and their 2017 campaign was too good to pass up. Despite not taking the rushing title, Todd Gurley still finished with 1,305 rush yards. If that wasn’t enough, he added 788 receiving yards to his production. Looking ahead, Gurley’s 2018 outlook looks like last season. The Rams still have a solid offensive line (10th according to PFF) and the team did not make any significant additions at the position. Gurley’s currently projected as the RB1 for another 2,000 scrimmage yards. At my draft position, he was an easy pick.

Picks in the first round are generally determined by draft slot. The second round is about finding value. Six wide receivers were selected in the second round prior to my pick. Each of them projected as WR1’s with a minimum 15% market share. With that tier gone, Rob Gronkowski became viable. Gronkowski’s durability is always a concern, but he was tied for first in targets per game among all tight ends at 8.1. It’s not my usual style, but I was forced to come up with a strategy to cover the opportunity cost of such an early investment at a replaceable position.

Ready for a mock draft of your own? The Fantrax Mock Draft Lobby offers several opportunities each day to help you perfect your draft day strategy.

The 2/3 turn didn’t offer much separation with regards to my thoughts on receivers available in the second round. With a general plan in mind, I returned to the running back pool. Mixon, McKinnon, Howard, and McCoy rounded out my next tier. Howard offered the greater floor, but I took a shot on Joe Mixon. Jeremy Hill’s departure, a slightly improved offensive line, and a drop in weight are all positive signs that the team believes in his talent and Mixon wants to take on the role. His 41% success rate combined with his 51% snap rate should only increase with the larger workload. His +116 effective yards (DVOA translated into a yards-per-attempt metric) indicate his vision and on-field skills are still there. It’s a gamble, but with Gurley as my RB1, it seemed safe.

My ideal wide receiver targets in the fourth were players that operated as WR1’s on their team but didn’t have similar market share numbers to those drafted in the second round. Examples include Demaryius Thomas, Alshon Jeffery, Amari Cooper, Marvin Jones, and Allen Robinson. After getting sniped by Greg Smith, I had to adjust my approach. If I couldn’t get production through touchdown equity, I’d get it through volume. Golden Tate has been in the top 20 for targets the past three seasons. With upside at the running back and tight end positions, a floor at receiver was acceptable.

Targets, targets, targets. Juju operated primarily from the slot (58% according to PFF) in 2018. The addition of James Washington doesn’t project to affect Smith-Schuster’s 2018 outlook as Washington plays the outside. He presents as another floor WR2 with weekly upside in a high-volume offense. The same applies to Robert Woods. Even if he only benefited from Sammy Watkins drawing primary coverage, Robert Woods remains in the same situation for 2018. He would round out the receiver corps with a focus on running back in the next couple rounds.

Admittedly, I want this pick back. The idea was to look for first and second down backs with some usage in the passing game and touchdown upside. Marshawn has all of these traits. He even has one of the best schedules for a running back (18.5 avg  Opp aFPA against RB). It wasn’t a reach, but I’d prefer more upside for my third running back. Looking back at the board, Rex Burkhead would’ve been a better pick given the New England offense, but not a complete overstep.

A couple things to remember. ADP expressed by pick relays market value relative to all positions. ADP expressed by rank within a position gives context into how much production we can expect by comparison. C.J Anderson has a pick ADP of 9.10 in 12-team leagues. I took him at 8.02. Anderson also has a rank of RB38. I took him at RB40. Drafts differ with positional runs affecting pick ADP. By keeping sight of rank, you can anchor your selection process, and spot value as it falls to you.

Again, another one I want back. A volatile flex play would’ve been a better complement to the build. I prefer Kenny Stills to Agholor looking at the board, now. But, quarterback was the priority of these two rounds. Industry mocks typically feature late-round quarterback picks. This was no different. After Kyle broke the seal in the eighth round, my eye was on quarterbacks. I expected to gain pick value by waiting but drafting the projected QB8 as the QB9 secured its validity as cost-effective. With my ‘onesie’ positions filled, I could focus on building depth.

This draft was done on July 2. Since then, Meredith’s ADP has risen over news of his health and slot role in a Drew Brees’ offense. While the pick and associated cost are within the norms, the overall composition of my team is still lacking. Corey Clement looks to be an excellent complementary piece in Philadelphia. By the end of the draft, I had five running backs and five receivers. Based on when they were picked, more receivers should have been the path to boost my upside.

The remainder of the draft filled out as expected. Defenses were selected, and late-round darts were thrown. Overall, my largest errors were in finding value at wide receiver. A receiver’s role in his team’s offense can be just as valuable information as their ADP. Forming a game plan around each type of role can help guide you through your draft.

It’s time to make all the preparation pay off! Head on over to Fantrax to start or join a Fantasy Football league. Fantrax can work with virtually any league format you can dream up.