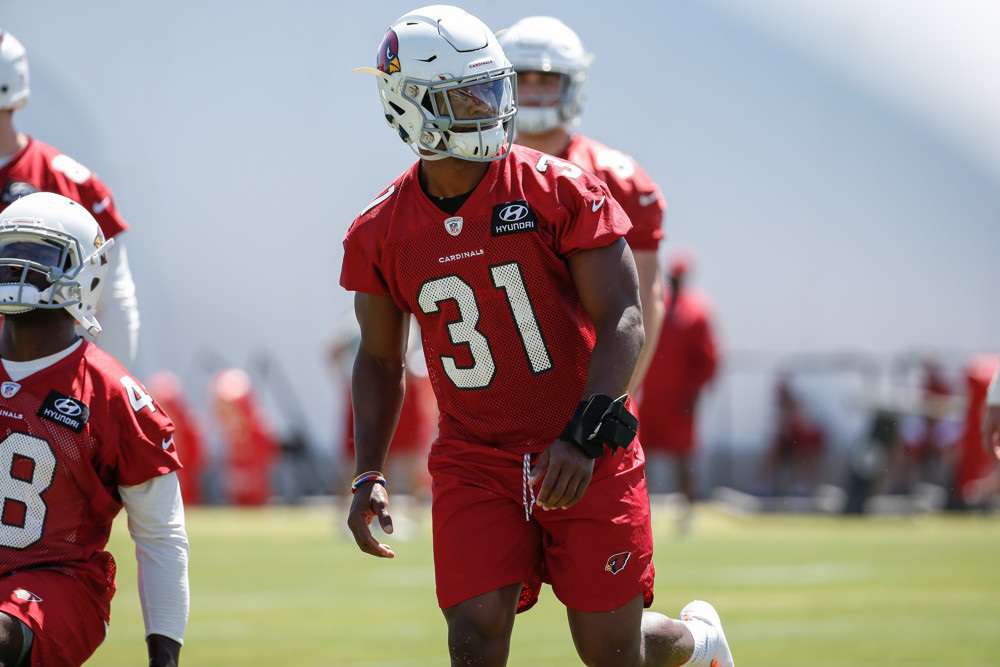 Mock drafts gives us a sense of how the public values their players and construct their rosters. An Expert draft is a somewhat different animal. Analysts tend to think along the same wavelengths and use similar processes during drafts. ‘Hive mind’ is too strong of a word, but the general connotation is there. Most of what you see being preached through podcasts, articles, and Twitter posts occur in an expert draft:

With all this in mind, I put together another mock draft. The scoring format was changed to Standard to promote alternative draft strategies. The mock was 14 rounds starting 1 QB, 2 RB, 2 WR, 1 TE, 1 Flex, 1 DEF, and 1 K.

The draft order was as follows:

The scoring format meant a devaluation of wide receivers or, at least, receivers that weren’t projected for high yardage or touchdowns. Opportunity, market share, and historical production were among the key characteristics of players on my target list for the early rounds. Roster construction wasn’t a primary concern to start off the draft and my position (5th) made any strategy viable. My best option to open the draft was to wait and see how the picks unfolded.

My first tier of running backs remains the same regardless of scoring format: Todd Gurley, Le’Veon Bell, David Johnson, and Ezekiel Elliot. PPR leagues can shift the order, but all four belong at the start of each draft.

David Johnson available at 1.05 was an easy selection. There are some valid concerns with the Cardinals’ offensive line, but his projected volume and workhorse role makes him a viable RB1. David Johnson was leading the league in all-purpose yards the last time we saw him. In 2016, his 1,239 rush yards were only good enough to be 7th in the league. However, fantasy owners were quite happy with his 879 receiving yards (1st among running backs). The remaining first round picks followed ADP. Mostly. Saquon Barkley at 1.06 and Davante Adams at 1.12 were ahead of their ADP, but given the format, their workloads made the picks tenable.

The acquisition of an elite RB left my options open in the second round. A low end RB1 or mid-tier WR1 were preferred targets. Jordan Howard at 2.06 was surprising, but admittedly, I forgot about the format change. Given the chance, I would have at least considered Howard at 2.08. But, my choices came down to Devonta Freeman or A.J. Green. In retrospect, I should have taken Green. Regardless of perceived improvements by the Bengals, his market share puts him ahead of most receivers taken before him. But Freeman was a suitable complement to Johnson. He has both a receiving and rushing role in an offense expecting some positive touchdown recoil. With this pick, my focus was on a wide receiver.

The downside of expert drafts is that we all draft similarly. Stefon Diggs and T.Y. Hilton were my primary targets as WR1’s for my team. Doug Baldwin was still battling injury, Tyreek Hill’s ADP still doesn’t match where I’m comfortable taking him, and Amari Cooper has yet to put it all together. Thielen’s price is more palatable in a PPR league, but his touchdown variance in 2017 can be seen as a positive for 2018. Wide receivers with at least 80 targets scored an average of 5.9 touchdowns. Thielen scored four. If his volume is comparable to last season (142 targets) his touchdowns should increase and lock in his third-round value.

Allen Robinson at 44 overall was an excellent complement to Thielen. I’m not expecting a 24% market share for Robinson in Chicago, but the possibility is there. Kevin White’s generated some preseason buzz, but Robinson will be the X receiver for Mitchel Trubisky in 2018. From a talent perspective, Allen profiles as a true No. 1 with the targets to match in an ascending offense. In a vacuum, the pick is valuable. However, there’s risk involved with it as I didn’t insulate Robinson with a higher quality receiver to ensure production at the position. Despite this, I had a balanced start with two running backs and two wide receivers. This approach left me with plenty of flexibility entering the 4/5 turn, but my focus was still running backs and wide receivers with the first tier of tight ends already selected.

I had properly mitigated the risk of selecting a suspended RB and acquired a piece of a high-powered offense. Ingram’s 230 attempts won’t be replicated, but it’s conceivable he continues his 15-20 touch per game pace with Kamara complementing his workload. In retrospect, both Rex Burkhead and Royce Freeman would have been suitable picks in the same range given my start. Each have their own concerns (e.g. workload, injury), but again, my early RB start made the pick a luxury pick. With that level of flexibility, the perceived better offense was the optimal decision given the format. If I had additional concerns, I could have selected a fourth RB in the 6th round to solidify the position. But, another RB with both a rushing and receiving role was acceptable for my squad.

Not to disparage Tim (@quantimturner), but the reactions in the chat were priceless. Chris Carson at 6.06 is bold, but it underscores a point about drafts in general. Get your guy. Fantasy football at its core should be fun. If you’ve taken the time to research a player, understand their role, and want to ‘plant a flag’…do it! Roberts Woods at 6.08 was a trade in opportunity. Alshon Jeffery’s injury concerns shifted my priority to another team with high-scoring potential. The Ingram selection negated my moving up to selected Edelman as I didn’t want to expose my roster to another suspended player. Robert Woods fit within the context of my team given his role on the Rams. It’s more narrative based, but I’m not convinced Brandin Cooks reduces Woods’ target share. Plus, the two-round discount for another Rams player allowed me to add some depth to my team.

Now turning to the 7th round, I began to tally the available quarterbacks and tight ends. The usual suspects for both positions had already been drafted. With the draft moving away from me after my pick at 77th overall, if the value was there I’d take a tight end.

Eliot Crist sniped Greg Olsen from me, but Walker at TE6 was still a value pick. Tennessee has one of the best schedules for tight ends. According to 4for4, Walker will be facing defensive units giving up an average 7.7 points per week to the TE position. His 6.3 PPG could see a boot with his Strength of Schedule, but he also has injury concerns coming out of training camp. Assuming he’s ready for the start of the season without lingering pain, he should perform to his price. However, there’s an argument for Jimmy Graham at the same cost. Better offense. Better quarterback. While his target share is the primary worry, his fantasy value should be buoyed by red zone opportunities. That’d make him well worth the 7th round cost in drafts.

Quarterbacks began flying off the board in the 7th and 8th rounds. This is typically where I’d take one and Drew Brees and Kirk Cousins have been frequent targets of mine at this price. But, Funchess at 8.08 seemed like another value pick. He’d be more valuable in PPR drafts, but his target share should make him more valuable than some of the other receivers selected before him. But with this move, I missed out on several high-end quarterbacks. I took a gamble and decided to wait on quarterback and continue to fill out my roster. If value and weekly upside presented itself, I’d take a QB there with streaming as a backup option.

Admittedly, I’d like this pick back. Johnson’s value has a stronger foothold in PPR drafts. He’s advocated for being converted to a slot receiver and has had only a limited number of carries (259 in three seasons). Players such as Giovanni Bernard (drafted at 9.09) or even Ty Montgomery (drafted at 9.07) hold more value in standard scoring formats. Both have hybrid usages on, theoretically, better offenses. He’d be my RB4, someone I wouldn’t have to use until bye weeks, but the projected fantasy output would be minimal. I wanted more upside at RB and looked to draft another in the 10th.

The run of mid-range RB2’s in the 9th and 10th rounds was expected. Many of the receivers selected in this range are better suited for PPR scoring formats. Their drop in cost was surprising, but understandable given the devaluation of receptions. Peyton Barber (drafted at 9.11) and Latavius Murray (drafted at 9.12) were preferred targets for my 116th overall pick. With both off the board, Corey Clement became an optimal selection. His 89 total touches on the season doesn’t look great, but he was in a three-way committee with LaGarrette Blount and Jay Ajayi. Blount’s out of the picture and camp reports indicate increased usage in the red zone. The Eagles haven’t traditionally leaned on a single RB to carry the load and Clement should be the primary beneficiary to the available touches.

Five running backs. Four wide receivers. Even with the scoring format, it wasn’t an ideal balance between the positions given the draft capital expended heavily favored RBs. In shorter drafts, it’s difficult to correct the imbalance, but this did serve as a learning experience for future drafts. I still needed a quarterback and at least two were on my radar entering the 11th round.

Sniped again. Jeremy Back (4for4) took my primary QB target with his selection of Matt Stafford at 11.01. Kerryon Johnson has generated some preseason hype, but Stafford should have a full complement of receivers to maintain his production. But, Ben Roethlisberger at 11.05 came at a significant discount (ADP: 8.08). The average touchdown rate for quarterbacks the past four seasons has been 4.6 for all QBs with at least 300 attempts. Roethlisberger has been under the average once. It helps when you have Antonio Brown and Le’Veon Bell as your primary weapons and the offense has only improved with the additions of Juju Smith-Schuster and James Washington. At his price, he encapsulates the value-hunting gamble I hoped to pull off by waiting for a QB.

That pick completed my roster in the sense that I had the onesie positions filled with depth and WR and RB. Now other gaps along with DEF and K could be considered. The remainder of the draft filled out as expected. Defenses were selected, and late-round darts were thrown. Overall, my largest errors were in finding value at running back. Drafting in primarily PPR and half-PPR formats develops habits that don’t translate as well to standard. Beware of this when switching drafts and, in the words of Denny Carter, adjust your rankings accordingly.