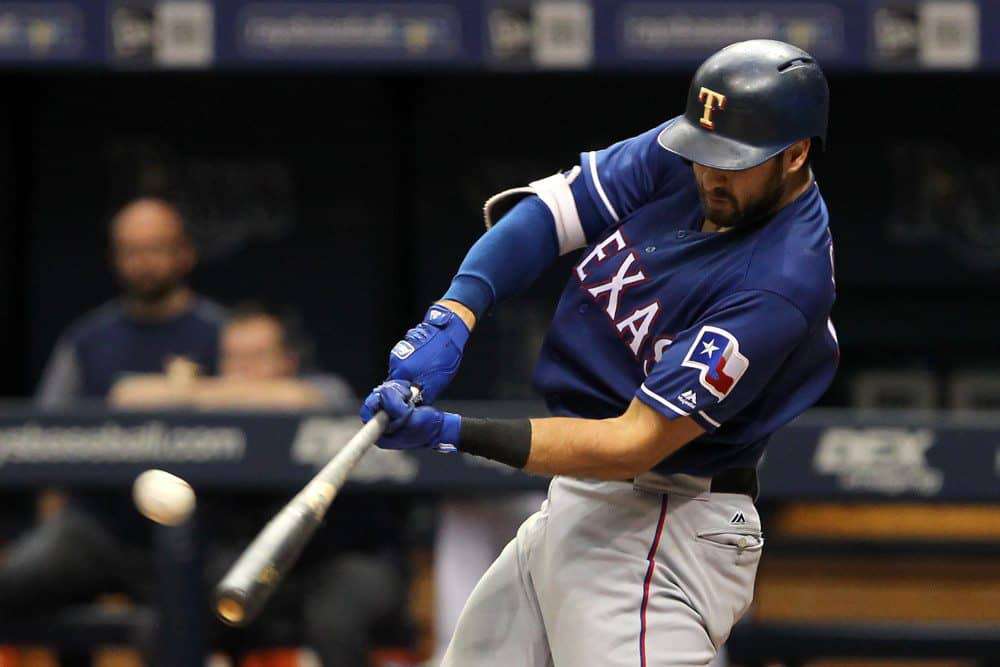 It can often be difficult to place into context how well (or how poorly) certain players have performed recently. A glance at ESPN’s Player Rater, which attempts to quantify a player’s overall fantasy value by analyzing their performance in each facet of the game, can focus targets for fantasy owners looking for help on the waiver wire. Of course, when dealing with small sample sizes, a player’s results can be fluky, but placement at or near the top of these lists could be indicative of a substantive change to a player’s profile. Here are the top 10 players at each position for the past 15 days, according to the ESPN Player Rater.

Willson Contreras has been scorching hot as of late, running a .333/.407/.750 line over the past two weeks. While Contreras’ .333 BABIP over that time does not scream oncoming regression, his 46.2% HR/FB rate does, as he is still hitting too many ground balls to be seen as a legitimately elite power threat. That said, Contreras undeniably possesses more offensive upside than most catchers. Unfortunately, he appears to be headed to the disabled list with a right hamstring injury. Cameron Rupp’s contact rate this season is down five percentage points from last, and the corresponding increase in strikeouts has dropped his batting average to .236. Rupp’s walk rate has more than doubled from last season thanks to a more passive approach, although, given that he plays on a weak offensive team and is completely devoid of speed, that matters very little for fantasy owners. If Rupp is owned, it is likely for his power upside, as he has an ISO near .200 for the second consecutive year. Rupp has hit three home runs over the last two weeks, increasing his hard contact and fly-ball rates slightly in the process, so his recent hot streak is not simply the product of luck. That said, Rupp’s changes are subtle, and, at 28 years old with declining secondary skills, he seems an unwise bet for a breakout. With the Phillies sitting at an MLB-worst 41-69, they have ample opportunity and motivation to cut back on Rupp’s playing time in favor of increased repetitions for rookie Jorge Alfaro, who seems more likely than Rupp to be an important piece of the next good Phillies team.

Perhaps baseball’s quietest superstar, Paul Goldschmidt has hit .435/.509/.826 since July 25, combining outstanding plate discipline and elite power with an above-average contact rate. Players with Goldschmidt’s overall toolset are extremely rare, and he is likely the top option at the position through the rest of this season. Joey Gallo’s placement on the Player Rater, predictably, is propped up by his absurd power production recently, as he has hit eight home runs in his last 51 plate appearances. Unsurprisingly, Gallo’s recent offensive approach has consisted of crushing fly balls to right field, an encouraging sign for a player whose sole calling card is his light-tower power. Of course, even during this home run barrage, Gallo’s strikeout rate is over 35%, and his .304 batting average is nearly entirely the product of balls being hit over the fence. Gallo’s approach is devastating for his batting average (even in this, his breakout season, he is hitting .210), but his pure power upside is undeniable, among the best in baseball. One small red flag for fantasy owners, however: only 38.9% of pitches that Gallo has seen this season, according to Pitch Info, have been located inside of the strike zone, lower than anyone else’s in baseball. Given Gallo’s subpar plate discipline (despite his elite walk rates, he still chases pitches out of the zone more than the average hitter does) and prodigious power, it stands to reason that pitchers will continue to work Gallo increasingly farther away from the strike zone, either until they find a way to retire him consistently or until he demonstrates stronger plate discipline and forces them to attack him in the zone once again. Neither result would be particularly useful to Gallo’s fantasy owners hoping that he can continue to perform as one of the game’s best power hitters. Despite pitchers’ avoidance of the strike zone when facing him, Gallo has hit 38 career home runs in under a full season’s worth of plate appearances and is only 23 years old, so the arrow is pointing decidedly upward here; he does, however, need to continue to prove that he can make adjustments to sustain his extreme offensive approach.

[the_ad id=”384″]The past two weeks have been vintage Dee Gordon, as he has hit .345 with five stolen bases. Gordon is second in baseball with 40 steals this year, and his .341 BABIP this season is actually down quite a bit from his prime seasons, despite his contact profile remaining intact. Gordon’s infield-hit rate has dropped by six percentage points, and, given that his elite speed is clearly still extant, there is little reason to believe that he can no longer consistently beat out infield hits. Given that he also has cut his strikeout rate this season and with Giancarlo Stanton’s recent reemergence as the league’s premier power hitter, Gordon should continue to steal bases and score runs at an elite clip. The Rays’ curious decision to trade Tim Beckham to Baltimore just prior to the trade deadline has resulted in a fantastic early return for the Orioles. Beckham has hit .500/.515/.938 in his first week in black and orange, en route to the AL Player of the Week award. While attributing any player’s success following a trade to a change of scenery can be dangerous, Beckham seems like the type of player who may most benefit from changing teams. Always seen as a disappointment after being selected first overall by Tampa in 2008 out of a Georgia high school, Beckham may very well have benefited from being removed from those expectations. Notwithstanding, Beckham did have some positive indicators, including a career-high hard-hit rate and contact rate, prior to the trade. Beckham chases too many pitches and makes too little contact to run solid strikeout-walk ratios, and he hits a few too many ground balls to be an elite power hitter. However, his contact quality should enable him to hit for an above-average BABIP, and he likely has 15-20 home run per year power. As a player with shortstop and second base eligibility, he should at least be a worthy reserve option, with the upside of a starting fantasy shortstop in the event that he does tighten up his plate discipline.

Eduardo Nunez has hit .393/.393/.750 over the last week following my renewed note of skepticism regarding the sustainability of his profile. Nunez’s extreme pull approach has remained over this time, although he has hit a few more fly balls, accounting for his two home runs. It seems unlikely that this recent hot stretch indicates that Nunez has reached a new level as an offensive performer, but there is little doubt that Nunez has been locked in recently, and he does offer positional versatility and speed upside. Derek Dietrich has hit .313/.370/.646 since July 25, with a 57.9% fly-ball rate supporting his three home runs. Dietrich has a season-long fly-ball rate of 42.6%, so it does not seem like he will continue to lift the ball at this rate. Even if his recent home run spike is unsustainable, Dietrich may be an underrated offensive contributor to be found on the waiver wire. His hard contact rate is at a career-high level, his strikeout rate is at a career-low, and his batted ball profile would indicate that he deserves a higher BABIP than the .287 mark he is currently sporting. Some positive regression in the BABIP department alone could vault Dietrich into .270/.350/.445 territory, which would make him a solid, if unspectacular, second base option. Unfortunately, Dietrich lacks the power or speed upside to make him a true breakout candidate. However, he is likely much more talented than his current .246/.320/.409 line would indicate.

Alex Bregman continues to rake, having hit a stellar .341/.417/.805 with only two strikeouts since July 25. As Greg Jewett of Fantrax noted recently, there are reasons to buy into Bregman’s outburst as legitimate. Andrelton Simmons has quietly broken out offensively this season. Simmons makes contact at an elite rate, his ground ball rate has dropped four points, and his hard contact rate has jumped eight points, resulting in a slight power boost. Simmons pulls quite a few ground balls, making him susceptible to a lower batting average than his elite ability to avoid strikeouts would suggest, although his improved contact quality this season has manifested itself in a .025 point jump in his batting average. Simmons’ jump in contact quality and air balls have seemingly made him more of a power threat, as he has eclipsed double-digits in home runs for the first time in four years, and he has already set a career-high in stolen bases as well. Simmons does not have a single tool that jumps out (with the exception, of course, of his league-best glove), but he has developed into a well-rounded offensive player, making himself fantasy-relevant for the first time since his trade to Anaheim.

As noted earlier, Giancarlo Stanton has regained his place as the league’s best power hitter. Stanton’s last two weeks have seen him hit six home runs. His contact quality this season is actually down somewhat, as he has seemingly made the tradeoff of some power for an improved contact rate. Recently, however, Stanton has had the best of both worlds, making more contact and hitting for power. Stanton has as high a ceiling as nearly any player in baseball because of his power, and his cutting his strikeout rate by six points this season has enabled his top-of-the-scale raw power to play more consistently in games. Manuel Margot has hit .309/.316/.618 since July 25, although his peripheral statistics over that time are relatively uninspiring. Margot has benefited from an unsustainable line drive rate, and his soft contact rate sits above 30% recently. Altogether this season, Margot has proven a capable but unspectacular offensive player. His elite minor-league stolen base totals have not translated to the big leagues, he does not have elite power and his batted ball profile is lacking. In dynasty leagues, Margot is worth buying for his power and speed upside, but in redraft leagues, he is likely worth leaving on the waiver wire.

Zach Davies’ recent run has been supported by an extraordinarily low BABIP, with a 15:5 strikeout-walk ratio solid but certainly not overpowering. Davies’ stuff is mediocre, but he is getting more run on his sinker than ever before this season, allowing him to induce ground balls at a career-high clip. Without a true out pitch and in a hitter’s haven, Davies is best deployed selectively, although his ground-ball tendencies and Milwaukee’s strong team offense give him a chance to accrue some wins. Dylan Bundy has also been the beneficiary of some fortunate ball-in-play results, although, unlike Davies, he has had strikeout stuff to back it up. Bundy’s two most recent starts have seen him allow only two runs with a 15:1 strikeout-walk ratio, although he has given up quite a few fly balls in that time, a dangerous game for an AL East pitcher. Both his slider and changeup are capable of generating whiffs, however, and his three-pitch mix and solid command make him a solid option moving forward, even if he will likely continue to be prone to the home-run ball because of a lackluster ground ball rate.

Each of the relief pitchers on this list has been propped up by high save totals. All seem safe bets to close for their teams moving forward, with team performance more important to their continued save totals than anything specific to the pitchers themselves.