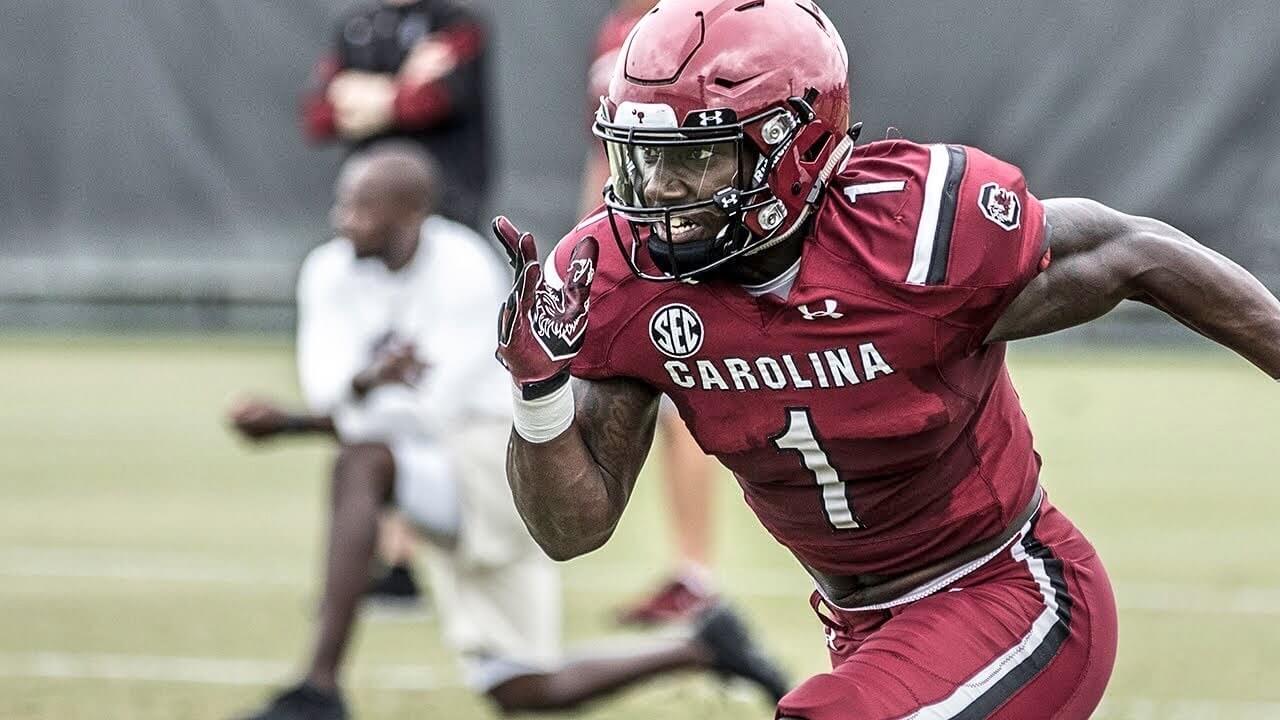 Gary Davenport is in search of Dynasty wide receiver values for 2019 fantasy football.

If you’re the type of dynasty fantasy football owner who likes consensus, then 2019 just isn’t your year. At both the wide receiver and running back positions, there’s no clear-cut, slam-dunk No. 1 guy. It’s especially true among the pass-catchers. There are going to be a handful of wideouts who go on the first day of the NFL draft, and there are a few that most pundits believe are relatively safe bets in that regard.

However, the farther you get into that first round and then into the draft’s second day, the more quickly agreement dries up. For every draftnik who believes that Receiver X could be drafted late in Round 1, there’s another who believes that same player could fall into the third round.

There are going to be players who fall into the second half of Round 1 (or even later) in dynasty rookie drafts who we will later discover shouldn’t have. It’s going to present dynasty fantasy owners with bad teams a chance to double-dip—pairing that value play with one of this year’s top prospects. It will also allow dyno owners who had a successful 2018 a chance to add an impact player—someone who can help them get back to the fantasy playoffs this year.

What this class lacks in high-end star power it makes up for with depth—provided fantasy owners choose the right receiver.

These wideouts all have the potential to be that guy.

It’s a big year for big-bodied receivers, and as Austin Gayle wrote for PFF Arcega-Whiteside’s ability to go up and get the rock is unmatched in this class. “Arcega-Whiteside’s size, body control, and contested-catch ability paid dividends in the red zone,” Gayle said. “He caught 23-of-34 targets for 224 yards, three first downs and 18 touchdowns inside the 20-yard line in 2017 and 2018 combined. He also logged just one drop and caught 11-of-16 (68.8%) of his contested-catch opportunities in the red zone, as well. Among the 42 FBS wide receivers in this year’s draft with 20 or more targets in the red zone since 2017, Arcega-Whiteside ranked first in receiving grade (93.9), second in touchdowns (18), and 13th in passer rating when targeted (101.0).”

At 6’2″ and 225 pounds, Arcega-Whiteside has the frame and physicality that NFL teams (and dynasty fantasy owners) covet. He also has good wheels for a player that size after posting a 4.49-second 40-yard dash at Stanford’s Pro Day. The son of basketball players, Arcega-Whiteside shows those bloodlines while high-pointing catches, and in the right offense he could be a red-zone threat from Day 1—and eventually a No. 1 receiver.

There are some draftniks who are quite high on Butler this year. As a matter of fact, Bill Huber of 247 Sports slotted Butler as the No. 1 wideout in his class. “Butler was too big, too fast and too strong for Big 12 foes,” Huber said. “Butler won deep (class-high 19 receptions on passes thrown 20-plus yards downfield) and short (23 receptions in the slot). With his size and physicality, he’s a nightmare in the red zone and contested-catch. Much like Julio Jones, he’s just too big to be taken down by many defensive backs. Just imagine being a 200-pound defensive back facing 227 pounds of Butler, his brute strength and ridiculous 35 1/4-inch arms. Too strong, too fast, too long. And for a big guy, he’s a solid route-runner.”

Butler isn’t just big and strong—he also showed pretty good speed in peeling off a 4.48-second 40 in Indianapolis. However, Butler was also prone to the occasional lapse in concentration and the dropsies in Ames, and it’s generally thought he won’t hear his name called until the draft’s second day. Of all the receivers listed here, Butler will likely be the first taken in dynasty rookie drafts—quite possibly inside the back part of the top 10. He also has the profile of a true No. 1 receiver—provided he lands on a team that needs one.

Jeff Ratcliffe of Pro Football Focus (who is a good guy—just don’t tell him I said so) ranked the 6’0″, 205-pound Campbell eighth among this year’s wideouts. “Campbell really emerged in his senior year as Dwayne Haskins’ top target with a team-high 111 targets,” Ratcliffe said, “catching an impressive 82% of them. Blazing fast, Campbell tied for the fastest 40-yard dash among wideouts at the combine (4.31), led the short shuttle (4.03), and ranked fifth in the vert (40). His 2018 efficiency and off-the-charts athleticism make him a dynasty name to keep an eye on. That said, he doesn’t necessarily profile as a traditional fantasy option at wide receiver.”

That outstanding combine has caused Campbell’s draft stock to rise—he’s made recent appearances in the first round of some mock drafts. But it remains more likely that he’ll be taken at some point in Round 2. Campbell’s a work in progress as a receiver with a limited route tree who was more catch-and-run guy in college than downfield threat. But he’s also a threat to take it to the house every time he touches the ball. Think of him as a slightly more developed Curtis Samuel.

Hurd’s a fascinating case—a 6’5″, 226-pound converted tailback with good speed who benched 23 reps of 225 pounds at the combine. After rushing for over 2,600 yards at Tennessee, Hurd transferred to Baylor, switched to receiver and won Big 12 Newcomer of the Year. He’s the biggest “project” of the wideouts listed here—he needs a lot of work on the technical aspects of his game. And he’s not a great bet to help fantasy teams in 2019. But as Brad Kelly wrote for The  Draft Network, there’s a lot to like athletically.

“With a strong performance at the Senior Bowl,” Kelly said, “it feels like an NFL team will fall in love with Hurd’s ability and take him in the middle rounds. Few prospects have changed positions as seamlessly as Hurd, and he fits the mold of an NFL wide receiver on a physical profile and athleticism basis. The natural tools that he has showed on his tape in his lone season as a wide receiver, and could reach new heights in the NFL. As far as usage in the NFL goes, Cordarrelle Patterson’s season in New England is the place to start. With the ability to be used as a running back in a pinch, and thrive on outside zone and sweep concepts, Hurd can help a team’s running game. However, with a developing game as a wide receiver, he projects as a “big slot” who can win either up the seam or on the edge in space.”

After tearing up the FCS at UMass and turning heads at the Senior Bowl and combine, Isabella earned a comparison to Tyler Lockett of the Seahawks from Mike Tagliere of Fantasy Pros. “I believe there’s some differences in their body types,” he said, “but Tyler Lockett is someone who Isabella can be compared to. Lockett does his best work in the slot and has massive speed to stretch the field no matter where he is on the field. We saw him flourish with Doug Baldwin missing time last year, which was likely due to him moving into the slot in what was almost a full-time role. Lockett isn’t built as solidly as Isabella is and can’t absorb some of the bigger hits, but they offer similar potential in an offense.”

To say that Isabella is a bit undersized is something of an understatement—he checks in at just 5’9″ and 188 pounds. However, he’s also smoking fast—Isabella’s 4.31-second 40-yard dash in Indianapolis tied for the fastest among all receivers. The level of competition Isabella faced in college is a concern, and he needs to learn to catch passes with his hands rather than his body. But he has the skill-set to become a true weapon from the slot at the NFL level.

After watching tape on Samuel, Stephen White of SB Nation came away convinced that the list of things Samuel can’t do is a short one. “If you need a guy to line up wide, Samuel can certainly do that,” White wrote. “If you need a slot receiver, well, he can do that, too. Whatever role you need him to play, Samuel can fit right in. Besides, with Samuel’s superior run-after-the-catch ability, you basically just want to find a way to feed him the football, anyway. That includes jet sweeps and end-arounds, by the way. South Carolina had him running all kinds of routes, too, so Samuel shouldn’t have a hard transition to an NFL route tree. He is going to be ready to play from day one from a preparation standpoint. It will just be a matter of how his new team decides to use him.”

I’ve been beating the fantasy drum for Samuel ever since watching him dominate every cornerback not named Rock Ya-Sin at the Senior Bowl. Samuel isn’t especially tall (5’11”), nor does he have blazing speed. But he is one of the better route-runners in this year’s class and tenacious in going after the football and after the catch. In an era where slot receivers are more valuable than ever Samuel has the potential to be a really good one in short order—and a PPR monster in fantasy football.