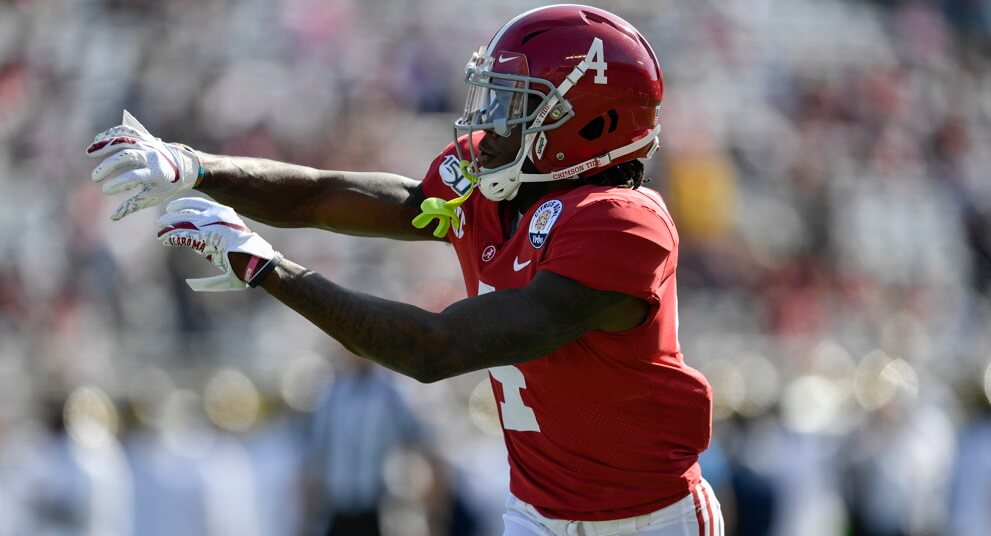 In last week’s version of the Dynasty Rundown, I previewed what is traditionally the most reliable position for fantasy rookies, the running back spot.  For the next two weeks, I am looking at one that traditionally is much less reliable, the wide receivers.  There is reason to have some optimism with the class of 2020 however, as it is one of the deepest rookie wide-out classes we’ve seen in a long time.  There is a lot to be excited about in terms of dynasty rookie wide receivers heading into 2020.  So much so, I am spending two weeks covering the guys you need to know for your dynasty draft.  Let’s get on with part one!

Ruggs to the Raiders is a match made in heaven, and everyone expected it to happen.  However, much to the benefit of John Elway and Jerry Jones, the burner from ‘Bama was the first wide receiver taken off the board at pick 12.  In his final season at Alabama, Ruggs averaged 18.7 yards per reception, while starring alongside fellow first-rounder Jerry Jeudy.  His speed made him into a weapon that SEC defenses had to pay special attention to.  With a 4.27 40 time, he will force NFL defenses to pay extra attention to him as well.  Ruggs will also benefit from the Las Vegas wide receiver corps being rather thin, which will have Derek Carr and Jon Gruden looking for ways to get the ball in his hands.

Ruggs will get targets in the passing game from day one.  Count on an adjustment period for the youngster to figure out how to best use his speed against NFL level cornerbacks.  His hands will allow him to take screen plays and short crossing routes and extend them into big plays. With Kansas City playing basketball on grass, and the Broncos upgrading their offense in the same division, the Raiders will need his home run ability. With his main competition coming from Tyrell Williams and Hunter Renfroe, he couldn’t have asked for a better situation than with the silver and black in Las Vegas.

What I expect this year:  60 receptions, 850 yards, and five touchdowns aren’t out of the question.

What I expect beyond:  Big plays for days, and a YAC machine as long as he has a capable quarterback to get him the ball.  As far as dynasty rookie wide receivers go, he will be one of the first off the board.

Broncos’ GM John Elway was rumored to be looking to trade up for a wide receiver in the first round of the draft.  Christmas came early in Denver, as they got one of the top receivers on every draft board, and didn’t have to give up anything.  Arguably, the most complete receiver in the draft, Jeudy brings 4.45 speed, and sharp route running that will pair well with 2019 breakout wideout Courtland Sutton.  While not a monster at 6’1” 193, his route running should help him acclimate quickly to the pro game and gain the trust of the coaching staff.  The main knock on his game is while having a flair for big plays, he had a few too many drops on catches that should have been easy.

I love this landing spot for Jeudy, as he will be the Robin to Courtland Sutton’s Batman.  Fellow rookie K.J. Hamler adds an explosive slot weapon in the passing game to complement the outside guys.  Drew Lock has the vote of confidence as the starter, which scares me a bit.  It remains to be seen if he’s the guy long term, but he’s the guy right now.  Jeudy’s production depends heavily on Lock’s progression in his first full year as a starting QB.  Here’s to hoping teams will be able to conduct something resembling training camp this summer so rookies can work with their QBs heading into the 2020 season.

What I expect this season: 50 receptions, 800 yards, and six touchdowns

What I expect beyond:  Jeudy will form one of the best wide receiver tandems in the league for years to come.  His production depends upon whoever is Denver’s quarterback.  Dynasty rookie receiver gold!

I don’t think too many people expected this one, but boy is this an instance of Jerrah being Jerrah or what?  Much like Denver, Dallas benefited from another one of the top passing targets in the draft sliding to them at pick 17.  Lamb has a nose for the end zone, recording 32 touchdowns in his three seasons at Oklahoma, including 14 in his final season.  With 4.5 speed and his ability to win jump ball contests, he will slot in nicely behind Amari Cooper and Michael Gallup as the third option in Dallas.  This should give him time to improve upon his route running and technique against NFL caliber defensive backs.

Lamb landed in an excellent spot for fantasy production.  His arrival could mean Cooper’s days are numbered in Dallas, paving the way for Lamb to become the lead dog.  This only adds to his already heavy dynasty appeal.  Assuming the Cowboys work a deal with Dak Prescott there shouldn’t be any questions at the position.  Of the top three receivers in the draft, Lamb gets the best QB of the lot.  There won’t be a lot of pressure on him in year one, which allows him to learn the pro game behind some talented wide receivers, but could hamper his production a bit in year one.  His long term outlook will make him the first dynasty rookie wide receiver off the board in many drafts.

What I expect this year: Lots of mouths to feed in Dallas means 45 catches, 750 yards, and five touchdowns.

What I expect beyond:  Lamb blossoms into one of the top ten wide receivers in the league, giving you a dynasty fixture for a decade.

The fourth wide receiver off the board in the 2020 draft finds himself in one of the better landing spots from a depth standpoint.  Reagor slots in behind a 30-year-old Alshon Jeffery and a 33-year-old Desean Jackson in Philadelphia.  Jeffery may not be an Eagle by the time the season starts due to his hefty salary and lack of health.  Jackson has never been a target machine and isn’t getting any younger.  Reagor is a bit of a mystery, as his production dipped in 2019.  Scouts questioned his motivation, but TCU quarterbacks didn’t provide him much help either.  His athletic ability is unquestioned, but his receiver play is in need of some work.

Reagor is a ways off from being a number one on the depth chart.  For now, he seems to be more of a complementary piece to an offense.  With the ball in his hands, his play-making potential is up there with the top offensive weapons in the draft.  His fantasy value depends heavily on the Eagles coaching staff using him correctly.  Of the receivers covered so far, he is one of the biggest projects, which I expect hampers his production in year one.  Down the road, he could be an impact player.

What I expect this year:  If Jeffery leaves it will force Reagor into more targets, but it will be a big learning curve for him. His numbers are tough to predict.  I wouldn’t expect much.

What I expect beyond:  He could blossom into a dynamic play-maker, if he learns the position.  Even if he doesn’t fully adapt, he will be useful as a flex play, with plenty of potential for more.  He’s a dynasty rookie receiver I will most likely stay away from.

Jefferson would have been an excellent fit in Philly, but their loss is the Vikings gain.  Jefferson is an excellent fit in Minnesota.  With Stefon Diggs headed to Buffalo, the LSU product slots in behind target monster Adam Thielen on an offense that surprisingly finished 2019 eighth in the league in scoring.  Jefferson is solid with the ball in his hands and makes athletic adjustments to make catches on less than perfect throws.  It will take him a bit to polish his route running.  Despite that, he can step into the Vikings offense and be a fantasy asset in year one.

Jefferson will contribute right away and will benefit working alongside Thielen in learning how to succeed at the pro game.  I believe he is able to contribute right away as a WR3, with much more coming down the line.  He is in a much better landing spot for fantasy purposes in Minnesota than he would have been in Philadelphia  He may not get the 94 targets Diggs saw in 2019, but as long as he stays healthy, he should be close.

What I expect beyond:  Plenty of WR1 upside here.  His route running will be good enough paired with his ball skills and play-making ability.  He will be one of the top dynasty rookie receivers off the board.

Check back soon for part 2 of Ron’s look at this year’s crop of rookie wide receivers. In the meantime, you can get his take on rookie quarterbacks and running backs.