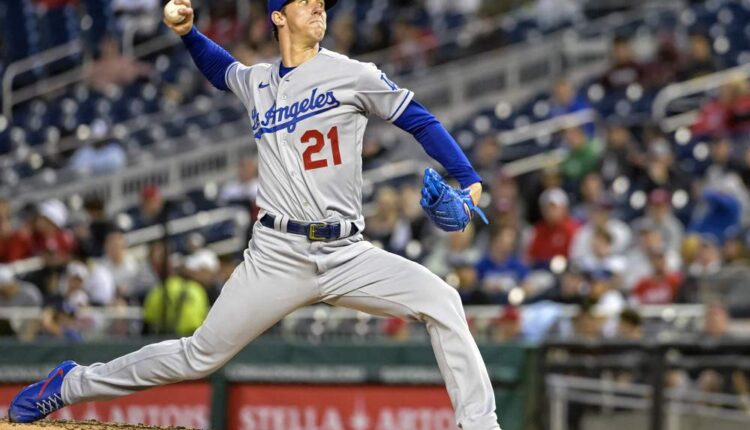 After detailing some dynasty risers and fallers on the hitting side last week, I’m diving into some pitchers today, discussing a bunch of arms that rose or fell in my latest top-500 upside including some former aces and big-time breakouts this season.

While his scoreless innings streak has come to an end, Zac Gallen reminded everyone that 2021 was an anomaly. Gallen has recorded an ERA under 3.00 in three of his four Major League seasons, including his career-best 2.52 mark this season across 164 innings. Gallen has also dropped his walk rate to a career-low 6.7% while maintaining a solid 26.1% strikeout rate. While he’s not the flashiest arm around, Gallen gives me plenty of Aaron Nola vibes as an underappreciated ace that sticks in the SP 7-13 range with low ratios and a good but not elite strikeout rate.

How good has Spencer Strider been this season? Well, he just broke Randy Johnson’s record for the least innings pitched for a rookie to get 200 innings. That’s pretty remarkable. But if you’ve watched Strider pitch this season, that shouldn’t come as much of a shock to you. In 131.2 innings, Strider has dominated to the tune of a 2.67 ERA and 0.99 WHIP along with an 8.5% walk rate and a ridiculous 38.3% strikeout rate. For pitchers with 100+ innings, Strider leads the Majors in strikeout rate and K-BB rate, and frankly, it’s not even close in either category. On top of that, Strider ranks among the leagues best with a 3.49% whiff rate, .179 xBA, and .279 xSLG.

Any way you slice and dice the metrics, Strider has been a stud. In this update, I moved him up to SP13, which I believe is fair given his mix of upside, track record, and performance. Plus, the names in front of him are aces that have been around the block a time or two. But with Strider’s elite 4-seam/slider combination and bat missing ability, his ascension should only continue in future updates, perhaps into the top-5 by mid-2023.

The quality start king received a nice boost this update, and I probably could’ve gone even higher. The last time Framber Valdez didn’t record a quality start was way back on April 19th and the last time his ERA was above 3.00 was following his start on May 7th. Valdez might not provide an elite strikeout rate (23.2%), but the volume he provides is extremely valuable and he’s developed into one of the safest pitchers in baseball because of it. It wouldn’t shock me to see his strikeouts tick up a bit more either if he decides to increase his curveball usage a bit. With his performance this season, Valdez has firmly put himself into SP2 territory moving forward in all formats.

Admittedly, I’ve always been a bit reserved on ranking Triston McKenzie given his frame, back issues, and overall durability. All of those concerns still factor into my ranking of him to a degree, which is why you’ll likely see him a bit higher in other rankings. But with how he’s pitched this year, a bump was warranted. McKenzie has a stellar 3.08 ERA and 0.97 WHIP through 172.1 innings this season with a 6.4% walk rate and 24.9% strikeout rate.

Moving forward, McKenzie is more of a sell than a buy for me though. His ERA indicators suggest he’s been a tad lucky this season and he still gets hit fairly hard in general, allowing a 10.1% barrel rate, 90.4 mph AVG EV, and 41.1% hard-hit rate. So while I’m a believer in him as a top-50 SP or so moving forward, I’d entertain offers for him this offseason to see what you could get back. Plus, his back and durability issues still stick in the back of my mind.

Once again, the Tampa Bay Rays worked their magic and found plenty of value in both Drew Rasmussen and Jeffrey Springs this season.

Rasmussen actually had an ERA under 3.00 last season as well and has been steadily improving in each of his three Major League seasons. After having an ERA over 5.00 and a walk rate of 12.7% back in 2020, both of those numbers have taken a nose dive over the last two seasons, although, so has his strikeout rate which sat at a pedestrian 22.4%. While I’m not a believer in his ERA remaining under 3.00, Rasmussen has some staying power as a borderline top 40-50 arm given his improved command and control along with his ability to limit hard contact in the air and post a groundball rate around 50%.

As for Springs, the 29-year-old southpaw was an even bigger surprise than Rasmussen this season. Springs had some success last season, but strictly as a reliever. In fact, he only had two career starts entering 2022, and those came back in his rookie season. Springs works primarily with a 4-seam/slider/changeup mix, with each offering recording a BAA under .250 and wOBA under .325. None of the three elicit a high whiff rate on their own, but overall, Springs recorded above-average whiff and chase rates with a rock-solid 20.5% K-BB mark. As with Rasmussen, I’m not anticipating Springs producing more top-25 SP seasons, but he should be valued as a top-50ish SP moving forward.

While he’s currently on the IL, Justin Steele was a waiver wire gem for fantasy managers this season. In 24 starts for the Cubs, Steele recorded an impressive 3.18 ERA with a 1.35 WHIP, 9.8% walk rate, and 24.6% strikeout rate. Those might not seem overly impressive on the surface, but that’s because Steele began the season with a 5.40 ERA in 40 innings through the end of May.

However, since June 1st, Steele has had an exceptional 2.05 ERA and 1.24 WHIP, and also had a 35.4% strikeout rate in August. His WHIP remains higher due to his 9.8% walk rate for the season, but that has dropped around 1.5% since June 1st. Steele also does a phenomenal job at limiting barrels and hard contact in general while keeping the ball on the ground over half the time. I’m still a bit leery given his propensity to allow base runners, but if Steele can keep his walks in check, he has top-50 SP value moving forward.

This is now two Tommy John surgeries on Walker Buehler’s pitching elbow, the latest putting him out of acting until 2024. It’s not like he was pitching well before the injury either, sporting a pedestrian 4.02 ERA, 1.29 WHIP, and a career-worst 21.9% strikeout rate. Maybe the elbow played a part in Buehler’s struggles. Who knows. But what we do know is that Buehler will likely not provide any value to our fantasy teams for 19 months or so and coming back from a second Tommy John surgery isn’t quite as cut and dry as the first one. Now it becomes increasingly concerning. I’m not opposed to buying low, but the price would have to considerably drop from ace level to get me to dance in trade negotiations.

Just when you think the 2022 season for Lucas Giolito can’t get any worse, it does. After posting a 4.69 ERA and 1.40 WHIP before the all-star break, those numbers have risen to 5.69 and 1.63 respectively since the break. Giolito has also seen his strikeout rate drop from 27.1% to 22.5% and walk rate rise from 8.5% to 9.2%. The first-half metrics were bad enough from an arm drafted and valued as an ace, but now Giolito has gone from bad to unusable in all fantasy formats.

But what should you do in dynasty? For me, he’s a hold. You’re not going to get solid value for him via trade right now and he’s actually been a bit unlucky this season with a 4.41 xERA, 4.16 FIP, and 3.65 xFIP along with a lofty .365 BABIP. I’m not expecting a return to ace levels of production, but Giolito could get back to top-30 levels as a back-end SP2 or high-end SP3 moving forward, making him a decent buy-low candidate in dynasty leagues.

After being a big Matthew Liberatore guy following the 2018 draft, my interest in rostering him for dynasty has dropped considerably each year. Let’s ignore the high draft pick and top prospect pedigree for a minute and look at the stuff and track record. While Liberatore was okay before the pandemic, his performance in 2021 and 2022 has been lackluster, to say the least. When you combine his Triple-A stats from the last two seasons, Liberatore has a 4.66 ERA and 1.33 WHIP across 227.2 innings with a 23.4% strikeout rate. And in the Majors Liberatore has a 5.46 ERA in 29.2 innings.

Yes, it’s Triple-A and he was a bit young for the level, but I’m not going to sit here and say he was unlucky or has the stuff to push past that. Liberatore’s fastball is extremely mediocre and the metrics so far back that up with a .364 BAA, .727 SLG, and .471 wOBA. He’s also not one to create a ton of whiffs or get hitters to chase outside the zone. At best, I believe we’re looking at a back-end rotation arm that posts and ERA and WHIP around 4.50 and 1.30 with maybe a league-AVG strikeout rate. Possibly not even that.

Removing these two from my top-500 stung. Both are former top pitching prospects that I’ve been very high on, and to some degree, remain high on. At least regarding their talent anyway. If you’ve watched either Sixto Sánchez or Nate Pearson pitch, their upside is undeniable. However, neither can stay on the field at all and both will end with a big goose egg in their 2022 innings pitched column. I’m not fully out on either given the talent and upside, but their track records forced me to bump both out of my top-500 for now. If you can get them for dirt cheap in dynasty, I’d be intrigued, but don’t give up much to acquire either of them.

Fallers That I’d Stay Away From Until The Price Was Low Enough: Jose Berrios, TOR | Eduardo Rodriguez, DET