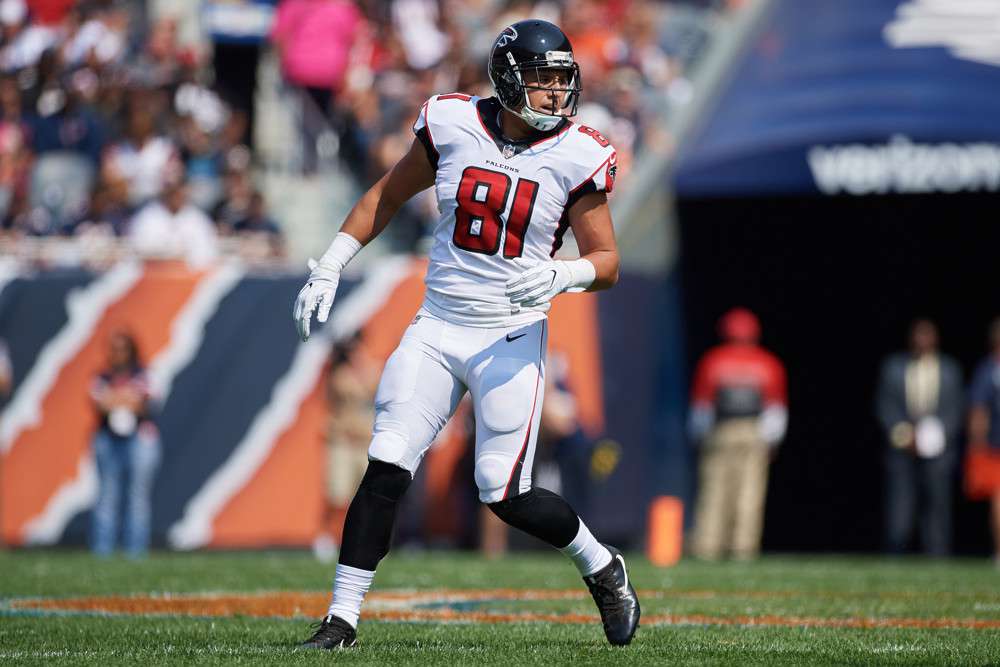 A new tight end enters the elite stratosphere. A sleeping giant is awoken. Let’s take a gander at the latest and greatest dynasty storylines in another edition of the Dynasty Football Stock Watch!

While dynasty football looks forward, we still have to take care of the here and now! For help getting ready for NFL Week 7, check out our Week 7 Waiver Wire Recommendations and our Week 7 FAAB Guide.

We tend to get so wrapped up in the exception that we overlook the rule. And one of the basic tenets of dynasty football is that tight ends are notoriously slow to develop. Tasked with essentially learning two NFL positions and often transforming their physique, tight ends take time. So when we see rookies like Evan Engram and Hunter Henry step into the limelight from day one, it’s easy to forget that they are the exceptions.

Austin Hooper is the rule. Slow, methodical development. Through his first three seasons, Austin Hooper has matched or increased his receptions, yardage, and touchdowns each successive season. Hooper has improved each and every season in the NFL and this year is no different. On pace to set career highs again in each meaningful statistic, he has ascended into the upper echelon of dynasty tight ends.

Austin Hooper already has 480 receiving yards, 2nd most among TEs behind Travis Kelce and 8th most of all receivers. He's on pace to nearly double his previous career high in yards. With Evan Engram continuing to have injury issues, I think Hooper takes his top 5 TE spot. pic.twitter.com/C0OwJ0dvV4

Operating as a high volume chain mover in a high octane offense, Austin Hooper is a high floor, high ceiling player attached to a stable quarterback. Health permitting, he should remain an elite tight end option for the next 7 seasons or so.

There was a time when fans and draftniks debated Marcus Mariota versus Jameis Winston in the NFL Draft. Imagine spending your precious time advocating for either of them as a franchise quarterback. Those are moments that could’ve been spent with family members. Moments we’ll never get back. While the Winston wagon continues to wobble off course, Mariota’s mantle has officially been passed.

Ryan Tannehill enters Week 7 with the keys to the Titans offense. Despite the Titans likely pursuing another franchise quarterback over the next season or so, Tannehill at least had a history of multiple 4,000-yard seasons with 24+ touchdowns. Suddenly, the Titans have a quarterback that ushers fantasy viability into the receiving corp. And no player stands more to gain than third-year wideout Corey Davis.

Tannehill does a really good job of keeping his eyes down field, gets the ball out quickly, and finds Corey Davis for a 1st down. #Titans pic.twitter.com/SuUJaYz3Zl

After a palpable jump in production during his sophomore season, it was fair to expect Corey Davis to take another step forward this season. However, limitations at quarterback and a run-heavy scheme have handicapped those efforts. While nobody is expecting the Titans to shift to a pass-happy offense, Tannehill is at least capable of delivering the ball to his weapons. Corey Davis boasts an impressive profile and wins with length and athleticism. It would not be surprising to see him salvage his season into the 1,000-yard range.

Tennessee has taken the first step toward eventually attaching Davis to a franchise quarterback. No longer handicapped by Marcus Mariota, Corey Davis’ best dynasty days are ahead of him.

Coming out of Stanford University, J.J. Arcega-Whiteside was lauded for his intelligence and vice grips for hands. Shockingly, Arcega-Whitesides’ strengths have haunted him as weaknesses during his rookie campaign. JJAW has consistently been on a different page than Carson Wentz and has displayed difficulty securing the football. Young players are expected to struggle as they overcome their weaknesses and adjust to the NFL game, but watching a player have issues with their perceived strengths begs alarm.

Thrust into meaningful playing time due to teammate injuries, JJAW has seen his opportunities dwindle as he continues to fail to capitalize. It’s worth noting that Davante Adams struggled horrendously through his young career before turning into an elite dynasty wide receiver, so hope is not lost. Operating in a promising offense that should clear out room for opportunities over the next off-season or so, J.J. Arcega-Whiteside has plenty of time to right the ship. But if you’re looking for early indications of optimism, JJAW hasn’t given us any.

I know what you’re thinking. Three straight weeks of tight end penny stocks?! Well, you get what you get, and you don’t get upset.

Despite sitting on the shelf for the entirety of his rookie season thus far, Sternberger’s stock is on the rise again. Slated to return for the second half of the season, Jace Sternberger could carve out a role. Despite being force-fed targets, Jimmy Graham has let his opportunities fall through his hands, often literally. Most affinity for Graham’s game is wrapped in nostalgia. Laboring through consistently ineffective play, Graham’s struggles create a golden opportunity for the third-round rookie. As I mentioned earlier, tight ends take a good amount of time to develop, but Sternberger’s purchasing window is appetizing. Knock on Sternberger and be patient. The kid has Zach Ertz upside.

With Graham & Tonyan either ineffective or banged up there is a big opportunity for him in the 2nd half of the year.

Here is a refresher of his game. Tough, fluid, versatile. pic.twitter.com/rgC8g7UsSi