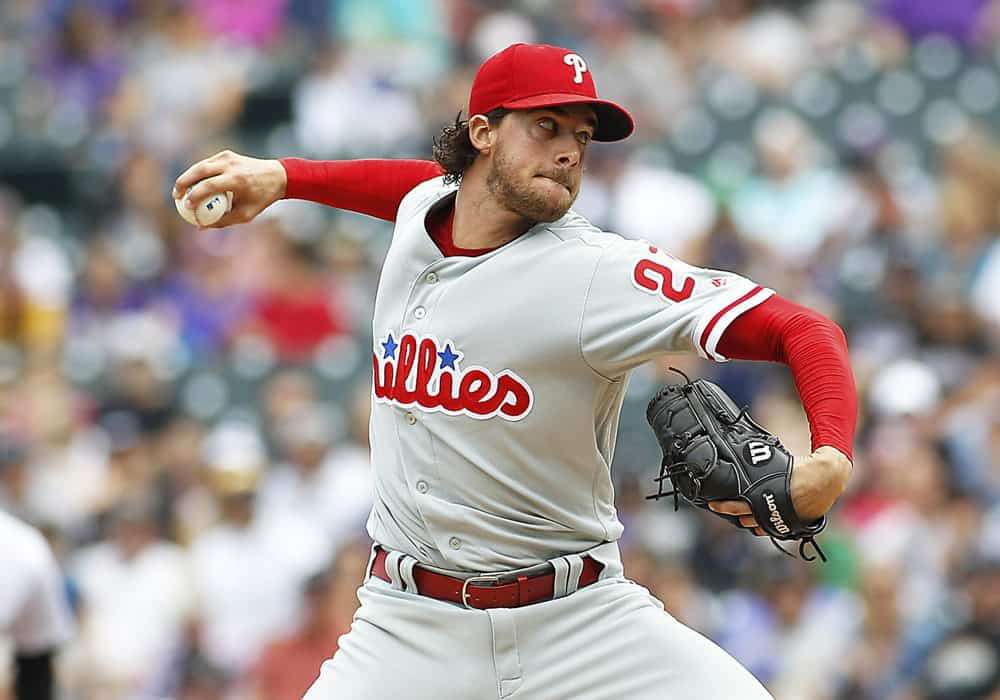 In last week’s Dynasty Dugout, we took a look at four sleeper keeper candidates in the outfield. This week, we focus on a trio of high-upside hurlers that are flying under the radar to some degree in keeper leagues.

It’s been a lot harder finding quality pitching this year than in year’s past. Offense is up, and obviously, that means pitcher ERA is up as well. They kind of go hand in hand for the most part. It’s also been a really weird year for pitchers all around. Basically, every elite name outside of Chris Sale has gotten injured at one point or another this season. We also went through a stretch where Ervin Santana and Jason Vargas were two of the best pitchers in the league. Like I said, weird year.

The below three pitchers all have good to great long-term potential, but their values haven’t quite caught up yet for one reason or another. Keeping them now could pay big dividends for your fantasy squad next year and beyond.

There haven’t been many bright spots for the Philadelphia Phillies this season outside of the Rhys Hoskins Show here in August. However, if you’ve been paying attention, there’s been an under-the-radar pitcher in Philly that has quietly been putting together a very good season. That pitcher is Aaron Nola.

When you first look at Nola, nothing about him blows you away.  He’s never going to light up a radar gun or be an imposing force on the mound, but man, does he know how to pitch. Nola is going to be one of those pitchers you see pitch into his 40s due to his sheer knowledge on how to pitch and approach opposing hitters. Oh crap, I’m making him sound like a young Jamie Moyer. Let me clarify, he’s MUCH more talented than Jamie Moyer. Now that that’s out of the way, back to your normally scheduled article.

Nola’s fastball routinely sits in the lower 90s. Now that’s usually not anything special, but it certainly is when you can locate it as well as he can. That’s not even his best pitch, either. Nola’s bread and butter is his devastating curveball. Only Corey Kluber, Lance McCullers, and some dude named Clayton Kershaw have had a more effective curveball than Nola’s since he came into the league in 2015.

The overall statistics for Nola this year have been good, but not great. But let’s dive a little deeper into those. Nola has allowed 12 runs combined in his last two starts, which ballooned his ERA from 3.02 to 3.58. Two measly bad starts. That’s all it takes to make your ERA jump over half a run. Before those two bad starts, Nola reeled off 10 straight quality starts. In those 10 starts, his ERA was only 1.71 and he struck out 10.3 batters per nine innings. Pretty good, right?

So, I just took you through the two extremes with Nola this season. Which one are you going to trust more? A 10-start stretch or a two-start stretch? Listen, I’m not saying that 10-start stretch is sustainable over the course of a full season, but it shows just how good he can be. Overall, Nola should settle in as a very solid SP2 long-term.

Remember him? You should. Reyes was and still is one of the most electrifying young pitchers in the game. It’s truly a shame that we didn’t get to watch him pitch this season. Tommy John is a real jerk.

Before the season and his injury, the expectations for Reyes were sky high. He was ranked 6th, 4th, and 1st, respectively, by MLB, Baseball America, and Baseball Prospectus on their preseason prospect rankings. That talent didn’t just magically disappear because he had surgery.

Like I mentioned above, Reyes is an electric talent. His 80-grade fastball sits in the mid to upper 90s consistently and can touch triple digits with regularity. Throw in a hammer curveball and a developing changeup and you have an ace pitcher waiting to happen. Yes, we never know how pitchers will perform after returning from such a long layoff, but Reyes is certainly one you should take a chance on.

Since he still technically qualifies as a prospect, that’s how I’m going to treat him. After seeing Reyes dominate in the majors for the final two months of 2016, there’s not one pitcher in the minors I’d take over him in keeper or dynasty formats. Over 46 innings, Reyes posted a minuscule 1.57 ERA to go along with a 1.22 WHIP and 10.2 K/9. His strikeouts gets even more impressive when you look at his final year and a half in the minors. From the start of 2015 to the time of his call-up in 2016, Reyes’ K/9 was a ridiculous 12.8.

Now, there is a downside to Reyes, and that’s his subpar control. It’s not uncommon for young players to struggle with their control. Actually, it’s almost to be expected. What you look for is whether that control will improve as they mature. That, unfortunately, hasn’t been the case with Reyes so far. It hasn’t gotten worse but has been stuck in the mid-fours since he debuted in the States back in 2013.

That control weakness is the one and only thing holding Reyes back from being a fantasy ace. If you’re looking for the next fantasy pitching stud that is flying a little under the radar, then Reyes is your man. His price will probably never be lower than it is right now.

You have to give props to the Tampa Bay Rays for all the talented pitched they’ve developed over the years. They’ve produced so much pitching that a guy like Faria went relatively unnoticed throughout his long minor league career.  He never had any “wow” seasons but was consistently solid. For the entirety of his minor league tenure, Faria had a 3.13 ERA, 1.13 WHIP, and 9.4 K/9.

Faria didn’t skip a beat after being promoted from Triple-A Durham. Over 13 starts, his numbers are pretty similar to what he did in the minors. Now that he’s in the majors, Faria is finally getting some notoriety.

You could honestly call Faria the Aaron Nola of the American League. His fastball sits around 92 MPH, and he was one plus off-speed offering in his changeup. Faria throws two breaking balls, a curve, and a slider, and while neither are considered plus offerings, he throws them well enough to gets outs when needed.

The development of those breaking balls is going to be key to how high of a ceiling Faria has. You can get by as a decent major league starter with two good pitches, but to be elite you need to have that one solid breaking pitch that you can use to get strikeouts. As it stands right now, Faria looks like a long-term SP3/4, but if he can develop his slider into a plus-pitch, he could end up being an SP2. That alone makes him an enticing option in keeper formats.

Thank you for reading another edition of Dynasty Dugout on Fantrax. I hope you can use this article to your advantage and get a leg up on your fellow league members.  Got a question about a player not covered here? Ask in the comments below or follow me on Twitter @EricCross04 and ask there. See you all next week.