Dynasty Dugout: Prospects to Watch Outside the Top-100 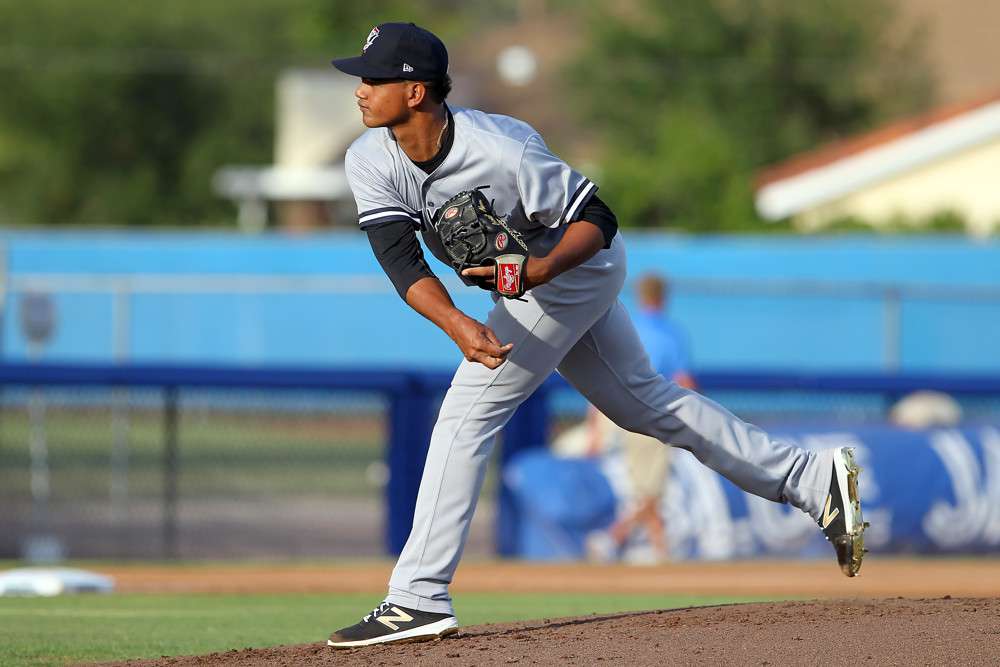 The beauty of minor league prospects is that there’s basically an endless supply of them. I recently finished my five-part top-100 prospects countdown and couldn’t fit in all the prospects I wanted to. Maybe I should’ve done a top-150 or top-200 or something. Oh well, hindsight is 20/20. But since there are many more prospects I couldn’t get to in that top-100, why not write another article with more impact prospects? Sounds like a great idea to me. Prospects are like popcorn, watermelon, or french fries. There’s always room for more. Damn, now I’m hungry. Moms always say to not write prospect articles when you’re hungry. Wait, that’s not right.

Below are 10 additional prospects that didn’t make my top-100 that concluded last week. Each man below has plenty of upside, but also a fair amount of risk along with it. If they continue to develop over the first few months of the season, there’s a strong possibility that you see several of these names in my mid-season top-100 update, sometime around the All-Star break.

If you missed my top-100, or want to go back and check them out again, the links to all five articles are below.

He might have veteran Adrian Gonzalez and rookie Dominic Smith ahead of him at first, but the biggest long-term upside at first in Queens is a hulking Double-A slugger named Peter Alonso. The Mets took the 6-foot-3, 245-pound Alonso in the 2nd round of the 2016 amateur draft, and all he’s done since then is mash. In 462 minor league at-bats, Alonso has walloped 39 doubles and 23 home runs while hitting .297 with a .903 OPS.

He’s slow as bleep and a subpar defender, so first base or DH will be his defensive home throughout his major league career, but he’s certainly got the bat to play those positions. Alonso makes consistently hard contact and doesn’t strike out as much as most sluggers these days do. That bodes well for his future as a .280 hitter with 35+ home runs annually. He’s climbing the Mets system quickly, and all he needs is an opening at first later this season to showcase his plus power.

Royce Lewis isn’t the only good shortstop prospect in the Twins farm system. He might only be in rookie ball, but Wander Javier is wandering his way toward becoming a top-100 prospect. Yes, I know that was bad, but I’m a dad and bad dad jokes are my thing. You’ll get used to it. Through 183 minor league at-bats, Javier is slashing .301/.386/.497/.883 with six home runs and four steals.

An above-average hit tool, plus speed, and a rocket arm are Javier’s calling cards. He’s currently more of a gap hitter, but there’s more power to be had in that bat as he develops, and 25+ home runs annually aren’t out of the question. It’s going to be interesting to see how the Twins handle the shortstop position moving forward with Javier and Royce Lewis. Javier’s arm would play very well at third, too, shifting Miguel Sano to right field or first base.

Do you want power? Well, Brent Rooker has plenty of it. After swatting 23 home runs in 248 at-bats during his final collegiate season, Rooker hit 18 more in his first 228 minor league at-bats. There’s nothing fake or lucky about those home run totals, either. Rooker hits the ball hard with an average exit velocity of 92 mph both at Mississippi State and in the minors last season. His frame and swing are geared for power, so expect plenty of 30+ home run seasons once he gets to the majors, which shouldn’t be too long from now.

While the power is elite, Rooker’s hit tool is merely average due to some swing-and-miss tendencies, especially against off-speed pitches. Still, he should hit .260-.280 in the majors as a middle-of-the-order basher with plenty of upside in home runs, RBI, and runs scored.

Some words used to describe Jose Siri are “toolsy,” “raw,” “upside,” and “risky.” Basically, the definition of a high-risk, high-reward prospect. Siri put up drool-worthy numbers last season at Single-A Dayton, posting a 20/40 season and hitting near .300 to boot. Blazing speed is what gets Siri noticed first. He’s averaged 46 steals per 600 at-bats in his minor league career and has been successful on 76.8% of his attempts.

While not as apparent in games quite yet, Siri’s power is developing and should translate into home run totals in the 20-25 range at the Major League level. When he makes contact, it’s usually hard contact. However, the problem for him is making that contact. Siri’s approach and plate discipline will need some refinement to turn into an All-Star caliber player for the Reds. His current 5.1 BB% and 25.6 K% aren’t going to get it done. If Siri can better his approach and stop chasing pitches outside the zone, the fantasy upside is massive.

If it weren’t for a gruesome knee injury in his Major League debut last June, Fowler wouldn’t even be considered a prospect anymore. Even after the injury, the Athletic thought highly enough of Fowler to acquire him in the Sonny Gray trade last July. It might have been a risk, but it’s easy to see why Oakland coveted him in trade talks.

First, he’s a plus defender in center field, which is always attractive for major league teams. Secondly, he’s got a solid offensive profile to go with it. Fowler possesses plus speed, solid bat-to-ball skills, and developing power. He doesn’t walk much, but he makes consistent contact to all fields, which helps him hit for a high average. Fowler has a chance to start on opening day for the Athletics and put that .280/20/25 upside on display.

You know that old saying, “The apple doesn’t fall far from the tree.” That’s exactly the case in the Cameron household. Seven years after his father retired, Daz Cameron is working his way up the ladder in Detroit’s farm system, showing off an enticing skill set for fantasy purposes. Up until 2017, Cameron was a speed-only player with the rest of his game lagging far behind. Then everything seemed to click in his first full minor league season at Single-A Quad Cities. Cameron whopped 51 extra base hits, including 14 home runs, while hitting .271 with an .815 OPS in 446 at-bats before getting dealt to Detroit in the Justin Verlander trade.

His plus speed will always be his most note-worthy asset and the power is beginning to develop to the point where he should hit 20+ home runs annually to go along with 30+ steals. The problem will be the batting average, as his hit tool is below average with plenty of holes in his swing.

It might seem a little odd to mention a player that has yet to homer in 689 professional at-bats here. However, the speed Christian Pache possesses is truly elite and could be a fantasy difference-maker down the road. He just ran the Boston marathon in the time it took you to read the last two sentences. He’s that fast. The lowest I’ve seen Pache’s speed graded is a 70, and Baseball America graded it as an 80 this year. He’s still learning how to harness that speed for the greater good, demonstrated by his 69.3 success rate. Once he becomes smarter at reading pitcher’s moves, Pache should have no problem stealing racking up 50+ steal seasons.

It still remains to be seen if Pache develops into a dynamite leadoff hitter or more of a bottom-of-the-order speedster like Jarrod Dyson. The development of his currently average hit tool will decide that. Regardless, a .260 average with 40+ steals still has plenty of value. There’s even hope that he grows into double-digit power, too. Let’s hope so. Anything is better than zero.

Faedo has yet to throw a professional pitch after sliding down to the Tigers at pick 18 last June. Detroit wanted to play it overly safe with their first-round pick after he needed knee surgery the previous fall. Now more than 18 months removed from the surgery, Faedo should make his much-anticipated debut in April, and it might not take long for him to make it to Detroit.

Faedo has a dynamic three-pitch arsenal headlined by a low to mid-90s fastball that he can put some cut and sink on and a low-80s slider with solid two-plane break. While his change-up isn’t as good as these two offerings, it has flashed plus potential and should be an average pitch for him at the very least. The Tigers have several good pitching prospects in their system, and Faedo might end up being the best of them all.

Sometimes you just have to look at performance instead of upside or a pitcher’s “stuff.” Burnes doesn’t blow anyone away with his arsenal, but he commands his pitches well and knows how to attack hitters and keep them off balance. Burnes has a four-pitch arsenal with three of the pitches graded as above average, though none of his offerings are considered plus. His fastball sits in the low 90s with natural cutting action that he can locate very well on both sides of the plate.

A 77-80 mph curveball is Burnes’ best off-speed pitch and has a good downward break to it. He also throws a slider that has shown potential but has a tendency to flatten out at times. His change-up also shows promise at being a weapon for him with splitter-like action on it. If Burnes can continue to command his arsenal well, he has SP2/3 upside, even without one dominant pitch.

Chance Adams and Justus Sheffield might be the top two arms in the Yankees’ farm system, but Albert Abreu is right on their heels. The 2013 international signee pairs a mid-90s fastball with two potential plus off-speed pitches. His power curveball has a strong two-plane break and can look like a slider at times. Regardless, it generates plenty of whiffs for Abreu when he’s throwing it well. He also features a fading change-up that flashes plus-potential and should be at least an average offering for him.  Abreu is still raw and has a ways to go before reaching the majors, but he possesses SP2 upside if he can continue to develop his off-speed pitches and refine his control.

Thank you for reading another edition of Dynasty Dugout here on Fantrax. I hope you can use this article to your advantage and get a leg up on your fellow league members.  Got a question that I didn’t cover here? Follow me on Twitter @EricCross04 and ask there.