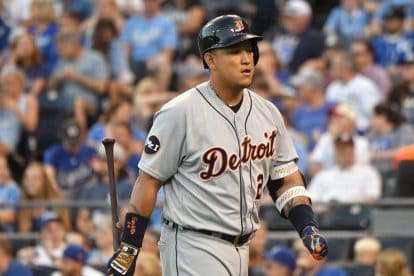 Wait, the fantasy baseball season is coming to an end? No, it can’t be! It just started! Unfortunately, baseball season doesn’t last all year, and the off-season has to happen sometime. The 2017 season was one heck of a ride. Aaron Judge broke the rookie home run mark, Miguel Cabrera had his worst season, and Giancarlo Stanton still has a chance to be the first player to hit 60 home runs in a season since Sammy Sosa and Barry Bonds both did so in 2001.

This offseason might not be as eventful as the loaded 2018 offseason is expected to be with all the stud free agents, but it’s still chock full of things to monitor before draft season rolls around next spring. The Arizona Fall League, which I discussed last week, will kick off the offseason with free agency and trades to follow. Here are some key things to keep an eye on over the next few months.

After a rough 2016 season, Michael Conforto was having a career year before injuring his non-throwing shoulder which required season-ending surgery. Through 373 at-bats, Conforto hit .279 with 27 home runs, 68 RBI, 72 runs, and a .939 OPS. He was blossoming into one of the 10 best fantasy outfielders, but as was status quo for 2017, that injury derailed a very productive season.

"I know I'll be back and swinging the same way." @mconforto8 talks to the media for the first time since his surgery. #Mets pic.twitter.com/L5Z3ByChJc

When the injury first happened, there was a lot of uncertainty on how long of a recovery it would be for Conforto. And the prognosis seemed to worsen with each passing day to the point where his entire 2018 season was in doubt. Now the picture is becoming clearer. Conforto recently mentioned to MLB.com that he expects to make a full recovery, but the timeline remains murky.

“I know I’ll be back, and I’ll be swinging the same way,” Conforto said. He then added, “The doctors have told me I’m gonna make a full recovery, and I’ll be back. It’s just the timeline, we don’t know exactly when.” This is definitely a situation to keep an eye on over the winter and into the spring.

There’s no doubting that Miguel Cabrera is one of the best hitters we’ve seen in the last two decades. However, this just wasn’t his year for a wide array of reasons. After batting over .300 for each of the last eight seasons, Cabrera finds himself sitting at a pedestrian .249 with only 16 home runs. This certainly isn’t the Miggy we’ve come to know and love.

The biggest hindrance this season, and also the biggest cause for concern moving forward, is his troublesome back. Back injuries are arguably the worst to have as a hitter (or any baseball player, for that matter). Every swing puts so much torque on the back that a significant back injury, like Miggy has, is definitely a major concern. On Sunday, he was diagnosed with herniated disks in his back. According to manager Brad Ausmus, Cabrera is unlikely to undergo surgery and will rather opt for rest and anti-inflammatories. Keep an eye on his recovery this offseason before drafting him next spring.

Coming into the 2017 season, Victor Robles was one of the top prospects in baseball. His final stat line might not have been as good as expected, but he still had a good enough season for the Nationals to give him a cup of coffee this September. He’s gotten only in 17 at-bats since his call-up, but it’s obvious he has nothing left to prove in the minors. However, it remains to be seen if there will be a spot for him in the Nationals’ outfield when the 2018 season begins.

Right and center field are occupied by Bryce Harper and Adam Eaton, respectively. That leaves left field as the only option for Robles to break into the Washington lineup on a full-time basis. Luckily for him, Jayson Werth is a free agent this winter, and the starting left field job is currently wide open and begging for Robles to take it.

The only thing that brings hesitation is the fact that Dusty Baker seems to hate rookies for some odd reason. Don’t put it past Washington to add a low-cost free agent to play left field, but assuming he shows well in the Arizona Fall League, Robles should be in the opening day lineup in 2018.

The Braves Plans for Ronald Acuna

Okay, Ronald Acuna, we get it, you’re REALLY good at this baseball thing. I’m sure your parent club has noticed that too. A lot of us were hoping that the Braves would call Acuna up this September, but ultimately that didn’t end up happening. Now we’ll have to wait for 2018 to see Acuna wreak havoc on the National League. The only question remaining is when he’ll get that chance.

It’s obvious he’s ready for the major leagues, but let’s not forget he won’t turn 20 for two more months and has accrued only 442 at-bats above Single-A. The Braves really have no reason to rush their prized prospect and could keep him down a little longer in 2018 for service time reasons. A productive spring training could make the Braves’ decision difficult, but I’d expect Acuna to get another 100-200 at-bats in the minors before getting the call sometime in May. Monitor this situation closely.

There’s never been a player with more hype coming out of Asia. Yes, Ichiro has been an incredible hitter for the last 17 years, but the hype wasn’t as big with him as it is with Shohei Otani. A lot of players try to be two-way players but ultimately settle in as a hitter or a pitcher. It’s difficult to become an asset both at the plate and on the mound, but Otani is talented enough to make it happen. He possesses dominant stuff on the mound and elite raw power at the dish. The overall potential here is unlike anything we’ve ever seen from a foreign import player. The bidding war for his services is going to be one of the biggest storylines this winter.

Prospects that Could Make a Big Jump

I’m probably one of the biggest suckers for the potential of Cuban imports, especially the hitters. The latest one that I’ve attached myself to is Luis Robert. This kid flat out oozes potential. So much, in fact, that I believe he’s going to be the Yoan Moncada of the outfield. He has the potential to hit for a high average, slug 25+ home runs and steal 30+ bases.

He’s already given us a small glimpse of that potential during his first season in the minors. Through 84 rookie league at-bats, Robert hit .310 with three home runs and 12 stolen bases on 15 attempts. To top it off, he has an advanced approach at the plate. He drew 22 walks compared to 23 strikeouts, which helped him have an incredibly high .491 OBP. I know it’s a small sample size, but a 1.027 OPS is certainly encouraging and shows just how special of a talent Robert is. It’s not a matter of if he’ll become a top-10 prospect, it’s a matter of when.

Is it just me or is every other prospect you see a second-generation talent nowadays? While his dad had a solid major league career, Fernando Tatis Jr. has the chance to be much better. Through 486 at-bats in single and Double-A, he slashed .278/.379/.498 with 22 home runs and 32 steals. His ability to draw a walk (77 in 2017) is incredibly advanced for a player that isn’t even 19 years old yet. Tatis is a remarkable all-around talent that should be manning the wide open shortstop position in San Diego with the next couple of seasons.

There are a lot of good prospects in this Atlanta farm system, and Luiz Gohara is proving that he could end up being one of the best of them. He’s a big 6-foot-3 hard-throwing left-hander that has continued to improve at each level. Gohara registered a 2.62 ERA, 1.21 WHIP, and 10.7 K/9 over 25 starts and one relief appearance this season in the minors. That strong showing earned him some starts with the Braves down the stretch this season and all but locked-up his rotation spot in 2018. Gohara has No. 2 starter potential and maybe even No. 1 if he can improve his control. He just recently started cracking top-100 industry lists but could find himself in the top-25 early next season.

Regardless of whether it’s in the rotation or the bullpen, there’s a good chance Michael Baez has a bright future ahead of him. Over 11 starts, Baez dominated to the tune of a 2.54 ERA and 12.6 K/9. He’s an imposing force on the mound with an electric high-90s heater and a developing slider that should become a plus offering for him. His changeup is lagging behind but should become at least an average pitch for Baez. He’s an imposing force on the hill too at 6-foot-8 and 220 pounds. How he responds to advanced competition in the high minors next season could help determine if his future is as a starter or reliever. If he continues to dominate, expect Baez’s name to shoot up into the top 25-50 prospect discussion.

Thank you for reading another edition of Dynasty Dugout on Fantrax. I hope you can use this article to your advantage and get a leg up on your fellow league members.  Got a question about a player not covered here? Ask in the comments below or follow me on Twitter @EricCross04 and ask there. This will be the last Dynasty Dugout article for several weeks, but I’ll be making periodical check-ins throughout the off-season to recap all free agent signings and trades. Until then, enjoy the playoffs!