Everyone Needs To Calm Down About Dustin May 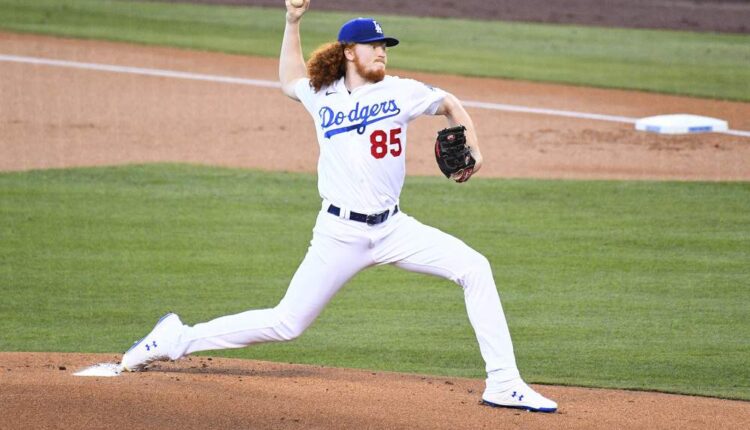 Show of hands, who hasn’t been amazed or bewildered by a Dustin May offering this season? I’m not seeing any hands going up. Thanks to the Pitching Ninja and others on social media, the legend of Dustin May is growing at nearly unhealthy levels. It’s not hard to see why when May uncorks a 99 mph 2-seamer or 87 mph curveball that take off in completely different directions. Trust me, I enjoy watching these pitches as much as the next baseball fan, but I’m not here to gush about May’s insane movement. No, I’m here to douse May’s soaring fantasy stock with a bit of cold water. I’m fully aware that not everyone will agree with this, and I can already hear the uproar from my Five-Tool Podcast co-host Jake Devereaux, but it needs to be done.

Also, make sure to check out the Five Tool Fantasy Baseball Podcast weekly for more dynasty, prospect, and redraft talk.

Sell-High on Dustin May?

Let me start out with a few reminders as I already know some of the responses I’ll get on social media.

Okay, that should just about cover it.

The latest dose of May filth has pushed his buzz to an all-time high. I’ve even seen him dubbed the next Jacob deGrom on Twitter. Let’s all calm down for a second. Could May wind up as a very good pitcher for a very long time? Absolutely. Is it a certainty? Absolutely not. Throwing pure filth doesn’t 100% translate into real-life superstardom or even fantasy superstardom. And that’s what everyone that rosters May in dynasty leagues is hoping for right? Fantasy superstardom?

That’s the part that I’m having a problem with. As I mentioned above, I fully believe that May can be a very good pitcher in this league and a great #2 starter behind Walker Buehler moving forward. But is he a fantasy ace?

What Makes a Fantasy Ace?

We must first ask ourselves, “what makes a fantasy ace?” For me, it boils down to three main details:

The strikeouts part can be broken down into volume strikeouts and rate strikeouts. Most standard 5×5 category leagues use strikeouts as a category, while a smaller percentage use K/9. With the number of starters tossing 200-plus innings dwindling with each passing season, more of an emphasis has been put on strikeout rate instead of relying on the volume totals.

That’s where Mr. May falls a bit short. Again, there’s nothing necessarily wrong with May’s strikeout rate, but it just doesn’t stack up to the fellows we were drafting as out fantasy SP1 this season.

Why The Lower Strikeout Rate?

When I say “lower” strikeout rate, please don’t take that out of context. I’m not saying Dustin May is Ivan Nova or Wade LeBlanc or anything. A strikeout rate above 20% and K/9 above 8-8.5 is still very solid. But when compared to the fantasy aces above and what May supporters envision him to be longterm, it’s a tad low in those regards.

With the filthy stuff that May attacks hitters with and his ability to get ahead in the count, you’d figure his strikeout rate would be much higher. But that just goes to show that you can have nasty stuff but not put away or big swing and miss stuff.

To take it one step further, May’s 27.9% CSW is about as average and middling as a statistic can be, ranking 70th of 138 pitchers with 150-plus pitches throw this season.

The answer to the above is also a segway into the next section of this article. While May’s arsenal is nasty, that doesn’t always correlate to a higher strikeout rate, especially with May’s pitch usages.

That asterisk is there for a reason. Why? Well, it’s a pitch by pitch basis. Which two offerings does Dustin May get his filthy movement on?

In each of his abbreviated seasons in the Major Leagues, May has thrown his two-seamer (sinker) a hair over 50% of the time. No matter how nasty a two-seamer is, it’s simply not a big swing and miss offering. You can see that above with May’s 13.1% whiff rate in 2019 and 12.7% this season. Those bad video game swing videos you see on Twitter are the exception, not what should be expected on a consistent basis. Sure, we all ogle May and laugh at Manny Machado when May makes him look like a little leaguer instead of someone making $32 million in each of the next eight seasons, but these are rare occurrences. If you only look at Twitter for baseball videos, you’ll probably disagree with that last sentence, but it’s the truth.

In reality, the big swing and miss offerings are breaking pitches (curveball/slider) and offspeed pitches (changeup/splitter) with more emphasis on the first group. May has thrown his curveball around 10.5% of the time in the Majors so far and you have a better chance at hitting the lotto than seeing him throw a changeup (one in 2020, seven in career).

While the metrics above might not make you believe this, but May’s curveball is a borderline plus offering. I hate to pick on Machado again (wait, I actually love it), but May made him look foolish on a curveball as well. According to Brooks Baseball, May’s curveball averages 6-7 inches of horizontal movement. Pair that with an average of 10-11 inches of horizontal movement and you’re approaching a 16 to 18-inch difference. Hot damn! For reference, home plate is 17 inches wide. He’s still very young and if May were to up that curveball usage a bit or even add a reliable changeup, we could see that strikeout rate tick up closer to what we see from the 2020 fantasy SP1s in the chart above.

Rob Friedman, the infamous Pitching Ninja, posted an overlay video of these two offerings to Machado on Twitter yesterday to show the huge difference in the horizontal break between the two. Here are a few of the replies I received when I retweeted that video.

“That’s just unfair. You could give me one million swings and I couldn’t square it up.”

Very true, neither could I.

Now we’re getting somewhere! I know, I know, easier said than done. I’m sitting here at my desk in Maine writing this and couldn’t even imagine having to face stuff like this. I’m pretty sure I never faced higher than 85ish mph playing baseball in high school and that was probably pretty straight too. But here’s the thing. The hitters May is facing are the best hitters to walk the earth. Great hitters with a keen batting eye can pick up spin and lay off when May’s two-seamer or curveball dart outside the zone.

Sure, you’ll absolutely continue to see some highlight reel videos on Twitter of May taking the opposing hitter over his knee and spanking him until his bum is bright red, but this type of arsenal isn’t conducive to a strikeout rate we’ve come accustomed to seeing with our fantasy aces.

I’m going to stress one more time that I’m a fan of Dustin May. How can you like baseball and not be? Well, unless you’re a San Francisco Giants fan and despise the Dodgers with every ounce of your being. I’m not saying that there’s zero chance May can increase his strikeout rate and ascend into the fantasy SP1 conversation. He’s still very young and extremely talented, after all. But I am saying that I don’t currently see it with this pitch mix.

I’m pretty confident that with May’s stuff, command, and control, that he’ll be able to maintain low ratios annually, and there’s no reason not to think he can be a fairly durable arm as well. But without the higher strikeout rate, he projects more as an SP2 for fantasy purposes moving forward, which is still a very good outcome. So for now, I’d try to capitalize on this enormous buzz and sell-high if you can. But only do so if you get a great offer, because as I mentioned, May is still likely to be a very good pitcher in this league and for fantasy.