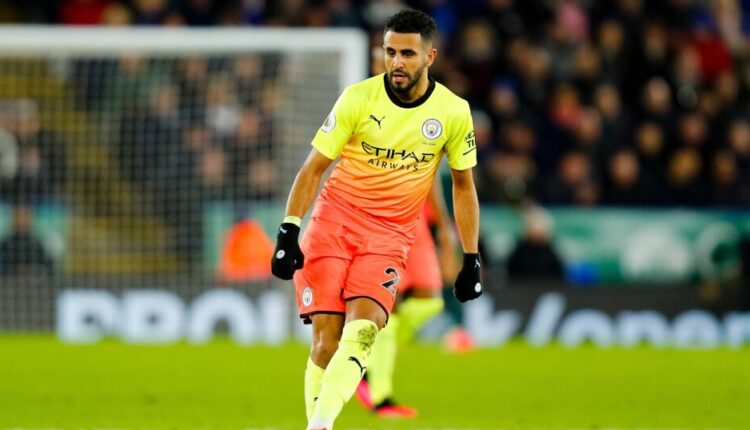 So here’s how this one came about. Sat in the FC Ladelaide boardroom (aka the sofa in my living room), I was locked in trade negotiations with the manager of My Name Jeff. Over text message, of course – there was no breaking of Boris’ lockdown.

Anyway, after a few back and forths, I threw out Armstrong and Podence (FC Ladelaide’s under-the-radar gems) for Mahrez (My Name Jeff’s big but underperforming star). I did so at a whim, expecting a counteroffer more than a consideration. A consideration is what I got though. And as many of you traders can probably attest to, when a positive response comes back to what was meant as a moon-shot offer, you frantically start to question yourself. Is something the matter with Mahrez? Am I undervaluing Armstrong and Podence? What am I missing?! I took a closer look at Mahrez, and I found what I am calling ‘The Single Game Skew’.

The Single Game Skew is the monster performance. The James Harden 60-point triple-double. The Dustin Johnson 20 under par at the Masters. The Brian Lara 400 not out. The Nick Foles 406-yard, 7 touchdown perfect game. Yes, that’s right, I’m putting Nick Foles’ name with those sporting greats. It is, of course, generally a very good thing (unless you are on the receiving end). It almost always single-handedly wins a Fantrax matchup. But one pesky side-effect is that it tends to skew the numbers a bit.

Now, as my millions of readers will no doubt know, the numbers guide my fantasy management. I wouldn’t say they are the sole driver of the FC Ladelaide car, but they are definitely in charge of the map. Or satnav, for you youngsters. The numbers for Mahrez look good on the surface (15.27 PP90) but that 49.5 point haul against Burnley had nestled in my brain; planted like a regrettable idea by Dominick Cobb. You wouldn’t call it a one-off exactly – we’ve seen Mahrez put teams to the sword before (he had a 36 pointer and a 37 pointer last season). But without it, those remaining scores certainly had me questioning things. So I did what any logical person would do. I downloaded some .csv files and spent half a dozen hours compiling and analyzing data. The outcome of which is this article.

Below are two tables – one for forwards and one for midfielders – ranked in order of discrepancy between PP90 and PP90 minus single game skew (SGS). In each case, only players who had played in at least 10 games and who had greater than 66% ownership at the time of writing were included. Whilst, naturally, the players who have yet to have a monster game tend to sit towards the bottom of these tables, it still makes for some interesting reading… 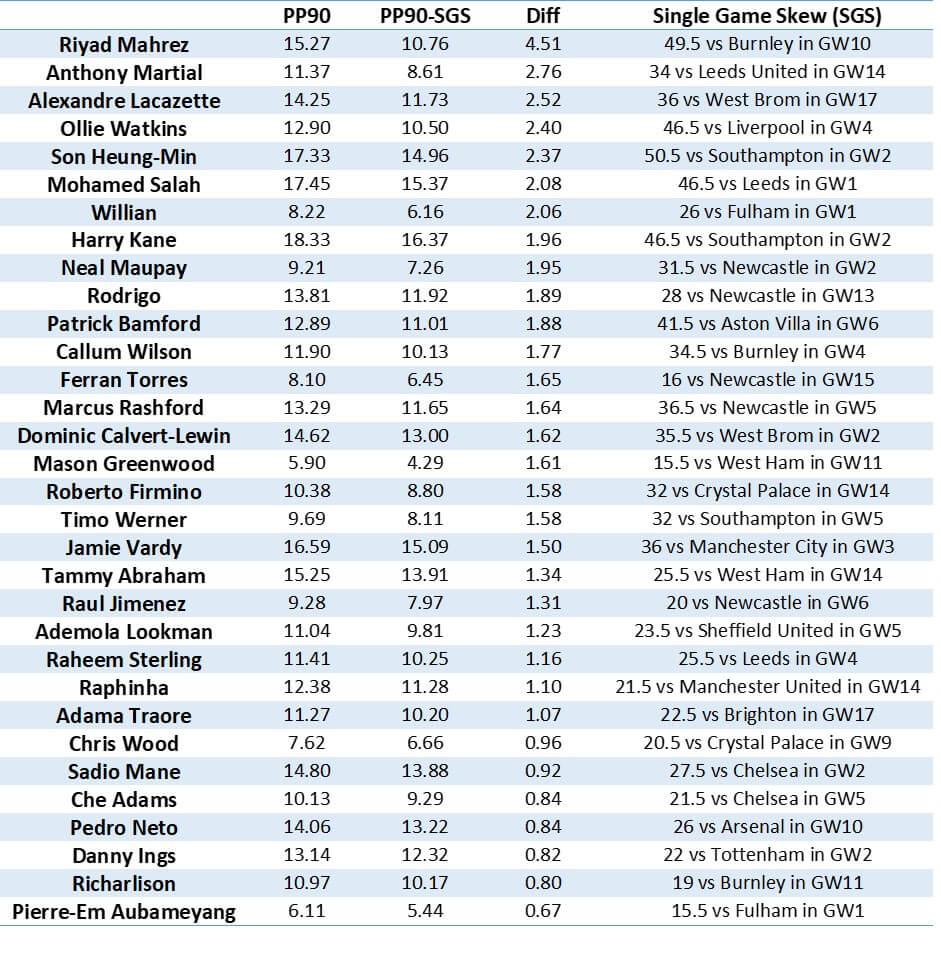 The top four names here are the interesting ones, after which you have your superstars (Son, Salah, Kane) and your duds (Willian, Maupay) – neither of which necessitate more than a passing thought. But Mahrez, Martial, Lacazette, and Watkins…these guys scream red flags for me. Remove their Single Game Skews and they go from A-listers to B-listers, much like the Bourne franchise did between Ultimatum and Legacy. It changes the complexion of a trade when you consider that Mahrez’s PP90 is pretty much on par with Podence’s once you remove that Burnley game from the equation…add Armstrong into the mix and My Name Jeff would have been getting away with murder. The counter-argument, of course, is that Podence and Armstrong are not capable of the monster games with which Mahrez and few others are. But is one monster game in nine (and counting) enough?

At the opposite end of the Single Game Skew table we have Auba and co. It’s been downhill since GW1 for the Arsenal captain, and many will be questioning how much lower that hill can go, but on the plus side, at least he’s been completely transparent in his inadequacies – there’s no big score obscuring his fantasy value here. This time the names of note are Richarlison, Ings, Neto, and Mane. Richarlison, in particular, has a PP90 of 10.97, despite a high score of just 19. Last season he scored 20 or more seven times, so the chances are he will break his 20-duck sooner rather than later. Neto and Mane have the 7th and 9th highest floors, respectively, according to DrafterThoughts, and whilst any owners will demand a steep price for either, a lot of data suggest that this would still probably be undervaluing them. 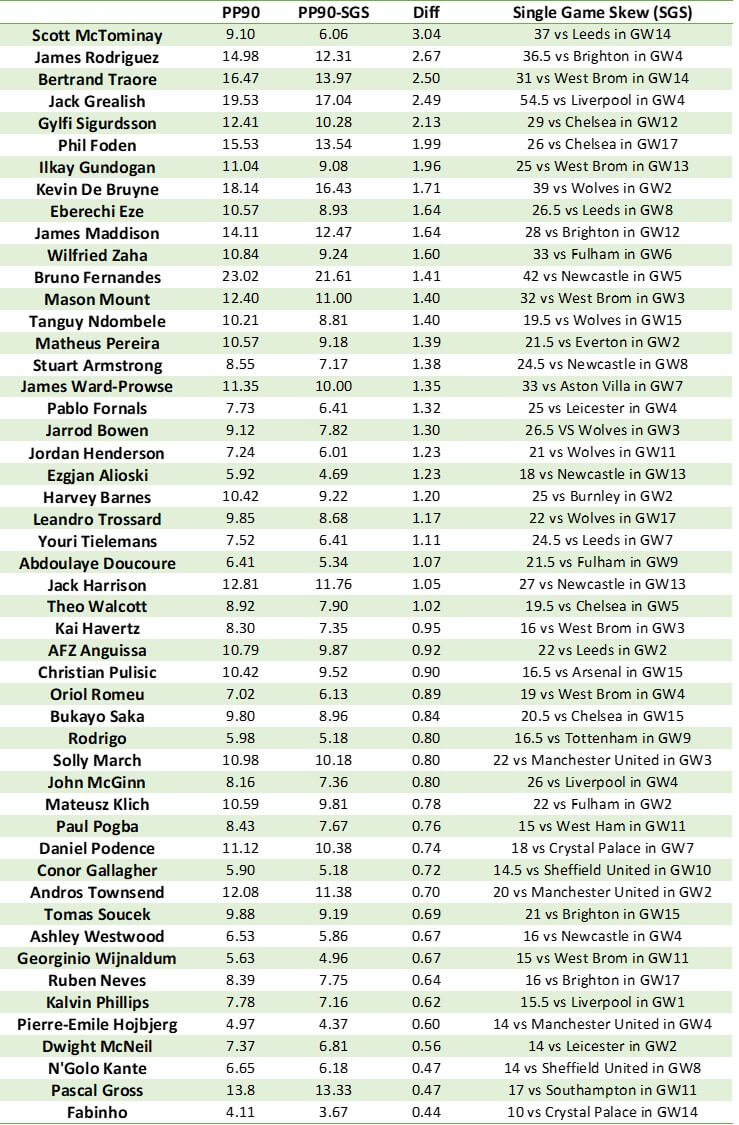 This time the name atop the list is not as relevant. Yes, McTominay has his supporters, but those tend to be the deluded ‘Ole’s at the wheel’ United fans who actually think their club can win the title this season. J-Rod may have been channelling his inner-Wilshere for the past month, but he remains a big name and despite the 2nd biggest difference, the PP90-SGS is still impressively high. Traore and Grealish benefit from being set-piece takers on a very attacking Villa team, and so despite each having a big return pulling up their PP90, their PP90-SGS also remains excellent. The same can be said for KDB.

Where the numbers may hold some insight is for the likes of Sigurdsson, Gundogan, and Eze. Here we have three players whose popularity seems to be high in the fantasy community right now but should carry with them a little asterisk for owners and suitors. Without the 29-pointer against Chelsea, Everton’s Icelandic midfielder sees his PP90 drop to 10.28 – decent (the average for a midfielder is 8.19) but not exactly special. Likewise, Gundogan and Eze see theirs drop from double-digits to single-digits – something that probably plays a big role psychologically when it comes to trade negotiations.

Again, a quick look at those with the smallest differences between PP90 and PP90-SGS not surprisingly finds players who have yet to have a “big game”. Indeed, it’s not until Soucek, 12th from the bottom, that we have someone with a 20+ pointer. In addition, whilst all of these are highly owned players, it is only Pascal Gross who sits in the lower reaches with a respectable PP90 or PP90-SGS. The Brighton midfielder has been extraordinarily consistent when starting, having returns of 14, 14, 15, 16, 17, 10, and 8 this season. Townsend and my man Podence are two other notable players who are minimally affected by their ‘big game’.

What does this mean?

No, I didn’t write this article purely to help justify the stupid amount of time I spent researching a potential trade…that was just part of the reason. By and large, the names and numbers here provide interesting but superficial reading. The most noteworthy thing about Ward-Prowse’s, for instance, is not that his PP90 drops by 1.35, but that his 33-pointer is one of the biggest scores of the season and came against a Villa side with the 3rd best PP90 Against for midfielders. Similarly, there are five instances of Single Game Skews against Wolves, a team who are notoriously strong defensively and also have a decent (10th best) PP90 Against. But where it should provide some use to the fantasy football manager is with the names towards the top of each table. These are players whose shine should be inspected, as their value is not as high as it first appears. In particular, the owners of Mahrez, Martial, Lacazette Watkins, Sigurdsson, Gundogan, and Eze may want to cash in now, before that Single Game Skew gets diluted further, and their PP90 drops down to their true value.