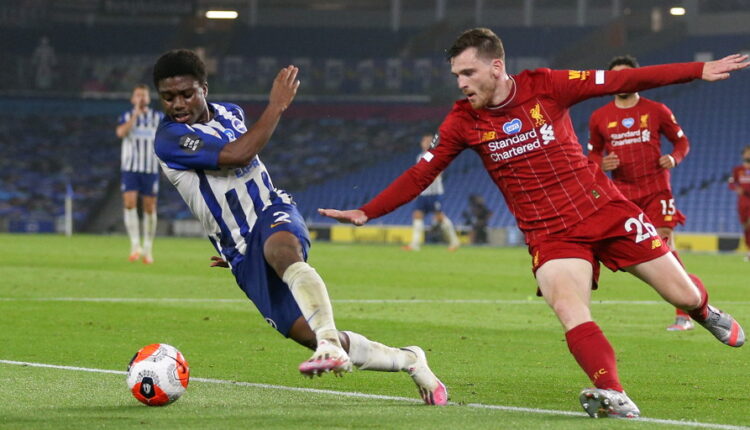 Getting your team selection correct in Draft Premier League is just as essential as your pre-season draft or your weekly waiver wire claims. And that’s exactly why we’re here to help with our Gameweek 7 Start and Sit article! We’re here to talk you through some of the big Fantasy EPL decisions you may need to make for the upcoming fixtures.

Leeds have conceded the 2nd most goals in the league so far this season, yet Cooper has managed to score 7 points per start during that time. That’s largely due to his proclivity for acquiring peripheral stats including Aerials, Tackles, Interceptions, and Clearances, all vital parts of the Fantrax game. Well this week, Leeds faces a friendly matchup vs Watford and boasts a 37% chance of keeping a clean sheet according to the oddsmakers. That adds up to a nice recipe for success for Cooper to score a double-digit haul this gameweek.

Matt Lowton vs NOR

Robertson is a great player, but Man City is the toughest offense to play against as a fantasy defender hands-down. They’ve allowed the least fantasy points against them by defenders by far, and have consistently stifled opposing studs. Take Marcos Alonso for example; the Spaniard played City last week, having averaged more than 20 points per game, and scored an atrocious -1.25 points against them (in only a 0-1 loss). Expect a similarly disappointing performance from Robertson.

The diminutive Englishman showed just why Leicester City decided to invest in him during the off-season, scoring 15 fantasy points without an attacking return, and generally looking like the spark that Brendan Rodgers’s side has been lacking so far this season. This week, Lookman faces an easy matchup vs Crystal Palace and is favored to score a goal or assist nearly 40% of the time. Even without that, he provides one of the best floors for a Fantrax midfielder outside of the highly-owned and well known-studs

This one’s a rather big call, benching the big-name United winger. Yes, Sancho has upside this week and a possibility of finally getting an attacking return vs Everton. But the downside is also very real. Sancho has looked genuinely unimpressive in every game he’s started this season including the midweek UCL game where he was substituted early once again. He’s averaging less than 4 points per 90 minutes this season and is by no means a guarantee to get 90 minutes given a start either. The downside risk is far too high, and I’d much prefer a punt on a waiver wire pickup or one of the options mentioned above.

In Patrick Bamford’s injury absence, Rodrigo has taken up the Leeds starting striker role. While he didn’t excel last week vs West Ham, this week’s matchup vs Watford is much more favorable. Leeds likes to constantly be attacking and should generate plenty of offense. The oddsmakers give Rodrigo a 35% chance of scoring this week. You likely won’t find a better week to start the Leeds forward.

Chris Wood vs NOR

Another Liverpool player features and this time it’s the Portuguese, in-form forward. Jota scored 18.5 just last week but there are many reasons to bench him this week vs City. Firstly, he’s a rotation risk in the last game of the gameweek due to Firmino being back healthy and firing. Firmino subbed on for Jota in the midweek UCL game and scored 2 goals off the bench. Don’t be surprised if Jurgen Klopp starts the veteran Brazilian over Jota. On top of that, City are a difficult matchup for any attacker, particularly those who are dependent on goals and assists for most of their fantasy points. Well, Jota fits that description well, so without an attacking return this weekend, you may be looking at a serious risk to your lineup.