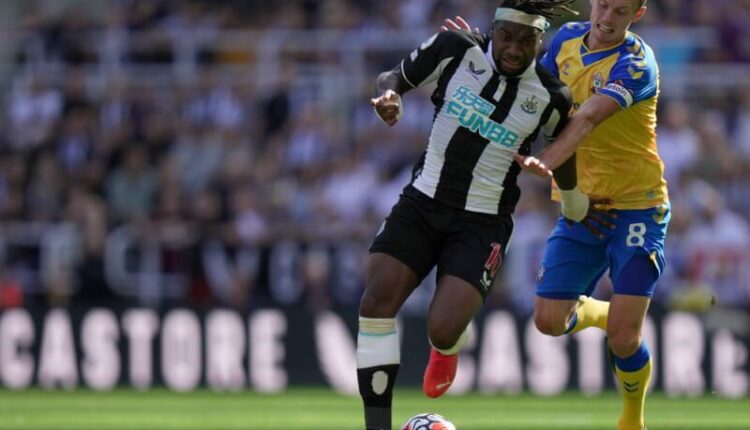 Getting your team selection correct in Draft Premier League is just as essential as your pre-season draft or your weekly waiver wire claims. And that’s exactly why we’re here to help with our Gameweek 35 Start and Sit article! We’re here to help you with some of the big Fantasy EPL decisions you may need to make for the upcoming fixtures. 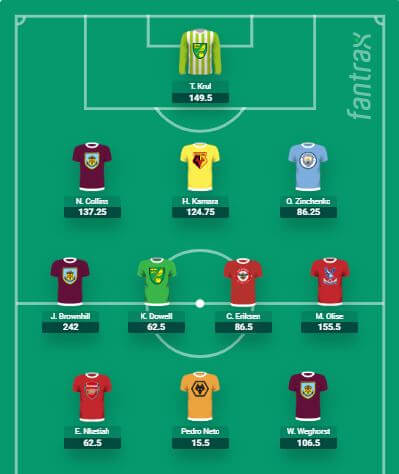 Gameweek 35 finally brings us an entirely single game week. No team plays more than once and hence we finally have some pure starters to pick. No cheating by taking generally poor fantasy players from teams with 2 games! With that said, we will of course be targeting under-rostered players in favorable matchups or on hot streaks. From the former group, we have 3 Burnley players who get a bottom-of-the-table matchup vs Watford. Nathan Collins and Burnley have an unusually high chance at a clean sheet (29%), Josh Brownhill got 12 ghost points against the tougher Wolves last weekend and should continue to thrive on more peripheral stats, and Wout Weghorst has a 33% chance to score vs Watford, abnormally high for him. Rounding out the defense, we have Hassane Kamara from the opposite side of the same matchup and 25% likely to keep a clean sheet (and far more to accrue many ghost points vs Burnley), and Zinchenko, who is always a great option when he starts and is likely to again this week with Kyle Walker and other City defenders still out injured.

In midfield we have the red-hot Eriksen, who has over 10 points in his last 5 straight starts, including only 3 attacking returns, as well as the lukewarm Kieran Dowell who has become a solid points-getter for Norwich and faces the mediocre Villa this week (and also a nice attacking DGW of Leicester and West Ham in GW36). Finally, we have Michael Olise, who’s under-rostered some time out of the Palace XI, but someone who should come back in and faces a suspect Southampton defense, good for 18% assist odds and 13% goal odds. Next to Weghorst up top we have the in-form, and in Arsenal’s starting lineup, Edward Nketiah, who is 35% to score vs West Ham, who are significantly banged up at the back, and may even rest many of their starters for a crucial Europa League midweek game. Finally, we have Pedro Neto, who many managers have been patiently waiting for to get back into the Wolves XI. This week should finally be the week after multiple injuries to other Wolves attackers and poor performances in a 1-0 loss to Burnley in GW34. Neto will be involved in set pieces, is 20% to assist, 18% to score, and should rack up set pieces from key passes and dribbles vs Brighton. 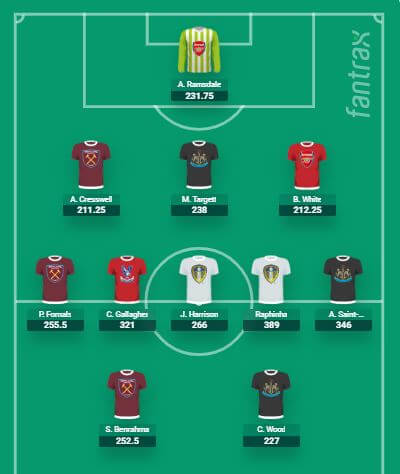 Our sits XI begins with a Newcastle bench stack. We don’t suggest starting any Newcastle players vs Liverpool but thought it important to still call out 3 of their most highly rostered and often started players in Matt Targett, Allan Saint-Maximin, and Chris Wood. Newcastle has been in good form, and so have these players but Liverpool has a 41% of a clean sheet and Newcastle has a 10%. ASM should still do some ghost point damage due to his style of play, but with little to no upside, you can find better options. In a similar vein are the 2, generally quality Leeds mids, Raphinha and Jack Harrison. The latter has been one of the most improved midfielders during the 2nd half of this season and the former has maintained a solid floor, but City offers little upside for either, and thus we think this is a great week to bench them.

In defense, we additionally have Aaron Cresswell who faces the inconsistent, yet threatening Arsenal side, likely alongside multiple backup to the backup defenders for West Ham. Ben White is an over-rostered center-back who just doesn’t offer enough when he doesn’t get a clean sheet. 25% of getting one this week isn’t enough for us to consider starting him. Cresswell’s teammates Pablo Fornals and Said Benrahma join him on our bench facing Arsenal, likely with their starting front-man, Michail Antonio rested and not able to finish their chances. Finally, we round out or side with the biggest faller 2nd half of the season in comparison to 1st, Connor Gallagher. Recently, Gallagher has turned into a Hojbjerg regen, putting up 6, 0, 1.5, 3, 3.5, 8.5, 3.5 in his last 7 starts. Yes, he faces Southampton but those numbers scream bench, and perhaps dropping altogether (unless you want to hold out until after Palaces DGW37). Now be ruthless, and make that home stretch count and chase glory!

NFL Draft: Round One Awards for 2022 Fantasy Football