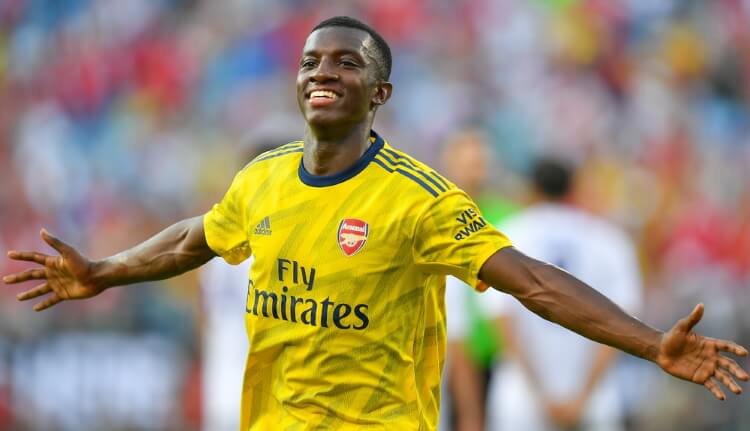 Getting your team selection correct in Draft Premier League is just as essential as your pre-season draft or your weekly waiver wire claims. And that’s exactly why we’re here to help with our Gameweek 34 Start and Sit article! We’re here to help you with some of the big Fantasy EPL decisions you may need to make for the upcoming fixtures. 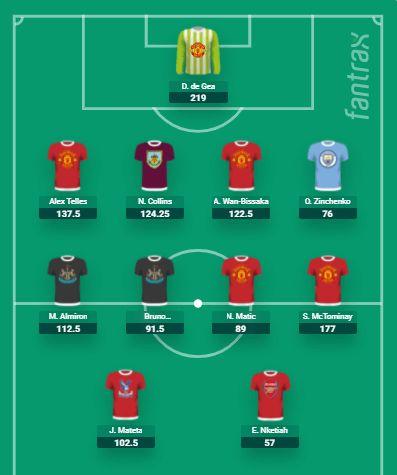 Gameweek 34 brings us a mini-DGW only for Chelsea and Manchester United. United have 2 tough matchups in Arsenal away and Chelsea at home but we still think they have plenty of start-able players. Despite scoring only 3.5 total points over his last 6 starts, we’re backing De Gea in net, as we think he’ll get plenty of saves across his 2 matchups. On top of that, despite conceding 4 goals to Liverpool last week, we’re opting to start United’s wide-backs, Alex Telles and Aaron Wan-Bissaka. If either starts their first game, we think they should be in your lineup as their upside potential of starting 2 games still outweighs the downside of United conceding multiple goals in both games. Next to them, we have the now-nailed, Nathan Collins, who acts as a Tarkowski Jr. in Ben Mee’s absence. He’s under-rostered still but remains a sneaky pick for the rest of the season. Speaking of sneaky; due to a number of injuries to City’s preferred backline, Zinchenko looks fairly likely to start this week for City, in a very nice matchup vs Watford at home. If he starts, he could be our pick of the week.

In midfield, we have more United picks in Matic and McTominay. These 2 we wouldn’t normally trust in an SGW, nor to start 2 in a DGW, but the circumstances are just right at the moment. Pogba got injured last game as is likely out the next 2 games. Fred is likely in a similar situation as he has not returned to training yet. Finally, after not playing 2 semi-defensive minded mids last game vs Liverpool and getting shredded, Rangnick likely won’t make that same mistake again. These 2 should start both games by default, as long as their fit. Next to them, we have 2 recent Newcastle goalscorers: Almiron and Guimaraes. Almiron has admirably filled in for Ryan Fraser in his injury absence and looks likely to continue. Bruno Guimaeres is hot as can be, scoring 21.5 and 31 in the last 2 weeks. Not to mention, Newcastle gets Norwich this week!

Up top, we have the recently benched Mateta and the recently started Nketiah. The Arsenal striker powered (if you can call it that) the Gunners to an impressive win against Chelsea last week, filling in for the injured, and out-of-form Lacazette. Nketiah deserves another start and should get it vs the porous United defense. Mateta saw a rare benching last weekend but looks likely to come back into the Palace side after his replacement Edouard failed to impress. His matchup vs Leeds sees him 35% likely to score. 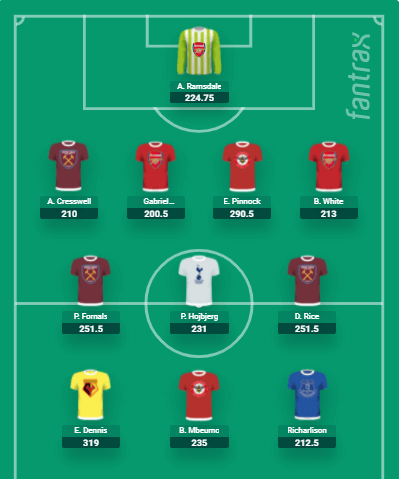 Our sits XI consists predominantly of good players in tough matchups. Cresswell faces Chelsea, Ramsdale, White and Gabriel face United, and Pinnock faces Spurs. All face tough opposing offenses, likely to score 1 or more goals, and the defenders don’t score enough ghost points on average to justify that downside. In mid we have 2 more West Ham sits in 96% rostered Declan Rice and 94% rostered Pablo Fornals. Fornals has started on and off but is averaging 3.5 in his last 4 appearances and faces Chelsea. Rice has been a bit better, averaging 6.7 in the same time period, but offers almost no upside, and an even smaller likelihood of achieving it against Chelsea. Our favorite sit pick, Hojbjerg who’s 86% rostered despite averaging less than 6 points over the last 10 weeks rounds out the engine room. Up top, we’re opting to bench the in-form Emmanuel Dennis as he faces the banged-up, but always deadly Man City defense. Richarlison will be a great pick in coming DGWs but against Liverpool, he’s better left on your bench. Finally, one more of the in-form forwards, Bryan Mbeumo, will struggle to acquire the attacking returns he needs to be viable on a weekly basis.