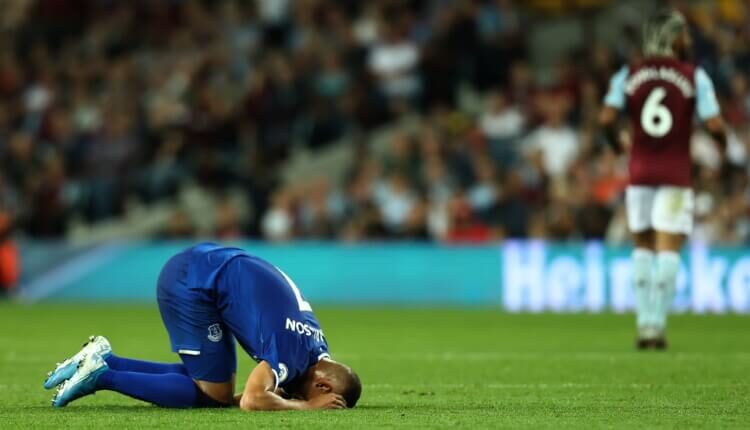 Getting your team selection correct in Draft Premier League is just as essential as your pre-season draft or your weekly waiver wire claims. And that’s exactly why we’re here to help with our Gameweek 32 Start and Sit article! We’re here to help you with some of the big Fantasy EPL decisions you may need to make for the upcoming fixtures. 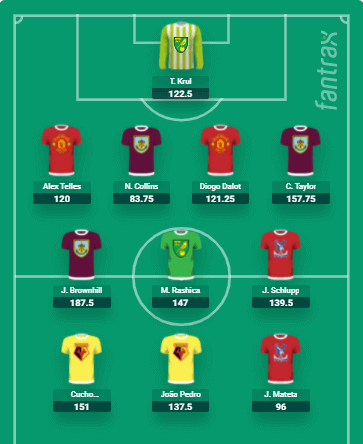 Gameweek 32 finally brings us a single game week again. No poor teams with 2 games to take advantage of this week, but there are still plenty of under-rostered players that you should be starting! On defense, we have 2 sets of 2 with Charlie Taylor and Nathan Collins of Burnley and Dalot and Telles from Manchester United. Dyche’s lads are coming off a vital relegation derby win vs Everton and get another great matchup vs Norwich. Collins should continue to start in Ben Mee’s absence, and he and Taylor have a 28% chance at a clean sheet this week. Meanwhile, Telles and Dalot face the losing side in that same relegation battle, Frank Lampard’s reeling Everton. United is away from home but still has a 34% chance at a cleanie, while Telles should get plenty of attacking points from his set-piece involvement. When a team gives up 3 goals to Burnley, you know their defense is struggling.

In midfield, we have another 2 mids from the Burnley Norwich scrap in Rashica and Brownhill. Brownhill let us down in last week’s double, and Rashica has been a bit quiet lately, but due to the matchup, you should be starting them. Next up, we have the often under-appreciated Jeffrey Schlupp. Jeff’s numbers haven’t been great recently, but they’re deceptive. He’s faced a lot of top 4 sides lately, but when he plays worse defensive teams, he tends to score a lot better.

Up top, we have the dynamic Watford duo of Cucho Hernandez and Joao Pedro. Cucho has been very hot and cold with his latest 5 scores of 3, 25 ,-4, 26, 1 and Pedro’s been mediocre. Well, Cucho’s pattern means this week should be a good one, and what better opponent could there be than Leeds. Pedro has a 28% chance of scoring and Cucho has a 20% chance of assisting according to the oddsmakers. Against Leeds, there should be plenty of key passes, shots on target, and dribbles to be had regardless. Finally, we have the in-form Mateta, who has scored 3 times in his last 4 starts and gets the leaky Leicester defense this week. 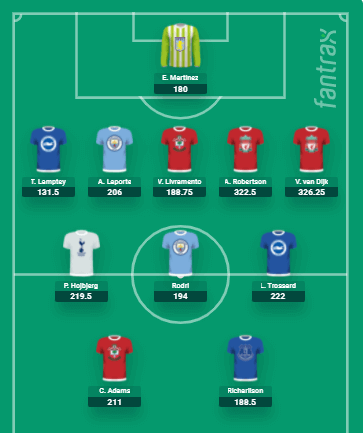 This week brings us one of the most important games of the season potentially, in Liverpool vs. Manchester City. Due to the top 2 teams playing each other, we must offer a word of caution about playing anyone on their defenses: this could be a high-scoring affair. As such we suggest benching 2 of the best center backs in the world in Van Dijk and Laporte as well as Robertson. Yes, all 3 are generally fantastic fantasy assets, but this is the time to leave them on the bench.

Liverpool has a 19% chance of a clean sheet, which is about as low as you’ll ever see that number go for them. City has a 26% chance. Besides those 3, we’re opting to sit 2 more fantasy darlings (or at least former) in Brighton’s Tariq Lamptey and Southampton’s Tino Livramento. Both get tricky matchups vs Arsenal and Chelsea respectively. Brighton actually has the lowest clean sheet odds of any team this weekend with 12%.

Speaking of the Seagulls, Lamptey’s teammate Trossard is another sit for us. Despite scoring 12 against Norwich and 9 against Spurs, all in ghost points, Arsenal away are a different beast and we don’t see his luck continuing.

Next, we have 2 sits XI stalwarts and defensive mids Hojbjerg and Rodri. Consistently highly rostered, these guys are much better left on waivers, or if still on your team, on the bench in harder matchups like this week. Up top, we’re benching Che Adams who has the unfortunate task of facing Chelsea with a 20% chance at a goal and a low floor, as well as Everton’s Richarlison.

Benching Richarlison might be our boldest call of the week as he’s coming off a 43.5 point performance vs Burnley, but hear us out. Richarlison had 2 goals from 2 penalties in that game and his scores prior to that game were 9.5 (with an assist), 3, 4.5, and 1. We’re calling his last performance a fluke, or at the very least pretty dependent on getting an attacking return. Well vs United this week, he’s got a 24% chance at a goal and a 14% chance at an assist. We’re opting to bench him as we think the 65% of the time he doesn’t get an attacking return, he’ll end up a very painful hole in your lineup.