Our Gameweek 30 Chaps Choices article provides Fantrax managers with a Fantasy EPL Sleepers XI.  Our starting eleven of Draft Premier League differential picks will help you find a golden ticket to a big score this weekend!  These hints and tips will give you a better chance of picking up an all-important victory, as one of our Fantasy EPL sleeper picks could easily make the difference in a Head-to-Head game!

Prospects:  After successfully backing Guaita for three weeks in a row, we’re turning our attention to Krul now that the Crystal Palace shot-stoppers ownership is getting fairly high.  The Dutch goalkeeper has played really well this season and has rightfully been earning good reviews in recent weeks.  Krul made the headlines a couple of weeks ago after helping Norwich to a penalty shoot-out victory in the FA Cup.  This weekend Norwich face Southampton at home, and we’re backing Krul is put in a strong performance.  The Canaries have been playing well in recent weeks, despite only having a few points to show for it.  The Saints are struggling with injuries, and we’re backing the Norwich boys for a victory!

Prospects:  The big man is back in the side, and back to scoring those all-important ghost points.  Burn has gained double-digit returns in all three games that he has played the full 90 minutes in since returning from injury.  This includes games away to high-flying Sheffield United and Wolves!  This weekend Brighton faces Arsenal at home, and we’re backing Burn to score well once again.  The giant defender obviously picks up plenty of aerial points but has a pretty solid distribution across the defensive statistics.  If Burn is a free agent in your Draft League, we highly recommend snapping him up for Gameweek 30; he won’t be a sleeper for much longer!

Prospects:  Now here’s a defender we’re pretty excited about for this weekend.  We know Fernandez isn’t a very glamorous pick, so bear with us.  This weekend Newcastle face Sheffield United at home and have performed well defensively during the last two games.  The Magpies have gained two clean sheets in a row.  Coupled with this, Sheffield United don’t actually score that many goals.  The Blades have only scored more than one goal in a game once in the last 13 games!!  Therefore, Fernandez is unlikely to concede more than one goal.  And perhaps the most important aspect of this Gameweek 30 sleeper pick… Fernandez will be playing against Oliver McBurnie, so aerial duels will be on the cards.

Prospects:  Big Gary Cahill!  He’s so hot right now!!!  The veteran Crystal Palace defender is on fire at the moment, after gaining three double-digit scores in a row.  Last week Cahill made an appearance in our Reserve XI, but this week we’re upgrading him to the Starting XI!  Crystal Palace faces Bournemouth away this weekend, and will be on a high after winning three games in a row, and gaining a clean sheet in all three of these games!!  We’re expecting another solid defensive display from The Eagles, and we would really recommend bringing Cahill into your side if you can.  The Englishman won’t be a sleeper for much longer after Gameweek 30!

Prospects:  Duda put in a decent performance last week as The Canaries lost to Sheffield United, and we’re backing him for a double-digit haul this weekend!  Norwich host Southampton in a game they simply have to win to keep their survival hopes alive.  As we’ve mentioned above, The Saints are struggling a bit with injuries, and we’re backing Norwich to gain the victory.  Duda will be key to this, and we fully expect a double-digit ghost points score from our second favorite Canary!  The Slovakian midfielder is a great target to trade in ahead of this weekend if you’re facing a crunch game in Fantasy EPL.

Prospects:  Last time we backed Barkley in the Starting XI he was benched by Lampard, but after a HUGE score of 37 points in our Reserve XI last week, we’ve got no choice but to promote him!  Chelsea has lots of injury problems at the moment, so Barkley is currently guaranteed to start.  The fact that the Englishman provided two assists and six key passes in Gameweek 29, he’s extremely hot right now.  This weekend The Blues face a trip to struggling Aston Villa, and surely Barkley will score double digits once again.  Sign him up, Chaps!

Prospects:  Another Newcastle man who has performed well over the last two games is central midfielder, Isaac Hayden. The Englishman has produced back to back double-digit scores, and we’re hoping for another in Gameweek 30. Newcastle’s fixture against Sheffield United will be a physical battle between two usually resolute teams. We’re not expecting many goals, but hopefully a decent combative display from Hayden alongside the more creative Shelvey.  Hayden is a great sleeper pick for Gameweek 30.

Prospects:  With Southampton struggling with injuries and suspensions in midfield, Boufal looks set to start once again this weekend.  The Moroccan international has always been a decent asset to own in Togga scoring, but he has never established himself in the Southampton side.  This weekend Boufal faces a Norwich side who are desperate for a win, and we’re hoping for a decent ghost points score from the Southampton man.  Don’t expect Boufal to be on the winning side though; Southampton has lost the last five games in which he appeared in!!!  Boufal didn’t appear during any of Southampton’s four wins since January 1st.

Prospects:  Boy has Pedro been on fire recently!!  The Spanish veteran has started four of the last five games, after sitting on the sidelines for most of the season prior to this.  After a couple of average performances in Gameweek’s 25 and 26, Pedro came back into the side for Gameweek’s 28 and 29 and scored HUGE.  The Chelsea man bagged points scores of 16.5 and 26.5 and featured in our Reserve XI for that 26.5 haul last weekend.  This weekend we’ve got no choice but to promote Pedro to the Gameweek 30 Sleepers XI, as the in-form Chelsea face a trip to struggling Aston Villa.  If Pedro is still a free agent in your Draft League, you need to sign him up.  Chelsea has lots of injuries in attacking positions, so he will continue in the side!

Prospects:  January signing Jarrod Bowen has started the last two games for West Ham, and has duly gained double-digit scores in both fixtures.  A goal and 23 points was gained in Gameweek 28, and this was followed by a ghost points score of 11.5 points in Gameweek 29.  If Bowen is currently a free agent in your Draft League, he needs to be signed for Gameweek 30 whilst we can still class him as a sleeper!!  We would also highly recommend trying to trade Bowen in, as he’s showing great form, and has a guaranteed Gameweek 31 match.  This weekend The Hammers face Wolves in front of their own fans.

Prospects:  Earlier in this article we highlighted Fernandez’s points potential due to the aerial duels with Oliver McBurnie… and therefore the Sheffield United forward has to make our Sleepers XI for Gameweek 30 too! The Scotsman has been on good scoring form in recent weeks, after nailing down his spot in the side and producing decent ghost point scores most weeks! This weekend we expect McBurnie to score well against a physical Newcastle backline. We’re quietly a little excited about watching this battle on Saturday afternoon. Hopefully, both Fernandez and McBurnie come away with decent points hauls. 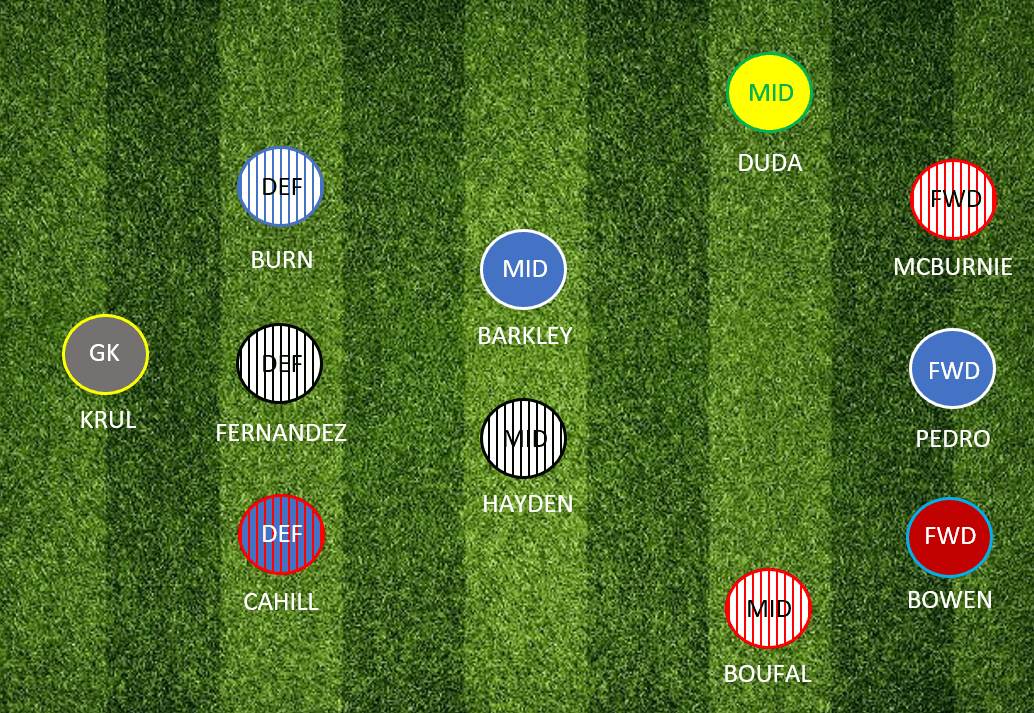