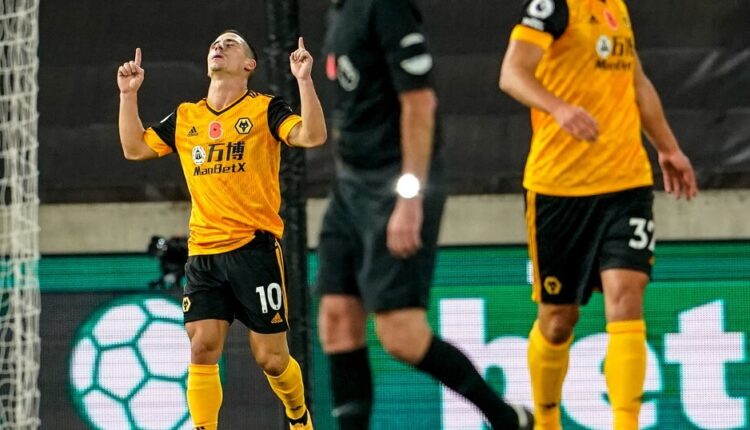 Getting your team selection correct in Draft Premier League is just as essential as your pre-season draft or your weekly waiver wire claims. And that’s exactly why we’re here to help with our Gameweek 26 Start and Sit article! We’re here to help you with some of the big Fantasy EPL decisions you may need to make for the upcoming fixtures. 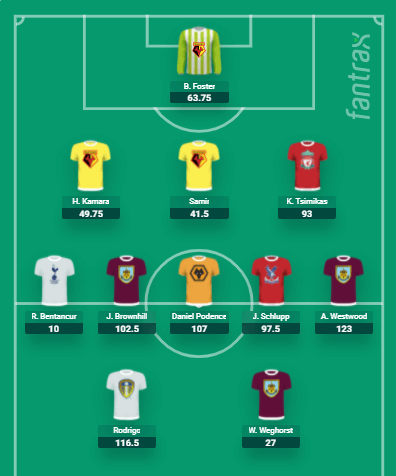 Yet another double gameweek, and this time it’s a big one! 8 teams play 2 matches this gameweek, and naturally, we will be picking plenty of under-rostered players from these teams. In fact, 11 of our 11 picks are players from these DGW teams, but only 10 of them can reasonably be expected to start both of their team’s matches. The exception is Kostas Tsimikas, the backup Liverpool left back, who always seems to score well when he gets a chance to start. With his team having UCL and Carabao cup final games sandwiching their DGW games, we think there’s a great chance for Tsimikas to get a rare start in place of Robertson, and against Norwich or Leeds, he’s a must-start. Alongside him in the backline, we have a Watford stack of Kamara, Samir, and keeper Ben Foster. Watford is away to Villa and then home to Palace which are mediocre but not great matchups. Still, the 3 Watford choices are very likely to start 2, score decently in terms of ghost points, and Hodgson is doing his best to shore up their leaky defense. Further forward we have a trifecta of Burnley options. Westwood and Brownhill in the midfield and Weghorst up top are generally uninspiring options but suddenly become useful in the DGW (as well as being useful in GW27 when only Burnley has a DGW). Elsewhere we have the inconsistent Podence and Rodrigo who both all of a sudden have stomach-able floors. Finally, we have Bentancur who has gotten into Conte’s good graces and should start 2, and Schlupp who scores well per start and has a chance at starting 2 with Hughes potentially out injured and Kouyate yet to return. 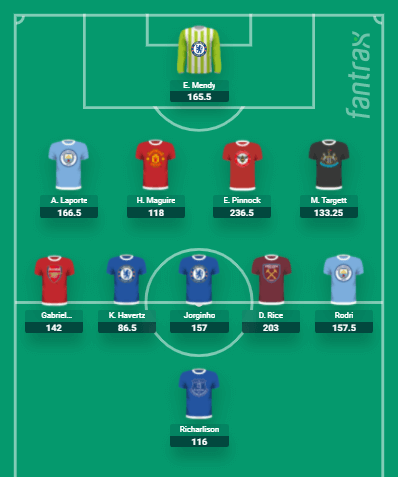 As opposed to our scrappy, underappreciated DGW starts team’s players, our sits of the week are predominantly well-known players on decent teams only playing 1 game this week. In the back we have 3 big 6 players in Mendy, Maguire, and Laporte. All would be startable generally but in mediocre to bad matchups and only each playing 1 game, there are far better options this DGW. Pinnock and Targett have Arsenal and West Ham away respectively, with only 17% clean sheet odds each. In the engine room, we have 3 defensive mids with decent floors but little upside in Rodri, Jorginho, and Declan Rice. In a DGW where you can get plenty of players with higher floors and upsides due to playing 2 games, there’s no reason to start these types of players. Alongside them we have Havertz, who has no floor, and Martinelli who’s been in good form, but is suspended for Arsenal’s first game of their DGW, and is too big of a risk to roll out in a maybe start vs Wolves in their second game. Finally, up top, we have Richarlison who without an attacking return (which he has a 35% chance of getting) is destined for a sub 5 score away to the strong-at-home Southampton. With that all said, use the DGW’s to your advantage, and don’t bother playing your low floor, SGW options in Gameweek 26.