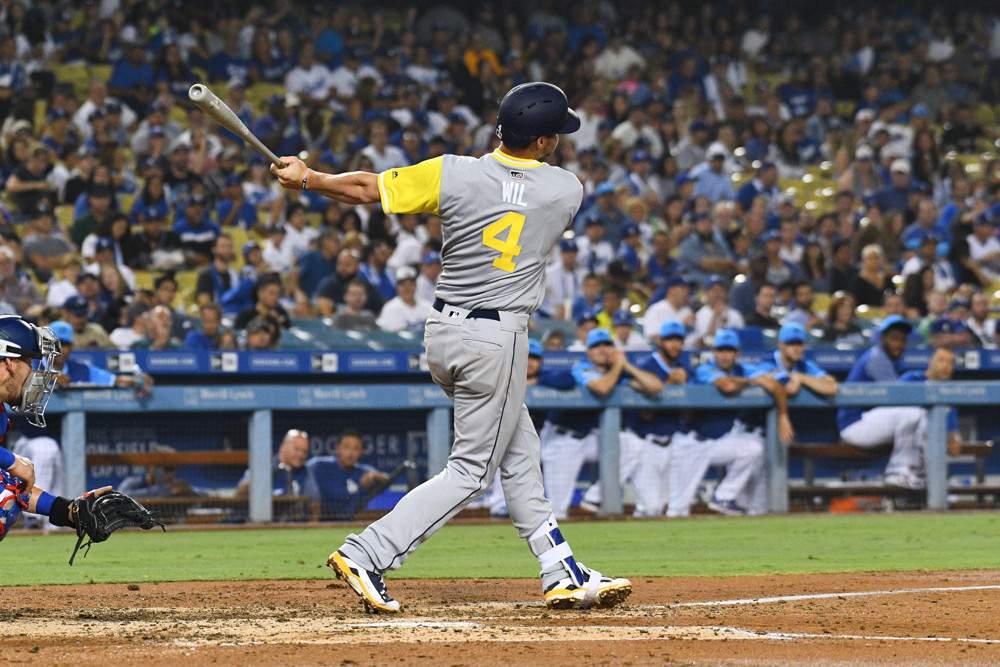 The proverbial hot corner is awash in talent this year. I’ll get into that a bit more momentarily, but first I wanted to use this space to offer up some of my deep, deep third base sleepers. Matt Duffy in Tampa could work his way into leadoff duties and score a lot of runs with double-digit homers and steals. Todd Frazier (if healthy) could still be useful in OBP leagues with some power and speed. Colin Moran hit .300 over the second half of 2018 and is the starting third baseman for the Pirates, for Pete sake. He’s the 29th third baseman off the board! Anyway, while I like those values in deep leagues, the one who I can’t help but love in spite of myself, is The Dude.

Dokken’s Dudes and Don’ts for Third Base

Red Dragon is an awesome movie. Somehow it is rarely talked about these days despite being a Hannibal Lecter movie with a superstar cast including Anthony Hopkins, Edward Norton, Ralph Fiennes, Harvey Keitel, and more. I’ve seen it a bunch of times, and now every time I see the name Will (or Wil, in this case) I start talking like Lecter to Norton’s character, Will Graham. “Tell me Wil, did you enjoy it? Your first full season without injury? You’re a remarkable boy, I admire your courage. I think I’ll eat your heart.” And then I click “draft” because I love his value this year. And his liver.

Wil Myers put together terrific back-to-back seasons in 2016-17 as the primary first baseman for the Padres. Safe and sound at first base, it was hard for the fragile Myers to find excuses to hit the DL (now the IL). Then, for some reason, the Padres decided to give Eric Hosmer $144 million to stick around for eight years. Myers was booted off of first base and split time between third and the outfield. It predictably didn’t work out, as he was limited to 83 games due to injuries.

His on-pace numbers we right on the money with his prior two years of production, which is to say: borderline elite. He had 58 homers and 48 steals combined in 2016-17, although the average leaves something to be desired. He’s just about the only fantasy option at third base besides Jose Ramirez who could realistically steal you 20 bases. All he really needs to do is stay healthy, and he is one of the few hitters in baseball with true 30/20 potential. The lineup around him is improving rapidly as well, and he’ll be hitting right in the middle of it.

I’m willing to gamble on his health since his risk is very much baked into his 3B11/ADP89 price tag. Since he’ll be primarily playing the outfield, I’m still going to factor in about two weeks on the Injured List. Even if it’s a bit more, Wil Myers + Replacement Player is still mighty fine, especially in standard mixers where the replacement level is high. If you play in a deeper league, while the risk is worrisome, the 3B/OF dual eligibility is quite nice. I’d like to eat his ROI potential with fava beans and a nice chianti. *Makes grotesque sucking sounds*

I feel a bit dirty on this one, I won’t lie to you. Typically I like to pick a more highly drafted player to tell you to steer clear of, but I just can’t plop a name in here I feel fully confident in. The top 10 third basemen are rock solid. I weighed my options. Jose Ramirez could put up his September 2018 numbers for a full season. Maybe Vladito struggles as a rookie. Perhaps Father Time or another shoulder injury finds Matt Carpenter. In the end, I can’t convince myself of any of these things. So, we dip down to 3B16, Rafael Devers.

Devers is a darn fine player with a long, successful career in front of him. I won’t argue that. I love him in dynasty leagues. However, in 2018 he hit just .240 with 21 homers, scoring 59 runs and driving in 66 from the bottom half of the order. As stacked as the BoSox are again in 2019, it’s unlikely he moves up in the order. He has plenty of raw power but hasn’t fully developed the contact ability to tap into it. He was also horrible against lefties, with a .619 OPS and 29.9% hard contact rate, which could lead to a platoon situation.

Again, not to take anything away from him – what he did as a 21-year old was impressive. For fantasy purposes though, I’m not sure we get an age-22 breakout, which is very much baked into his ADP. If you like his skill set, it’s rather easy to find. In fact, you could wait a whopping 135 picks from Devers’ ADP of 133 for…

Aside from an overwhelmingly mediocre batting average, that’s a studly fantasy hitter. He obviously had an awful 2018, most of which he missed due to injury…and now he’s worthless? I just don’t see the logic in that. He is the 22nd third baseman drafted, with an overall ADP of 268.

Assuming he is back to full health, what is holding him back from a repeat of his 2016 numbers? The 2017 R+RBI totals might be a bit strong considering the Diamondbacks lineup these days, but Lamb is still set to turn a tidy profit from this draft price. So he can’t hit lefties, so what? Travis Shaw can’t hit lefties either, and he’s being drafted at pick 98! There is little stopping Jake Lamb from being a poor man’s Travis Shaw. On top of the value you’re getting with Lamb, you will also be able to deploy him at either first or third base shortly into the season as he moves across the diamond to fill Paul Goldschmidt’s shoes. Enjoy your Lamb with couscous and sweet, juicy ROI.