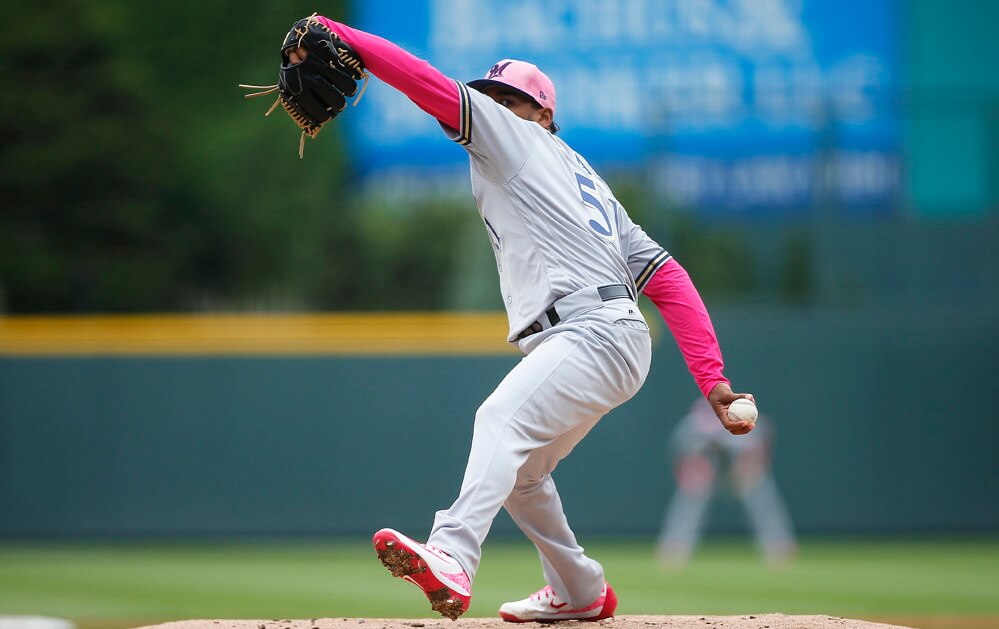 There’s nothing quite like a global pandemic to suck the fun out of this series. The coronavirus has led to the postponement of the MLB season by at least two weeks, and Spring Training has come to a halt. That is less than ideal. Since I have no way of knowing when the season will actually start, I’m just going to write my projections as though we were going to get a 162 game season. If it turns out we get less than that, prorate the projections as necessary. Be smart and stay safe out there, fam.

Already the helium has brought Frankie Montas up higher than he was when I declared him my Target Supreme on the Nasty Cast. The Target Supreme, if you don’t know, is my favorite value in all the land. Montas has climbed to SP27/ADP87, but I still like him there.

Montas pitched like a flat-out ace in 2019. He was limited to 16 starts due to a PED suspension, of course, but PED’s weren’t the key to his success – it was a new splitter. He deployed the splitter just over 18% of the time, and to great effect. The pitch earned a 22.8% whiff rate with just a .155 batting average against. It helped him vastly improve his average exit velocity, which at 80.2 MPH was the best pitch in his arsenal by far. He technically even got a bit unlucky per results, with a .197 xwOBA on the splitter compared to his .209 wOBA. His 3.8% overall barrel rate allowed ranked in the top 4% of MLB.

The downside here is that Montas has never been a workhorse. His career-high innings pitched was 136.2 in 2018. With the potential of a shortened season looking very real, that actually helps the case for Montas. Fewer games equal a higher percentage of the season Montas contributes to before any sort of workload-related shutdown. A strong defense and great home park to pitch in further help his cause. I expect ace-caliber numbers from Montas with an SP3 cost.

You all have to help me out with this one because I have somewhat of a mental block. I cannot get past the fact that Max Fried looks like the beginning of a sentence that never gets finished. Max Fried an egg. Max Fried some chicken. Max Fried his foot when he stepped on his George Foreman grill. Nope, just Max Fried. It’s not even pronounced that way (it’s freed), but looking at the name drives me up the wall.

So, it is with a vein popping out of my neck that I write this love letter for the value of Max Fried. I love me a lefty (as a fellow lefty myself), and this lefty dropped a crappy changeup for a lovely slider in 2019. The slider induced a 15.2% whiff rate that fell just 1% behind his high-spin curveball. It allowed a mere .200 BAA and was his most effective pitch at limiting exit velocity. It’s not as good by the numbers as Montas’ splitter, but it did help him achieve a top 4% barrel rate of 4.4%.

I’m going to wind up eating a gallon of crow on Zac Gallen. I was pessimistic that his kitchen-sink style skillset would translate to major league success. While he doesn’t have electric stuff, he is very effective with what he does have. He has above-average command, although that weirdly didn’t translate in his MLB debut season. After plowing through the minor leagues without ever posting a 3.25 BB/9 or higher, he walked 4.05 BB/9 in his debut. I don’t expect that to repeat.

Gallen complements his rising fastball with a trio of offspeed pitches in a changeup, curve, and cutter. His excellent changeup got a whopping 21.6% whiff rate in 2019 and both his curve and cutter were over 15%. He got a ton of reaches outside of the zone overall at 34.8%, so he’s fooling batters left and right. I don’t know if the strikeout rate will quite hold up to the 10.8 K/9 of 2019, but the walk rate could be cut by a whole walk per nine.

Gallen threw over 170 innings in 2019 and won’t face any workload restrictions in 2020. The Diamondbacks surprisingly pushed their proverbial chips into the middle of the table this offseason and should be competitive in 2020, so wins shouldn’t be an issue. I can’t help but get 2019 Shane Bieber vibes when talking about Zac Gallen 2020. He should return a tasty profit from his SP34/ADP112 cost.

Keller features a 95 MPH fastball with a 91st percentile spin rate. That’s a solid foundation. He complements the fastball with a high-spin curve with 2,770 RPM that ranks in the 85th percentile. His primary offspeed was actually a newer slider that induced a 26.8% whiff rate in 2019 with a .217 xwOBA. This Dude can miss a ton of bats and has enough command to keep everything around the zone.

With about 150 innings under his belt in 2019, there should be no workload restrictions for Keller in 2020. With a totally new regime, things can only get better. Seriously, the old regime never even told Keller what FIP was. Mitch Keller learned about FIP from a scoreboard. I’m not making this up. Keller technically has to earn himself a rotation spot out of camp, but with this information in mind, they should just hand him the spot as an apology for the old regime. The Pirates are going to be a bad team this year – if not the worst in MLB – so wins are going to be an issue. That said, I’ll take my chances with wins considering the strikeouts you will get from the SP65/ADP227.

The Brewers clearly saw something in Freddy Peralta this offseason. He signed a 5-year, $15.5 million contract as the team rolled into Spring Training. Well, he has shown us some things for fantasy purposes, too. Peralta got our attention last year as his velocity skyrocketed from 90.8 MPH in 2018 to 93.6 MPH. Unfortunately, the fastball has been nearly his only weapon to date. While he can manipulate the pitch to have it break differently, it’s hard to have consistent success as a starter throwing one pitch 78.4% of the time.

Interestingly enough, Peralta developed a new slider over the winter. He used it in the Dominican League to great effect, finally giving him another option in addition to his curveball. He was already a huge strikeout asset (11.63 career K/9) and presumably, the slider will only help. With the increased velocity and a trio of solid pitches, Peralta could take the fifth starter gig and run in Milwaukee. As the 110th SP off the board with an ADP of 316, you don’t have much to lose.