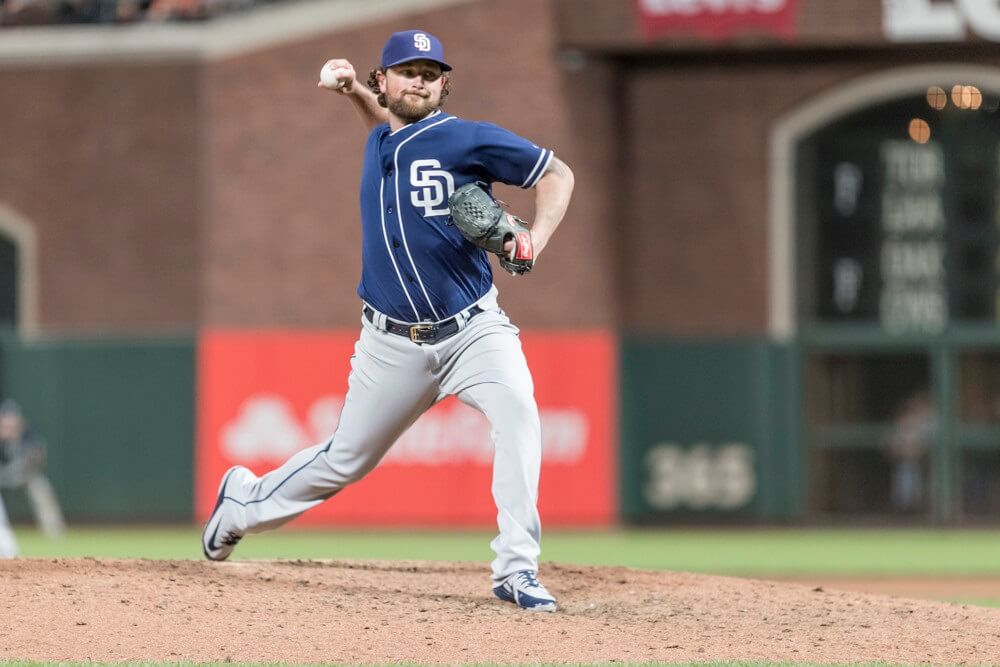 End of the line, folks! Everybody off! It’s been a blast bringing you these Dudes & Don’ts, but this marks the finale of my 2019 series. We’re right up against the start of the season at long last. We’re polishing this series off with probably the toughest position to nail down: Closers. There are still a ton of bullpens up for grabs, some of which will wind up as a dreaded bullpen-by-committee even once the season is underway. There is no shortage of targets to throw darts at towards the back-end of your draft, and we’ll tackle one in particular in the Deep League section. Thanks for reading, and good luck in 2019!

There’s still time! Leagues are still forming at Fantrax.com, so head on over and start or join a league today.

Tarnation do I ever love a good deal! I love them when I’m vacuum shopping, and I love them, even more, when I’m drafting closers. With Kirby Yates, you get the best of both worlds! Kirby is set to really suck up the saves this year in San Diego. One of the primary things I look for in a closer is job security, and Kirby Yates has it. While any closer can be his own undoing due to poor performance, what I’m talking about here is bullpen competition. While Craig Stammen and Adam Warren are fine relievers, they won’t be usurping Yates without Yates performing poorly himself.

Speaking of which, I don’t expect much in the way of struggles from Yates. He has recorded a combined 29.5% K-BB% over his last two seasons with a tasty 3.01 ERA that not even chef Gordon Ramsay could scoff at. Stay in your lane, Ramsay! Yates was overall successful in 2017, and tinkering with a good thing is not usually the best way to go. Yet that’s just what Yates did last year. He ditched the slider he used 24.6% of the time in 2017 and basically swapped it out for a fancy new splitter that he used 36.1% of the time. The splitter earned a devastating 27.35% whiff rate and, most importantly, a 55% ground ball rate. That was a big change from his 33% ground ball rate on the slider in 2017, which was homer-prone, allowing a .359 ISO!

The main question is how many save opportunities will Yates get on a Padres team that is, well…the Padres. You can debate whether they’ll realistically compete or not this year, but in any case, I don’t expect them to be dreadful. As long as they’re a mediocre team, Yates will get his cracks at the ninth inning. He’s only the 14th reliever off the board at ADP 153, making him a pitcher you don’t have to reach for who could potentially finish the year as a top-five closer.

If you’re the type who avoids players with proven off-the-field transgressions, Aroldis Chapman is already off your list. I don’t play that way personally, but I am risk-averse in the early rounds. That’s what eliminates Chapman for me. While he posted an excellent 2.45 ERA and a ridiculous 16.31 K/9, that came with a 5.26 BB/9, diminished velocity, and a stint on the Injured List. It marked his second season in a row with a trip to the IL. In 2017 it was a rotator cuff, and last year it was a nagging knee injury.

You don’t have to bring in the Member Berries or anything, but do you remember a scant few paragraphs ago when I mentioned bullpen competition? Well, there isn’t much chance that as long as Chapman is healthy and getting the job done, anyone would push him out of the closer role. However, you might have heard that the Yankees have assembled something of a super-pen. They’re chock full of former saves-getters like Zack “Don’t Call Me Zach” Britton, Adam Ottavino, and Dellin Betances (when healthy). If Chapman struggles, they could opt to give him another “breather” from the role, with a chance he loses it for an extended stretch to one of those former closers.

Chapman already increased his slider usage nearly 6% last season in an effort to put less pressure on his heater, which is losing its heat. I won’t say that I’m too worried about that sapping his value since the slider is a great pitch that netted a 24.18% whiff rate in 2018. That said, the fact that there are questions at all when discussing a top-five closer who you’re drafting at pick 88 turns me off. Maybe I just need an aphrodisiac. Or maybe I’ll just pass on him and grab someone with fewer question marks. That also eliminates The Riddler. Brad Hand a round or two later sounds particularly delightful. Grawr.

The Deep League Dude – Trevor May

When you’re down in the thirties among relief pitchers, you’re looking for guys who just MAY be closers sooner or later. What do you say, we could lay by the bay and eat some hay! Or draft Trevor May? Yeah, let’s just do that. Mum has been the word on who will close in Minnesota. On top of the lack of clarity is a new manager in Rocco Baldelli who has never been a manager before. We have no track record from him, and he hasn’t given much indication whether he intends to go with one full-time closer or a bullpen-by-committee.

There is no shortage of closer candidates in that pen. The Twins signed Blake Parker this offseason, who saved 14 games with Anaheim last season with a 3.26 ERA but was wildly uneven in that performance. Addison Reed was one of the best relievers in the game from 2016-17 but dealt with injuries and poor performance last season. Even Taylor Rogers – one of just two lefties in that pen – could be in the mix. He added a slider in May (the month, not the player) and was lights-out with a 0.94 ERA and a 35:8 K:BB over his final 28.2 innings. All that said, my favorite is still Trevor May.