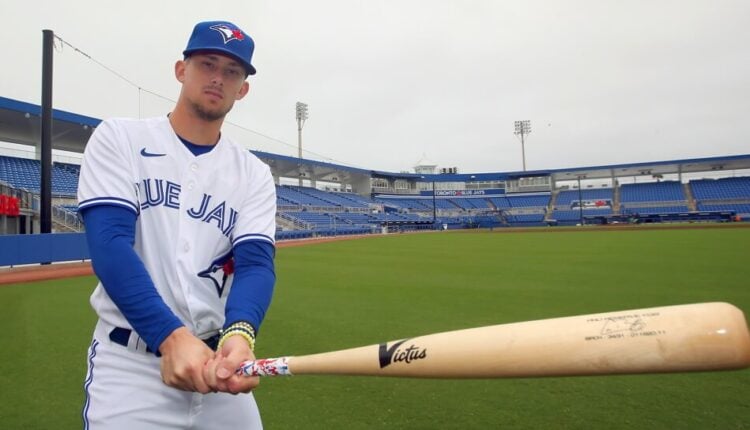 Cold water dripped onto my head as I ducked into the dark alcove. The path ahead would not be easy, but I would not yield. I lit the kerosene-soaked torch, illuminating my surroundings. Out of the corner of my eye, I could see Pete Rose, clad in a palm leaf mankini. He hissed at the light and scuttled down a small offshoot, muttering something about the Hall of Fame. I looked up at the ladder before me, which would take me to my destination. It was made from broken bats. I rubbed the pine tar on my palms to aid my grip for the ascent.

For 17 days I had waited on this tropical island. I sat, prepared, waiting for the perfect conditions to align and reveal the entrance to the cave. At last, as I was hurling kiwis at a particularly snarky Amazon parrot who really knew how to push my buttons, a waterspout pulled back the tide at dusk and revealed my entrance. I reminded myself that all of that patience can’t go to waste as I climbed the final rung of the broken-bat ladder, my legs burning. I had to be almost to the peak of the mountain now, but inside it, everything looked the same. At last, I knew I had reached my destination when I smelled the chewing tobacco. I pulled myself onto the platform. An ancient voice croaked as my torch illuminated the giant talking baseball – the fabled Lord Llabesab – and I could see its mouth move at the stitches.

“Come for the Don’ts, have you?” It nodded, knowingly, its gaze upon the watery stone floor. It spit chewing tobacco to the side and looked up, its eyes locking with mine. “Yes…I will show you.”

So, now that you know that I don’t actually choose these names myself so much as I get them from a mystical ancient baseball god, you probably don’t care about how I pretend to come up with the Don’ts. If you don’t buy the Lord Llabesab story though, and you want the long and short on how I “decide” my Dudes & Don’ts, check back in with my previously released Dudes list. For my Don’ts, I focus on players who are drafted in the early rounds in every league. Based on their ADP, I expect them to fail to return their draft value. All NFBC ADPs referenced will be from March 1st onward.

I am also fading Sal Perez, FYI, who is being drafted even earlier. Perez has an ADP of 80, while Will Smith’s is later at 101. Recency bias is hitting hard with Perez, who is usually a great value. An anomalous .333 average and .300 ISO over 37 games in 2020 have drafters reaching way too far on him. However, I dislike Smith’s ADP even more. Perez plays a ton of games and gets an edge over most drafters because he accrues extra plate appearances. Smith isn’t going to have that. Dave Roberts has already said he plans to play Smith “around 90 games”, which puts him in line with most catchers these days. He’s a great talent (I mean, have you listened to Miami?) but he’ll be too busy Gettin Jiggy Wit It to justify a 101 ADP (118 on Fantrax). There are just too many great hitters and pitchers on the board at that point for me to pull the trigger on Perez or Smith.

Investing in a player at peak value is never something I’m interested in. The price tag on the reigning AL MVP isn’t obscene, per se, at 39 (4th 1B). Still, he’s a pass for me. First off, losing Eloy Jimenez for most or all of the season hurts his R+RBI potential. Let’s all take a moment to pour one out for Eloy. Secondly, Abreu’s plate skills are slipping. He already walks at a below-average clip, and meanwhile, his strikeout rate has been climbing. His contact rate has dropped 7.6% since 2017, including a 5.7% drop off last year. His swinging-strike rate also jumped 2.6% to 13.8%. I don’t expect another .350 BABIP to float a .300+ average. That makes him more of a good-not-great 1B option rather than the elite MVP bat you’re paying for. I wouldn’t be surprised if he put up a line similar to Anthony Rizzo, who you can get nearly 65 picks later at 104 (96 on Fantrax). 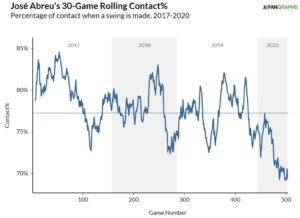 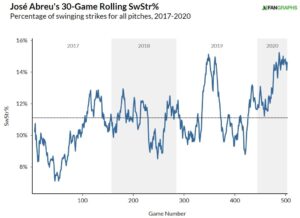 This is perhaps the most perplexing ADP of the season for me in standard roto leagues. He is another one whose positional versatility is very handy (2B/3B/OF) and it would be easier to just put him as a Don’t at all of those positions. Lord Llabesab would call me lazy if I did that, though. I dare not upset that mysterious ancient talking baseball. OBP leagues are different as Biggio might lead the league in BB%, but in standard roto, you’re looking at a guy who could realistically hit .230. He also really only has power to the pull side, so 20 HR might be a stretch. He is an opportunistic base thief, as he has never been caught (20-for-20) but isn’t a burner (72nd percentile sprint speed). Twenty steals seems like a ceiling projection. To make matters worse, he may hit down in the lineup more often than not following the additions of George Springer and Marcus Semien. That hurts his PA ceiling, also lowering his R+RBI opportunities. There’s really just nothing to justify his 66 NFBC ADP (4th 2B), 55 on Fantrax. 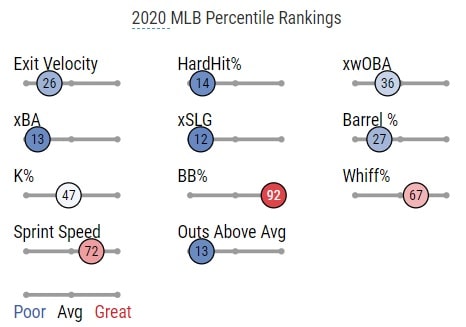 How does a player with a .251/.284/.415 career slash line grab ya at ADP 24 / SS 5? Even the more affordable ADP 47 on Fantrax is out of my price range. Yes, he’s projected to lead the league in steals. That’s why he’s appealing in a lot of NFBC overall contests where you want to swing for the proverbial fences. The hope in standard leagues is that you can just draft Mondesi and tear up your cheat sheet with other steal sources. The downside is that he could easily get bumped to the bottom of the order if he’s not getting on base. As you can see from the nifty little Statcast sliders below, his…ehh…5th percentile xwOBA doesn’t exactly scream top-of-the-order bat. His BB% also consistently ranks near the bottom of the league. I can’t bank such an early pick on a one-category monster who could sink me in every other category, especially if his BABIP dips below .330. 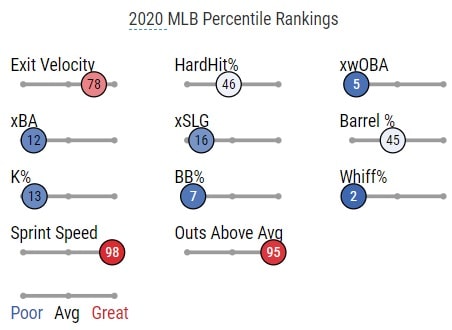 The longer you stare at the name LaMahieu, the more convinced you get that someone just sneezed while typing and it’s all a big typo. Similar to the vowels in his name, he’s all over the place in fantasy. The 1B/2B/3B eligibility is handy dandy. He’s also about as close to a lock as you can find to hit .300. So what’s not to like? A lack of category juice from the player you’re drafting at 27 overall (3rd 1B) turns me off. 2019 was the only year he’s hit more than 15 HR. He also hasn’t stolen more than six bases since 2016. While the batting average anchor is really nice, and the R+RBI should be sexy, it’s gonna be hard to catch up in HR & SB. The steals in particular will be hard to catch up on, considering most of the big SB contributors are going very early. You’re either passing up on elite pitching or a ton of category juice with LeMahieu. The DJ is not playing my jams this year.

Speaking of recency bias…wait, were we talking about recency bias? I guess that was a few players ago. I’m sure you all remember, right? Recent recency bias talk. Anyway, Conforto had a .253 average with a .294 BABIP over 2,268 PA from 2015-2019. In 2020, he hit .322 with a .412 BABIP. Does that seem like an outlier to you, too? There were no real changes in his batted ball distribution outside of a 30.3% line drive rate, well above his 22.7% career average. That’s a stat that is not sticky at all year-over-year. I’d expect him to return to his typical Conforto ways for 2021. That is not a bad player, but it’s not a top 20 outfielder. With an ADP of 72 (18th OF), I’ll take a similar skillset later in drafts. Or just take Austin Meadows, who has a similar ADP but I expect to rebound after a COVID-altered 2020 debacle.

There is no shortage of SPs I don’t care for at their ADP. Tyler Glasnow is not someone I’ll draft at SP 15 on Fantrax, although the notion of him adding a slider this spring would be huge for him. Dinelson Lamet’s arm is barely attached, he’s still got just two pitches, and he’s got an ADP of 112 on NFBC. However, the player who earns the dubious Don’t dishonor for 2021 is one Zach Plesac. Not only did his COVID-related antics turn me off last year, but I also don’t want him anywhere near my team as my likely SP2. His command needs to be impeccable to repeat his sterling 24.8% K-BB%. A .224 BABIP and 91.7% strand rate won’t sustain, either. He’d have to fall roughly 60 picks into Sandy Alcantara territory before I’d be interested, and even then I’d prefer Alcantara.

This ties in with my Dude at Closer, Nick Wittgren. Now, I am not impervious to the sexiness of all the Karinchak strikeouts. However, it’s the role that worries me. As the sixth closer off the board, Terry Francona’s comments about other relievers potentially closing games have to be concerning. There are also the financial ramifications I went over in the Nick Wittgren write-up in my Dudes list. Karinchak’s control has also been highly erratic, so you might not get the type of elite closer WHIP you’d like at ADP 105 (120 on Fantrax).

Dynasty Sells to Consider Prior to the 2021 NFL Draft