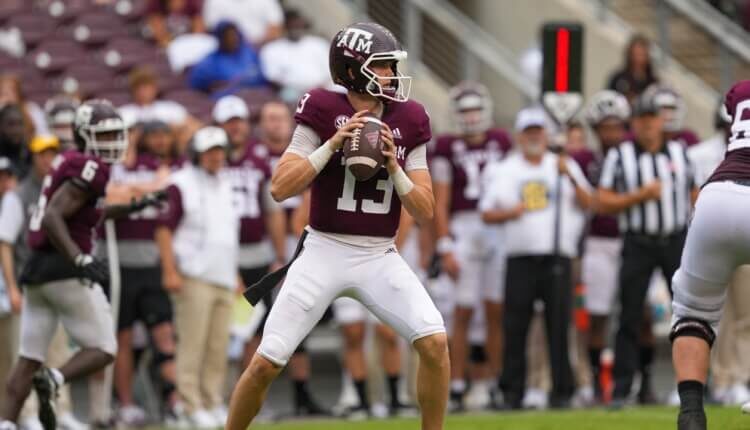 The Texas A&M quarterback did throw two interceptions last weekend, but all in all, he had a solid performance, throwing for 364 yards and adding three touchdowns. We can let poor-weather be a valid excuse for the 11 incompletions and two interceptions. King will dominate an Appalachian State defense that just gave up 567 yards and 63 points to North Carolina in Week 1.

Jahmyr Gibbs did lead the team in carries (9 out of 32). With this game looking to be a bit closer than the Utah State contest, I expect him to get more than nine carries and be the main focus in the run game against the Longhorns. So with Deuce Vaughn, Chase Brown, and Braelon Allen being forecasted as the heavy favorites for DFS lineups, Gibbs is a good guy to look at. Another solid name to consider for the Day slate is Jabari Small ($8,100)

This number is bizarre to me: Konata Mumpfield led the team in receptions and had a decent showing against West Virginia last week. He is a name that is surely worth more than the price tag this week, giving him great value. Mumpfield could be this week’s Zay Flowers breakout.

The Sooners’ speedster was able to notch a touchdown last week and is one of the most dynamic receivers for the Hogs. I expect another good showing from Haselwood, and if he can get in the 12–18-point range, that’s fantastic value at this number.

The Eagles’ dual-threat signal caller is one of the best, not talked about quarterbacks, and certainly, has an NFL future. Jurkovec did throw two interceptions last week, but nearly eclipsed 300 passing yards and had three touchdowns. If he can clean up the interceptions, there is little reason to think he won’t post a 25- to 30-point night against Virginia Tech.

If you are a CFB fan, you know how the Iowa game went. Quarterback Spencer Petras is bad, really bad. But Gavin Williams missed last week and should provide a bit of a spark for the Hawkeyes this weekend. The Cyclones defense is not good, and Williams will get a lot of looks with the struggling QB play.

Isaiah Williams is a high-volume guy and he was able to get 112 yards and a touchdown last week. Across the first two Illinois games, Williams has averaged 8 receptions and with the weak UVA defense, expect this playmaker to be involved.

If you are looking for a stack for the night slate, take Jurkovec and Zay Flowers. The Boston College playmaker is Jurkovec’s favorite target in this Eagles’ offense. Flowers totaled 117 yards and 2 touchdowns on ten receptions last week. Though he now has a high price tag, Flowers is a top receiver in the nation and is expected to haul in around 100 receiving yards a week.

On the Day slate, I am attacking the Wake Forest-Vanderbilt and Houston-Texas Tech games, placing three players in my Fantastic Four for readers to build a cash game lineup. For the Night slate, both E.J. Smith and Dominic Richardson are tremendous values at running back and are a dynamic duo in cash games.

Each week, Ryan and I will each provide three CFB player props for Saturday’s games for readers.

The Fantasy Hoops Podcast: “Our Guys” We Aren’t Passing on Drafting