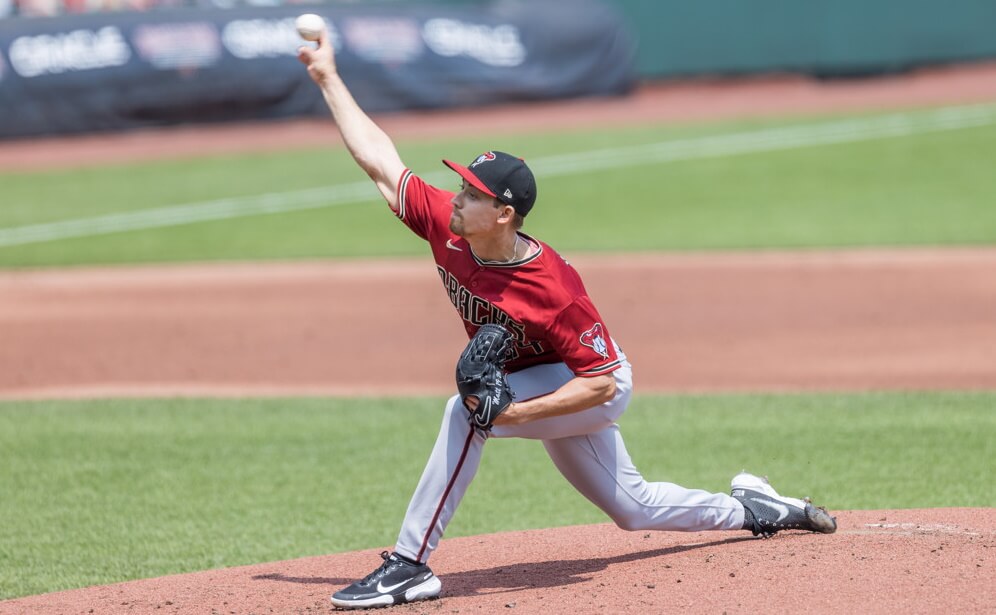 When looking at deep league starting pitchers, we’re looking at players going past pick 400. Some of these starting pitchers struggled or suffered injuries in 2020, and thus, they’re falling in drafts. Make sure to check out fellow FantraxHQ writer Jorge Montanez’s article – 7 Late-Round Starting Pitchers Worth a Gamble posted in late December.

After digging through NFBC ADP, I’m finding several deep league starting pitchers with an ADP in the 400-500 range that pique my interest. Who knows, we may even dig farther down past pick 500 for some gems in the last few rounds of some best ball or deep leagues. A common theme with these deep league starting pitchers – they don’t go deep into games and struggle to pitch the second or third time through the order. That said, each of these pitchers provides us with reasons for optimism worth their ADP past pick 400.

Weaver’s 63.2% LOB% in 2020 lowered from 78.6% in 2019. Factor in the low .292 BABIP allowed in 2019 compared to his .349 BABIP in 2020. When we add those two factors plus the increased walk rate, Weaver appeared a bit unlucky in 2020. I like that he’s added the cutter more into his arsenal over the past two seasons. Although Weaver’s pitch mix and usage looked relatively the same, he lowered the cutter usage by 2%. We also noticed the zone rate on the cutter changed significantly. In 2019, Weaver pounded the zone with his cut fastball, which boasted a 62.6% Zone% compared to a 34.2% Zone% in 2020. Another potential reason for the increased walk rate.

Another notable plate discipline stat for Weaver involves the higher zone contact rate for his changeup, one of his best pitches. The swinging-strike (18%) and whiff rates (34%) on the changeup remained about the same in 2019 and 2020. That said, maybe Weaver struggled with the feel for the cutter and changeup. Regardless, when hitters make a ton more zone contact (+13%) on a pitcher’s best pitch, it’s likely that shows up in the surface stats.

Similarly, batters chased four-seamer less in 2020 with a 24.1% O-Swing% in 2019 and 19.5% in 2020. Hitters also smacked around his four-seamer a ton more in 2020. We can see the results below. We’ll note that the expected stats on the four-seamer finished almost identical the past two seasons, so Weaver likely suffered tough luck in 2020.

Luke Weaver reached a career-high 136.1 innings in 2018 with the St. Louis Cardinals, so the innings projections are a reasonable concern. The BAT projects Weaver to toss 141 innings with a 4.73 ERA and 1.35 WHIP. Sure, the projected ratios make us cringe, but Weaver should likely finish somewhere between his 2019 and 2020 numbers. I expect him to produce better ratios than the projections. Weaver tops the list of deep league starting pitchers.

I know our fearless leader Eric Cross loves the pitching staff the Red Sox keep adding together. Joking, of course, but in a way, we have some sleepers in Nathan Eovaldi, Garrett Richards, and the post, post, post-hype sleeper in Nick Pivetta. The Red Sox recently signed Richards to a one-year, $10 million contract pending a physical. The words, pending physical, describe his journey over the past five years. Granted that it’s all small samples from 2016-2020, but Richards recorded an ERA of 2.34, 2.28, 3.66, 8.31 (8.2 IP), and 4.03 in those seasons. Can you believe Richards didn’t land on the injured list during the entire shortened 2020 season? Hopefully, he stays healthy in 2021.

Richards still throws gas with a four-seamer averaging 95.1 mph that he uses 46.3% of the time. In the past, he sprinkled in a sinker and a curveball a bit more. However, in 2020, Richards used his four-seamer and slider over 84% of the time. It’s no surprise his slider records a ton of swings and misses with a 20.8% swinging-strike rate and 39.5% whiff rate in 2020. Richards pounds the zone with the four-seamer at 56.9% but doesn’t miss a ton of bats with a 5.7% swinging-strike rate.

Mills pitches to contact with the second highest Contact% at 82.7% in 2020 behind Jon Lester. His sinker and four-seamer have contact rates above 85% in his career. When looking at heat maps, Mills locates his sinker and four-seamer to opposite sides of the plate. Meanwhile, he tosses his changeup or swing and miss pitch down or below the zone. If you’re looking for decent ratios with mediocre strikeout rates, then target Mills as a late-round flier.

With this one, I feel less confident, mostly because Adrian Houser uses a fastball-heavy approach that’s mediocre. In 2020, Houser finished with a 5.30 ERA and 1.50 WHIP with a 17.9% strikeout rate and 8.5% walk rate. The ERA explosion likely occurred due to regression in his LOB% with a 61.2% LOB% in 2020 compared to a 76.2% LOB% in 2019. Houser performed relatively well in 2019 and recorded a 3.72 ERA, 1.24 WHIP, 25.3% strikeout rate, and 8% walk rate. That season, Houser started in the bullpen and then started in over half of his appearances. When looking at his splits, he struggled much more as a starter than as a reliever. He didn’t pitch well the second and third time through, yikes.

In 2020, both Houser’s sinker and four-seamer recorded double-digit swinging strike rates. His sinker had a 10.3% swinging-strike rate, and his four-seamer had a 12.8% swinging-strike rate. Although his sinker induced a ton of ground balls with a career 69% groundball rate, the swinging-strike rate jumped from 7.2% in 2019. His sinker caught my eye because it ranked 5th with a -11 run value amongst all pitchers, including relievers. Interestingly, the leaderboard includes three Brewers pitchers ranked inside the top-7 with a negative run value on a specific pitch. The other two Brewers – Devin Williams and his changeup with a -13 run value (No. 3) and Corbin Burnes and his cutter with a -11 run value (No. 7).

Adrian Houser projects at the backend of the Brewers rotation. He’s not an exciting option, but someone that should eat innings with an ERA near 4.50. If he can get his K-BB% (17.3%) close to his 2019 numbers, then he’s a streamable option based on the matchup. The BAT projects Houser for a 4.65 ERA, 1.39 WHIP, a 7.36 K/9, and 3.18 BB/9 in 150 innings. Maybe if he makes a slight pitch mix change where he increases the curveball or changeup usage, we could see better results since both have decent vertical movement. Not everyone can succeed like Lance Lynn with a fastball-heavy approach, but Houser is worth considering in deep leagues. Houser’s also another pitcher using seam-shifted wake to his benefit, and in his case, it’s the sinker.  It’s something to monitor and dive deeper into at a later time.

For you seam-shifted wake heads, Glenn Healey has a must-read article out. It features a table of ‘side force movement leaders’ & it’s a bunch of interesting names benefitting from SSW.
1) Lynn
2) Hendricks
3) Houser
4) McCullers
5) @locatejared
more: https://t.co/KTjb3nrxGn