We’re entering the MLB season’s unofficial second half, which means many fantasy leagues are approaching the home stretch. With that in mind, Danny Duffy, a veteran pitcher I’m not sold has truly escaped an early-season rut, and Chad Pinder is worth an upside play in standard or deeper leagues.

Say this about Duffy: he’s not afraid to make adjustments. After a self-described “awful” start to the season, he’s been better the past few months. He’s allowed opposing hitters only a .293 weighted on-base average since the start of June, sporting a solid 3.65 ERA over that time. After an altered delivery failed to yield improved results, Duffy has revamped his pitch mix as of late. Since 2015, coinciding with Duffy’s two-year run from 2016-2017 as a top-of-the-rotation starter, he’s used a slider as his primary breaking pitch. His most recent adjustment, though, has been to bring back a curveball, which he first started using June 22 against Houston and immediately surpassed his slider as his weapon of choice. 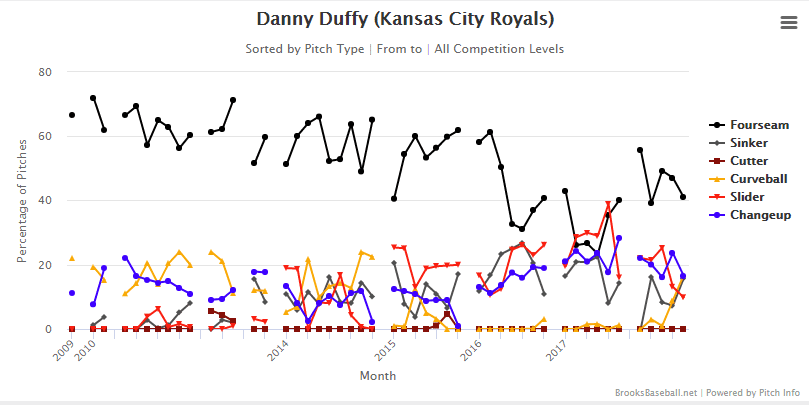 Based upon the results, it would appear to have been a magical decision. While hitters have blasted Duffy’s slider this season- slugging .564 against it- they have only a .147 slugging percentage against his curveball. We know, though, that pitch type results come with all sorts of sample size caveats, so let’s look at Duffy’s new pitch mix on a more granular data.

It’s immediately apparent why, to this point, hitters have seen terrible results on Duffy’s curveball. They’re hitting it on the ground- a lot. Not coincidentally, Duffy’s home run rate is down significantly from where it was earlier in the season. But can he continue to induce grounders at this rate? That seems more doubtful. Duffy’s curve is only average in terms of velocity and spin, both of which correlate strongly with whiffs and ground balls. It doesn’t seem to be about location, either. He’s actually spotted his slider lower, on average, than he has his curve this year, and it doesn’t seem that he’s been particularly fine locating it, either. Maybe the bigger story, then, has not been Duffy’s stuff, but has been the competition that he’s faced. Since he’s gone from the slider to the curve, Duffy has faced Houston, Milwaukee, Cleveland, Minnesota (twice), the White Sox, and Detroit. Excepting Milwaukee, those lineups have been bad this year against curveballs (even Houston, who has arguably MLB’s best lineup, has been miserable this season against benders).

More worrisome has been that Duffy’s command, to which he attributed his early-season struggles in the linked conversation with the Kansas City Star, has remained a problem. He’s issued multiple walks in 20 of his 22 outings this season, and it hasn’t trended positively, either. Even since June, he’s issued multiple walks in every start, although he hasn’t issued more than three in any outing since that June 22 start against Houston. If you’re looking for optimism, you could point to Duffy’s release points, which have trended back upwards after a noticeable downturn at the beginning of the season. Maybe this an indicator that he’s finally finding his mechanics, and he is spotting the ball arm-side more often recently. Command is as tough a skill as there is in baseball to quantify, but the simplest shorthand is to look at walk rate, and Duffy keeps issuing walks. I’d be hesitant to believe that Duffy’s figured out those command woes.

Danny Duffy’s different than the pitcher who was abysmal in April and May. Of that, there’s no question. Indeed, he’s almost certainly better than he was. I’m not sure how much better, though, since his new curveball looks- despite the early results- to be an underwhelming offering. He’s beaten up on relatively weak competition recently, but I’m not sure I’d buy that continuing moving forward. Danny Duffy should be a fascinating player to monitor moving forward- particularly if he gets moved to a contending club- but he’s not a guy I’d be targeting for the stretch run.

Pinder’s unowned in over 80 percent of leagues, but he shouldn’t be. It’s understandable, given that he hasn’t really been staked to an everyday role, but that seems to be changing. While a road interleague series has forced the A’s to give Khris Davis a glove this weekend, Pinder seems to have staked a claim to the left field gig in AL parks, having started four of the preceding five games. That’s good news for astute fantasy owners, because Pinder has raked all season. His .259/.332/.453 line alone makes Pinder worth adding, but his Statcast data suggest there’s more in here. Statcast estimates that Pinder’s been unlucky to “only” be 17 percentage points above average, with an expected batting average of .282 and an expected slugging percentage of .550. He does strike out quite a bit, and Depth Charts forecasts him to slash .242 moving forward, so he’s far from a sure bet, but his batted ball data at least indicates that there’s some power upside.

Most interestingly, Pinder’s been particularly adept at hitting breaking pitches this year, surprising for a player whose strikeout rate would otherwise indicate poor bat control. That might be misleading, though. Pinder has made contact on 77 percent of his swings this season, which is precisely average, more than enough for a player who hits the ball as hard as Pinder does. Consider, for instance, Pinder’s company in hitting breaking balls: Mookie Betts. Manny Machado. Eugenio Suarez. Jose Altuve. Yes, Paul DeJong and Leonys Martin also appear among the top 15, so it’s not a perfect match for the league’s hitting leaderboards, but most of the players this good at hitting breaking pitches are truly elite hitters altogether. I wouldn’t bank on Pinder as the next Eugenio Suarez, but I’d feel comfortable taking the over on his projections. Pinder’s at least worth adding for free in the vast majority of leagues where he currently resides on the waiver wire.