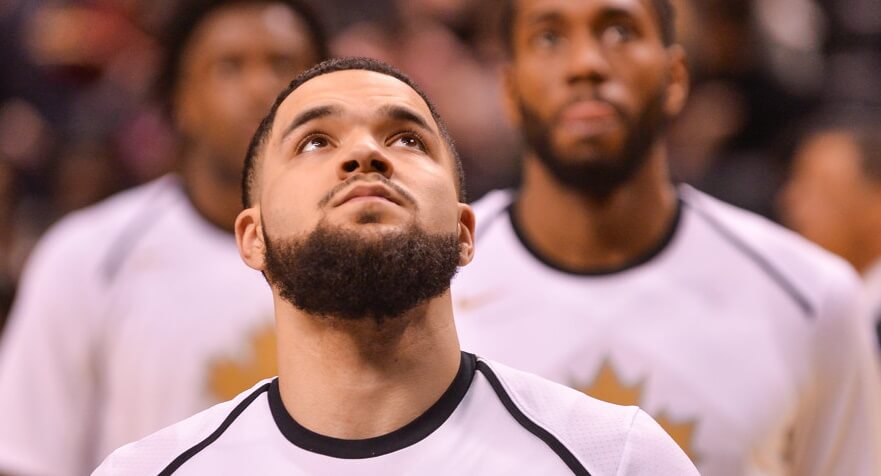 Tonight we’ve got a juicy nine-game slate, which will give us plenty of opportunities for value. Because the tournaments are bigger on Draftkings, I’ll focus on those prices, so be mindful if you’re using Fanduel, Yahoo, or any other competitor, that different prices will also change the attractiveness of each play.

Offensive Rating: 28th vs. 2nd in the league

Defensive Rating: 25th vs. 26th in the league

Predicted Outcome: The Hornets are the better team, by far. The Magic are near league-worst in offense and defense, while the Hornets have an elite offense, and operate at the fastest pace in the league. I’m keying in on the Hornets’ guards heavily in this matchup.

Offensive Rating: 7th vs. 30th in the league

Predicted Outcome: The Raptors are starting to find their footing. They aren’t exactly beating teams down, but they’ll stay competitive against any team now. They shouldn’t have a problem with the Pistons, who are 22 games under .500. I expect the stars to be too much for a rebuilding Detroit squad.

DFS Targets: Frankly, there aren’t any safe options on the Pistons (not even Cade). I like the stars in Toronto. VanVleet and Siakam at $10000 and $9500, respectively.

Offensive Rating: 9th vs. 16th in the league

Defensive Rating: 3rd vs. 19th in the league

Predicted Outcome: Take a gander at these ratings. The Pacers are worse in offense, defense, overall team rating, and play at a slower pace. I’m hard-pressed to find a reason why the Suns would lose to the Pacers tonight.

DFS Targets: The Suns defense wouldn’t lead me to target any Pacers in a slate as large as this, there are simply better options. As for the Suns, your usual suspects of CP3, Booker, and Ayton should be good money ($7900, $8800, and $7600).

Offensive Rating: 21st vs. 14th in the league

Defensive Rating: 5th vs. 10th in the league

Predicted Outcome: This should be a good one. There are a lot of on court and off-court newsworthy notes on both teams. Ben Simmons and Tobias Harris have been heavily involved in trade rumors, and Jaylen Brown and Jayson Tatum have also been connected to making changes in Boston. Wouldn’t be surprised if we get a wonky matchup here, but the Celtics have the better team on paper, in my opinion. I’ll roll with them.

DFS Targets: We’ve got an evenly matched game here. There could be a few optimal players on both teams. Keep your eye on Brown, Tatum, and Embiid, obviously. But there are some mid-tier players I like as well with Seth Curry at $6100, Dennis Schroder if Marcus Smart is ruled out at $5400, and Josh Richardson is getting way too many minutes to fade at $4100.

Offensive Rating: 12th vs 6th in the league

Defensive Rating: 1st vs. 14th in the league

Net Rating: 1st vs. 8th in the league

Predicted Outcome: Excellent matchup. The Warriors are coming off of an embarrassing loss, by their standards against the Bucks last night. I think they’ll come out firing, despite being on the back end of a back-to-back. Further, they’re the best team in the league, with a lockdown defense, when they’re hitting on all cylinders. You usually won’t go wrong backing the best team. Warriors.

DFS Targets: The Warriors defense is too stout for me to take a risk on any expensive Bulls players on a large slate. On the Warriors, expect Steph to bounce back at $10600, a $6200 Wiggins being depended on to get buckets, that same role will be given to Jordan Poole with no Klay. Damien Lee is great value at $3400, especially with no Gary Payton Jr.

Offensive Rating: 4th vs. 5th in the league

Defensive Rating: 28th vs. 7th in the league

Predicted Outcome: No Jimmy, no Bam, no problem. This Miami team is showing why they’re the best franchise in the league at developing young talent, each year. Somebody is always ready to step up and show they are capable of starting on a different team. The Heat have stayed solid in their ratings all year, despite their stars missing time. The Heat are the better team…period.

DFS Targets: Trae Young is pretty matchup proof, but take a look at Heat reserves like Tyler Herro at $7800, Yurtseven is a rebounding machine at $7200, and a $4900 Max Strus is essentially free with his minutes allotment and three point shooting. If Jimmy Butler plays, feel free to fire him up. Also, Kyle Lowry could have a field day with Trae guarding him.

Offensive Rating: 13th vs. 15th in the league

Defensive Rating: 2nd vs. 21st in the league

Predicted Outcome: Cavs. Didn’t think I’d ever get to a point where I believe that the Cavs (sans LeBron) are flat out a great team, but they are. The organization was right to give Altman that extension. They’ve been consistently making great transactions, and judging/developing talent. Spurs aren’t there yet, though they are always competitive.

DFS Targets: Everybody is in play on this one for the Cavs. All of the starters, plus Osman and Kevin Love. I lean towards the bigs on the Cavs, as a result of their pace of play. On the Spurs, I’d just stick with Murray, considering the Cavs have the second best defense in the league.

Offensive Rating: 20th vs. 3rd in the league

Defensive Rating: 6th vs. 12th in the league

Predicted Outcome: I’m sure the Grizzlies will lose again at some point, but I have no reason to think it’ll be against the Mavs. I’m expecting 12 straight tonight.

Offensive Rating: 26th vs. 18th in the league

Defensive Rating: 30th vs. 27th in the league

Predicted Outcome: The Rockets playing anybody is usually where I’d put the opponent in the automatic win, position, but the Kings are their own brand of terrible. I’m going to lean Rockets in this one, because they play at a much faster pace, which will serve them well against a bad defense.

DFS Targets: With these two teams, you can throw defense out of the window. They’ll play fast. They’ll play loose. And both teams will put up a lot of points. All of the starters are in play, and could be in the optimal lineups. You should have heavy weighting toward this game.