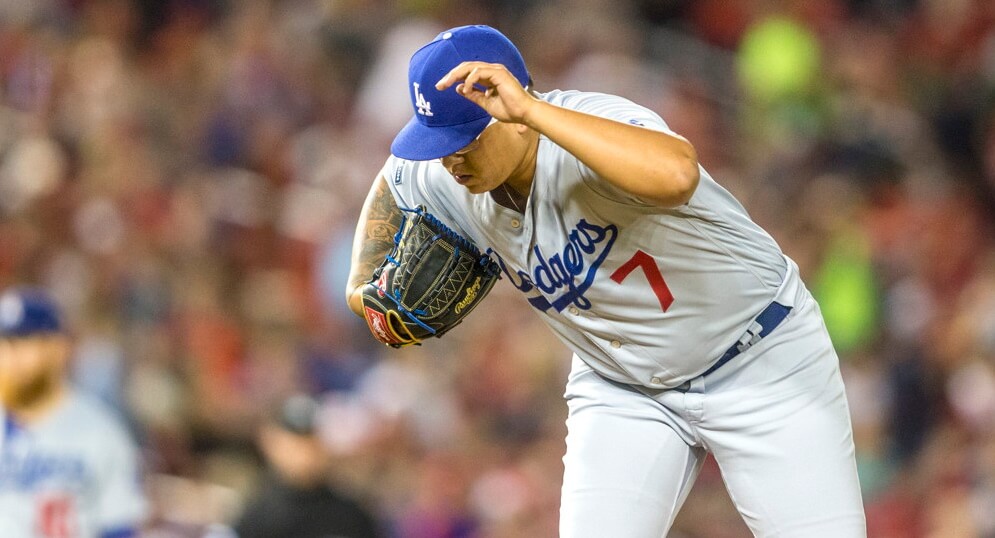 The weekend is approaching and it is full of action as we head into the month of August.  Dose of DFS is here to help the reader maximize their lineups, and identify the top daily fantasy baseball values for each day of the week.  Included for each day will be the best value in three price ranges for pitchers and hitters: high-cost player, medium-cost player, and low-cost player. Below are the price ranges on FanDuel, which will be the platform that is used. There will be a reference made to DraftKings for any significant differences.

There will be a “pivots” note below each section. These will be players to turn to if a highlighted player has a bad weather outlook, is injured, given a day off, has a rotation turn skipped, etc. Finally, this will attempt to focus on players in the projected main slate for each day. FanDuel and DraftKings approach these differently, so I will attempt to include as many “pivots” as possible.

Mr. Icy-Hot himself is once again an excellent play in his second start against the lowly Detroit Tigers. Bauer is coming off a dazzling performance against that same very team last week. He struck out 11 batters in 6.1 innings, and only gave up two hits. Fire up your shares of Trevor Bauer for the Friday slate.

It does not matter who is pitching against the San Francisco Giants, that pitcher should always be considered in your lineup. Mike Minor is the pitcher in line for Saturday. He had a solid outing in his first start, scoring 30 fantasy points. Expect him to outperform that against a poor lineup.

Montgomery draws his first start of the year against the lowly Baltimore Orioles. While their lineup is actually decent, expect Jordan Montgomery to have a solid outing. The oft-injured lefty has a career 3.91 ERA in three seasons. Typically a high ground ball pitcher, expect Montgomery to keep the ball in the park if he has control throughout the game.

Rizzo has been tearing the cover off the ball so far in 2020. He has three home runs in five games played. Going against Trevor Williams of the Pirates on Friday, expect Rizzo to put some hard-hit balls in play. In 14 plate appearances against Williams, Rizzo has two doubles, a .417 batting average, and an .509 xwOBA.

Go ahead and get on board the Eric Hosmer train before it is too late. Hosmer has changed his swing and the results are showing. Always criticized for not elevating the ball enough, Hosmer had a career launch angle below 3-degrees. Through five games this season, he is at 31.2-degrees. He is hitting .500, with a home run, and a 1.583 OPS. While the sample size is too small, I am not avoiding Hosmer in Coors Field.

Yandy Diaz is not off to a good start thus far into the season. However, he gets a left-handed pitcher in a hitter-friendly park on Friday. The opposing pitcher, Tommy Milone, is a changeup heavy pitcher. Yandy Diaz crushes left-handed changeups. Since the 2018 season, Diaz has seen 107 changeups from lefties. He has hit for a .303 average and a .779 OPS against those pitches. He should be on-base a few times in this game, making him a great value.

I don’t care how many innings Tyler Glasnow is expected to pitch. When you are blowing 100-mph fastballs by contact hitters, there are strikeouts aplenty waiting. Just ask Ozzie Albies (video below). If Glasnow is healthy, he is a top five pitcher in baseball. After striking out nine Braves batters in his first outing, expect double digits against the Orioles. Simply put, don’t miss out on Glasnow in your Saturday lineup.

Julio Urias had a good outing in his first start against the Giants, scoring 21 fantasy points in five innings pitched. He did have some control issues, walking three, but he countered that by only giving up five hits. Now that he has his first start out of the way, expect a more in control pitcher. The Diamondbacks are an average lineup who should allow Urias to give you five or six solid innings.

Here we are again. Just pick and choose the opposing pitcher against the Giants. Jordan Lyles is that guy on the Saturday slate. Lyles has changed his pitch mix, throwing his curveball a lot more. It has led to some success, as he has been a sub-4.00 ERA pitcher over the past two seasons. Lyles should be able to get through five innings, with a potential for high strikeout numbers.

Trevor Story or Nolan Arenado are excellent options on Saturday. They face off against left-handed pitcher Joey Lucchesi, and they both abuse any left-handed pitcher that comes into Coors Field. Story has a career 1.122 OPS against lefties in Coors. Arenado has a career 1.180 OPS against in the same circumstances. Get as many shares of the duo as possible.

Manny Machado is not the same hitter that we knew in Baltimore. While he has struggled to get going in San Diego, he is still a lefty-masher. Despite a poor 2019 overall, Machado hit for a .315 average, and a 1.089 OPS against left-handed pitchers. On Saturday, he is in Colorado against a left-handed pitcher. Machado should have a huge game.

Yankee Stadium is perhaps the most right field friendly park in all of baseball. Mitch Moreland is a left-handed hitter who pulls the ball at an extremely high rate. That is a formula for success against Masahiro Tanaka. Left-handed hitters hit for .508 SLG against him in 2019, compared to .393 for righties.

Now heading into his second start of the season, Walker Buehler should be on the verge of being fully stretched out. If he is, Buehler is a fantasy points monster. He did not perform well in his first start, but he went against one of the best lineups in baseball. Now expected to go against the Angels, there is some nice upside. The Angels are a sneaky good lineup, but if Buehler is clicking, it really does not matter the opponent.

News flash: Kyle Gibson is a good pitcher. Gibson has one of the best sliders in baseball. He also has an excellent changeup. He showed the Diamondbacks what he is capable of in his first start, going five innings, giving up zero earned runs, and striking out four. Naturally following our theme, he is pitching against the Giants. Expect Gibson to build on those numbers from his first start, and provide you at least six innings with a quality start.

Adrian Houser has been a sneaky good pitcher for the Brewers. In 132 innings pitched in the majors, he owns a 3.55 ERA, a 23.6% strikeout percentage, and a 9.7% swinging strike rate. Solid numbers for a low cost pitcher. In his first start against the Pittsburgh Pirates, Houser only gave up one hit in five innings pitched. Fire him up against the St. Louis Cardinals as a high-floor, low-cost pitcher.

Fernando Tatis Jr. is one of the most exciting young players in all of baseball. He hits the ball hard, steals bases, and has the pizzazz that has viewers ready for his next highlight play. Playing in Coors will play him up even further. Projected to go against Antonio Senzetela, who is terrible at his home park, Tatis should provide fireworks all game long on Sunday.

Hosmer has already been a pick prior, so there is not much explanation needed. Swing change. Playing in Coors. Going against a bad pitcher.

The mountain of a man is as good against left-handed pitchers as most anyone in baseball. In his career, he has hit for a .331 average, with a .984 OPS against left-handed opponents. Hitting int he middle of a good lineup, against lefty Tommy Milone, Martinez is an excellent play across all lineup builds.