We’re having a little break from the usual articles in order to take a deep dive into one of Fantrax’s biggest selling points: customized scoring systems.

For those of you who know all the in’s and out’s (probably the Commissioners of their leagues), some of this will be Fantrax 101. But for the rest, it should hopefully demonstrate the capabilities of Fantrax, and maybe even generate a bit of discussion in the group chat as you prepare for next season (yes, it’s never too early to plan ahead!). Indeed, it was only this week that the Chaps were asked about the very subject on Twitter…don’t worry PhilOfSports, I got you.

Where we are concerned – at least for this article – is in league setup. Here is where the scoring system is decided. By my reckoning, there are 82 unique scoring categories for goalkeepers, and 122 unique scoring categories for outfielders…and that’s not including the option of using ranges and bonuses for even greater variation. Add in that potential and you have literally (and that’s used correctly, not in the incorrect metaphorical way that it has become known) hundreds of thousands of possible scoring systems to choose from. The world is your oyster. What do you want to do?

The beauty of Fantrax scoring – formerly Togga scoring (God rests its soul) – is in its nuance. Whilst success in OFPL comes down to the big categories (goals, assists, clean sheets, and discipline) as well as some contrived scoring (see: captaincy, bench boosts, free hits, etc.), success in Fantrax is more sophisticated. It can involve some of the “smaller” stats that take place on the pitch that contribute to player – and therefore team – performance. Shots, dribbles, crosses, aerials, tackles, and interceptions are some common ones, but the list – as mentioned before – is very long. I won’t list them all here, but given that the main point of this article is to educate and given that most people won’t have commissioner access to see these categories, I have listed a collection of the ones I like at the foot of this article.

As mentioned at the start of this piece, the Chaps were asked about scoring on Twitter recently. Specifically, they were asked how to boost the scoring/value of central defenders and defensive midfielders. As it happens, this is something that we aimed to do in my own league. And I think it has been successful. Let’s take a look.

We didn’t want to tinker too much with Fantrax scoring – it’s pretty damn good as it is! – but like PhilOfSports, we also wanted to make those defensive positions a bit more valuable. After all, titles are won on the back of the likes of Virgil van Dijk and N’Golo Kante – why should they miss out on the fantasy fun?? So here’s the changes that we made… 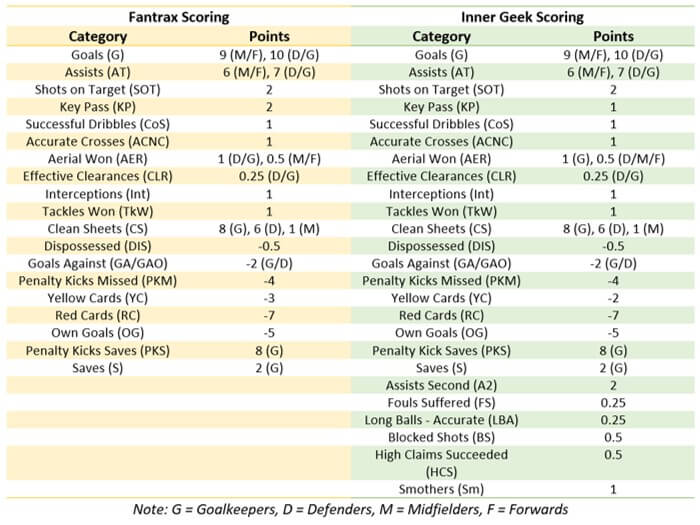 In total, there are nine differences between Fantrax Scoring and Inner Geek Scoring. Inner Geek scoring reduces the punishment of a yellow card from -3 to -2. Yellow cards are not the end of the world, and it seems odd to punish a player so harshly – almost as harshly as missing a penalty! – for something like this. Two, perhaps more controversial, changes are reducing key passes to 1 and aerials for defenders to 0.5. DrafterThoughts has done a lot of great work demonstrating that these two stats in their current guise have a huge and disproportionate impact on scoring, and reducing them helps to combat this. There’s nothing worse than seeing your opponent’s defender pass a simple ball into a midfielder, that midfielder shooting miles wide from 40 yards, and yet somehow the defender gets two points for it!!

The remaining six changes come in the form of additional categories. Second assists are the integral pass that is received by the person that gets the assist. They are relatively rare according to the stats, and the exact definition Opta uses is unclear, but anyone who’s watched a game of football will know that when these passes occur, they should be rewarded! DrafterThoughts (who else!) has a nice article about them here. Fouls suffered – sometimes referred to as the Grealish-cheat-code (though we will see soon that this is not necessarily the case) – is another warranted category. Free kicks create opportunities to attack, and it makes sense to reward those that earn them. They also help bolster the value of creative players who have seen their key pass points reduced.

Inner Geek Scoring aims to increase the value of central defenders and defensive midfielders, and it is in the introduction of accurate long balls and blocked shots where this comes to fruition. Whilst the reduction in aerials won partially negates this, we will see later that the overall balance between the positions is improved. Finally, the new scoring system also leads to a slight boost for goalkeepers. Yes – goalkeepers are people too! Gone are the days of not drafting a goalkeeper. It is now worthwhile spending a 10th round pick on them (we didn’t want to get too crazy and make it any higher) given that they get points for successful high claims (i.e. crosses) and smothers.

Some of these changes may not appeal to you – and that’s fine. There are a couple of nice categories that I’ve seen adopted elsewhere that aren’t in IG Scoring which you may prefer (these are ‘Penalties Earned’ and ‘Goals Against Outfielders > only after the first goal’). Whatever the case, the fact that you can customize your scoring system is what is so great. But if it helps, here’s a bit of an analysis I carried out to assess the new scoring system. Inner Geek by name, Inner Geek by nature…

…at least according to WhoScored ratings anyway! WhoScored is not faultless by any means, but its one of the few places that attempts to give a rating to a player’s performance in each match. This rating is out of 10, and by correlating a player’s average WhoScored rating for the season with their FP/G for the season, we can get an idea of how accurately these match up. In other words, does Inner Geek Scoring reflect the performances of players this season? 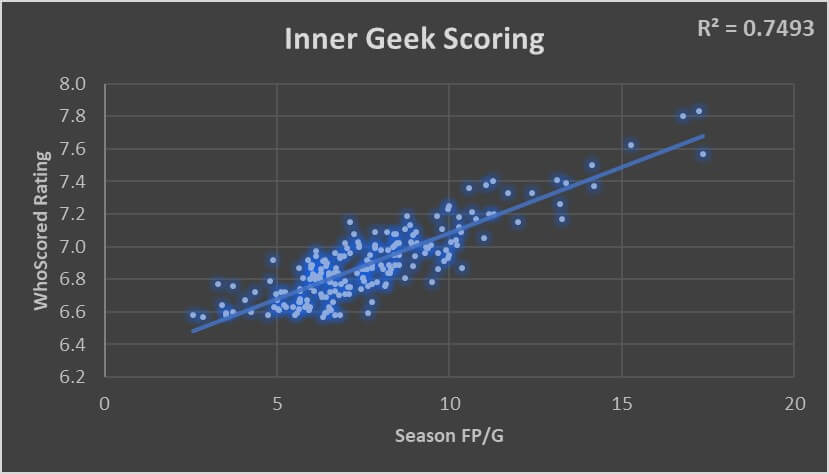 The graph above shows this correlation. For comparison’s sake, the same graph but using Fantrax scoring is below. We can see that both correlate exceptionally with WhoScored ratings (woo-hoo!) but that Inner Geek scoring is marginally better. 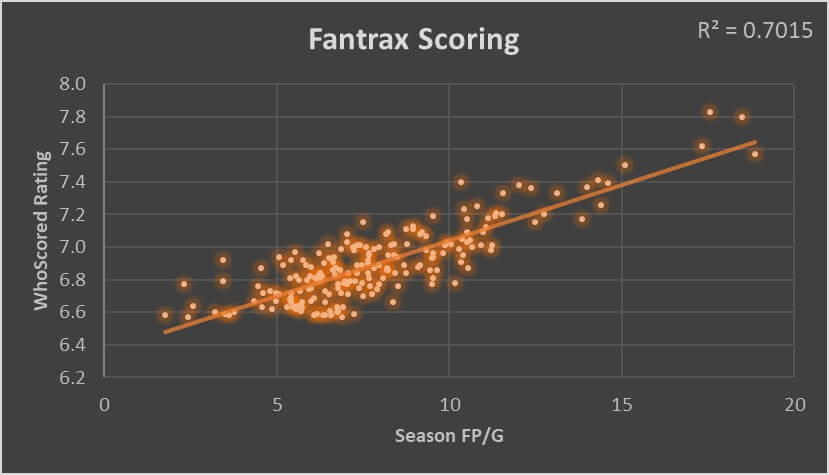 You would be right in thinking that season-long ratings are one thing, what about individual game performances? It is just as important – arguably even more important – that the scoring system reflects performance on a match-by-match basis. Don’t worry, I’ve covered that too. Below is the correlation between Inner Geek scoring and match performance, as determined by WhoScored, during gameweek 23 of this season only. Again, Fantrax scoring is also included for comparison. 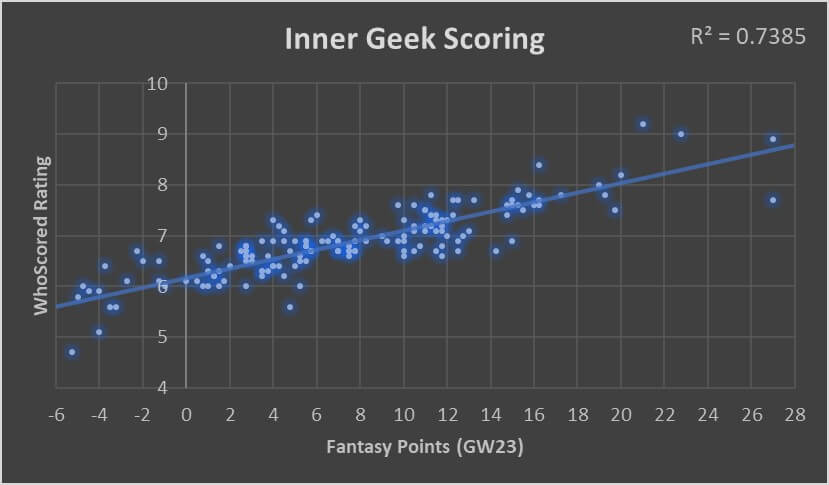 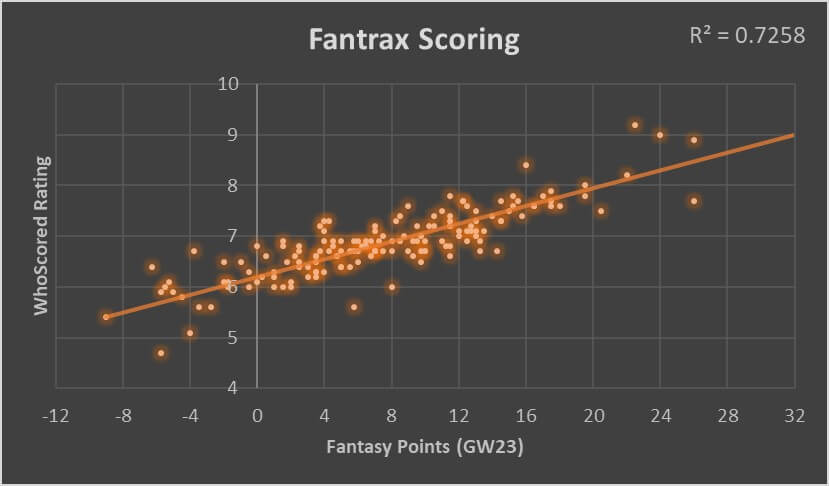 Both scoring systems again reflect real-world performance excellently. So far, so good. Of further interest is that the standard deviation in scores is smaller for Inner Geek scoring compared to Fantrax scoring. This would likely lead to closer matchups in your fantasy league, so if that’s what you want, then there is an added bonus.

The Winners and Losers

The final part of this example customization is to talk about the players that have lost and gained value with Inner Geek scoring. This brings us back, once again, to PhilOfSports initial question about making center backs and defensive midfielders more important. Did it work? Below are the 20 biggest “losers” and 20 biggest “winners” from the new scoring system (minimum 10 league games started). 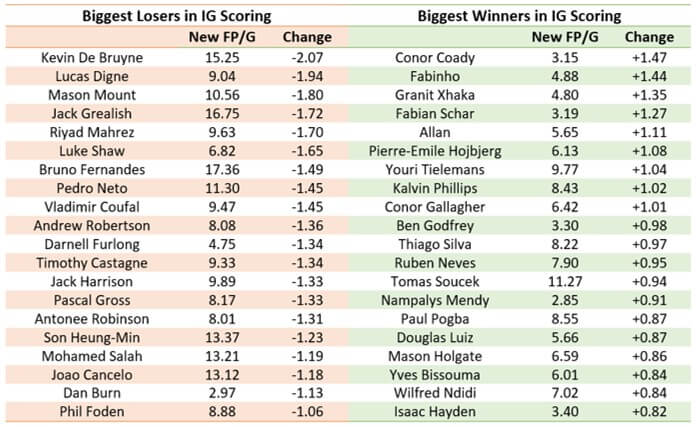 I think it’s safe to say from the table above, that the scoring system did what it set out to do. Incredibly, you could probably argue the case that all 20 “winners” are either center backs, defensive midfielders, or at least, deeper lying midfielders. Granted, many still remain irrelevant in fantasy (see: Coady, Schar, Mendy), but it seems a step in the right direction. And on the other side of the coin; yes, we see some big names drop slightly, but it’s important to put these decreases into context by looking at their FP/G’s. Bruno Fernandes, Grealish*, and De Bruyne all remain (along with Kane) the best players in the game – as they rightly should. And the others below still maintain very healthy FP/G’s that make the exciting players in real life, still the exciting players in fantasy football.

*Fouls suffered don’t make him a cheat code in this version!

Whether you want to boost the value of a defensive midfielder, a center back, or a goalkeeper is beside the point. The important thing is that with Fantrax, it is possible. This ability to customize scoring allows your league to make decisions for itself, and I think this is a major advantage. Fantrax scoring is the best default scoring system in fantasy football in my opinion, and it’s fantastic having a default system that the majority know so that conversations in the community are played out within the same general boundaries. But slight tweaks – such as those demonstrated with IG Scoring – don’t change that, they just allow people to play the game the way that they think is best.

Just some of the possible scoring categories available in Fantrax