If you’ve played in a dynasty league over the past five years, you know the hype has always been real on Javier Baez. As a prospect, the dynasty community would swoon over his potential. “30/30!” they shouted. “40/40!” they gushed. Much underwear was sullied. Such potential rarely comes to fruition, but you could see where they were coming from. After all, he went 37/20 in 2013 between High-A and Double-A when he was 20, and 32/21 in 2014 between Triple-A and the majors as a 21-year-old. However, the majors can humble you in a hurry, and the hype train has steadily slowed down since his debut in 2014.

During said debut, Baez managed just a 54 wRC+ over 52 games while striking out 41.5% of his plate appearances. He was still just 21, as I mentioned, so, really, it would have been more of a surprise if he didn’t struggle. He then battled injuries in 2015, spending just 28 games with the Cubs but improving his wRC+ to 97 and cutting his strikeout rate to 30%. 2016 marked his first full season in the majors, seeing 142 games of action while playing all over the diamond defensively. He took a seat against right-handers a fair bit, though, cashing in only 450 plate appearances. He further improved his K% to 24%, which is bonafide good considering how hard he swings. His wRC+ stayed relatively steady at 94, and he went 14/12 with a .273 batting average. Not bad for a 23-year-old.

Baez was set free a lot more in 2017, upping his plate appearances against righties from 314 to 375. It was at the same time both a good thing and a bad thing for his fantasy value. On the good side, he increased his homer total by seven to 23, and his R+RBI by 41. He also managed to hit for the exact same average as the year prior (.273). The bad? His strikeout rate shot back up to 28.3%, and his contact rate was the second-worst in all of baseball at just 65.8%. So let’s look into these numbers a little more, and try to figure out what we can expect from Baez in 2018.

First, let’s break down Baez’s left/righty splits because they are pronounced. He has a career .356 wOBA against left-handed pitching, with a 36% hard-contact rate that was even higher in 2017 at 40%. He has always had success against lefties, and there is no reason to believe that will change anytime soon. Unfortunately, most pitchers are right-handed, and it’s against them that Baez really struggles. His career wOBA against righties is a meager .289, with a below average 29% hard-contact rate. Thanks to his plus speed, he has still managed a .321 BABIP. However, his 0.14 BB/K is … gross. Unfortunately, despite consistent year-over-year improvement in wOBA, there aren’t many underlying numbers to tell us that he’s making any great strides. Baez’s strikeout rate looked to be improving, but it took a step back last year. His hard-contact rate has remained steadily below average, and his groundball rate actually reached a career high in 2017, jumping to 50.4%. You can’t hit for power when you’re hitting the ball on the ground.

Baez’s plate discipline needs serious work if he’s going to reach his offensive potential. His aforementioned contact rate is downright frightening, with only a handful of MLB regulars able to find offensive success making such little contact. If you’re going to whiff 18.6% of the time (second worst rate in MLB) you need to show prodigious power, which Baez owns but has yet to tap into. His 45.1% reach rate was second-highest in MLB, so he has shown very little ability to lay off pitches out of the zone, especially balls low and away. A quick look at his zone profile shows us that pitchers have developed a pretty clear plan of attack to dispatch Baez. 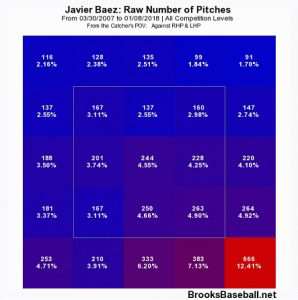 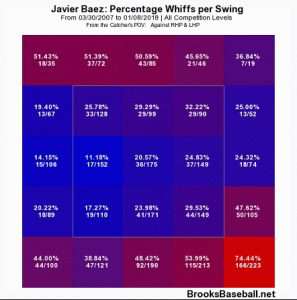 However, there are reasons for optimism with Baez. For one, his defense. Fantasy-wise, we don’t care about defense too much, but in this case, it helps us for a couple of reasons. Not only is he able to play several positions and give us multi-position eligibility, but it can also give him a few extra trips to the dish over the year as a late-game defensive replacement. Also, while his speed helps him defensively, it also helps us in the form of stolen bases. He has stolen double-digit bases in each of his two full MLB seasons, and, at just 25 years old, he shouldn’t be slowing down anytime soon.

There’s also the power, which is very real. Baez needs to make more contact to fully tap into it, but his ISO reached a career-high .207 in 2017 and should only continue to rise as he grows into more power and adjusts to how pitchers are attacking him. If he can make more consistent hard contact this year, that will also help him finally justify his career .332 BABIP (.345 in 2017). Baez managed a .252 BABIP on soft and medium hit groundballs in 2017, where the MLB average was just .176. That’s likely to come down for him, and take his batting average with it.

Baez will also continue to hit at the bottom of the lineup most days, thus limiting his R+RBI potential. It all adds up to a 2018 projection similar to his 2017 line, albeit with the potential for more power and a few ticks off the batting average. If I’m being transparent, though, I’m hesitant to put a cap on his potential. Baez is one of those electric players whose potential is easy to see, and it’s just a matter of time before he puts it all together. This will be his third full season, and he’s going to be coming up on 1500 plate appearances, both of which are milestones that are often considered breakout territory for young players. His current Fantrax ADP is 125 overall, the 11th second baseman off the board. While there are others behind him I’d be more than happy to fall back on (hello, Ozzie Albies), it’s not a bad price considering his upside.