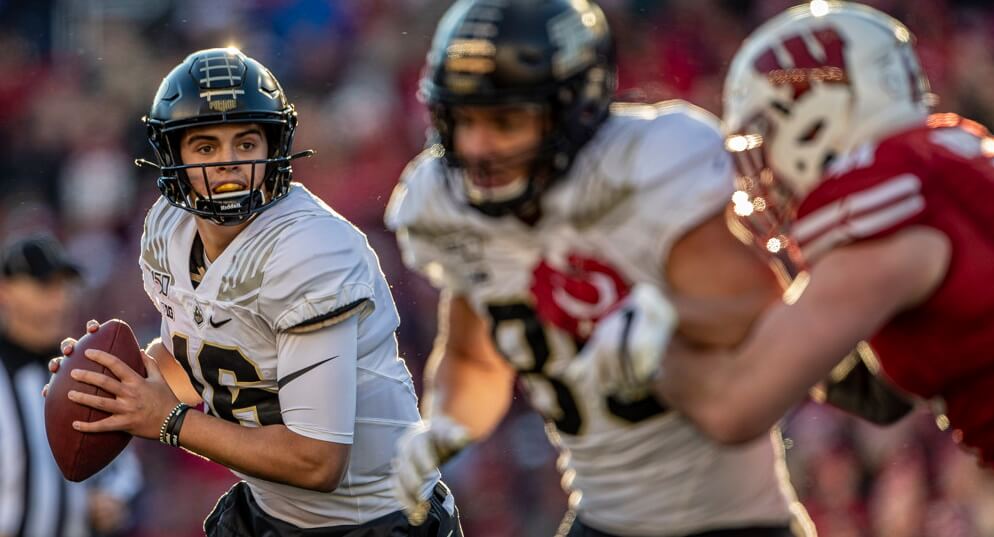 When Purdue starter Elijah Sindelar got hurt last season, Jack Plummer was called upon to helm HC Jeff Brohm’s prolific passing offense. Despite a 420-yard showing in a victory over a listless Maryland team, Plummer’s tenure as a starter was marred by turnovers and losses. Before he suffered a season-ending ankle injury, Plummer had been replaced the game before he was out for the year due to his inefficiency.

Once Aidan O’Connell took over the starting quarterback position, the Boilermaker offense started looking like the well-oiled machine we’ve been accustomed to. He only started three games, but in each contest, he showed demonstrable improvement. In his first game against Northwestern, he led Purdue to a 24-22 victory, completing 34 of 50 passes for 271 yards and a 2:2 TD:INT ratio.

He followed that up by throwing for 289 yards and a 2:1 TD:INT ratio, cutting down on his interceptions, improving his passing yardage, and leading Purdue to a respectable 45-24 loss against a far superior Wisconsin team. However, it was in the Boilermakers final game against Indiana where he put it all together, passing for a career-high 408 yards and a 3:1 TD:INT ratio in a narrow 44-41 loss to in-state rival Indiana.

Purdue has the pleasure of playing Illinois this Saturday and draws Indiana as their cross-division opponent, dodging Michigan, Penn State, and Ohio State from the Big Ten East. O’Connell is a high-ceiling flier in leagues of all sizes. Grab him on your college fantasy football waiver wire now if you can.

For over 40 years, I have watched college football, and I never saw a Badgers’ quarterback—not even Russell Wilson—light up the opposition like Graham Mertz on Friday night. He broke a program passing record for completion percentage (95% on 20 of 21 throws), and tied a school mark with five touchdowns. I still shudder at his extraordinary performance, accuracy and efficiency.

In Wisconsin’s 45-7 victory over Illinois, Mertz completed 14 of 14 passes in the first half and passed for 248 yards in the game. “I thought he had good poise. I thought he saw the field well. You never know how someone is going to react in their first start but I thought he was himself.” coach Paul Chryst stated after the game (msn.com).

Last year, Mertz only played in two games and completed 9 of 10 passes for 73 yards. On Friday, the redshirt freshman started the first game in his career, replacing QB Jack Coan who missed the contest with an injured foot and made the most of the opportunity.

In high school, 247Sports, ESPN, and Rivals all rated Mertz as a four-star prospect. He participated in the Elite 11 quarterback competition and was selected for The Opening Finals. In Kansas, Mertz earned the 2018 Gatorade Player of the Year after completing 62% of his passes for 3,684 yards and 45 touchdowns. He also added 455 rushing yards and five touchdowns on the ground.

At 6’3” and 210-pounds, Mertz is a classic pro-style gunslinger with a big arm and commanding pocket presence. I cannot remember the last time that I recommended a Badgers’ quarterback in college fantasy football, but there are always exceptions to the norm. Mertz should not remain on the waiver wire any longer in CFF leagues.

After publishing this week’s Waiver Wire Gemstones, Wisconsin announced that Graham Mertz tested positive for COVID-19 and be ineligible to play for 21 days according to Big Ten protocols. He would be eligible to return on November 21 at Northwestern.

Other than Justin Fields, identify the most impressive quarterback in the Big Ten over the weekend:

“I am going Aiden O’Connell. I think he will be a part of a pass-first offense and will get another weapon to use next week.” @aceholesrule

I am always impressed when any person evolves and changes in life. In football, good coaches constantly adjust and willingly change according to personal and the opponent.

Tulsa coach Philip Montgomery moved up the coaching ranks as an innovative offensive mind. From 2008-14, he guided, and influenced, some of the most explosive units in college football history at Baylor. Hired by Tulsa, he immediately turned around the Golden Hurricanes’ offense.

In 2020, Montgomery has successfully navigated a tumultuous campaign on campus and transformed the team to a run-orientated, ground attack with a hard-hitting defense. In three games, the Golden Hurricanes have slowed down both high-flying aerial attacks Oklahoma State and UCF. Tulsa has surrendered only 18.3 points per game.

Before the Oklahoma State game, it became publicly known that starting RB Shamari Brooks was lost for the season. In the backfield since, Deneric Prince has ascended to the top of the pecking order. He leads the team in attempts (37) and rushing yards (232). The sophomore runner has scored twice and averaged 6.3 yards per carry.

In high school, he was a three-star recruit and ranked as a Texas Top-150 as a prep senior. At 6’1” and 214-pounds, Prince sat out the 2018 season and transferred from Texas A&M to Tulsa. He has taken advantage of his new setting and is moving up running back rankings in college fantasy football in 2020.

In the Big Ten, who are you targeting at running back on the waiver wire this week?

“Devyn Ford could give you Journey Brown production. I think he has a very high floor.” @aceholesrule

At all levels of football, coaches covet speed, and at times, track and field athletes move over to the gridiron to play wide receiver. One of the first big-time runners to convert, and shine, was Bob Hayes of the Dallas Cowboys in the Sixties.

Two decades later, Johnny “Lam” Jones, Jets, Renaldo Nehemiah, 49ers and Willie Gault, Bears all played in the NFL after excelling as sprinters. At Memphis, Calvin Austin, III has successfully migrated over to the gridiron from the track.

In high school, Austin was a track and field standout and nine-time state champion in sprints and relays. He also established five school records and was a seven-time TSWA All-State honoree.

At Memphis, Austin has run track for three seasons. In 2019, he was named Second Team All-American (4x100m relay) and finished seventh in the 60-meters and sixth in the 200-meters at the American Athletic Conference Championships.

“We were lucky enough that he chose to come here because I think the dynamic he provides for us is great. As he develops as a football player, I think he’s going to add that component as well. He’s got an incredible amount of talent. It’s just hard to say exactly how good he could be…he’s gifted, very gifted,” Memphis track and field coach Kevin Robinson stated in the summer of 2019 (dailymemphian.com).

When Damonte Coxie decided not to return to the Tigers before the UCF game, Austin willing took the baton and sprinted down field with it. In two games, the speedster has secured 15 passes for 335 yards and three touchdowns while averaging 22.3 ypc. Sprint to your waiver wire and place a bid for Austin this week.

In the wake of mega-star Jaylen Waddle’s devastating ankle injury, John Metchie proved he is more than capable of assuming the co-number one role alongside Devonta Smith, as he proceeded to reel in seven of his eight targets for 151 yards against Tennessee.

His trajectory to a feature role closely follows the path of Devonta Smith himself, who entered 2019 as the Alabama number three wideout and promptly overshadowed the more heralded receivers Jerry Jeudy and Henry Ruggs. Looking beyond the stat sheet, Metchie has secured 81% of his targets while averaging 24 ypc. and sporting a pristine 157.2 passer rating when targeted with only one drop in 22-catch opportunities.

Metchie should be owned in every league imaginable since he is going to be a force of nature down the stretch, as Alabama has premium matchups against Mississippi State and LSU on tap the next two weeks.

In the Big Ten, who are you targeting at wide receiver on the waiver wire this week?

“Jahan Dotson showed off his skills and will only get better as the season moves forward.” @aceholesrule

“Why not grab Ronnie Bell? He had 150 yards versus Michigan State last year, which happens to be Michigan’s opponent this week. MSU gave up 38 to Rutgers!” @RJsFantasyFB

You can also check the Week 8 College Fantasy Football Waiver Wire to see if any of those players are still available.