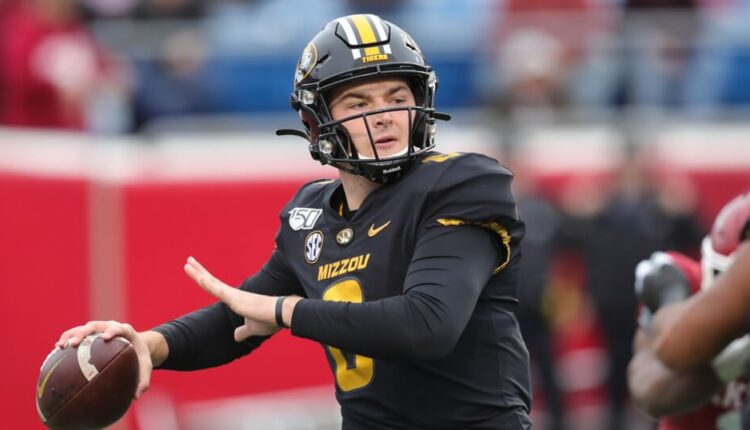 After nearly two decades watching the Big 12 post pinball-type passing stats, SEC teams have finally joined their brethren to the west and implemented high-flying aerial assaults. The LSU-Missouri and Mississippi-Alabama contests combined for 197 points and produced a plethora of fantasy points and stars. With all of the offensive fireworks down south, CFF Diehards must comb the waiver wire and upgrade the depth on their rosters. Eric Froton and I identify the top players to acquire for the rest of the season.

Looking at the matchup before kickoff on Saturday, very few fans would have predicted a breakout performance for Missouri quarterback Connor Bazelak. The redshirt freshman did not enjoy the services of the Tigers’ two starting wide receivers, who missed the game due to Covid-19, and were 20-point underdogs against the defending National Champions. Could Missouri stay competitive?

Not only did Mizzou remain in the contest, Bazelak steered Missouri to an impressive 45-41 conquest. A shootout unfolded as Bazelak posted a higher QBR rating (92.4 to 67.8) than LSU counterpart Myles Brennan. He completed 29 of 34 passes for 406 yards and four touchdowns.

“(Bazelak) wasn’t rattled by the fact that he’s getting pressure. He prepares the right way. He knows exactly what to look for on any situation. He’s got great decision-making ability. Plays broke down, he knows how to throw it away…He’s accurate with the football,” coach Eli Drinkwitz stated after the upset victory over LSU (columbiatribune.com).

At 6’3” and 220-pounds, the Dayton, Ohio product earned a four-star rating by ESPN in the 2019 recruiting class. In high school, he played in a wishbone scheme: He compiled a 13:2 TD:INT ratio and passed for over 1,500 yards as a senior. He enrolled at Missouri to play in a pro-style offense, and for the program’s ability to develop NFL prospects behind center.

Last year, he started the final game of the campaign against Arkansas but endured a torn ACL. During quarantine, Bazelak rehabbed at home. He recovered and competed during training camp for the job, starting his first game of the year on Saturday.

Coach Drinkwitz wants to pressure opposing defenses, and Bazelak appears to be the man in Columbus, MO capable of leading the scheme. It is music to the ears of CFF diehards like myself. Bazelak is a must pick up in CFF Dynasty and keeper leagues and an advisable acquisition in redraft ones.

During the Addazio era, running backs were the only college fantasy viable options on the entire Boston College roster. His antiquated four-yards and a cloud of dust approach relied heavily on a bell-cow running back while the quarterbacks in this system were relegated to chucking deep balls down the sidelines when opposing defenses stacked the box or checking down to sure-handed tight ends on third-and-five.

However, soon upon the staff’s arrival, they landed Notre Dame transfer and former top-five, dual-threat quarterback prospect from the 2018 prep class, Phil Jurkovec. The blue-chip signal-caller had grown weary of waiting his turn behind current Notre Dame starter Ian Book and headed east to their Catholic rival.

Jurkovec threw for 300 yards while completing 74% of his passes with a 2:1 TD:INT ratio in a 26-6 opening week victory over Duke. The Eagles currently stand with a 3-1 record in what was thought to be a rebuilding year. For his part the highly-touted signal-caller has posted three-of-four games of 300-plus yards while throwing for an 8:2 TD:INT ratio to go with three rushing touchdowns. Against a stout Pitt defense this weekend, Jurkovec led BC to a dramatic 31-30 overtime victory while passing for 358 yards and three touchdowns with another score on the ground.

It’s clear that offensive coordinator Cignetti, Jr. wants the offense to flow through the quarterback, as opposed to Addazio who preferred a steady dose of A.J. Dillon with the occasional play-action deep shot. Jurkovec is being given the keys of a potentially potent Boston College offensive scheme that is built around his skill set. His ownership rate of 43% is unacceptable as he should be owned in every format imaginable.

Quarterbacks are always in demand in college fantasy football. Who is the most interesting waiver wire acquisition in CFF this week?

With Kavosiey Smoke expected to be on the shelf for the next few weeks, the Kentucky backfield situation has boiled down to a time-share between Asim Rose and Christopher Rodriguez. The powerfully built 5’11” and 224-pound tailback didn’t make an impact in his first game against Auburn; however, in their Week 2 42-41 OT loss to Ole Miss, Rodriguez came alive with 17 carries for 133 yards and two touchdowns.

This strong performance is the continuation of a trend dating back to last season, as CRod scored a touchdown in each of Kentucky’s last four games of the 2019 season while going for at least 125-plus yards twice in that span. The problem for Rodriguez was opportunity, as he only averaged nine carries per game in the aforementioned final four games of last year.

This week against Mississippi State in a game where Kentucky gained only 157 yards of total offense despite winning 24-2, Rodriguez split carries with Rose rushing seven times for 38 yards and the team’s lone rushing TD. For his part, Rose carried eight times for only 22 yards. Right now, Rodriguez is clearly out-performing Rose and should be in line for a workload boost over the next few weeks with Smoke incapacitated.

Kentucky’s offense will perform much better offensively than they did against MSU. If Rodriquez is available in your league, snap him up if you have the roster space to stash him and play matchups with the talented sophomore, who is only owned in 16% of leagues.

On Saturday at noon, I sat down in front of my TV with a Big Cranky (Double IPA by Stony Creek Brewery) and a tray of nachos, eagerly anticipating the Longhorns and Sooners game. The Red River Showdown once again provided more than enough fireworks. In the four OT thriller, quarterbacks, Sam Ehlinger and Spencer Rattler, put on a performance for the ages, combining for 659 total yards and 10 touchdowns.

When Oklahoma hired former NFL rushing leader Demarco Murray as running backs coach last winter, Pledger was listed as the fourth-stringer in the backfield. Since then, the locker room and depth chart have changed dramatically for a variety of reasons.

Pledger waited and embraced the opportunity when presented. The 5’9” and 193-pounder earned his first start against Kansas State. A couple of hours before the Texas game on Saturday, it was announced that Seth McGowan would not suit up, setting the stage for the upperclassman to shine and model excellence.

“I’ve seen myself take on that role, being the oldest guy out there right now and trying to lead by example…and just come out there every day on the practice field and continue to work hard and keep them young guys going. Coach (DeMarco) Murray has definitely made it an easy transition,” Pledger stated earlier in the season (tulsaworld.com).

The Sooners’ backfield is crowded with Pledger, McGowan and Marcus Major. Yet after four games, Pledger leads the team in attempts (46), rushing yards (219) and has added seven receptions for 78 yards. He also crossed the finish line twice. I am always interested in a ball carrier in a high-scoring offense, and Pledger deserves a roster spot on CFF teams.

Unfortunately, RB Najee Harris can only be rostered on one CFF team in each league: Who Ya Got this week on the waiver wire in the backfield?

In the pre-season, I wrote a piece on Fantrax detailing which high-volume passing offenses fuel the most 100-target wide receivers. Arkansas State was a program I focused a great deal of column space on, as they were one of only two programs to supply 100-plus targets to three different receivers last year (Hawaii was the other).

With All-American starting X-receiver Omar Bayless and electric starting slot receiver Kirk Merritt graduating, starting Z-WR Jonathan Adams Jr. slid over to the X-spot leaving Dahu Green to occupy his vacated position. The towering 6’5” and 197-pound wideout has excelled in his new starting role, catching at least five passes in each of his three appearances and averaging 82 receiving yards and a touchdown so far in 2020.

On Saturday, he tore up Central Arkansas with six catches for 94 yards and two touchdowns as their smaller boundary corners were no match for the imposing Green. Arkansas State is done with their off-conference opponents like Kansas State and Memphis and now enter their fantasy-friendly Sun Belt slate.

Green should be picked up in all leagues where receivers are at a premium as he enters the second half of the CFF regular season. 10% ownership is simply too low for a top receiver in coach Blake Anderson’s passing attack that produced 312 yards per game in 2019.

Over the past five seasons, the Cyclones have quietly provided productive wide receivers—Allen Lazard (2016-17) and Hakeem Butler (2018)—in college fantasy football. Unfortunately, CFF fanatics did not reap fantasy points from the receiver position last year on the Iowa State campus.

In 2020, Xavier Hutchinson has risen to the top of the pecking order in the Cyclones’ aerial assault. After four games, the junior leads the team in catches (20) and yards (229).

“What I love about Xavier is not only does he have great talent, but I think he has an elite work ethic. To me, those are the players I really like to coach,” coach Matt Campbell stated after the victory over Texas Tech (iowastatedaily.com).

A JUCO transfer from Blinn College, Hutchinson, 6’3” and 207-pounds, selected Iowa State over Oklahoma, Nebraska, and Syracuse after being selected First Team All-Conference. As a sophomore in 2019, he tallied 47 catches for 652 yards and five touchdowns for the Buccaneers.

I am placing FAB bids in my CFF leagues this week for Hutchinson. Sharp CFF zealots will also.

A few tight ends impacted passing games in college football yesterday: Who Ya Got on the waiver wire?

If you found John’s College Fantasy Football Waiver Wire helpful, then you’ll definitely want to check out all of our CFF content and follow John Laub on Twitter!