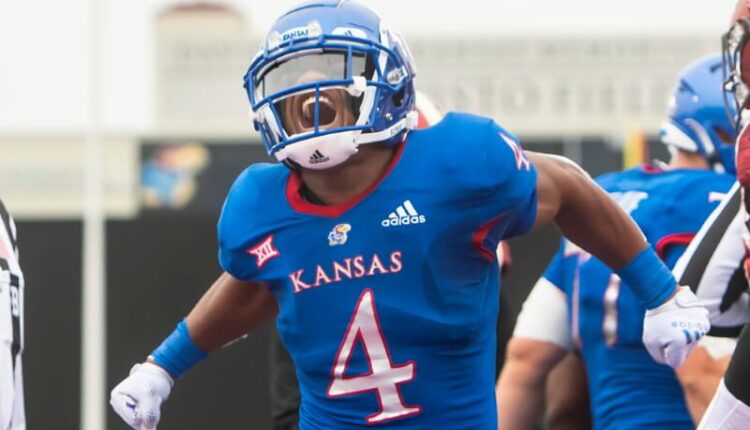 In full disclosure, I made the playoffs in five of eight College Fantasy Football leagues and look forward to an exciting postseason over the next two weeks. Looking back at my successful teams, there is no doubt in my mind that the waiver wire contributed heavily to the success. I acquired Kenneth Walker, Sean Tucker, Rasheed Ali, Will Rogers, Sam Hartman, Deven Thompkins, Jameson Williams, and A.T. Perry on the waiver wire and all became weekly starters on my playoff squads.

JD Yonke, @YonkersCFB, and I have featured the top waiver players available all season and hope that you have enjoyed the insight and knowledge. Once again, we are back to help you bring home a championship ring. We have identified the players to target on the college fantasy football waiver wire to provide a needed boost to your starting lineup in the playoffs.

You know you’re desperate if you’re considering an Akron quarterback in the championship rounds of CFF leagues. While I can’t recommend playing Gibson with confidence if you’re in a top-4 playoff spot, he’s one of the best streaming options at the quarterback position this week if you’re in a consolation bracket or just looking to pick up one more win before the season ends.

How exactly did we end up mentioning an Akron quarterback in this column? The matchup is perfect—Gibson faces a very, very forgiving Kent State defense on Saturday and could put up some big CFF numbers. Kent State sports the 128th ranked passing defense in the nation, surrendering 297.9 yards per game through the air. The Golden Flashes have allowed each of their last four opponents to throw for either 300-plus yards or three touchdowns, so Gibson appears to be the next beneficiary of their soft secondary.

While Akron’s offense still isn’t a world-beater, it has shown notable signs of improvement in 2021. The Zips scored 40 points against Western Michigan in a narrow defeat last week. With a pair of dangerous targets (Konata Mumpfield and Michael Mathison) to throw to, it would be a surprise if Gibson doesn’t produce for CFF managers brave enough to stream him this Saturday. He’s available in just about every (sane) league, with just a 1% ownership on Fantrax.

I am old enough to remember watching Heisman winner Doug Flutie and first-rounder Matt Ryan fling the football all over Alumni Stadium at Boston College. Over the past two seasons, Phil Jurkovec has etched his name among the all-time great Eagles’ signal-callers.

In 14 career games, the former Notre Damer has thrown for over 300 yards six times, which is fifth in school history. Ryan and Flutie own the school record with 12 career 300-yarders.

The 6’5” and 226-pounder injured his hand in the second game of the season against UMass and initial reports indicated that Jurkovic might not return in 2021. The redshirt junior overcame the injury projections and returned two weeks ago against Virginia Tech. He stayed in shape by running despite not being able to throw the pigskin.

The workouts paid dividends: “He’s looking faster than me out there. Every time I see him, I walk up to him and tell him, ‘Hey, you looking good.’ That’s all I can tell him. I wasn’t expecting him to be moving like that when he first got back,” teammate Zay Flowers professed (boston.com).

In general, playoff teams are strong at quarterback and not likely to need one to win a championship. However, injuries do occur and matchups can dictate fantasy production. The Eagles qualified for a bowl invite with the victory over the Yellow Jackets. Boston College hosts Florida State and Wake Forest in the final two weeks of the campaign, and Jurkovic provides a nice waiver wire option for CFF owners in need at the position.

In 2021, who was the best waiver wire acquisition at quarterback?

“Sam Hartman was more of a surprise than the others.” @aceholesrule

There’s only one word I could conjure up to aptly describe Sean Tyler being owned in only 10% of leagues: malfeasance.

Typically we discuss malfeasance when considering wrongdoing at a place of work, but here it applies to CFF player’s ineptitude on the waiver wire. Whether or not your league-mates ought to be relieved of their duties for failing to recognize Tyler’s talent is a discussion for another day, so let’s focus on the player himself.

In the offseason, CFF analysts predicted that Michigan State transfer La’Darius Jefferson would lead this Broncos’ backfield and be a productive player to roster in 2021. That hasn’t been the case. Sean Tyler came back from injury and has taken the MAC by storm. He’ll likely finish with over 1,000 scrimmage yards and 10 total touchdowns, emerging as a CFF asset seemingly out of nowhere.

Talent has always been there with Tyler—he pops off the screen with his vision, burst, and agility. It’s always been a matter of opportunity, as Western Michigan likes to divvy up carries among multiple backs—hampering their fantasy utility.

Tyler has proven that he doesn’t require workhorse usage to be a fantasy producer. Despite not totaling 20 carries in a single game this season, he’s averaging nearly 17 fantasy points per contest. With two very friendly matchups awaiting against Eastern Michigan (107th against the run) and Northern Illinois (119th), Tyler’s worth a flex spot in the championship rounds.

Looking ahead to next season, college fantasy footballers have a fantastic foursome among this year’s freshmen runners—Rasheen Ali, Braelen Allen, TreVeyon Henderson, and Devin Neal—to acquire in CFF drafts. Neal is the overlooked playmaker as the season comes to a conclusion.

While some Dynasty and Devy players have touted Neal as a runner to acquire, he has remained in the CFF free agent pool at only 11% rostered. It is difficult to add a running back on a terrible 2-8 Kansas team. Yet. After Saturday’s incredible performance against Texas, Neal finally illustrated his fantasy upside.

In the 57-56 upset of the Longhorns, Neal nearly led Kansas to victory by himself. He scored the game-winning touchdown in OT for his fourth score of the evening. Against Texas, he earned 24 carries and scampered for 143 yards, and snatched two passes for 26 yards. Neal also scored four times, producing 42.9 fantasy points.

As a senior in high school, Neal was named First-Team Class 6A All-State by the Capital-Journal and First-Team All-State by the Wichita Eagle. He rambled for over 1,300 yards and 20 touchdowns. In the 2021 recruiting class, Neal was the consensus top-ranked recruit in Kansas, and Rivals rated him as the No. 24 running back in the nation. 247Sports graded the Jayhawks runner as a three-star prospect.

A dual athlete, he also played baseball in high school and is expected to suit up on the diamond this spring for Kansas. “I love both sports. I couldn’t give it (baseball) up. Some days I’m like, do I really want to do this or am I just tired. But you just have to push through it, and, you know, go swing the bat for 30 minutes, stay in rhythm,” Neal stated in early September (Kansan.com).

Neal climbs up Dynasty and Devy boards after his performance against Texas. In the final two weeks of the season, Kansas travels to TCU and hosts West Virginia. Expect a heavy workload for the 5’11” and 210-pounder as the Jayhawks continue to improve in coach Lance Leipold’s strong ground game.

Identify the best true freshman in college fantasy football in 2021.

“TreVeyon Henderson is amazing but Braelon Allen has been equally impressive and is two years younger than him!” @copieps

I’ve been mentioning Tennessee players in this column all year long, so I figured I’d get back to my roots and mention one last Volunteer to roster before the season ends.

You’ve probably heard by now that Georgia’s defense isn’t too shabby. Tillman showed no signs of recognition that the Bulldogs are supposed to shut down opposing players, amassing 10 receptions for 200 yards and a score on Saturday against the nation’s top-ranked defense. It was yet another impressive performance for the Tennessee receiver, who now has at least six receptions in five straight games and has a touchdown reception in four straight.

I’ve gone over this offense ad nauseam in this column before, so let me spare you the details and sum it up with this: this offense runs a ton of plays under coach Josh Heupel, and more plays leads to more fantasy points. Volume is king in fantasy, and any team operating up-tempo will accumulate more offensive statistics by virtue of running more plays. And hey, this offense isn’t too bad, either—they’re averaging 36.1 points per game.

Even though Tillman has proven to be matchup proof, it’s nice to know that he has two friendly matchups to finish the season—South Alabama and Vanderbilt. Own Tillman with confidence.

Two freshman wide receivers are dominating their classmates this fall. While Xavier Worthy, Texas garners national attention, Konta Mumpfield has also impressed teammates, onlookers, and CFF managers, ranking among the top 40 wide receivers in the nation. The Zips’ freshman has produced 173.4 fantasy points compared to the Longhorns’ rookie with 201.5 points.

Since October 8, Mumpfield has eclipsed the century mark in receiving three times and corralled 35 passes for 440 yards and four touchdowns, scoring 85.5 fantasy points. On October 19, The Athletic named the Akron playmaker to its midseason All-American freshman team.

Against Western Michigan last Tuesday night, Mumpfield burned the Broncos’ secondary with 11 catches for 122 yards and two touchdowns, establishing career highs in receptions and yards in a game. At 6’1” and 178-pounds, Mumpfield has secured 57 receptions for 684 yards and eight scores this year.

Akron concludes the season with two potential high-scoring contests against Kent State and Toledo: Both games should provide plenty of fantasy scoring in #MACtion over the next two weeks.

Identify the top surprise difference-maker at wide receiver in college fantasy football in 2021.

“Lil’ Deven Thompkins!!! Man, this guy produced week in and week out no matter who was under center for Utah St.” @aceholesrule