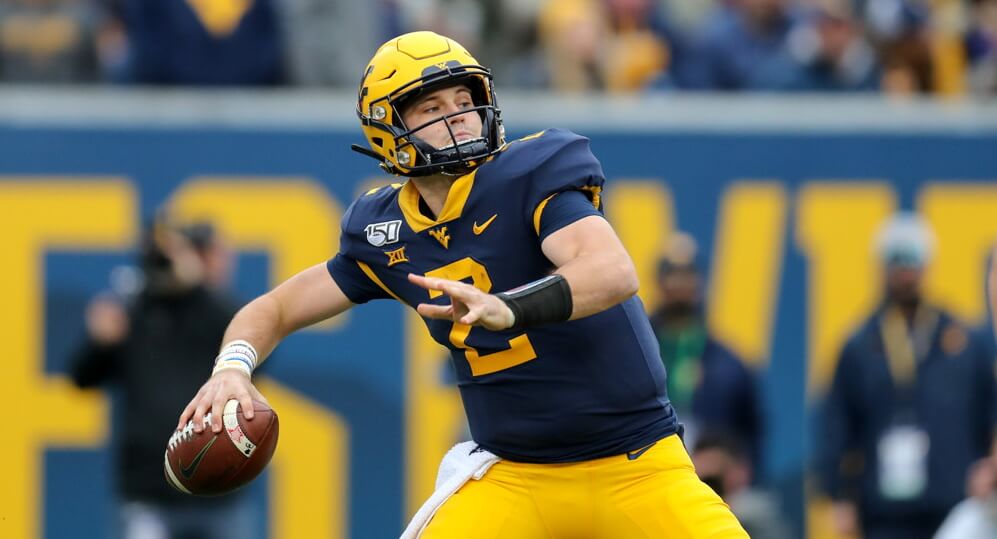 In 2019, Doege transferred to West Virginia and called signals the final three games while still qualifying for a redshirt campaign. In limited action, he tossed seven touchdowns on 79 completions. During training camp, the junior competed with Oklahoma grad-transfer Austin Kendall and won the competition to start for the Mountaineers.

On Saturday, the Lubbock, TX native continued producing fantasy points. He threw for 228 yards and three touchdowns in a 56-10 victory over Eastern Kentucky. All of the numbers were produced in the first half as Doege remained on the sideline after intermission.

West Virginia does not play this weekend and opens the Big 12 schedule in two weeks on the road against Oklahoma State and hosts Baylor afterwards. In a potentially explosive offense, Doege should be acquired on CFF rosters.

A consensus 2020 four-star, dual-threat QB out of Jacksonville, Jeff Sims drew nationwide acclaim by being selected to participate in the prestigious Elite 11 QB competition in 2019. ESPN rated Sims as the sixth-best dual-threat quarterback from his class and is considered to be one of the best recruits ever to set foot on the Yellow Jackets’ campus. Though highly regarded, Sims entered fall camp behind incumbent starting QB James Graham. Coach Geoff Collins kept his starting QB quiet until the eve of their opening contest with Sims pulling off the upset and supplanting Graham atop the Georgia Tech QB depth chart.

Sims paid off Collins’ bold decision by orchestrating a thrilling 16-13 victory over Florida State in his first career start. The 18-year old completed 24-of-35 passes for a 68% completion percentage, 277 yards and a 1:2 TD:INT ratio. His 24 completions were the most by a Georgia Tech quarterback since Reggie Ball completed 27 passes back in 2003. On the ground, he rushed 13 times for 64 yards and evoked images of Lamar Jackson-lite. He made some mistakes, as is evidenced by the two picks, but his talent is undeniable.

I’m always leery of run-first CFF quarterbacks that get hype in college fantasy and DFS circles. If a QB can’t run a crisp 2-minute offense when your team is behind two scores, then you need to find someone who can. Sims’ arm strength is legit. He led the Yellowjackets on an eight-play, 72-yard fourth-quarter drive capped off by a 15-yard touchdown pass to his top receiver Malachi Carter tying the game at 13-13.

Jeff Sims could be the player who ushers in a new era at Georgia Tech. For seasonal purposes, his value is still somewhat limited since their roster is still developing and he needs to acclimate to the speed of the game while facing a legitimately brutal ACC schedule. Georgia Tech faces UCF, Louisville, Clemson, Notre Dame, Pittsburgh and Miami over an eight-game stretch in the heart of the shortened CFF regular season. I have him ranked at QB No. 31 in the current player pool, and he is a priority add in Dynasty formats.

Who is the most fascinating quarterback to acquire on the Waiver Wire?

“McCall flashed some running talent. I will go McCall,” @aceholesrule

When scanning the ownership percentages, it shocked me that so few CFF team rostered Marcus Williams, Jr. or Camerun Peoples. Every season since 2014, the Mountaineers have produced a 1,000-yard rusher (Marcus Cox, Jalin Moore, and Darrynton Evans) and last year’s leader, Evans, now plays in the NFL for the Tennessee Titans.

Williams rushed for over 500 yards in three consecutive seasons, and Peoples, who missed last season after suffering an ACL tear, looks like a future star. Against Charlotte on Saturday, Appalachian State continued its dominance on the ground. The Mountaineers rotated runners in the backfield Saturday, and both Williams and Peoples eclipsed the 100-yard mark and scored a touchdown.

At 5’10” and 210-pounds, Williams punishes opponents, and Peoples, 6’2” and 210 pounds, also packs a punch. Unfortunately, Peoples left the EKU contest early and is questionable for next week. Williams’ value increases significantly if Peoples can’t suit up against Marshall. Astute CFF owners will keep a close eye on the Mountaineers’ backfield all season.

In 2019, South Alabama (2-10) didn’t exactly take the Sun Belt by storm. The Jags averaged a meager 18.7 ppg. with 330 ypg of total offense, marks that ranked 122 and 113 in FBS last season. Tra Minter led the USA backfield with 1,057 yards, 5.5 ypc, and five touchdowns while also thriving in the passing game by snagging 32 receptions for 209 yards. Carlos Davis served as Minter’s primary backup, posting a line of 61-269-4.4 ypc and two touchdowns in limited action.

Davis battled redshirt freshman Damean Bivins for RB No. 1 duty in fall camp with Davis coming out on top. Through the first two games of the year, Davis has solidified his grip on the RB No. 1 role as South Alabama has put themselves on the Group of 5 map with two very competitive performances against Southern Miss and Tulane.

Despite being underdogs in each, Carlos Davis has proved to be a steady backfield presence coach Steve Campbell can rely upon. He has already logged 33 carries for 162 yards, 4.9 YPC, and a touchdown to go with four receptions for 47 yards in the passing game. Davis’ advanced stats back up the improvement he has made from last year. He has already broken 15 tackles in 33 touches for an elite 45% broken tackle percentage. Davis has also been targeted six-time, including five last game against Tulane. On his four catches, he is averaging 8.8 yards after catch, which belies his elusiveness.

Davis’ all-purpose role is on an upward trajectory right as USA embarks on its’ fantasy-friendly Appalachian State-free Sun Belt schedule. He should be owned in all 12-team formats and started when his favorable schedule makes it advantageous to do so.

Who is the most interesting running back to acquire on the Waiver Wire?

“I wouldn’t take him over the other three guys listed, but Deuce Vaughn, Kansas State is an interesting one,” @InsiderCff

A 6’0” and 180-pound four-star prospect from Frisco, TX, Mims was graded by 247Sports as the 29 WR and the 26-overall recruit from Texas in this year’s freshman class. In high school testing, he posted a 4.67 40-yard dash and a 37-inch vertical showing his athletic pedigree isn’t just tape. His high school production was absurd, as Mims set the all-time Texas single-season record with 2,483 yards.

Apparently, the mark unofficially breaks the national record for receiving yards by surpassing J.P. Shohfi of San Marino, CA who had the previous record at 2,464 yards. No idea why it’s “unofficially” the record, but I am left to assume it has something to do with Texas and California’s eternal animosity for each other.

Fast forward to last Saturday as Mims catches Spencer Rattler’s first TD pass of the year by way of a beautifully thrown 58-yard dime. Mims went on to catch three of his four targets for 80 yards and a touchdown and announced himself as a player to be taken seriously in all league formats in 2020.

There are a lot of mouths to feed in Oklahoma, as eight players caught two passes or more. But so long as Mims is getting 6-plus targets in Oklahoma he is going to have a huge weekly ceiling.

One of the truly amazing aspects of College Fantasy Football is how many unowned skill position players explode and gain immediate relevance during the first few weeks of the season.

From the Week 2 wide receiver pool, the zero-to-hero award goes to Taylor Morin. He was almost assuredly owned by no-one outside of his immediate family in CFF-DFS leagues last week. As Morin only measures 5’10” and 174-pounds, he didn’t have a great amount of fanfare associated with his recruiting and was listed as a second-teamer with the ambiguous “or” designation on the depth chart heading into the contest.

However, Morin proved to be a savvy and efficient receiver with sure hands and a great feel for spacing. In fact, he was pretty much the only bright spot for the Wake offense in a game where they got manhandled by the numero uno ranked Clemson Tigers. For his part, Morin caught nine-of-ten receptions for 93 yards and a touchdown while showing a rapport with Sam Hartman along with backups Michael Kern and Mitch Griffis. 47 of Morin’s receiving yards came after the catch as no other Wake Forest receiver topped four catches. Only a redshirt freshman, Morin has staked his claim as a ppr. factor going forward for a Wake Forest team that led the nation in pace of play last season, averaging 83 snaps per game.

Morin is a dynasty waiver wire dream and should be scooped up in all PPR seasonal formats. He might not be explosive enough to start every week in a yardage-based format though. Wake’s next game against NC State will shine some light on his usage going forward.

My CFF: On Campus teammate, Eric Froton suggested picking up Texas’ wide receiver Tarik Black in last week’s column. And the former Michigan wide out did not disappoint with five catches for 80 yards and a touchdown.

Luckily for CFF diehards, the Longhorns provide a cornucopia of fantasy gems with QB Sam Ehlinger on the mound. Texas named Joshua Moore a starter coming out of camp, and the speedster left UTEP defenders in the dust. He snatched six passes for 127 yards, including a game-opening 78-yard touchdown reception.

At 6’1” and 169-pounds, the redshirt sophomore suited up for six games as a true freshman before suffering a season-ending knee injury in 2018. The former four-star recruit missed all of last year, but he is healthy and ready to make an impact in the Longhorns’ aerial assault in 2020. The Longhorns offensive ranks among the elite in college football and Moore should be rostered on more CFF teams.

Who are you prioritizing on the Waiver Wire at wide receiver?

“Give me Dez! Louisville will score points each week,” @aceholesrule

“I still believe Dez Fitzpatrick is one of the most under the radar receivers in College Football,” @[email protected]

I badly covet a slice of the Tigers’ high-flying offense, and Braden Galloway is still available in over 50% of CFF leagues. Last year, Galloway failed a drug test prior to the 2018 College Football Playoffs. Luckily, the suspension only lasted for a calendar year, and he returned in time for the 2019 post-season. In the two games he played, the junior earned 65 snaps and corralled two passes for 60 yards.

Against Wake Forest, Galloway seized five passes for 60 yards. At 6’4” and 240-pounds, Galloway provides QB Trevor Lawrence a huge target in the middle of the field and owns the speed and athleticism to pressure defenses deep down the seam of the defense. I am procuring Clemson’s playmaker before the masses jump on the bandwagon.

Check out last week’s top adds to see if any of them are still available in your league!