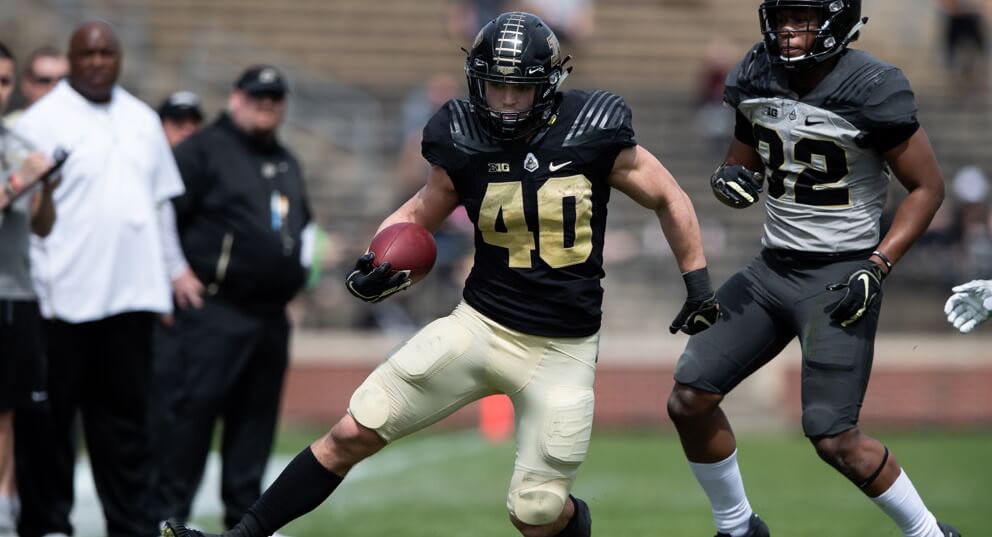 In my 13 years playing college fantasy football, no season presented a greater challenge to victory. With all of the cancellations, I have spent countless hours on the waiver wire updating my roster. Fortunately, my perseverance and fortitude paid dividends, and I made the playoffs in four leagues. I still have a chance at earning a few rings in 2020. In this week’s Scholar’s Surreptitious Starters, I identify the preeminent college fantasy football sleepers in Week 12 of the NCAA Football season to assist CFF owners in their campaign for a championship.

In 2016, I won a CFF championship with USF quarterback Quinton Flowers, who was the AAC Offensive Player of the Year under coach Willie Taggert. Now, the former Bulls’ coach heads the program at Florida Atlantic and has another exciting playmaker behind center.

In Shula Bowl XIX against FIU last week, Javion Posey earned the start and secured a spot among the most prolific CFF signal callers, finishing fourteenth at the position with over 35 fantasy points. The redshirt freshman totaled three touchdowns, passed for 80 yards, and set an FAU single-game rushing record for quarterbacks with 140 yards.

“For it to be his first game, I’ll give him a B. (Posey) doesn’t get phased very easily. I think that’s a great quality to have as a quarterback,” Taggart stated earlier in the week (palmbeachpost.com).

Over the past three seasons, I have often plucked players off the waiver wire playing UConn and UMass to insert into my lineups. The Huskies are not playing in 2020, but the Minutemen are back this week for only their third game of the campaign. If CFF managers need a starter, Posey provides a nice option despite Taggart’s reluctant praise of his dual-threat quarterback.

Last week, coach Scott Frost finally pulled the plug on Adrian Martinez as the Cornhuskers’ starting quarterback. Redshirt freshman Luke McCaffrey earned the first start of his campus tenure against Penn State on Saturday, guiding Nebraska to a 30-23 victory. At 6’2” and 200-pounds, the dual-threat field general passed for 152 yards, rushed for 67, and totaled two touchdowns.

In 2020, McCaffrey has been an offensive weapon. Versus Ohio State, he had a notable season debut, completing 4-of-5 passes for 55 yards, rushing for 80 yards on only nine carries, and scoring on a five-yard catch. He also had a career-long 47-yard romp on the inaugural touchdown drive. Against Northwestern, McCaffrey completed 12-of-16 passes for 93 yards and scrambled for 49 yards.

The Cornhusker faithful and CFF diehards have waited patiently for coach Frost’s offensive scheme to detonate after a pronounced UCF tenure. It is only one game, but McCaffrey looks capable of leading Nebraska’s offense down the stretch, and he has a favorable matchup versus Illinois on Saturday.

Who Ya Got at quarterback as a sleeper this week in CFF leagues?

When I contemplate the Boilermakers’ scheme, I obviously think of their prodigious playmakers at receiver. However, Zander Horvath has been among my college fantasy football waiver wire gemstones this year and become a fantasy-worthy starter over the past month. In three games, he has gained 252 yards rushing on 53 carries, snatched 17 passes for 155 yards, and scored once.

Since the Big Ten kicked off the 2020 crusade, Horvath ranks as the twentieth finest ball carrier in college fantasy football, scoring over 63 points. The 6’3” and 230-pound junior has logged over 20 points in consecutive games and produced over 15 points in the opening game against Iowa.

The bruising and punishing runner beats opponents on the ground and in the air, which CFF managers adore. Minnesota cannot repeat last year’s magical carpet ride, losing three games and hemorrhaging points against opponents. Horvath is in a smash spot to easily produce over 20 fantasy points and available in 90% of leagues.

The Pirates’ passing game has disappointed CFF managers in 2020, but RB Rahjai Harris has been a pleasant surprise. The freshman stepped onto the field against South Florida to carry the ground game, and he has conquered opponents from the first carry.

In four of five games, Harris has logged more than 15 fantasy points and totaled more than 20 in three games. For the season, the ECU ball carrier has rushed for 559 yards and scored five times, averaging over 80 yards per game and 4.9 yards per carry.

East Carolina has not beaten Temple since the program joined the AAC; nevertheless, the Pirates are in a great situation to earn the elusive win this Saturday. The Owls are 1-5 and have lost many key players on both sides of the football. In their last three games, Temple has been pulverized by opponents on the ground, surrendering 625 yards and seven touchdowns: UCF (147 & 3), SMU (194 & 2) and Tulane (284 & 2).

Quarterback Holton Ahlers and the wide receivers have been inconsistent, but coach Mike Houston can rely on Harris to move the chains. I have plucked Harris off the waiver wire on two playoff teams this week and anticipate his fourth 100-yard outing of the season.

In CFF leagues, Who Ya Got at running back as a sleeper this week?

All season I have waxed poetically in regard to the undefeated and seventh-ranked Cincinnati defense and QB Desmond Ridder. Regrettably, the wide receivers provided few weekly options for CFF owners despite Ridder’s feats.

While watching the Bearcats over the past three games, Michael Young, Jr. popped in the passing game. He has logged 12 receptions for 150 yards and two touchdowns, averaging 12.5 yards per catch. For the year, Young leads Cincinnati in catches (22) and receiving touchdowns (3) and is second in yards (251).

A graduate transfer from Notre Dame, the junior played in 29 games for the Irish and recorded 18 receptions for 177 yards and a pair of scores. Before coming to Cincinnati, Young researched offensive systems and looked for a scheme that targeted the slot position. The Bearcats provided a near-perfect match. “I’m glad I was able to be in college and I’m able to understand offensive schemes. I can see where I fit into the offense and what I’d be allowed to do,” Young explained in the spring (irishsportsdaily.com).

At 5’10” and 190-pounds, Young has blossomed during his first season in Cincinnati. The matchup against UCF provides an opportunity for the Cincinnati passing game downfield, and Young is one of the better college fantasy football sleepers to place into lineups during the first round of the playoffs.

At wide receiver, Who Ya Got as a sleeper this week in CFF leagues?

Looking for more roster help? Check out John’s college fantasy football sleepers from last week to see if they are still available.