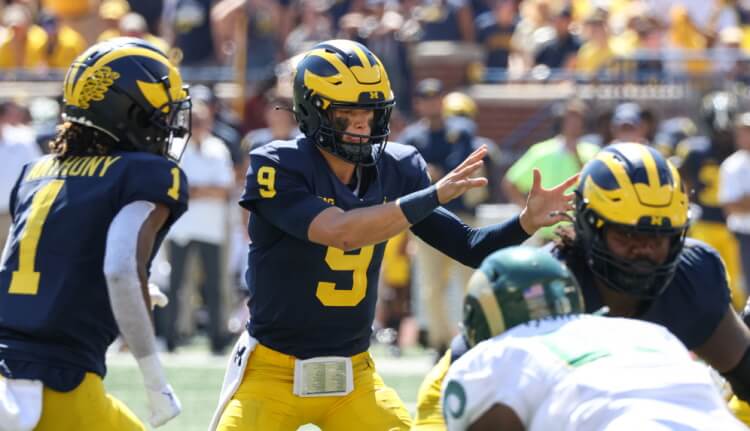 After two weeks, the Sun Belt Conference has provided so many exciting offensive teams and explosive college fantasy football players. Astute CFF managers are closely monitoring the rosters of Georgia Southern, James Madison, South Alabama and Marshall to boost their CFF teams and insert players into their starting lineups.

In today’s column, there are three Sun Belt players featured for readers. I have also identified six other players, who are possibly available on the waiver wire in your season-long CFF leagues to place in lineups. Matt Hicks and I break down the upcoming College Fantasy Football slate on the CFF Week 3 show presented by the Rookie Big Board, and CFF fanatics in the Twitterverse provide insight and analysis for potential starters this week.

Charlotte ranks among the bottom 10 pass defenses in the nation and has been generous to opposing quarterbacks–N’Kosi Perry and Taulia Tagovailoa–this year. Georgia State is winless; however, the Panthers have played South Carolina and North Carolina, which are two difficult matchups for a G5 program.

After a poor outing against the Gamecocks, Darren Grainger shined versus the Tar Heels last week, passing for 186 yards and three touchdowns and rushing for 75 yards. A dual-threat signal caller, the senior is in a prime position to produce a cornucopia of fantasy points. The Panthers are huge home favorites, and the offense runs through the arms and legs of their quarterback.

The offensive numbers were not impressive last week against a stout Iowa defense. Yet, Hunter Dekkers impressed me with his competitiveness and fortitude, leading the Cyclones to a fourth-quarter victory. Over the first two weeks of the season, Ohio has been bludgeoned in the secondary. Dekkers will throw for nearly 300 yards and at least two touchdowns on Saturday.

Coach Jim Harbaugh clearly had a plan at the quarterback position this year. Play Cade McNamara in the first game and start J.J. McCarthy, who is a more physically gifted and talented player, against Hawaii, one of the worst teams in the nation.

Now, the Wolverines welcome the Huskies to Ann Arbor, and McCarthy gets the nod once again. UConn is better than in recent seasons on the defensive side but the Michigan offensive line will dominate the line of scrimmage. McCarthy is a dual-threat competitor, who will score a plethora of fantasy points in the air and on the ground.

Despite the loss in OT against Texas Tech, Brandon Campbell illustrated his fantasy upside in coach Dana Holgorson’s offense. The USC transfer earned 16 carries and gained 80 yards with a score. He also corralled four passes for 54 yards, totaling 134 yards from scrimmage.

After losing to the Red Raiders, the Cougars return home to host the undefeated Jayhawks. Surprisingly, Kansas has scored over 50 points in both victories while surrendering 42 against West Virginia last week. The best way for the Cougars to get back on track is to feed their 5’10” and 210-pound runner in order to keep the Kansas offense on the sideline. I expect another productive fantasy outing for the redshirt freshman.

Whenever I see an O/U projection at greater than 65, I must look closely at the backfield of the favored team. The game script foretells a heavy ground game in the second half.

Eric Gary has run the ball efficiently, averaging 6.7 ypc. on 26 carries and producing 39 yards on three receptions. Unfortunately, he has not scored yet. Touchdowns are fickle and can come in bunches at times. I expect Gray to find huge lanes against the porous Cornhuskers’ D-line and cross the finish line for the first time while scoring over 20 fantasy points.

While Anthony Richardson has gained the attention of the CFF community, Montrell Johnson has been ignored by the casual CFF diehard. In two games, he has rambled for 137 yards, averaging 7.2 ypc. and scored once. He also has two catches for 17 yards.

After a disappointing performance in the loss against Kentucky, the best way to alleviate the pressure off Richardson is to run the football. It is time for Johnson to have a statement game with 20 carries and over a 100 yards versus an undermanned Bulls’ front.

I wanted to highlight Champ Flemings in Tuesday’s Waiver Wire Gemstones column but noticed that Arkansas State travels to Memphis this week. Instead, I placed the Red Wolves’ sleek speedster in the honorable mention portion of the column, hoping readers noticed. I decided to feature Flemings as a sleeper this week.

In two games, the former Oregon State receiver has been targeted 17 times and corralled every pass for 227 yards and a touchdown. After his 10-catch afternoon against the Buckeyes’ last week, Fleming reflected on his performance: “It’s just taking another step in the direction of building that confidence. [Today] showed that on any level, on the biggest stage, wherever we have to play, whoever we have to play, we’re up to the challenge.” (nwaonline.com) Memphis does not have the personnel to slow the Arkansas State passing game and Fleming’s big-play ability on Saturday.

Sometimes, there is a real bias against teams on the West Coast. There has been very little attention to how well Jalen McMillan has played for the Huskies. In the first two games of the year, he has snatched nine passes for 214 yards and a touchdown: the sensational sophomore has averaged 24.2 FPPG.

The matchup does not look enticing on paper but context must be considered. The Spartans’ pass defense was horrendous last year, and while the team improved the secondary in the offseason, how much better is it? Michigan State has not faced a receiver as explosive as McMillan or a Power 5 aerial attack. I have doubts in regard to the pass defense. Do not shy away from starting McMillan at home this Saturday.

In the summer of 2021, I drafted Sam Pinckney, who played at Georgia State before transferring to Coastal Carolina, on many of the CFF teams. Regrettably, he did not even come close to matching his production from 2020. So far in 2022, Pinckney has rebounded and become the top dog in the Chanticleers’ aerial assault with 10 catches for 156 yards and a score. The senior home run hitter should easily eat against a poor Buffalo secondary.

Who Ya Got at Quarterback?

“Davis Brin gets Jacksonville State where you can start him. Then, you’ll probably sit him for two weeks against Ole Miss and Cincinnati. Finally, you get the AAC schedule where he is a weekly option.” @copieps

“Seth Henigan for me. The offense is running through him this year, and I expect a high-scoring affair with Arkansas State.” @aceholesrule

“Arkansas State-Memphis should be a shootout. Let it ride with Seth Henigan.” @CFFonIG

“I like Seth Henigan here. I think the game vs Arkansas State has potential to be a shootout, and he beat up on Navy last week, throwing for 415 yards and two touchdowns.” @RJsFantasyFB

“Michael Penix, Jr. has been good, but Davis Brin has been lights out!” @CffNation

“Davis Brin!! I picked him up in both leagues I’m in, paired him with Stokes in one league and Santana in the other.” @CGapBlitz

Who Ya Got at Running Back?

“I’m a Kenny McIntosh guy, but I’m going Re’Mahn Davis the ex-Temple Owl is averaging 5.7 yards per carry, with 269 yards and two scores. Add in nine receptions for 46 yards and a touchdown. Vanderbilt has been a surprise this year led by Davis!” @NinoBrown_T2T

“In any type of PPR league, it has to be Kenny McIntosh. So far, he’s been the main target in a Georgia offense that is racking up points and doesn’t really get a tough SEC defensive matchup until the end of October.” @copieps

“Tahj Brooks for me. With D. Smith at quarterback, Texas Tech needs Brooks to continue his hot hand.” @aceholesrule

“Kenny McIntosh makes the most sense to me. He’s running behind the best O-Line of the bunch, and I don’t love the other three matchups. This should be UGA’s ‘closest’ game for the year. If it’s a PPR format, his 14 receptions and 178 receiving yards through two games can’t be ignored.” @RJsFantasyFB

Who Ya Got at Wide Receiver?

“I’ll take Nikko Remigio. Jalen Cropper and him have been a breath of fresh air for Fresno! I like the 15 receptions for 200 yards, but his 13.3 yards per catch, I love more!!” @NinoBrown_T2T

“Ricky White should prove to be the real deal for the season and not a one-game wonder.” @CFFonIG

“Nikko Remigio is the best wide receiver at Fresno State. He is getting the ball often and only a matter of time before a two-touchdown game happens….will this be the week?” @aceholesrule

“Ricky White: When SMU’s high-powered passing attack visited North Texas just two weeks ago, they assaulted the Mean Green’s defense with 4 different wide receivers scoring and two of which racked up over 100 yards receiving! I think Ricky White bounces back and finds the endzone and the O/U sits at 63!” @RJsFantasyFB