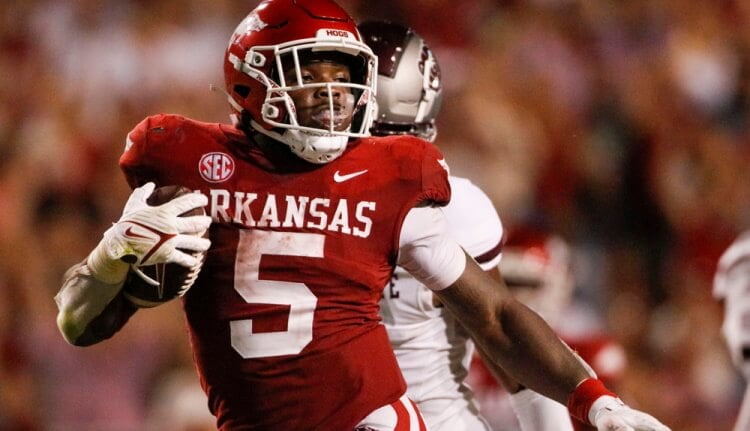 I have a confession: I have never shopped on Black Friday during my lifetime…not once. I prefer to sit home after indulging in a huge Thanksgiving feast and watch college football all afternoon. It is one of my favorite days of the year.

With rivalry weekend and CFF Championships on the line, I cannot wait for 36 hours of college football action and play some PrizePicks and DFS on both Friday and Saturday. Today’s column focuses on Friday’s action and another article will come out Saturday.

I have highlighted four players likely available in season-long CFF leagues to consider in lineups, and CFF diehards in the Twitterverse provide insight and analysis for potential starters.

Adrian Martinez ascended to CFF starter in October. Unfortunately, he played in only two games in November and is no longer a reliable signal caller. Will Howard now commands the offense for the Wildcats, guiding the team to three consecutive victories.

In three of the past four games, the 6’5” and 235-pounder has produced over 30 fantasy points and scored 28.4 in the other one. Against West Virginia last Saturday, he led Kansas State to victory and totaled three touchdowns.

“Will Howard was really good. He’s been under control. I’m happy for him to come back here (West Virginia)…Will is playing at a really high level, and he is one of the most improved players in college football,” coach Chris Klieman stated (kansas.com).

With a victory at home against their in-state rival, the Wildcats will clinch a spot in the Big 12 Championship Game against TCU. A huge favorite, Kansas State likely scores four touchdowns, and Howard will be integral in the offensive, and fantasy, production. Start the Kansas State junior with confidence this weekend.

Matchups. Matchups. Matchups. It is the key to uncovering diamonds in the rough this late in the season. The Panthers’ run defense ranks among the bottom 20 units in the nation and in three of the past four games have allowed an opponent to gain over 100 yards: Reynaldo Flores, UTEP (128), Larry McCammon, FAU (104) and Marquis Crosby, Louisiana Tech (115).

Can Florida International stop the ground game of Middle Tennessee? Highly doubtful. Since October 29, Frank Peasant is CFF RB11 in PPR formats, scoring 94.4 points. He has carried the ball 74 times for 330 yards and three scores in addition to 15 catches for 174 yards and two touchdowns. Do not be shy away from acquiring the Blue Raiders’ runner and inserting him into a Flex spot.

Unlike many true freshmen, Golden stepped onto the field immediately for the Cougars and garnered 22 targets in his first five games. Over the past four outings, he has taken a significant uptick in usage and production, grossing 31 targets and securing 20 passes. The freshman has also exceeded 15 fantasy points three times and eclipsed 100 yards twice.

Quarterback Clayton Tune is smoking hot, scoring over 40 points in six consecutive games. The matchup is not the most enticing for the Cougars’ passing game. Nevertheless, Tune is playing so well that the Cougars’ freshman is a viable starter against the Golden Hurricanes. A rising DEVY prospect, Golden is a Flex worthy option in CFF Championship Games.

For very good reasons as a CFF diehard, I obviously watch far too many AAC games. The Conference has many high-scoring offenses, and the Ponys’ passing game is a fantasy-friendly scheme. In eight games, QB Tanner Mordecai has logged over 280 passing yards and averaged over 300 PYPG with 29 aerial strikes.

A freshman, RJ Maryland got off to a slow start. Since the Cincinnati game on October 22, the Mustangs’ tight end has blossomed as a fantasy producer. He has twice transcended 20 points, and last week, racked up 24.1 points versus Tulane with a season-best six receptions and two touchdowns.

While the Tigers’ must focus their defensive attention on Biletnikoff semifinalist Rashee Rice, Maryland will see advantageous coverages and matchups for the Mustangs. A four-star prospect, the 6’4” and 217-pounder provides CFF managers with a nice waiver wire option for their championships.

Who Ya Got at Quarterback?

“Going with the Owls’ freshman quarterback E.J Warner! After a terrible performance versus Cincy, I expect Warner to get back to normalcy with 275-plus yards and a pair of scores. East Carolina allows close to 400 YOFF per game and 79% Opp RedZone Conversation percentage. So Warner should have plenty of opportunities.” @NinoBrown_T2T

Who Ya Got at Running Back?

“Calvin Tyler for me. He will bust a long run and eclipse his best week.” @aceholesrule

“I’m going with Elijah Green. He has been scoring touchdowns for a while on six to eight carries per game. Over the last three games, he has averaged 16 attempts per game and 90-plus yards. Add in the long-shifty TD run! Gimme Green against the Wolfpack!” @NinoBrown_T2T

Who Ya Got at Wide Receiver?

“Jaylen Hall for me. He is comfortable in the offense, and I think he goes for over 100 yards and a score this week.” @aceholesrule

“In two out of the last three games, Antwan Wells has gone over the century mark. Last week versus the Volunteers he had 11 catches for 167 yards. He’s alive and riding the hot hand of Spencer Rattler…Gimme Wells!” @NinoBrown_T2T