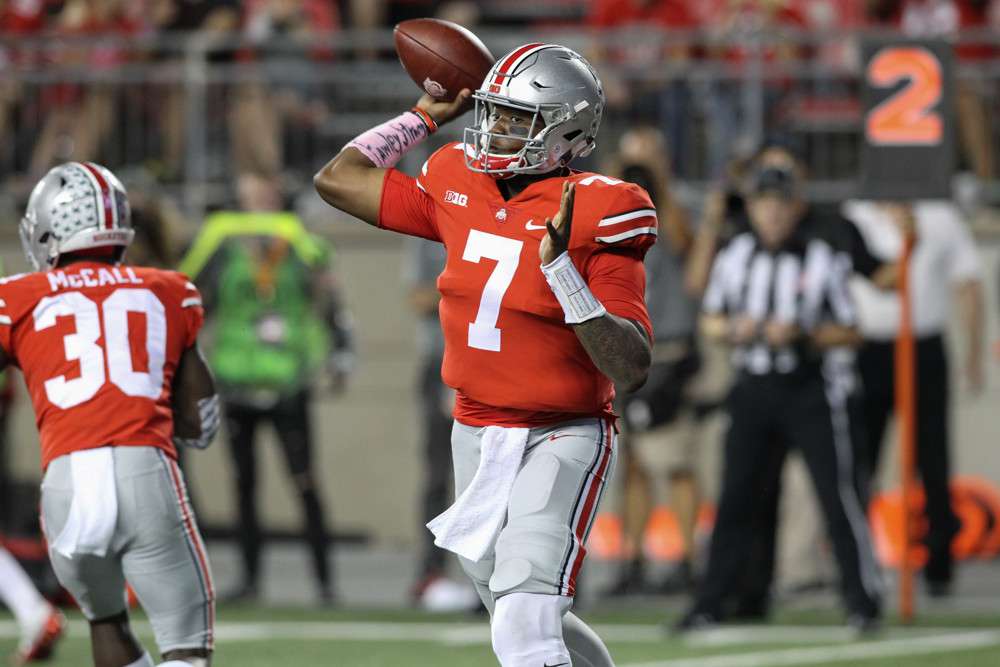 Some schools are notorious for putting out incredible fantasy talent at the same position every year. With everyone preparing their big boards for the NFL Draft, let’s take a look at which schools farm out talent at one specific position each season.

Note: The schools listed were chosen based off of offensive scheme and fantasy production of previous players.

Texas Tech has produced top-tier quarterbacks for multiple seasons now with their Air Raid offense and miserable defenses. Between Mike Leach and Kliff Kingsbury, Texas Tech has produced a top-10 passing offense nationally for at least 10 consecutive seasons. Texas Tech quarterbacks are almost assured of 4,000 passing yards per season and have the advantage of taking on weaker Power Five defenses in the Big 12. Nic Shimonek graduated last season, and if you’re not anxiously waiting to see if Jett Duffey, McLane Carter, or Alan Bowman take the job, then you are already starting off 2018 on the wrong foot.

Washington State’s recent success at quarterback is no doubt due to the offensive mind of Mike Leach. Washington State’s passing offenses have ranked among the nation’s best in the last seven seasons with five of those quarterbacks throwing for 3,000+ yards. All seven quarterbacks would’ve thrown for 4,000 yards if it weren’t for injuries (especially to Connor Halliday). As long as Leach is in control of the Cougars, then their quarterback spot is one to watch. This season, the battle is between freshman Camm Cooper, Trey Tinsley, Anthony Gordon, and ECU-transfer Gardner Minshew.

You won’t find the Buckeyes at in the top 10 nationally in passing offense, but boy do they score often. Both Braxton Miller and JT Barrett made the all-time list for career passing and rushing yards for Ohio State football and called their own number often. Mobile quarterbacks are a delicacy in college fantasy football, and Ohio State is a production factory for them. Dwayne Haskins is likely the guy this season and made an appearance in my preseason top 10 quarterbacks list.

Dabo Swinney has made Clemson a force to be reckoned with on both sides of the ball. Deshaun Watson and Tajh Boyd are now both household names for Clemson and both put up monster points while at Clemson. Clemson’s spread-option system makes the quarterback a first-round pick almost every season. Kelly Bryant is the guy for Clemson for at least the beginning of the season, and the future seems bright with five-star quarterbacks Trevor Lawrence and Hunter Johnson or three-star quarterback Chase Brice waiting in line. Bryant is undoubtedly the player to own, but you might want to take the Lawrence handcuff just in case.

Duh. Between Chip Kelly, Mark Helfrich, and Willie Taggart, Oregon has produced a 1,000+ yard rusher 10 times in 12 seasons, with the outliers finishing just under the 1,000-yard mark. Taggart has left for Florida State, but given that new coach Mario Cristobal has an Alabama background, it’s safe to assume that the Ducks will run the ball a lot in 2018, as well. Tony Brooks-James seems to have taken over the top spot for Oregon in 2018, and with improvement over the offseason, he could produce similar numbers to Byron Marshall.

Another obvious team. Georgia signs five-star running backs like it’s going out of style, and the chain continues with their most recent signing of Zamir White. Georgia may not lead the nation in rushing offense from year-to-year, but with a system change into a more ground-and-pound style, the Bulldogs are going to have more fantasy production from the running back position. DeAndre Swift in undoubtedly next in line for the job considering he finished with 618 yards as the third rushing option for the Bulldogs last season.

Adam Muema was good, Donnel Pumphrey was one of the best to touch a college football field, and Rashaad Penny was statistically better than Pumphrey. San Diego State produces fantasy gold at running back from year-to-year, as they’ve been able to do it for eight years now, with every starting back in that time period topping 1,200 yards. Juwan Washington accumulated 759 rushing yards behind Penny last season and looks to take over as “the guy” for the Aztecs in 2018.

Utah has quietly had some of the most productive fantasy running backs over the past five seasons. Devontae Booker showed up on Utah’s all-time rusher’s list twice in his three seasons, and Joe Williams would have demolished the school season record had he not left early in the season to deal with the passing of his sister. Kyle Whittingham seems to revolve his teams around a strong running game, and that’s exactly what we’ve seen from the Utes during their time in the Pac-12. Even returning back Zack Moss was able to top 1,000 yards last season as a sophomore. If Tyler Huntley is able to stay healthy, the ceiling only gets higher.

Baylor’s offense was an offensive powerhouse under Art Briles and even finished in the top-25 last year in a 1-11 season. There’s always one receiver for Baylor that produces an ungodly amount of fantasy points every season. Given what we saw last season from Baylor in year one under Matt Rhule, they don’t seem to be slowing down anytime soon. Baylor’s offense could’ve very easily been on the quarterback list, as well, with the number of times they pass the ball. Charlie Brewer looks to be the next Baylor boomer at quarterback and, if he can get him the ball consistently, Denzel Mims is the next man up for Baylor at receiver.

Ole Miss has surprisingly had productive passing offenses the past several seasons despite facing tough SEC secondaries on a weekly basis. Hugh Freeze was relieved of his duties last season, but Matt Luke’s player production did not waver, even after Shea Patterson tore his PCL. Ole Miss’ receiving game has flourished with guys like Treadwell, Moncrief, and tight end/wide receiver hybrid Evan Engram. AJ Brown took the world by storm last season with 1,252 receiving yards and 11 receiving touchdowns and is undoubtedly Jordan Ta’Amu’s favorite target.

Dana Holgerson may be the most underrated coach in all of college football. Holgerson’s offenses have ranked in the top 25 offenses nationally in six of the last seven seasons, and each of those teams looked different each time. One recurring theme from a Dana Holgerson offense is that it almost always produces an NFL-caliber receiver. Tavon Austin and Stedman Bailey shook the landscape of college football with their speed. When Austin and Bailey left, Kevin White came on and served as one of the better big receivers in that year’s draft. Now Gary Jennings and David Sills V are owning Big 12 defenses with their large frames and athleticism.

The Rams may not have many players listed above, but their stats are hard to ignore. Higgins went for 1,000+ yards twice in his three-year career and had over 65 receptions in all three seasons. Gallup’s two seasons at Colorado State resulted in back-to-back seasons with more than 1,200 yards receiving and a combined 175 receptions. Colorado State’s offense will feature many transfer players, including Washington quarterback KJ Carta-Samuels and Tennessee wide receiver Preston Williams. Williams was a four-star receiver in 2016 and transferred after lack of opportunity with the Vols. He’s had glowing reviews in the spring and will likely be “the guy” come August.

David Shaw’s offenses seem to revolve around two aspects: a great running back and a pass-catching tight end. Stanford tight ends dominate in college and go on to the NFL and produce at a high level (see Zach Ertz). Given that tight end is such a hard position to fill in college fantasy football, it’s nice to have a school that averages 41 receptions, eight touchdowns, and 569 yards for tight ends over the last eight seasons. Colby Parkinson and Kaden Smith will both have their opportunity to shine this season in a long line of Stanford tight ends.

Stanford tight ends have produced recently, but Miami has shown off through history. Shockey, Olsen, and Graham are all NFL Hall of Fame-caliber tight ends, and Njoku is a promising prospect for the Cleveland Browns. Miami tight ends have averaged 31 receptions, four touchdowns, and 454 yards over the past eight seasons, and Mark Richt will continue this tradition with his own reliance on pass-catching tight ends. The position battle in 2018 comes down to top tight end prospect Brevin Jordan and Michael Irvin Jr. The winner will likely be at the top of the standings at the end of the year.