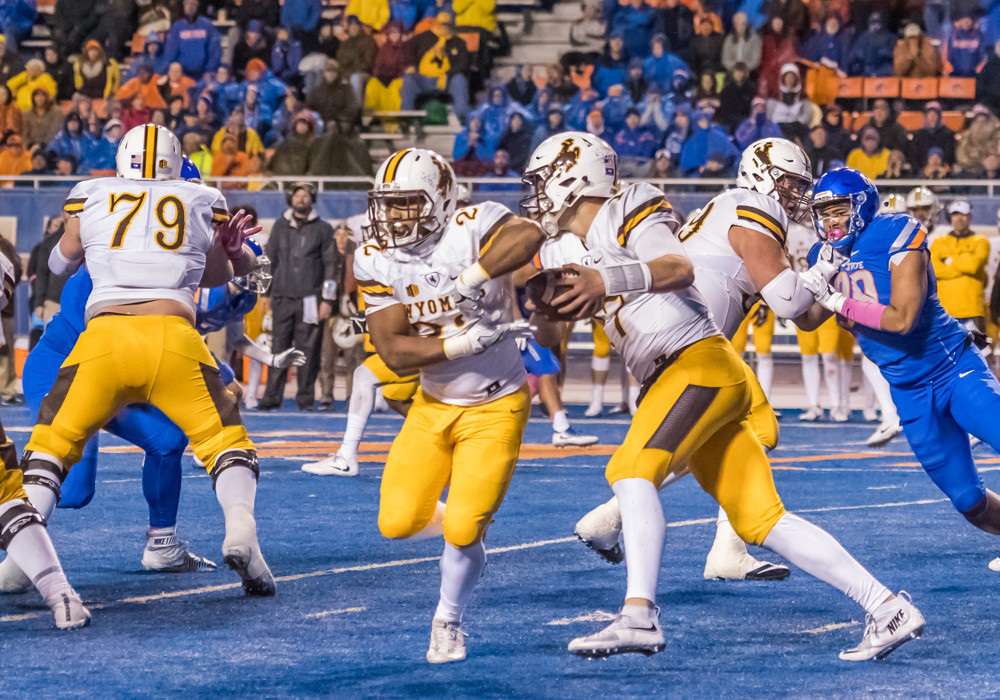 The return of the Run-and-Shoot, a fourth and goal touchdown, a last-second field goal win, and a two-punter formation is what we got in Week Zero of this season and it’s hard not to be excited about what’s to come this season. With four Week Zero games in the books, which players have cemented themselves as preseason legends? Justin Heisey gives in-depth analysis in a standard .5 PPR format all week-zero team for the 2018 season.

Ready to add College Fantasy Football to your course load? Head on over to Fantrax and join a league today!

For the second straight year a Hawaii quarterback makes the All-Week-Zero team. Cole McDonald was only a flyer player going into the season but after throwing for 418 yards, rushing for 96 yards, and scoring five touchdowns he just might be the hottest add going into Week 1. McDonald’s style of play looks similar to that of Eric Dungey and he could be the waiver wire add that changes everything going into the season. The Run-and-Shoot looks like it’s made for a quarterback like McDonald and he is going to score like crazy this season because of it.

After some uncertainty for the Wyoming football season, it appears that Nico Evans will be the focal point of the Cowboy’s offense this season. Evans was the most effective back for Wyoming against New Mexico State with 190 yards and two touchdowns on 25 carries. It doesn’t appear as though quarterback Tyler Vander Waal will be whipping the ball around like Josh Allen did a year ago leaving Evans as the breadwinner for the offense. Evans’ teammates like him as the guy this season and it appears that he is going to solve the ground game problem they had last season.

I’m not usually high on triple-option players as fantasy players, but these are the types of guys that are reliable as fantasy studs. For a triple-option player to be fantasy relevant, they must get the bulk of the carries to a point where it’s obvious he’s getting the ball and guys like Keenan Reynolds, Malcolm Perry, and Zach Abey have all proven that at Navy and TaQuon Marshall looks to be that guy for Georgia Tech. Emmanuel Esukpa toted the rock 32 times this weekend against Prairie View A&M for a total of 173 yards and a score. If Esukpa can continue to see this kind of action from week to week he could be a severely underrated player for the 2018 season.

I had talked up Preston Williams all offseason and even had him as my No. 13 ranked receiver in my Top-50 receiving rankings. It was confirmed that Williams is the next guy in a line of receivers at Colorado State that includes Rashard Higgins and Michael Gallup when he caught nine passes for 188 yards and two scores in a thriller against Hawaii. KJ Carta-Samuels really found his groove in the second half and if he can keep targeting the Tennessee-transfer like this, then Williams could finish as a top-10 or maybe top-5 receiver this season. If, for whatever reason, Williams isn’t taken in your league you need to snag him up immediately.

There’s really not much I can say about Andy Isabella that we don’t already know. The Minutemen played two quarterbacks against Duquesne and Isabella was still able to catch two touchdown passes and actually run one in for his third score. He only caught five passes but the 48-point win may have been the reasoning behind this. Even with a smaller number of targets, Isabella was still able to go for 130 yards before sitting down for the day. The only thing we really learned about Isabella in Week Zero is that he is still an incredible player.

I’m kind of cheating here by having Cedric Byrd over Olabisi Johnson here, but I feel it’s important to mention him. Cedric Byrd, for starters, was universally unowned going into this season but is already seeing his ownership spike to 20 percent going into next week. Byrd caught 11 passes for 181 yards and a touchdown. John Ursua seems to be the red zone target for Hawaii but Ursua caught five fewer passes than Byrd, making the JUCO-transfer a hot add in PPR leagues. If you’re shallow at receiver and want a guy with top-20 upside to bolster your group, snag Byrd and thank me later.

One reason I wanted to watch UMass this weekend was to see which Tight End stepped up for the Minutemen. Last season, Penn State-transfer Adam Breneman was the second leading receiver for UMass with 64 receptions and over 700 yards. Kyle Horn has taken over as the starting tight end for UMass and has a high ceiling if he is utilized as the No. 2 receiver or the Minutemen.

Hawaii’s offense is going to be so much fun this season and if you like to have a good kicker on your roster, why not draft the guy that only made one field goal all last season. Ryan Meskell tripled his season numbers from 2017 in one game in 2018 and the way the Warriors played on Saturday leaves many to believe that it’s not going to stop anytime soon.

Also, be sure to tune into the weekly “CFF: On Campus” Podcast featuring Justin Heisey, John Laub (@gridironschol91), and Scott Bogman (@bogmansports) on Soundcloud or iTunes.

Be sure to check out previous articles by Justin Heisey