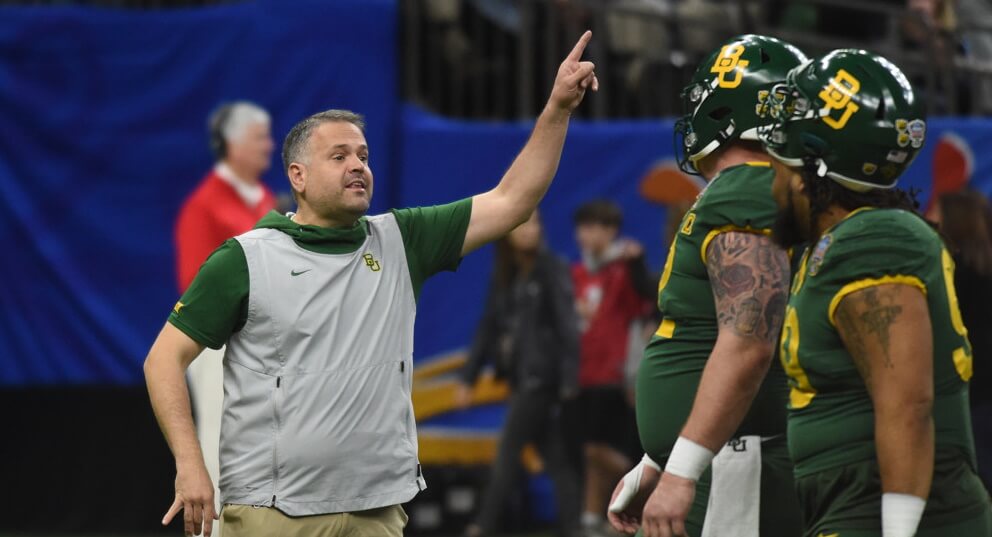 Both of these coaches are coming from the college ranks with Matt Rhule from Baylor and Joe Brady from LSU. Both schools had potent offenses in recent years, but how will that translate to the NFL? The Panthers also added Teddy Bridgewater at quarterback, and he’s usually been an accurate quarterback. Last year, the Panthers ranked second with 39.6 pass attempts per game.

When we look at Rhule’s coaching career at Baylor and Temple, he turned both programs around. At Baylor, they went from 1-11 in 2017 to 7-6 in 2018, and 11-3 in 2019. Then with Temple, they went from 2-10 to 6-6, and then consecutive 10 win seasons. Rhule also has a connection with new wide receiver Robby Anderson from their days at Temple. Here’s a quick look at the offensive history from Rhule’s time at Baylor.

You’ll notice improvements in points per game and rushing yards per game. It’s also important to note that they had a mobile quarterback in Charlie Brewer, who rushed for over 300 yards during the 2018 and 2019 season. The Panthers hope Rhule can help shift the team to be more offensive-minded rather than a defensively focused team under Ron Rivera. We’ve seen Rhule rebuild a couple of college football programs, so let’s see what he can do with the offensive talent on the Panthers.

It’s yet to be determined whether Stefanski or Alex Van Pelt will call the plays. There’s little offensive coordinator data on Van Pelt since his only other stint was with the Buffalo Bills in 2009. If Stefanski calls the plays or the Browns take on the offensive tendencies of the 2019 Vikings, then we could see a run-heavy approach by the Browns. That would be great news for Nick Chubb and Kareem Hunt.

However, I will note that last season, Kirk Cousins was efficient and ranked seventh in production premium on Player Profiler. Cousins has also shown to be extremely accurate, but Baker Mayfield hasn’t been that accurate. Cousins’ 76% true-completion rate ranked fifth, and Mayfield’s 64.2% true-completion rate ranked 34th last year. If the coaching changes help Mayfield’s accuracy and efficiency, then their pass catchers could also be productive and efficient.

Former Green Bay Packers coach Mike McCarthy is now the head coach of the Cowboys. When looking back at his final two years with the Packers, there were mixed results from their offense. The Packers ranked 27th in rush attempts and 14th in pass attempts per game in 2017, but Aaron Rodgers only played seven games due to injury that season. In 2018, the Packers ranked 32nd in rush attempts and third in pass attempts per game.

McCarthy retained Kellen Moore as their offensive coordinator, so that’s good news for the Cowboys offense. The Packers ranked top-9 in passing yards per game and top-4 in pass attempts per game in 2016 and 2018. Does this mean the Cowboys become a more pass-heavy offense? Or will there be few changes from last year since the Cowboys were successful on offense?

With Moore as the offensive coordinator, the Cowboys ranked ninth with 28.1 rush attempts per game and 11th with 37.3 pass attempts per game. They have one of the best running backs in the league in Ezekiel Elliot, so it’s hard to see them bumping up the pass attempts dramatically. Let’s hope they keep the balance on offense.

If we go back to Garrett’s last season as a full-time offensive coordinator in 2009, the Cowboys ranked top-8 in passing yards and rushing yards per game. That year they had Tony Romo at quarterback and Marion Barber and Felix Jones leading the backfield. I expect the Giants to have a bit more balance on offense. Last year they ranked 29th in rush attempts and eighth in pass attempts. Saquon Barkley missed games due to injuries last year, so they should run the ball slightly more in 2020.

Like the Giants, the Panthers passed the ball a ton last year with Ron Rivera as head coach. Part of the reason being the Panthers ranked 24th allowing 374.5 yards per game on defense. However, the Washington Football Team appears to be in a similar situation as they allowed 385.1 yards per game on defense that ranked 27th. Typically teams with weak defenses throw the ball often, but last year Washington averaged 29.9 pass attempts per game that ranked 28th.

Since Cam Newton missed most of the 2019 season, last year could have been an outlier for the Panthers offense in terms of passing volume. Scott Turner was also the Panthers offensive coordinator last year, so he’s following Rivera to Washington. Under Rivera, the Panthers typically ran the ball more often, but that included a mobile quarterback in Newton. I would anticipate the passing volume to increase for Washington. If there’s increased production from Derrius Guice and the running backs, then their offense could take a slight step up as a whole.

The Bears new offensive coordinator Bill Lazor most recently worked as the Bengals offensive coordinator in 2017 and 2018. Lazor has a connection to quarterback Nick Foles from his days as the quarterbacks’ coach with the Eagles in 2013. When they both worked together, Foles started 10 games, completed 64% of his passes with 2,891 passing yards, 27 touchdowns, and two interceptions.

Supposedly, the starting quarterback job is up for grabs between Foles and Mitchell Trubisky, although Foles appears to be the better option. Last season, the Bears ranked 26th in passing yards and 27th in rushing yards per game. Under Lazor, the Bengals offense typically finished in the bottom half of the league, so I’m not anticipating this offense to take a massive jump up.

For the past two seasons, Pat Shurmur served as the Giants head coach, and now he’s the offensive coordinator for the Broncos. Shurmur also served as the offensive coordinator for the Vikings. During those four years, the Vikings offense tended to be pass-heavy outside of 2017. In 2017, the Vikings rushing offense ranked in the top-10 in terms of rushing attempts and rushing yards per game. In the other three seasons, the offenses under Shurmur ranked top-11 in passing attempts per game. Maybe this means Drew Lock and the passing game improves in 2020?

Chan Gailey hasn’t coached in the NFL since 2016 when he was an offensive coordinator for the Jets. Gailey and quarterback Ryan Fitzpatrick worked together in 2015 when Gailey was the Jets’ offensive coordinator. In 2015, Fitzpatrick threw for over 3,900 yards with 31 touchdowns and 15 interceptions. He also chipped in 270 rushing yards and two touchdowns. In this same season, Brandon Marshall and Eric Decker both passed the 1,000 receiving yard mark with 14 touchdowns for Marshall and 12 touchdowns for Decker. Running back Chris Ivory also rushed for over 1,000 yards and seven touchdowns that season.

Gailey’s known to use a spread offense, which would fare well for rookie quarterback Tua Tagovailoa and using the run-pass option. Regardless of Fitzpatrick’s age, he’s still shown mobility in the rushing game while leading the Dolphins in rushing yards last year, and that’s not a typo. Overall, this should be one of the positive coaching changes for fantasy football.

Like Gailey, Gary Kubiak hasn’t coached in the NFL for several years. Kubiak last served as the head coach for the Broncos during the 2016 season. However, I will note that Kubiak was an offensive advisor for the Vikings last year, so he was close to the team. According to an article on Vikings.com by Lindsey Young, Kubiak plans to continue to use a run-focused approach with an elite running back in Dalvin Cook. That’s good news for the Vikings running game but could also help efficiency and production in the passing game. This should be one of the more intriguing coaching changes for fantasy football.

Kevin O’Connell is now the offensive coordinator for the Rams. However, head coach Sean McVay calls the plays, so I doubt anything changes.