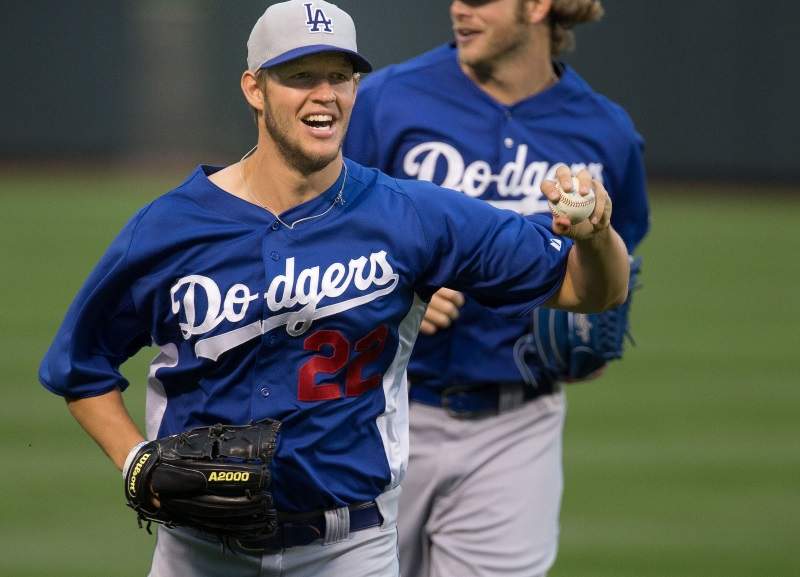 Clayton Kershaw has been the talk of fantasy baseball, and not for good reasons, as the Dodgers’ ace continues to battle a left shoulder injury early in spring training.

Kershaw, who started just 74 games the past three seasons due to nagging back and biceps issues, is now suffering from ongoing shoulder soreness. The 30-year-old, three-time Cy Young Award winner was shut down last week, but resumed playing catch Monday, only to leave the session “(not feeling) great”. Manager Dave Roberts is optimistic Kershaw will resume throwing shortly, but that leaves early drafters in a bit of a pickle.

Where Do You Draft Clayton Kershaw?

Kershaw is currently the 32nd player off the board in Fantrax drafts, and that seems too high. Even setting the injury — and the ambiguity of said injury — aside, Kershaw was already trending down after experiencing a dip in velocity last season.

In 2018, Kershaw’s fastball barely averaged 90 mph, leading to his highest contact rate and lowest strikeout rate since his rookie season. Without knowing the severity of his injury, it’s difficult to draft Kershaw unless there’s extreme value to be had, which would mean he’d have to drop at least a couple more rounds. The industry-wide, 315-team TGFBI (The Great Fantasy Baseball Invitational) that begun Sunday, has offered some interesting examples of where Kershaw is being drafted, wherein one league he slid all the way to the seventh round.

Kershaw is one of the greatest starting pitchers of all time, but owners shouldn’t let that sway them into reaching for the oft-injured star, as there are many dependable pitchers you can take in the same range. Elite arms like Luis Severino, Trevor Bauer, Noah Syndergaard, Patrick Corbin, and Kershaw’s teammate, Walker Buehler, are safer bets and still on the board at that time.

Speaking of shoulder injuries, Brewers starter Jimmy Nelson is aiming to return this year after missing all of 2018, but there have been some bumps along the way.

General arm “fatigue” is said to be the reason the Brewers are halting his throwing for a little bit, but this is a “buyer beware” notice for fantasy baseball owners. Nelson tore his labrum in 2017 and hasn’t pitched in a game since September 8 of that year. I’m the leader of the “avoid players with shoulder injuries” club, so I always try to steer readers clear of players who fit that bill.

Nelson showed a lot of promise in ’17, posting a 3.49 ERA (3.05 FIP) and 199 strikeouts, and his 20th round ADP offers very little risk, but you shouldn’t be relying on him to be a major contributor to your fantasy team; any positive stats will be a bonus.

For Whom the Odubel Tolls

Phillies manager Gabe Kapler revealed outfielder Odubel Herrera is dealing with a Grade 1 hamstring strain. This is the lowest severity of strains, but we all know how much they can linger. The main issue is the time off could allow Herrera to be Wally Pipp’d in the Philadelphia outfield, notably by Roman Quinn.

Quinn hit .362/.383/.586 in August before falling off a cliff in September, though that could be attributed to playing with a fractured foot all month. Herrera himself had a disastrous second half, tallying just 19 RBI with a .622 OPS after turning some heads with a 16-homer first half. Quinn’s speed alone could make him more valuable from a fantasy perspective since Herrera doesn’t run and offers a meager slash line with mediocre power numbers.

How much do you downgrade Clayton Kershaw and other already injured players? For more great rankings, strategy, and analysis check out the 2019 FantraxHQ Fantasy Baseball Draft Kit. We’ll be adding more content from now right up until Opening Day!