Where do you Draft Chris Sale in 2020 Fantasy Baseball? 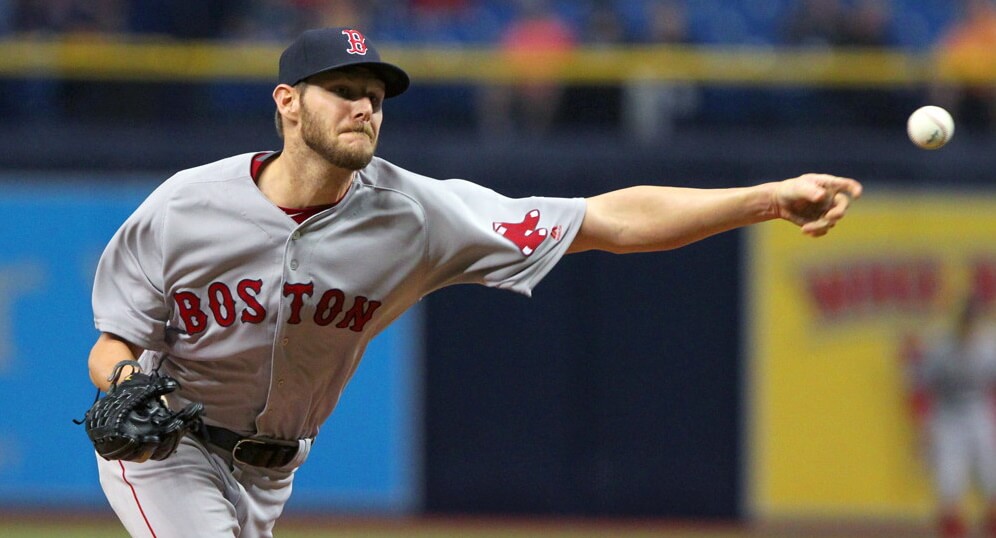 In 2019, Chris Sale failed to finish the season as a top-12 fantasy starting pitcher, per Baseball Monster’s Roto rankings. It was the only time in eight years as a starter that Sale did not reach that mark. Is this the beginning of the end for one of the most dominant pitchers in recent memory? Or can Sale return to the form he exhibited through much of the past decade? For now, owners seem a bit hesitant to go all-in on Sale heading into 2020. He is currently going as the 11th starting pitcher off the boards in drafts, with a current ADP in the back half of the fourth round. Below I will explain why I believe Chris Sale is a considerable value at that price.

In five seasons as a starter in Chicago for the White Sox, Chris Sale averaged over 200 innings per season while amassing a 3.04 ERA. The former first-round pick posted a K/9 rate just north of 10.0. That was good for 12th among 227 qualified starters over that span. The White Sox traded Sale to Boston in December of 2016 for a package of prospects including Yoan Moncada and Michael Kopech.

Sale paid immediate dividends for his new club and was more dominant than ever in his first two seasons in Beantown. He led all hurlers with at least 150 innings pitched in strikeout percentage (K%) and strikeout-minus-walk percentage (K-BB%) in both 2017 and 2018. In 2017, Sale became just the third pitcher this century to eclipse the 300-K threshold in a season. He added a 2.90 ERA and 0.97 WHIP for good measure. The lanky lefthander was arguably even better through July of 2018 before things began to take a turn for the worse.

Sale had just started for the American League in the 2018 All-Star Game and was dominant in four July starts. He allowed a total of one total run and struck out 44.7 percent of batters faced. But the Red Sox then put their ace on the shelf with what was deemed “mild shoulder inflammation”. Sale allowed a mere single over five scoreless innings upon his return, striking out 12 in the process. However, he was once again forced to miss time due to inflammation. This time he missed a month of action. When he returned, Boston was simply trying to ramp up his activity before the 2018 postseason. Sale threw just 12 innings over his final four tune-up starts. Despite essentially missing two months of action, Sale still ended 2018 fourth among starters in WAR and as the overall SP5 in Rotisserie formats.

Offseason tests showed no structural damage to the southpaw’s shoulder, which alleviated many concerns heading into 2019. He appeared healthy in Spring Training but made just two starts. Once the regular season began, however, Sale was not the dominant force we had grown accustomed to seeing. By the end of April, he sported an unseemly 0-5 record and 6.30 ERA. Things got better from then on, but Sale remained highly inconsistent throughout the year. He struck out 51 batters over a four-game stretch in May but allowed five or more earned runs in six of his final nine starts before once again succumbing to the Injured List due to left elbow inflammation. He would not pitch again in 2019, finishing the year with a 6-11 record to go along with an ERA (4.40) that was nearly a full run higher than his previous career-worst (3.41, set in 2015).

In a word, plenty. Sale’s velocity was way down to start the year, presumably as a result of his previous injury and having limited action heading into the beginning of 2019. His average fastball velocity before the injuries took effect in 2018 was sitting between 96-98 MPH. In those first six starts of 2019, he was sitting at 92-93 MPH. His secondary pitches were also considerably slower than they had been the previous season. His velocity improved slightly in subsequent months, but he never regained the velocity he had in 2018. When all was said and done, Sale lost nearly 2 MPH on both his four-seam fastball and changeup compared to 2017 and 2018. That difference allowed hitters an extra nanosecond to gear up, and they took advantage. Look at the home runs allowed by Sale in 2018 as opposed to 2019: (Charts courtesy of baseballsavant.mlb.com/.) 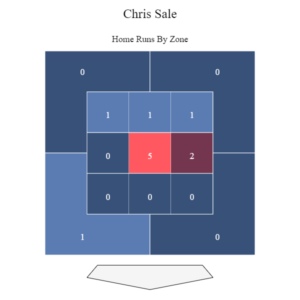 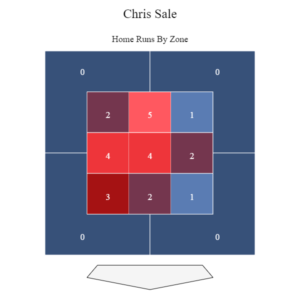 In 2018, Sale rarely allowed long balls. When he did, it was usually because he grooved a pitch over the heart of the plate or up in the zone. Those occurrences were few and far between, as Sale gave up just 11 round-trippers in 2018. Last year, however, that number more than doubled despite Sale facing five fewer hitters. Of course, Chris Sale is not the only pitcher to see a dramatic uptick in the number of home runs allowed in 2019. But, altered baseballs aside, I would submit that the reduced velocity played as much as (if not a greater) part in Sale suddenly seeming human in 2019. All told, Sale served up 1.47 HR/9 and a 19.5 percent HR/FB rate last season. These were far and away the highest of his career. The same holds for his 36.3 percent hard-hit rate, as illustrated below: 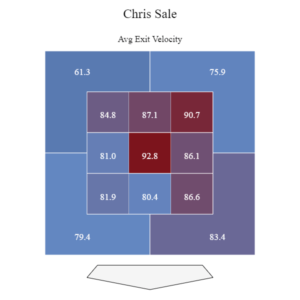 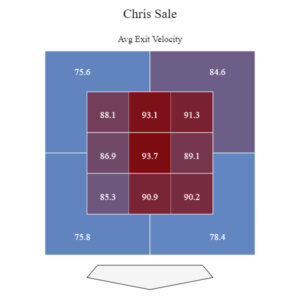 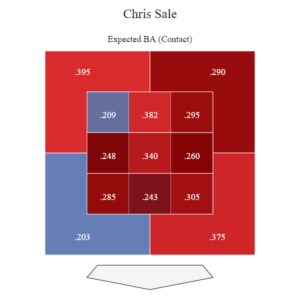 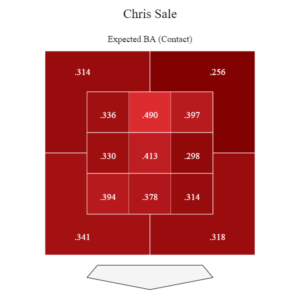 The first picture represents the opponent’s average exit velocity against Sale in 2018. The second picture is the data from 2019. As you can see, hitters had a higher exit velocity in all nine areas of the strike zone in 2019, as well as above the zone. It should come as no surprise then that xBA (expected batting average) was also higher in all nine zones. The actual results bear that out as well. After hitting just .180 against the fastball from 2017-2018, opponents hit .217 against Sale’s four-seam fastball in 2019. Sale also allowed 12 home runs via the fastball last year, more than he had allowed in all of 2018. The changeup also proved less effective. Opposing hitters hit .279 and slugged .523 against Sale’s changeup in 2019, a far cry from the .228/.329 numbers posted in 2018.

Perhaps as a result of his diminished velocity, Sale threw more sliders than four-seamers last year. It was the first season in which his slider was the pitch he threw most frequently. The slider was still his most effective offering, but it was also not quite as dominant as prior versions. Opposing batters hit .197 against the slider in 2019. Strange as it may seem, that is the highest batting average allowed by Sale against the slider in any given season in his career. Sale also struggled with runners on base. Opponents hit .261 and slugged .507 with men on. Those were the highest numbers allowed by Sale in that department in any season. For reference, the opposition hit just .144 and slugged at an anemic .219 in similar situations in 2018. As a result, his LOB (left on base) percentage was a – stop me if you’ve heard this before -career-worst 66.7 percent.

Despite all the career-worsts and career-highs in 2019, Chris Sale still finished the season as the SP42. That may not be what fantasy owners had in mind last March, but that put him above the likes of Marcus Stroman, Zack Wheeler, and Robbie Ray. He also showed enough flashes that he still has what it takes to be considered a fantasy ace. Sale remained an elite strikeout artist in 2019. He struck out 13.32 hitters per nine innings and fanned 35.6 percent of hitters, trailing only Gerrit Cole among pitchers who threw at least 100 innings in both of those categories. He finished fourth in K-BB%, and inside the top-20 in both O-Swing (chase percentage) and swinging-strike rate. Those metrics are reflected in his 2.93 xFIP (third-best among starters) and 3.00 SIERA (fourth-best).

First, let’s discuss Sale’s elbow. There were whispers that Tommy John Surgery was a possibility, particularly after famed surgeon Dr. James Andrews was consulted. However, the injury did not appear as drastic as initially feared. Sale had a platelet-rich plasma injection in August. A follow-up visit in November deemed Sale ready to begin a throwing program. All signs currently point to Sale being on track to be ready for Spring Training. As I mentioned at the top of the piece, Sale is currently going in the fourth round in 12-team drafts, 11th among starters. I believe the time to invest in Sale is now. I expect reports regarding his health to remain positive up to and throughout Spring Training. If that is the case, his ADP will be a full round higher come March.

Chris Sale will still be just 30 years old on Opening Day. It’s not as if we are talking about a pitcher with nothing left in the tank. As far as the drop in average velocity is concerned, my inclination is that Sale had to adjust to his decreased velocity on the fly last season once it became apparent that he could not quite ramp it up as he had in previous years. That likely led to some of the inconsistencies we saw from Sale throughout the 2019 season. I expect him to head into 2020 with a better idea of how to attack hitters and make the necessary adjustments if his heater continues to top out in the mid-90s.

Perhaps comparing Sale’s 2019 numbers primarily to those from 2018 is a bit unfair. After all, he had been an elite starter throughout his career. Having said that, I believe his final production in 2020 will much more closely resemble that of 2018 than 2019. I expect Sale’s 2020 season to look a lot like Max Scherzer’s 2019 campaign. Scherzer had what many deemed to be a disappointing 2019 in terms of fantasy production. He performed at a level slightly lower than we are accustomed to seeing, finishing with career-lows in starts (27) and wins (11). Yet he still finished the year as a top-10 starting pitcher in Roto. Mad Max ended the year with a 2.92 ERA, 1.03 WHIP, and 12.69 K/9. Expecting a full return to 2018 levels may not be realistic, but he should still be an SP1 whenever he is on the mound.

I would be quite comfortable selecting Sale at his current price, and personally feel he should be drafted in the back half of the third round. Pairing him with a high-end SP2 such as Blake Snell, Patrick Corbin, Clayton Kershaw, or Lucas Giolito would be a sound strategy. I would not spend too much time worrying about the possibility of Sale missing the occasional start here and there. True workhorses are few and far between nowadays anyway. There have been just 11 total 200-plus inning seasons recorded in the last three years. Chris Sale is the type of pitcher who can be an elite fantasy starter even if he throws just 150-160 innings. In Best Ball formats, I would be willing to spend a top-30 pick on Sale. There are but a handful of pitchers who possess Sale’s upside on a per-start basis.