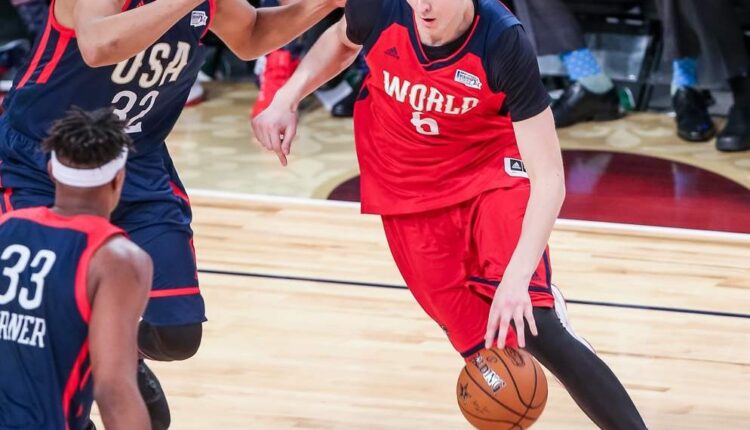 In my opinion, Center is one of the more thin positions to find value in fantasy basketball. This year, however, the position is full of viable fantasy talent. It’s our job to make sure you find those diamonds in the rough, and win your leagues. Let’s take a look at potential Center Sleepers for this year’s draft.

He’s been growing a beard that looks foreign on him. A metamorphosis is coming, my good people. The risk for drafting Porzingis is that he’s played 60 games only twice in his entire career. That’s what should keep his price low, however. There will be load management. There will be injuries. But when he’s playing, he can give you 22/9/3 and 2+ stocks, like he did last year for the Wizards. His 31% usage rate will likely come down with Beal back in the picture, but not by much. Porzingis is a beast. It’s undeniable. If he’s still on the board for you in the middle rounds, he should be snatched up!

Admittedly, this is blind faith based on what I saw from Kessler in college. He didn’t play in Summer League, and he’s going to walk into a role devoid of Rudy Gobert, and immediately have a chance to get minutes and make an impact. The big kicker for him in a points or category league is that he averaged 6 stocks in college. SIX!! That’s a monster number, and if you couple that with even average production scoring, and on the boards, then he can make a huge difference for your fantasy team.

The Suns have a very weird thing going on with DeAndre Ayton. They told him to his face that they didn’t think he was worth a max deal. Then they benched him in the playoffs… and lost. Then he tested restricted free agency and got his mini-max offer matched by the Suns. So now he’s stuck in a situation we know he doesn’t want to be in, and he can’t be traded until January. Yikes. Lucky for you, you’re going to draft Dario Saric. He’s coming back from a torn ACL, and as someone who has career highs of 32/17/9, there’s no doubt in my mind that when thrust into a starting role, he has the skill set to provide a return on your (small) investment.

Got a few center sleepers of your own? Drop some names in the comments below and then check out our full 2022-23 Fantasy Basketball Draft Kit!