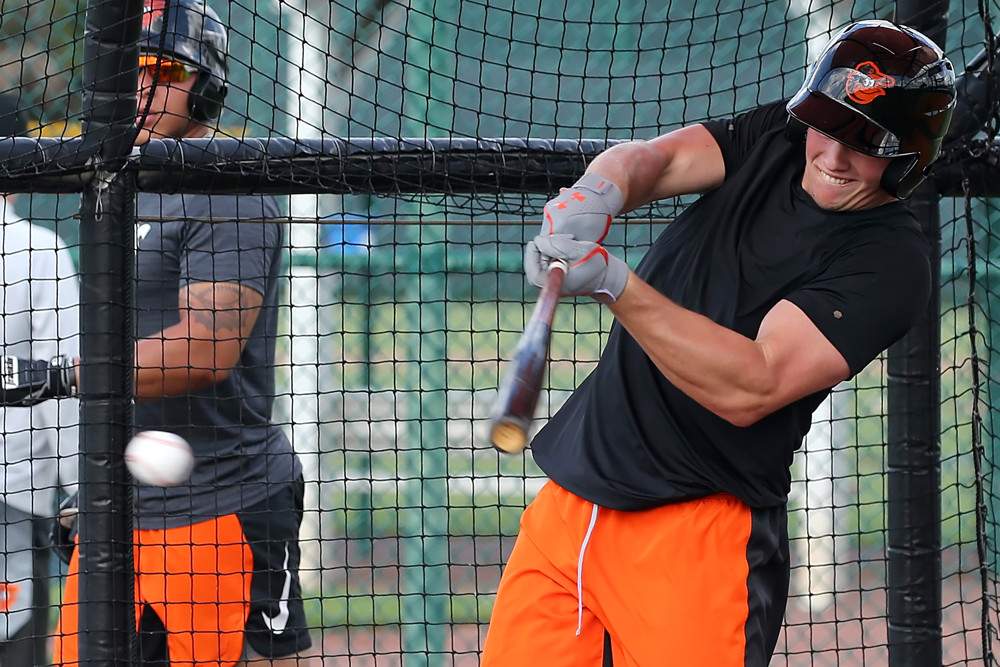 As we’ve all experienced playing fantasy baseball, the catcher position is often highly frustrating. Most catchers struggle to hit for a respectable average, and mostly, we’re looking to play the hot streaks throughout the season as there are few locked-in full-season options anymore. But could that be changing in the near future? The current crop of catching prospects is the most intriguing bunch as a whole that I’ve written up in several years with several of them possessing top-10 fantasy catcher upside. Leading the way in my top-30 dynasty catcher prospect rankings is a former Beaver with C1 upside within the next few years. And when I say C1, I mean THE C1.

There is zero debate about who the top catching prospect in the game is, for both real-life and in fantasy. Adley Rutschman is the best all-around catching prospect we’ve seen in quite some time. In addition to his gold-glove caliber defense, Rutschman possesses a plus hit tool with plus or better power from both sides of the plate. The last time we saw a catcher hit .280+ with 25+ home runs in a single season was Joe Mauer back in 2009. The last time we saw a .300/30+ season for a catcher was Mike Piazza in 2001. Rutschman has the upside to exceed both of those plateaus in time as the likely new top overall dynasty catcher within the next few years.

The gap down to #2 Joey Bart is substantial. Bart possesses similar power to Rutschman, but the hit tool and approach are miles behind. With that said, I don’t expect Bart to be a drag in the AVG department either. His hit tool is close to average and should keep him in the .250-.270 range more often than not. But Bart doesn’t walk a whole ton (6.0% in MiLB), making him less appealing in OBP formats. Regardless, .250+/25 would still make Bart a bonafide top-10 fantasy catcher.

After those two is where it gets really interesting. The 3-8 range here might be my favorite part of the rankings due to all the upside. Austin Wells‘ offensive potential is probably the closest you’ll see to Rutschman at this position, but does he stay behind the plate? That’s to be determined, but Wells’ potential for plus hit and plus power will play anywhere and his left-handed bat at Yankee Stadium makes me drool a bit. Now is an ideal time to try and acquire him in dynasty leagues before his price inevitably skyrockets.

The same sentiment rings true for Francisco Alvarez as well. The arrow next to Alvarez’s name is firmly pointing up thanks to an above-average hit tool and close to plus raw power. Alvarez impressed in his 2019 professional debut, slashing .312/.407/.510 with 10 doubles, seven home runs, and an 11.5% walk rate in 182 rookie-level plate appearances. The upside here is a .280/.350/.500 backstop capable of hitting 20-plus homers annually. Those don’t grow on trees. Right behind him is Heriberto Hernandez who has similar offensive upside, but his defensive home is still a major question mark.

Now, for your viewing pleasure, here is Alvarez taking some guy named Jacob deGrom deep this spring. No big deal.

Here is Francisco Alvarez going yard against Jacob deGrom in a B game. pic.twitter.com/w9YJNxWHiH

The 2020 draft brought a plethora of talent behind the plate with Tyler Soderstrom, Dillon Dingler, Patrick Bailey, and the aforementioned Wells leading the way. I’m a bit higher on Dingler’s offensive capabilities than most, but I truly believe there’s a path to 50+-hit and 55-power here to go with his strong defensive skills. He could wind up as the top overall catcher from this draft. As for Soderstrom and Bailey, their bats are legit, especially Soderstrom. He was one of the best prep bats in the entire 2020 draft class, and one that can hit for a high average and solid power as well. As for Bailey, it took me a bit to warm up to him for fantasy purposes, but reports since the draft have all been positive and he’s shooting up my overall prospect rankings right now.

Speaking of positive reports, that’s been the case with Cal Raleigh of the Mariners. Everyone is talking about the elite talent at the top of this organization, but Raleigh has the chance to be an impact fantasy catcher that won’t cost you a ton to acquire in dynasty leagues right now. The 6’3 Raleigh has slashed .260/.334/.506 in his 673 minor league plate appearances to go along with 35 doubles, 37 home runs, and a 9.7% walk rate.

Two catching prospects I would try to sell high on while you can are Luis Campusano and Keibert Ruiz. This isn’t me saying that they’re not going to be good, but I feel the value they can provide is lower than their current dynasty price tags. Campusano has .270/15 upside but is being treated like a top-100 prospect right now. For me, he’s closer to 150 overall. As for Ruiz, the contact skills and approach are rock-solid, but I don’t see the power ever progressing past the 10-12 homer range annually. Plus, the Dodgers already have an all-star caliber catcher in Will Smith ahead of him and Diego Cartaya coming up behind him who I like more for fantasy purposes due to his power potential.

Now, let’s talk about four names that have recently debuted. One I’m very high on, two I’m lukewarm about, and the last I’m a bit lower on than most. That last one is Tyler Stephenson. While he’s looked good in his first 53 MLB plate appearances, the hit tool looked around average throughout his minor league career and his in-game power always lagged behind. He’s more of a 2-Catcher league option for me. Both Ryan Jeffers and Sam Huff can be back-end starting catcher options due to their power but don’t expect either to hit for a high average.

Alright, let’s get to the recent debut that I’m the most excited about for fantasy purposes. Alejandro Kirk is a hitting machine. In 151 minor league games, Kirk slashed a robust .315/.418/.500 with 17 home runs and 41 doubles. On top of that, he also walked (89) more times than he struck out (60). The upside is here for a .275+/15+ catcher that could flirt with top-5 catcher value in dynasty leagues at some point. The Blue Jays just need to start playing him more regularly.